I was getting it going this morning when the phone rang and that changed my day.

It was my brother Barry who was up in the hills with his dirt bike. He said a big excavator was up in the hills doing forest fire rehab work and I should ride up and check him out to  make sure he does what we want to our place concerning fire rehab before winter sets in. I told him I had to eat yet and come on down the hill to meet me.

Tracking down the excavator

So I ate and he soon showed up. I fueled up the dirt bike and we rode up into the hills following the excavator tracks onto one of our neighbors places, the Goat Ladies place. It took awhile but we finally found the excavator as they were having lunch and not making any noise so it took a bit longer to find them. The CAL fire rehab boss was there too along with the Goat Lady neighbors. I find the Goat Ladies interesting so shot the bull with them and forgot to get an excavator picture before it drove off to do some work up the hill from there.

Eventually the ladies drove off on their quad runner but their big white dog seemed to like to stay with us. They soon came back to get the big dog as we took off to visit with another neighbor, Jim. 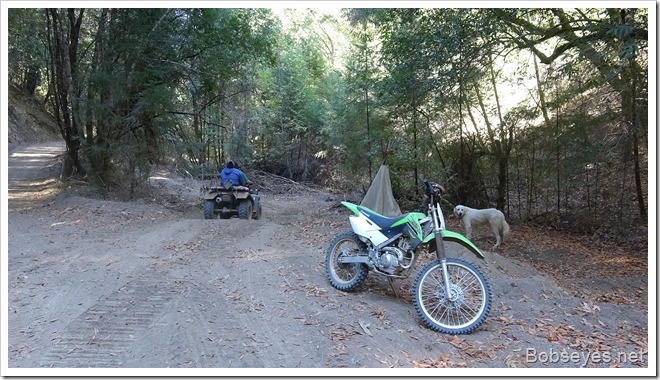 We rode up to check out Jim’s house and talked with him for quite some time.

Then we took off for a dirt bike ride around the hills to check out a few things going down this dirt road. 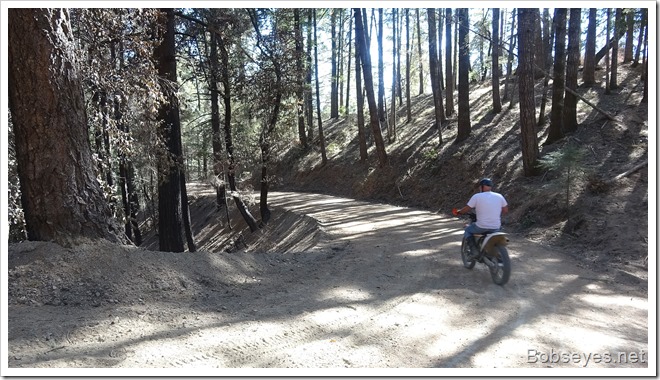 Berry says he’ll meet me at the top of the world and takes off leaving me in the dust. I waited for the dust to settle and took off headed for the Top of the World.

I caught up with Barry sitting under a tree at the Top of the World here. 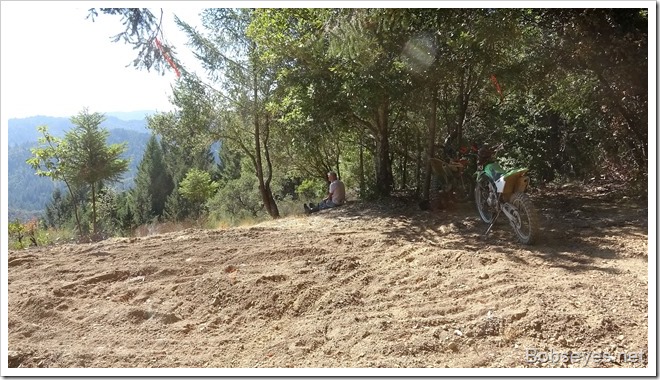 The view from the Top of the World. 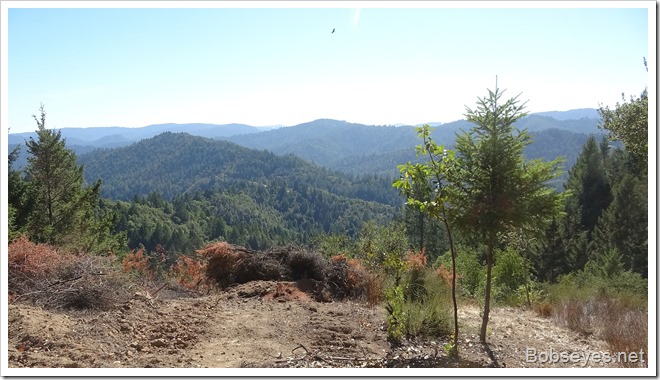 We hung out there for quite some time as the day was real nice.

A bit later we rode on back down the hill and hit my brother Tom’s strawberry patch where we had our fill of berries.

We found enough berries in the weeds to fill us up. 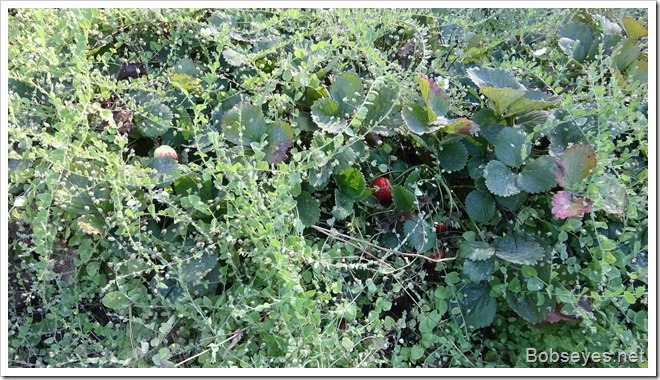 Barry loaded his dirt bike onto his truck and took off for home and I went on home for a nap.

I did a bit of chair hopping and puttering around the yard mostly enjoying the day.

Young birds get to graze

Late in the day I let all the chicken’s out to graze around the yard. Today I let the younger chickens out into the yard for the first time. I usually don’t let the younger chickens out as the hawks can get them but since I was hanging around in the yard I figured they’d be safe and they were except for the one that the spring loaded gate accidentally closed on one young birds leg and penned it until I saw it stuck under the closed gate. I let it out and it limped away but soon appeared to be ok.. So that won’t happen again I put a wire to hook on the gate to keep it open.

Here’s some of  my younger chickens out in the yard for the first time. 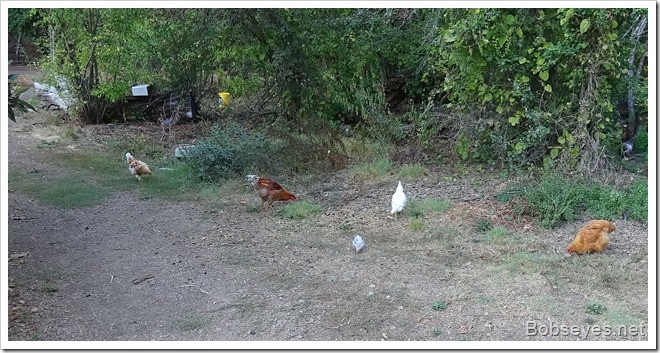 And here’s mix of younger and older chickens out in the yard grazing away. 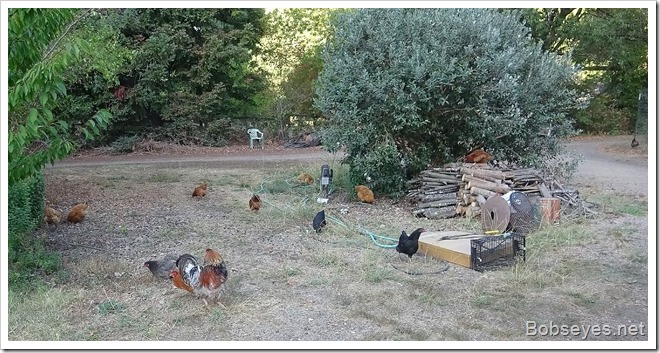 The last time I filled my van’s gas tank on the way home from my recent trip I spotted some gas dripping down from the gas tank as it got full at the gas station and found the input fill hose had a small crack in it and needed to be replaced so today I decided to see if I could get the old cracked hose off.

So I got out my old blanket I lay on and the tools I needed and had a look.

Hard to get off

Here’s where the hose is I need to remove. It’s the larger one and it’s in a tight spot. 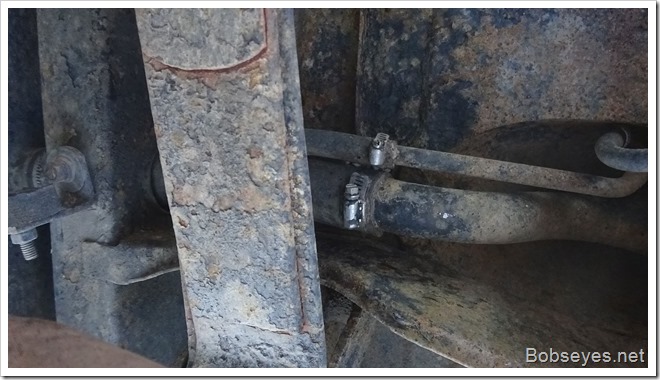 It took some doing but eventually I got the hose off. 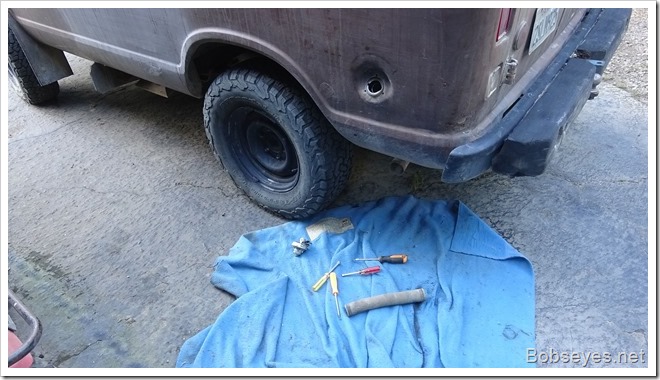 Now that I have the defective hose off I know the size and will order up a new one. I think I’ll try and get a better quality hose as this one didn’t last very long before going bad. I remember installing it not too many years ago and I figure it should of lasted much longer than that. 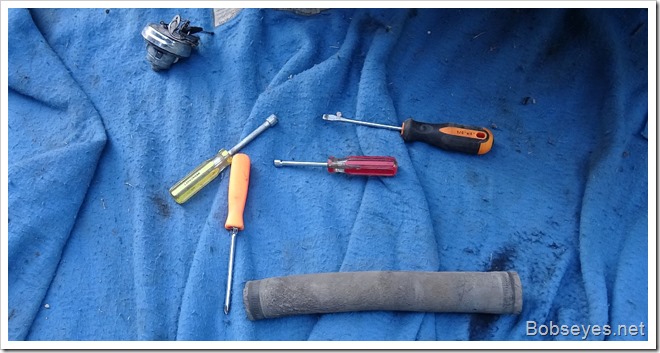 After that I did a bit more chair hopping until it got dark and that was my day.

I have no trouble getting my chickens to come in to the roost at night. Some of them start to come in about an hour before dark especially on cooler days. Warmer days they stay out longer.

Tomorrow the forest fire rehab guys should be on our place so I’ll have to ride back up there to see how they are doing.