Checked the Culvert, Repaired the Gate and Did Research On Food Intolerances

This morning we were getting fairly hard short rain showers so I stayed home and worked on some stuff.

First, I did some vacuuming in my house, until my back was hurting a bit.

Checked out the culvert before the next storm hits

Then I donned my rain coat and walked across the road to check out this culvert that tends to plug up with sticks. 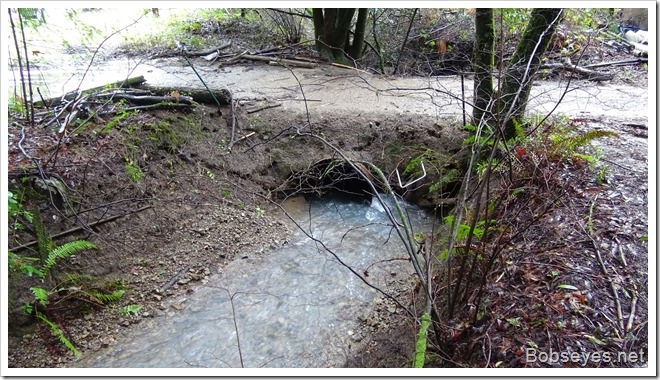 I wanted to make sure no sticks and forest debrie was across the pipe face as there is supposed to be another big storm coming in tonight. Sticks get lodged in the front of the pipe which reduces the flow and it goes over the road which is slowly eroding. I thought there might be more sticks in it from the recent rains, but I’d cleaned it out before and it was still ok, which was good. When it rains hard this little creek fills up to it’s bands. 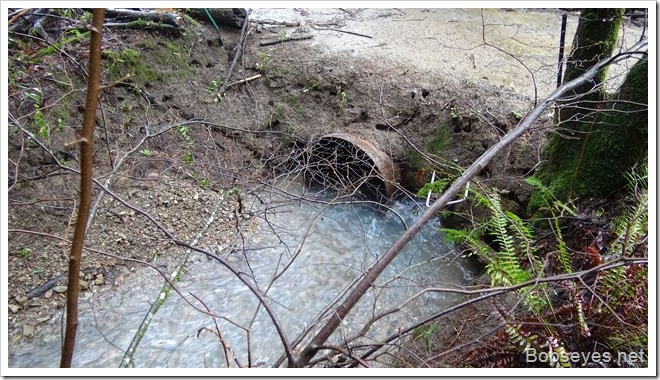 There’s my shovel down there

Here’s the backside of the culvert which gets real turbulent during a rain storm. During the last big storm a week or so ago, I tried to get the sticks out of the front with my shovel. The current was so great I couldn’t get the shovel back out of the front and had to let it go. You can see the hander down there in the water. 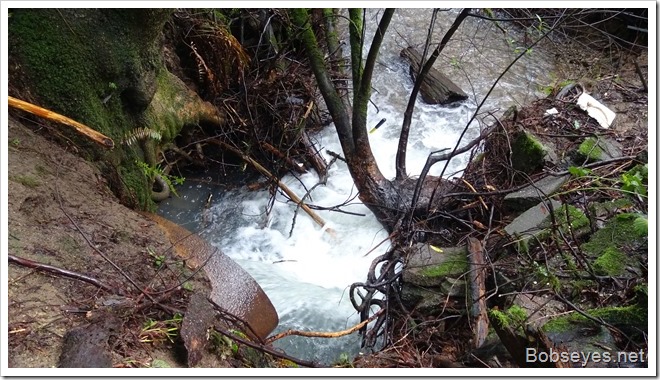 I tried to get it out when the water was a bit lower, but found it the bottom end of it buried in gravel so couldn’t get it out and there it stays. 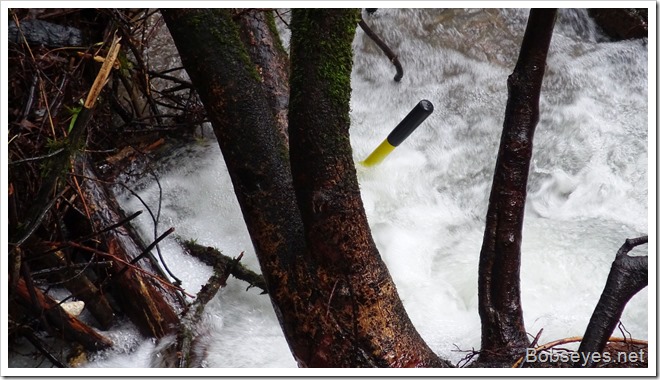 Knowing that was ok, I went back to the house and warmed up a bit.

Put some grease fittings on this gate

Then I decided I might as well see about installing some grease fitting in the wheels on my neighbor’s gate as it’s real heavy and is hard to open and close.

I removed one pulley and took it home to install the grease fitting and them instilled that one and did the other one. 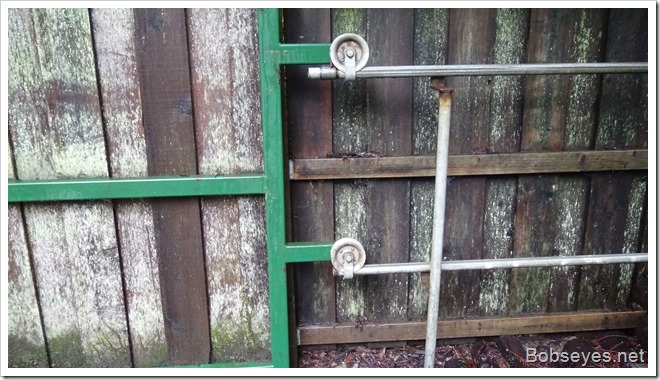 It took me awhile to locate the box of grease fittings I knew I had somewhere and round up the tools to do this, but I finally found enough stuff to get er accomplished.

Here’s one of the wheels with a new grease fitting installed. 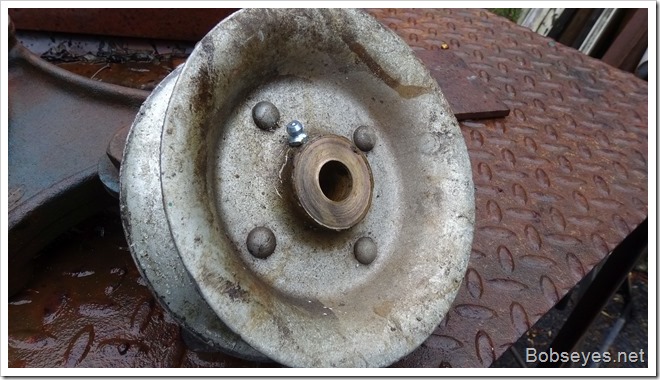 It started to rain as I was putting the last one on so the working conditions weren’t too good.

The gate is still not easy to move

Once I had both wheels back on, I tested the gate out without a lot of improvement. I think the wheel on the bottom of the gate might need some lubrication too, but with the rains coming down more than not, I gave up and went home and put the tools away and went in the house to warm up again.

Researching food intolerances on the internet

With it raining more than not, I stayed in the house the rest of the day and did some research on the internet about allergies, sensitivities and intolerances that deal with food as I’ve had a corn problem with this kind of stuff for over eight years now. It turns out that I’m not allergic to corn and all things derived from corn, but I am intolerant of them which I finally determined about a year ago. Unfortunately, intolerances have no good test to discovery much about it, so I try not to  ingest the stuff, but haven’t been very successful doing that although I’ve been trying for over eight years now. It means I can’t eat or drink at a friends or go out to eat and even when I eat at home I still get hit. All I can do is try to avoid it as much as I can.

There are a lot more articles on this stuff now than there were eight years ago,…….but.

The end result is there is still no cure. There is only abstinence, which is not easy to do with corn as it’s in most of our prepared foods and is also used a lot in most food processing.

I do the best I can but I’m starting to think I might be having some other problems besides just the corn. But with corn stuff everywhere in our food chain, it’s easier to just blame all reaction’s on corn, as there is no way to be sure about anything where corn is involved in our foods.

A couple of corn in our food examples

I’ll give you a simple example. Take apples you buy in the store. Turns out mostly all of them have a thick coat of wax on them. Guess what, none of them even say so, nor can you easily find out what the wax is made from, but most likely it is corn as corn stuff is considered safe for foods. And a lot of other vegetables may have a wax coat too and still it’s not usually mentioned.

Here’s another one you wouldn’t suspect. Iodized salt. Did you know that the iodine has to have a carrier to get it into the salt which is usually dextrose, which is a corn sweetener. And did you know that they use from twenty to fifty percent dextrose in the salt. That means when you salt with iodized salt, you are putting up to fifty percent sweetener on at the same time which would likely require you to put more salt on things to salt them.

How it works, I think

Here’s how it works. I eat and consume some food which has some corn stuff in it. Either before or around nine hours I get hit with real bad itching mostly over my whole body, but worse in the pelvic area.  Now if I eat again, even with known no corn food, I get hit again for up two weeks or so, so it’s hard to determine just what food caused the problem.  In other words, every time I eat I get hit.

Last year about this time I was doing what they call a food elimination diet. That’s where you only eat a few things that you think are cornless and then add one food at a time to see if you get hit. I developed a rather nasty rash over most of my body that finally went away after I eliminated  Olive oil from my diet. You might blame the olive oil, but I would blame the corn stuff that is likely in it. It turns out to get any good oil, you need to buy only cold pressed oil, otherwise you have no idea how it’s processed or what is in has been added to the oil. Turns out bad guys add cheaper oils to olive oil as it’s profitable when olive oil costs, lets say 25 dollars and corn oil costs 5 or 10 dollars a gallon. Easy profit.

So, I’ve been doing the elimination diet again and I’m starting to get the rash again, but not as bad so far. I’m trying to do some things different, but with the nine hour delay and the reaction lasting two weeks or more, patience is mandatory. Itch itch. An itch is called an itch because it has to be itched, no matter what, even though I try not to and then I get torn up. I goop on a lot f Bag Balm and petroleum jelly to keep from tearing myself  up as much as possible.

So that’s why I’m doing more research and I’m afraid the end result is still abstain, but I have to eat something, so I keep getting hit.

I did learn a bunch of stuff about food allergies and intolerances, but nothing that can help out with the problem. The one thing I have learned is I can’t be sure about anything where this is involved. Darn. :O)

The latest storm is just starting to come in now and raining pretty good out there. At least I don’t live on the river so I don’t have to be concerned about getting flooded out.