You can’t always beat the rains

It rained pretty hard all last night, but was letting up when I got it going this morning which was almost noon. There were supposed to be rain showers today, so I got my stuff together so I could drive on down to Jenner to see if I wanted to put my boat in the water.

I drove on down to the overlook to check things out.

The river’s mouth is wide open with lots of muddy water from the rains. 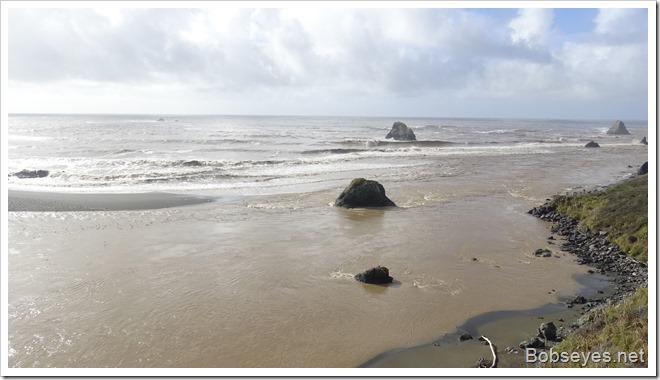 The ocean was pretty rough and breaking over the jetty and the sandy beaches. 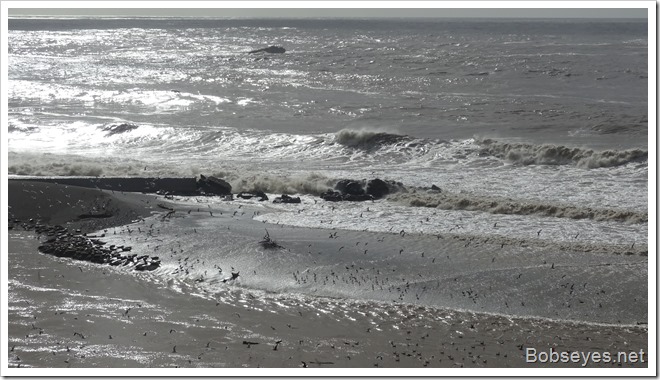 I could see these harbor seals and a lot of birds resting on the sand down there. The birds were mostly seagulls. 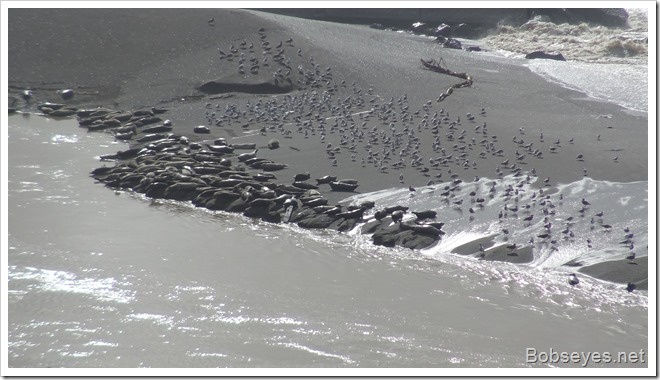 Might as well put the boat in the water

From there I drove on back to the boat ramp and as it looked like a pretty nice day, I decided to put my boat in the water, but didn’t put my rain pants on as things looked like it wasn’t going to rain, but I was wrong about that.

I paddled up along the north shoreline, just enough to get ahead of the island so when I crossed and was carried down the river in the current, I’d still hit the island were I wanted to, near the top end. 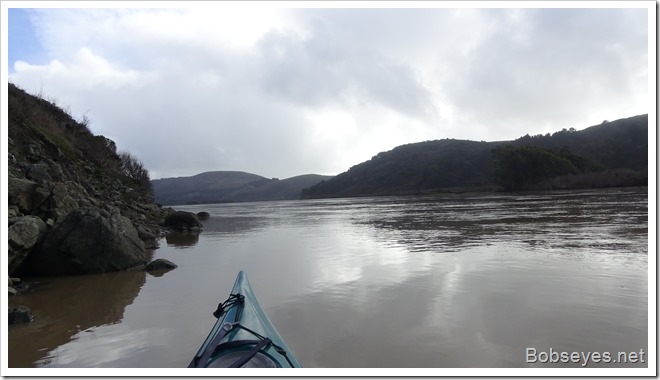 I paddled on down along the islands edge headed for it’s lower end, along here. 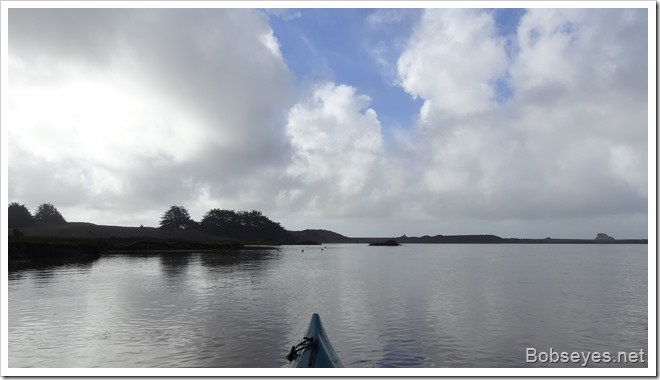 This pair of grebe were fishing near the bottom end of the island as I approached. 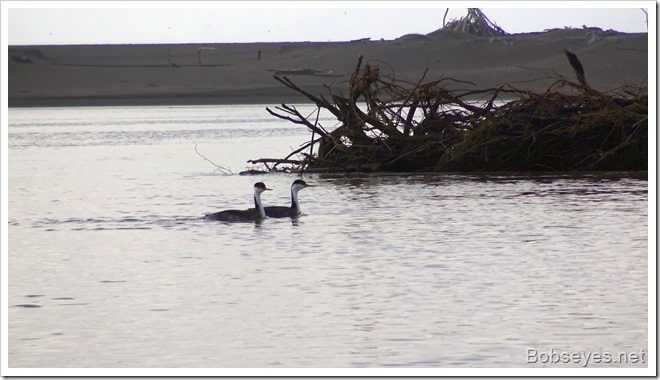 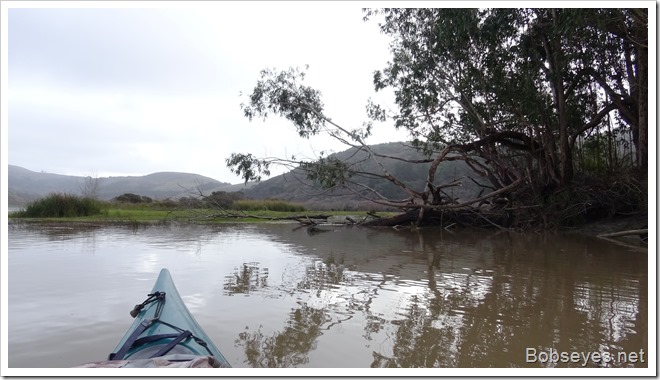 I paddled into the little channel where I hung out for a bit, then moved to the upper most end of the island and had a look here. I could see some rain starting to come in out there, a small shower I was hoping, but I was wrong about that as it turned out to be a cloud burst. 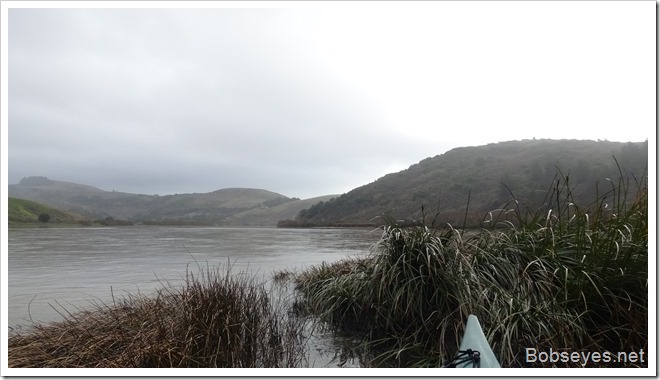 So I thought I better head in for the day to keep from getting wet. I paddled into the current leaving plenty of room to get across and hit the boat ramp, but on the way, it began to rain and then it hailed and a bunch of slush started coming down and I was out in it with no rain pants on, but I did have a rain jacket on. 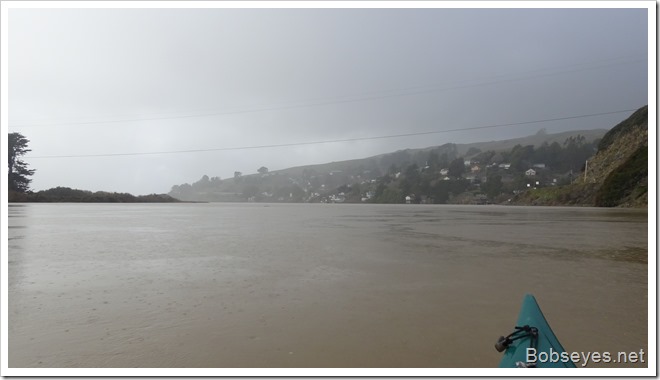 Headed for the tunnel fast

What to do as I was starting to get real wet from the down pour and there were no trees around to get under for protection, so I decided to try and make it to the Jenner Creek tunnel that goes under the road by the café,…….before I really got soaking wet. I could feel the cold water running into my clothes as I paddled fast to the tunnel.

I did get pretty wet, but I made it into the tunnel where it was dry which looked like this. 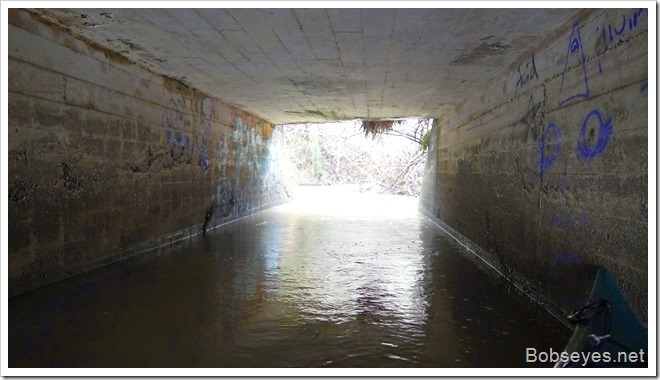 After about ten minutes the rain started to let up, so I ventured back out of the tunnel. 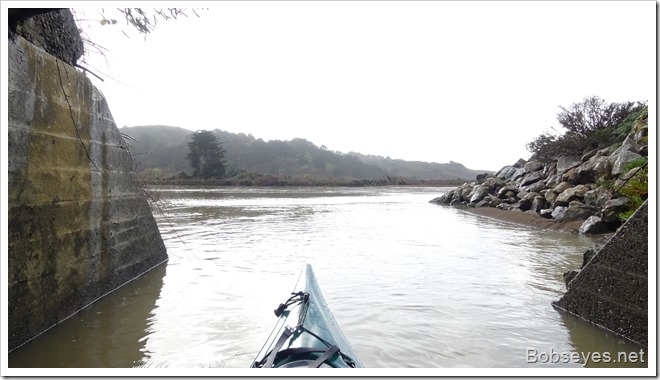 A lady and an otter in the visitor center

And headed on in for the day. I saw the visitor center was open, so I thought I’d go in and take a pic or two of the stuffed otter they had in there. It’s the lightest otter I’ve ever seen. I’d think it might have come from the snow country to be this light. Where it was set up wasn’t a good spot to get pics of it, but here it is. It looks a bit mangy, like maybe it’s been around for a long time. This is a new addition in the visitor center. I should of asked where they got it. 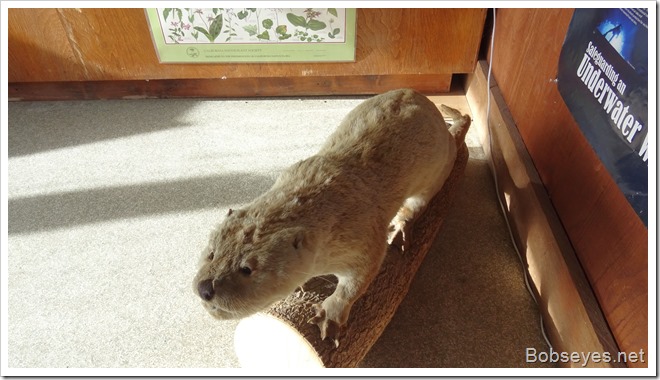 The lady almost blew up :O)

The lady behind the counter was a lady that lived in Jenner so we had a good talk. I talk a lot about the estuary and I could see the lady was getting upset with what I was saying and eventually she said I was aggressive and she was doing her best not to blow up. :O) I tend to be that way when talking about the estuary and what’s going on on the river and explained myself and thanked her for saying something about it and not blowing up. We had a good talk and I left and headed for Monte Rio to check out the boat ramp there to see how muddy it was.

Monte Rio and a guy fishing in the muddy water

It turned out to not be muddy, but only because the water level was up higher than the mud.

I noticed this guy setting up to fish and I saw him fishing down here during the high water a week or so ago, which I blogged about.  So I went down to chat with him. His name was Bill and he turned out to be an interesting guy. 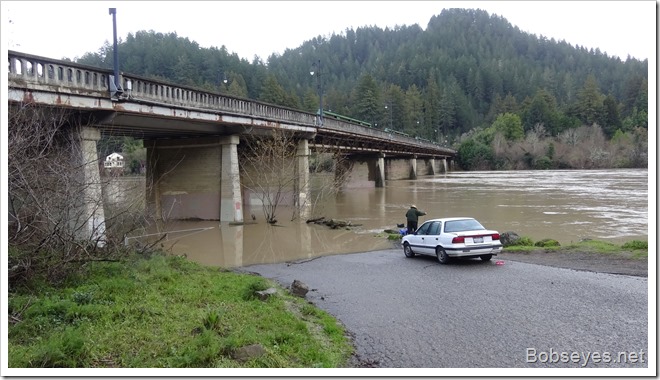 He said he’s caught some hardheads and one day he thought he might have had a steelhead on, but it broke his line, so he wasn’t sure. Only those who put a hook in the water can catch fish, so at least he had a chance, even with the muddy water. 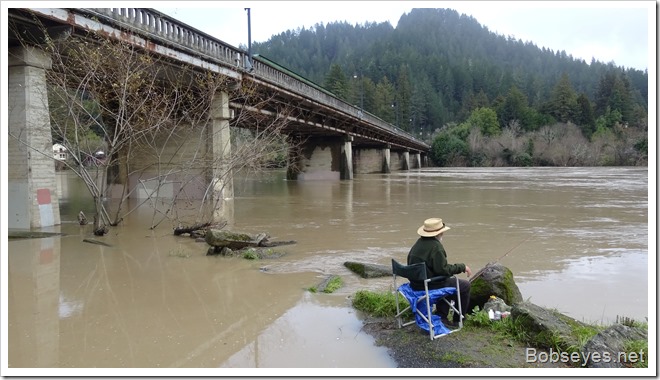 We chatted for a good while and then I headed back to Guerneville where I went into Safeway to get a few things.

I got my stuff and then went up to John S. and visited with him and his wife until it was dinner time and I went on home where the kitty cat was glad to see me.

And that was  my day.