Showing the BobCats how to fly a drone

Once I got it going today I got the drone out and flew it over our area for some practice, then I went over to the Bobcat’s place, the rig on the bottom right as they were interested in my drone. 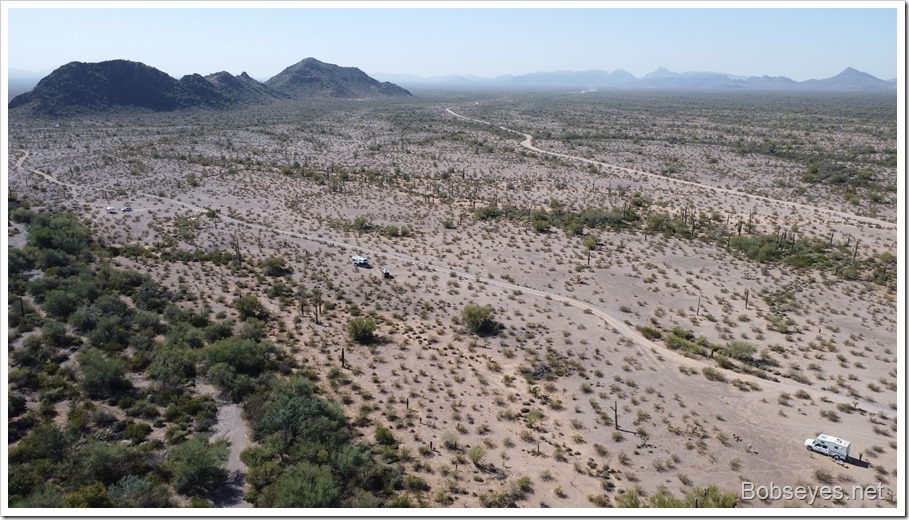 Al from the Bayfield bunch asked me to give the BobCat guys his regards in a comment and I will.

I asked them to set up a chair for me in the shade of their rig so I could see my phone’s screen which is what the camera on the drone sees with it’s camera, like this. I asked Cathy to stand behind me so she could see the phone screen and what I did to fly the drone. 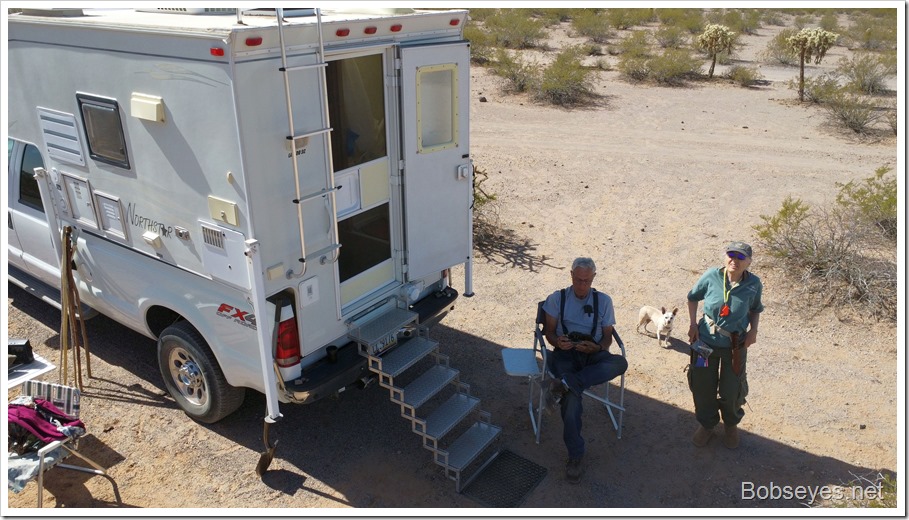 Checking out a road with the drone

I gave them a demo flying up and across the wash on the left that looks like a road as I wanted to check out where the road went on the right as I sorta got onto it the other day when I sorta got lost exploring the wash. I followed it a ways when I was waking but stopped and turned back so I was wondering where it went. 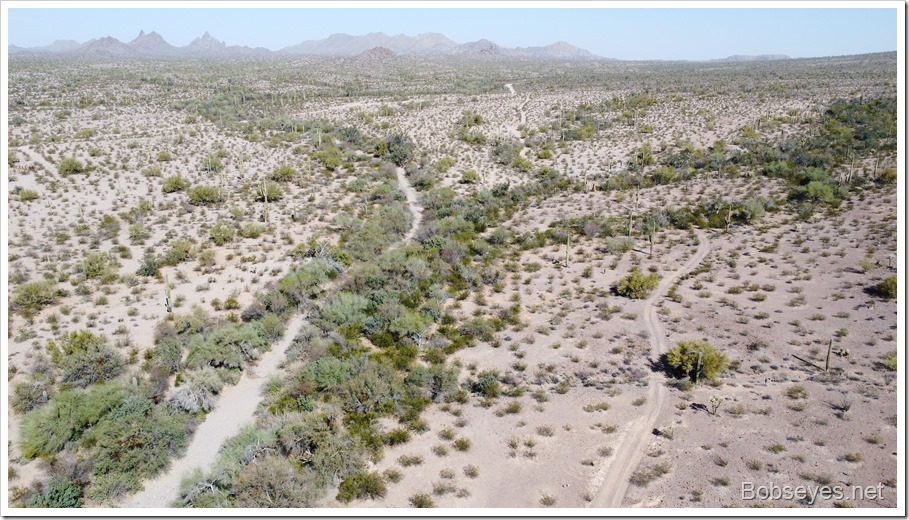 I showed Cathy how I take pictures with it, then I flew it way up in the air out of sight and then how to press the Return to Home button and how I land it by catching it in the air so I don’t break the flight blades from stuff on the ground.

Cathy’s game to fly it

Cathy was real interested so I said sit in this chair and I’ll tell you how to fly it and what to do. 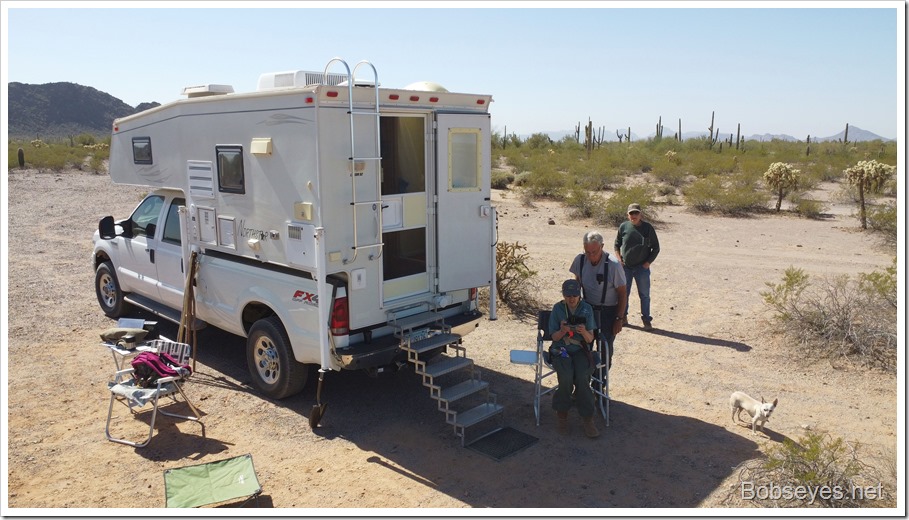 It’s really pretty easy to fly as if you take your hands off the controller it just stops in the air until you give it more directions. It also has a beginner setting, a normal setting and a sports setting, each one goes faster than the other.

Getting it into the air

I said do this and it started and I said push that flight stick and it popped into the air and rose about 25 feet and stopped.

Push that stick that way and it turned around in the air. Then I say push the other joy stick and it flies forward or backward or sideways and it will go that way. Easy peasy.

I said bring it down to about six feet off the ground so I can catch it and shut it down and she did that with no trouble. A good little lesson and I think she may be hooked. Her husband Bob was watching all this, as he was also interested. Cathy is the tech savvy one of the two. Setting it up can be a bit techy, but once setup anyone can fly the thing.

If you can’t see or hear it, you just push the Return to home button and it will come back to where it took off, so  it can be seen and heard.

This particular drone is made by DJI and is a Mini Two drone and the kit sells for 599 bucks which comes in a handy carrying case with three batteries that each give you about 30 minutes of fly time and some spare blades incase you break them. I catch the drone in the air to prevent this from happening as there are a lot of little rocks on the desert floor.

At 1 Gaelyn came over and we put the old van in four wheel drive and took off out the road we were camped on to do some exploring. 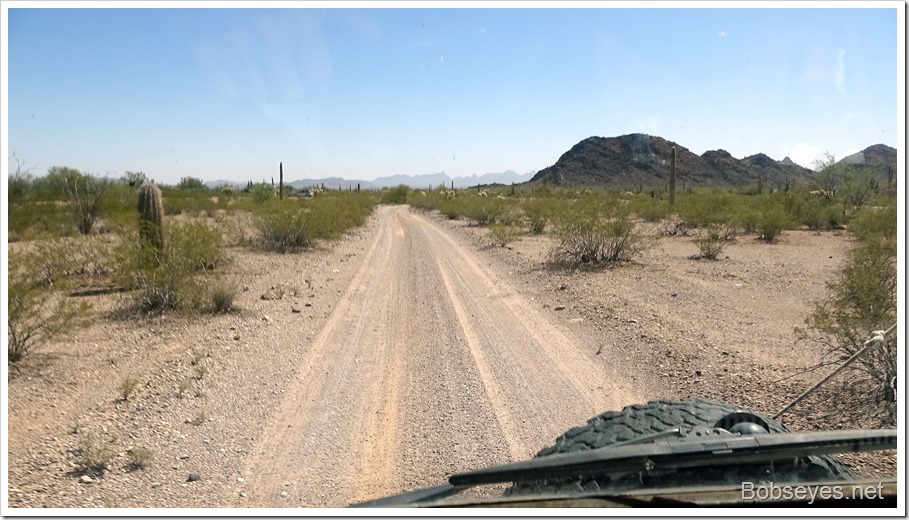 We headed out that road until we came to a gate. It wasn’t locked but we’d gone far enough out this road so turned around to explore some other roads out this way. 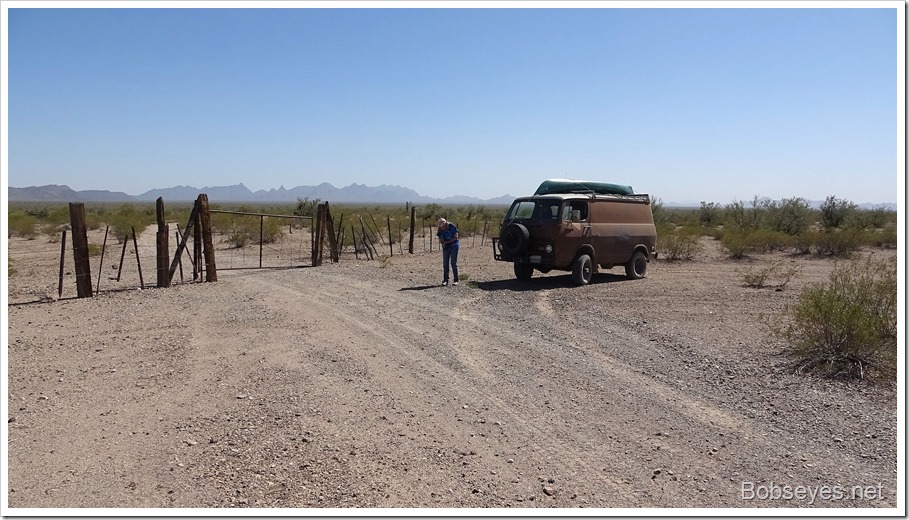 We went past this cactus and stopped for a photo of the fruits on it.

The plant was just loaded with fruit and some other nasty stuff to boot.

I found another road that cut across to another road so we went through here, Gaelyn being happy we were in the van and not her truck. 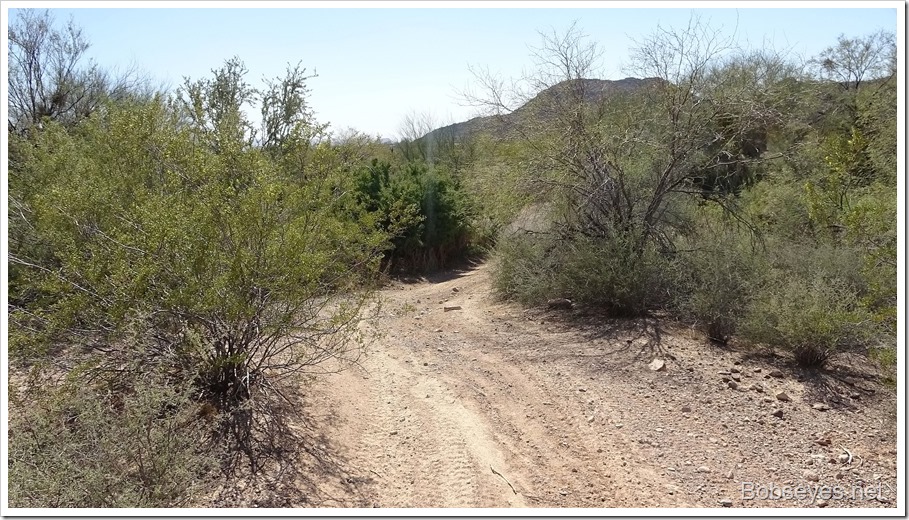 We discovered this fenced in area that was a water hole, also known as a tank. This one has an old cement rain catch basin and a newer metal roof catch basin with a metal tank under it. The metal roof catches rain water when it rains and the roof also helps evaporation from the sun. 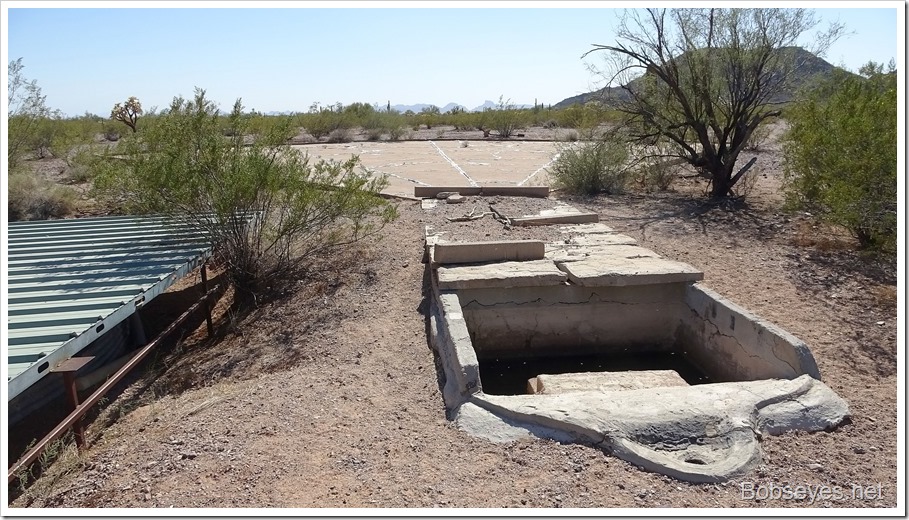 This is the old cement place where animals can get a drink of water. 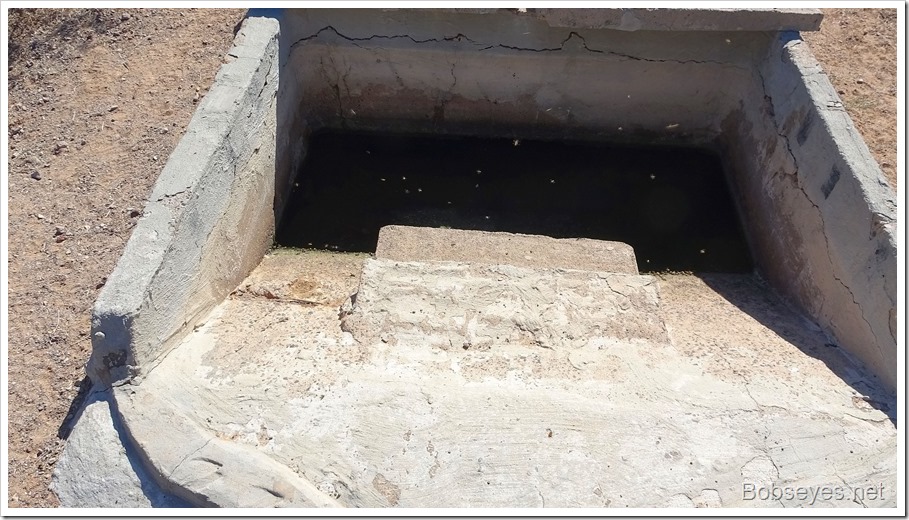 At the moment some honey bees were using it to drink water. 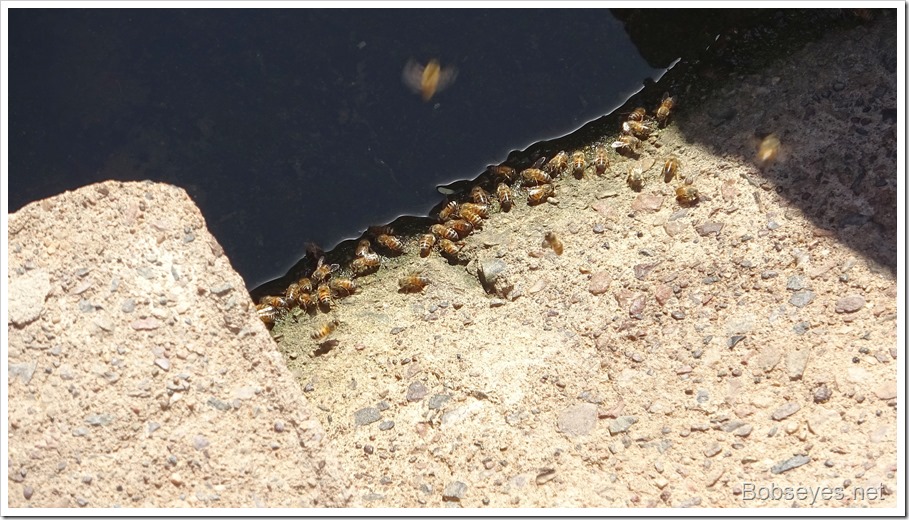 We continued driving around on roads until we got to the end of this road where things were real lush. 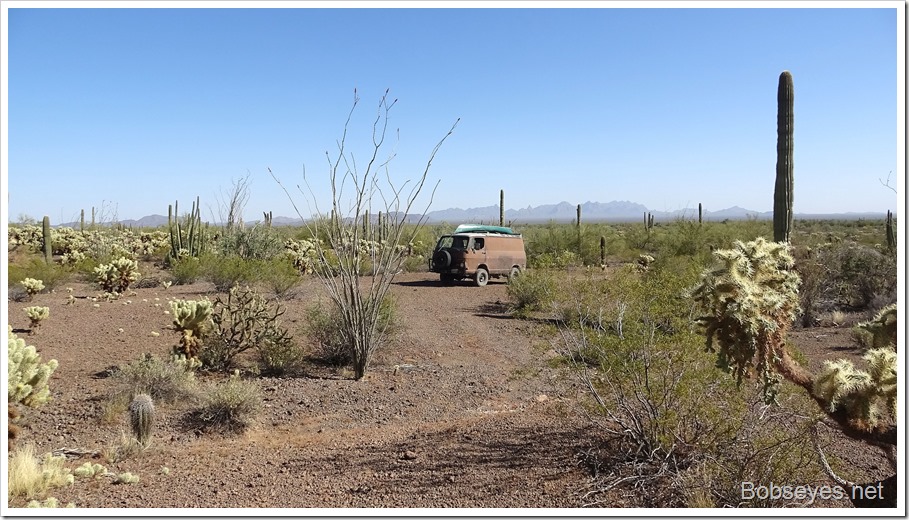 Gaelyn spotted this little critter getting some sun. There’s not too many of these guys out and about yet.

We turned around at the dead end of that road and I soon realized I was on the road I’d checked out earlier with the drone so we followed it out until we hit the road that comes into our camp spot were we found Cathy from the Bobcats walking with their two little dogs. We stopped to chat for a bit.

That was a nice ride. Back at camp we relaxed for the rest of the day. Gaelyn has a picture overload since hanging around with me, but that’s her problem. :O)

Nice day messing around in the desert.