Once I got it going today I went out and put food in the peeps pen so momma and the peeps would have something to eat. So far I still have three peeps but momma is still sitting on a few eggs.

Here’s a couple of the little peeps on some logs. They run around the logs a lot so the logs are working out better than expected as they were only put in there to hold the cage in place. 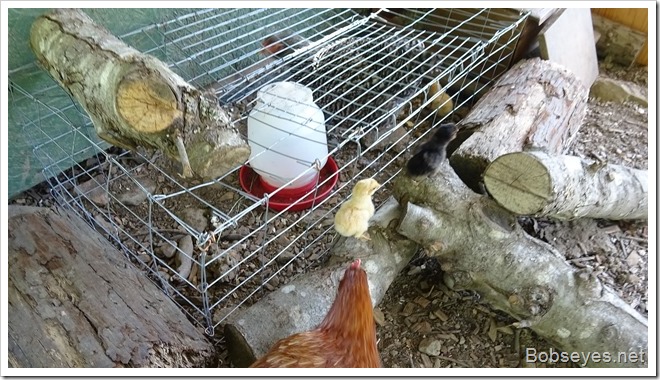 My cars right rear axle is making more noise sooner than I expected since I last checked on it so I put some grease into the boot with my needle grease gun. After thinking about that a bit I went in and ordered a new axle online.

I puttered around the yard a bit turning on some sprinklers and doing a bit of chair hopping.

Eventually I got to work on the failed bulkhead. I was able to get most of the rock out of the ditch. Some of the rocks were too big to lift so I had to roll them up the hill with much breaks in between rocks. 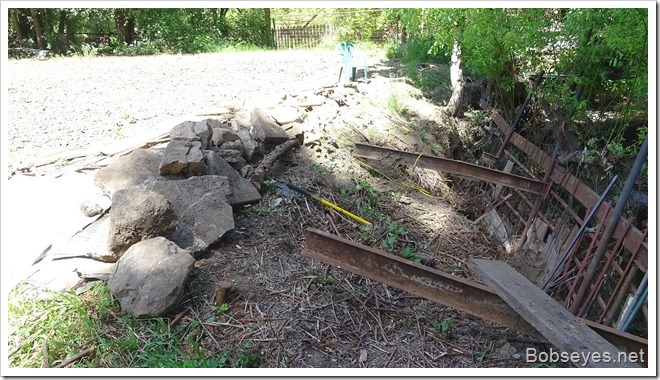 I need to remove all the metal stuff there so I got my hand band saw out and powered it up. The saw cuts pretty fast but after cutting one of the six inch channels the saw stopped spinning so I took it apart and found the gear in the drive hub was plastic and had stripped out so that was it for that.

My brother Tom came by and said he had another hand band saw but the switch was a bit faulty. If I wanted to fix the switch he’d drop it off. I’m hoping his better band saw has metal gears and I can fix the switch without too much trouble.

By the time he brought the saw by it was too late in the day to do anything about trying to fix the on off switch which I’ll likely do tomorrow or at least give it a try.

Checking out another job

Since I couldn’t cut any metal I checked out what I need to do to replace an old electrical panel I need to replace. I bought the parts for that the other day now I just need to do it.

In the evening I just sat around in the yard enjoying the nice spring day.

That was it for me for another nice one.