Car Repairs and Brushing Out Some Trails Up In the Hills

My car’s heater fan wasn’t working so I did some checking and found when I checked it’s relay it started to work again. Just a loose wire so I fixed that. There’s still something wrong as it’s not putting the fan air to the window defroster so I’ll have to take the selector apart soon but not right now.

I noticed my rear car tire has been losing air lately so I got some soapy water and sprayed it down to find the leak. It was in the back where I couldn’t see it well so I removed the tire. 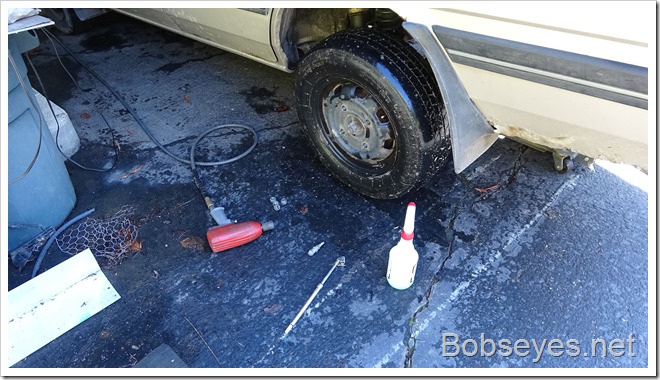 There was a roofing nail in it. I tried to repair it but wasn’t real successful so I called to make an appointment to get new tires as the car needed them. I think the repair will last long enough to get me to the tire shop tomorrow. 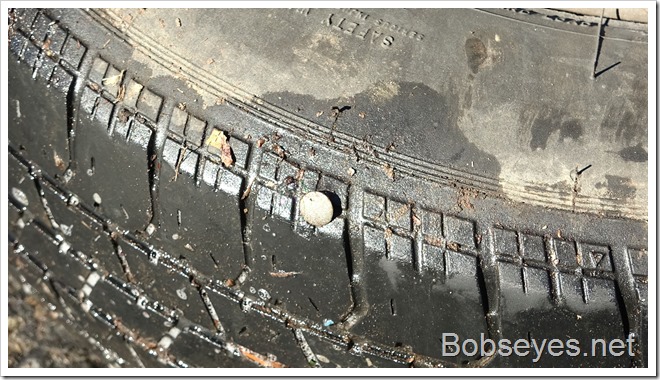 I’d been doing some chair hopping and felt like doing something so I gave it some thought and eventually got the chainsaw and a pair of loppers and rode the quad runner up to the Guerneville overlook to trim some brush on an overgrown trail.

The sun had gone down behind the hills to the west but it would still be shining at the top of the hill for a couple more hours so off I went.

I rode up through here. 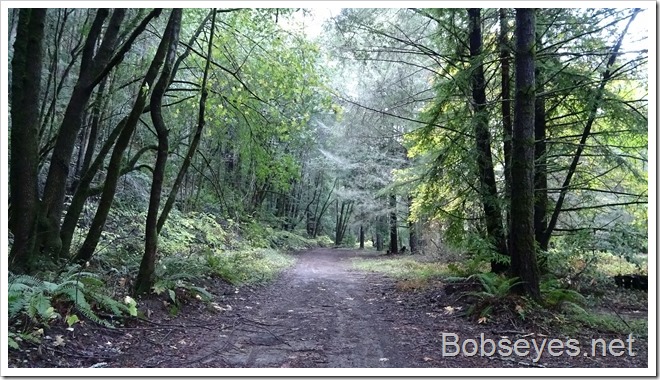 And parked at the top and unloaded my tools to work on clearing the trail which is off to the right. 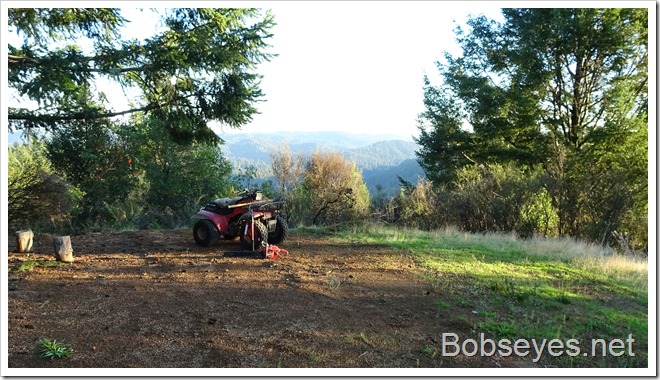 This is where the overgrown trail starts so I started using the loppers to cut the brush so I could get through. 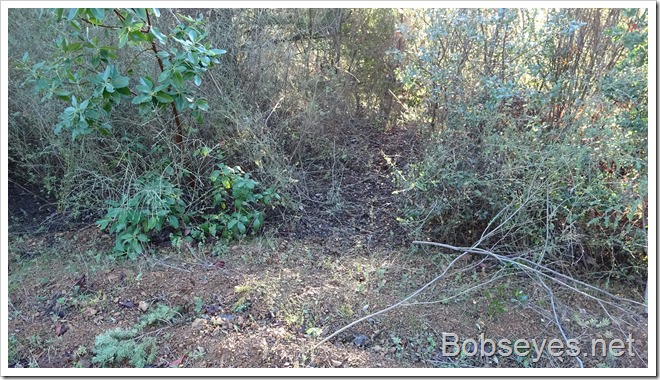 I made it into these trees where the going was a bit easier. 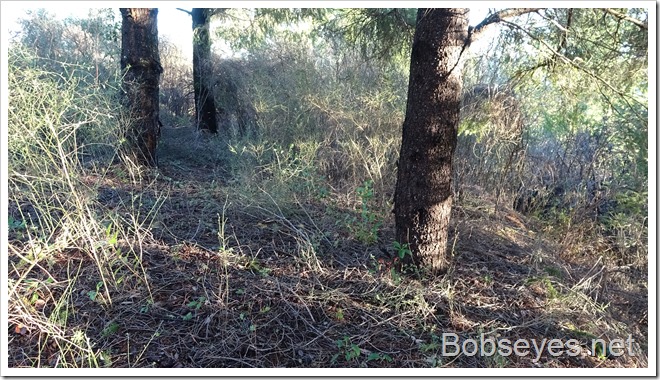 But continuing on, there was more brush than I thought so it was slow going. I worked just over an hour before my back said it had enough. 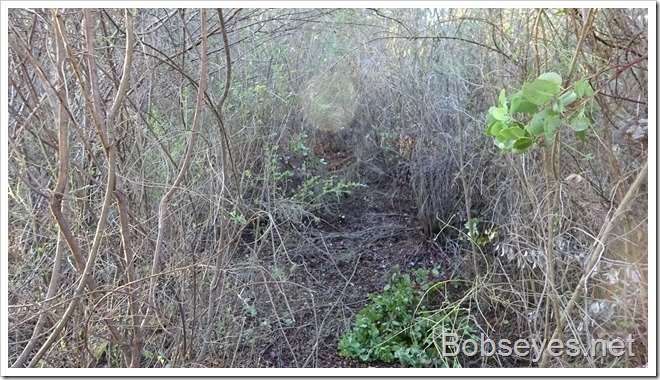 So after a break I got my tools loaded up and drove up the ridge to this spot where there is another trail that is also overgrown. I was just going to have a look but I got the loppers out and started cutting brush.

Some parts of the trail weren’t too bad and I made good progress. 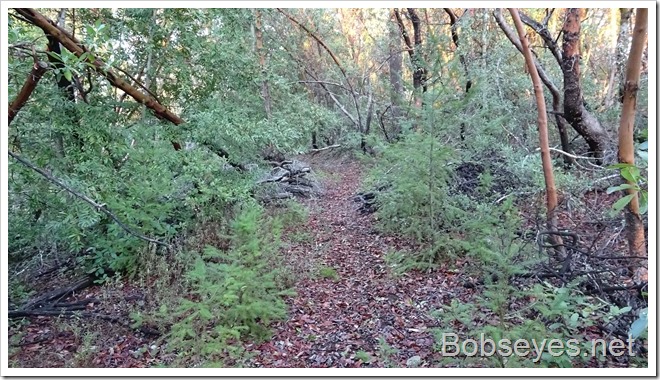 My back was saying it had enough again so I had to give it up for now but I got down to near the end where the brush really got thick. Another time for that. 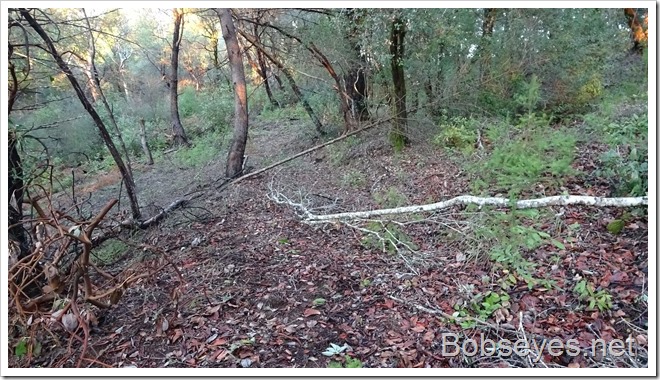 I loaded up my tools again and and started for home, stopping here and there to throw things off the road. It was starting to get dark. 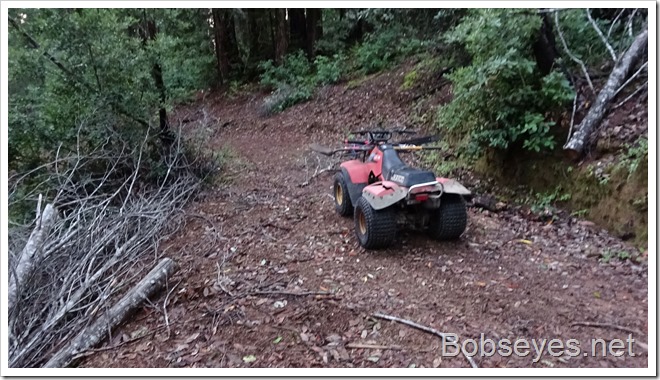 Last one for the day

The dark was coming on fast but I stopped to throw this stuff off the road and said that’s the last one for the day. 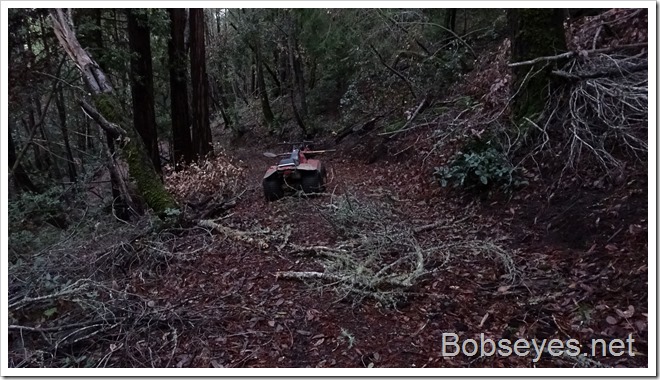 I headed for home in the dark. I hadn’t turned the headlight on when I ran over a big rock I didn’t see so I turned on the lights which aren’t too good as the chainsaw is right in front of the headlight. 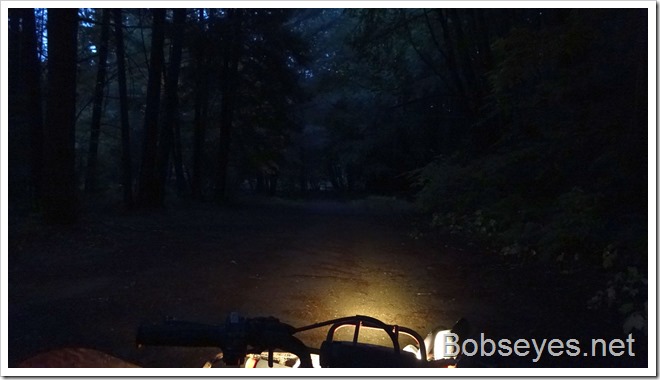 I made it home for a nap as that worked me harder than I thought it would but at least I got some good exercise.