Can’t Keep Those New Chicks in Their Pen

I think I over did it digging out the spring yesterday so my body said to take it easy today.

I started off the day opening up a door so the new chicks could get out into a small pen on the outside instead of staying in the feed shed all the time. I set that up and then did some chair hopping checking out the yard.

They go where they want to go

When I went by the chick pen I saw some of the new peeps in a part they weren’t supposed to be in yet. Their bodies are so small they can go through one inch chicken wire so it’s hard to keep them in until they get larger. They are about a week old so still very small. 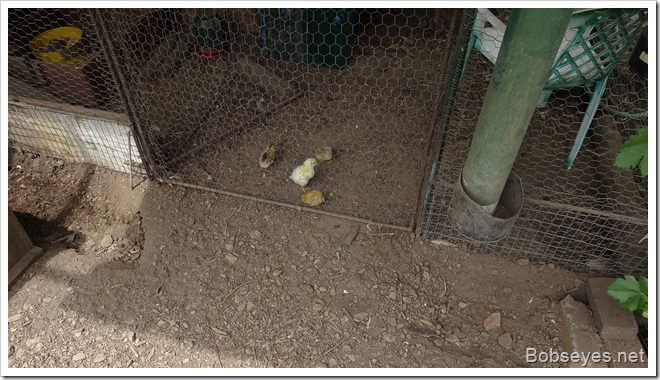 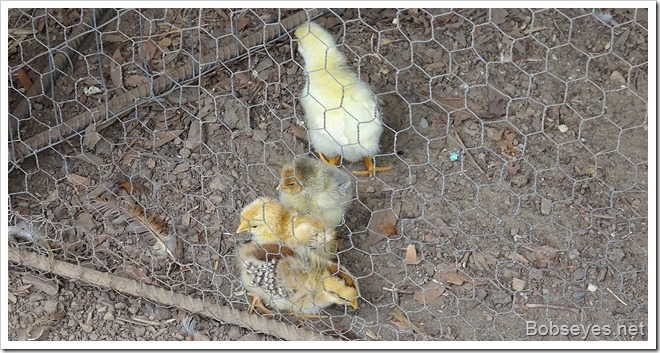 Earlier I had put them in the pen on the left but it didn’t take them long to find ways out. 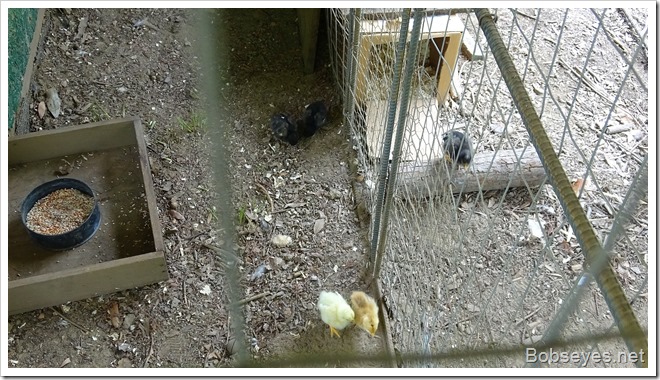 Some of them are really small. 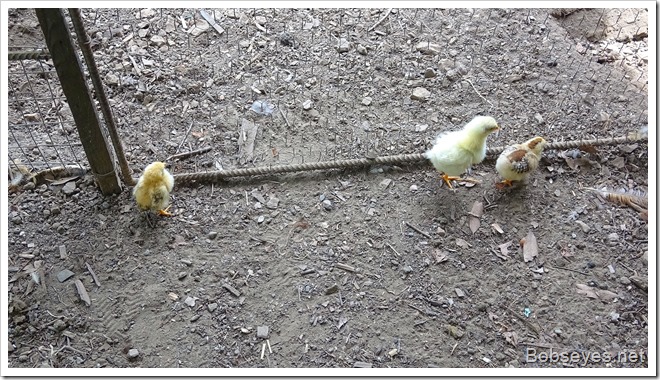 Actually it’s ok for the new chicks to get into all the chicken pens as long s they don’t get outside where the hawks get them, otherwise I’d let them out in the yard too.

I turned on the sprinkler to water the weeds for the chickens. 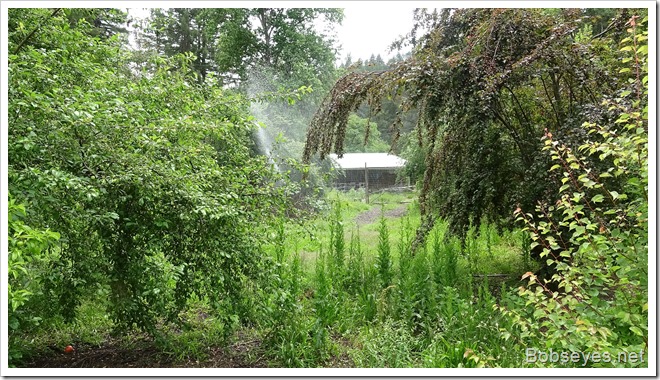 I wanted to have a look at the spring I’d been working on so I fired up the dirt bike and rode on up the hill along this road. 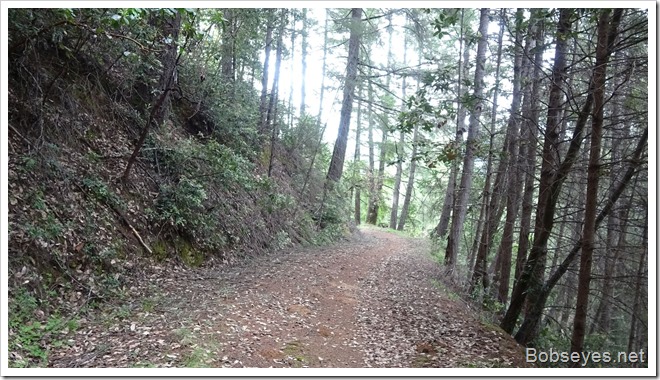 I looked quickly at the spring and it looked good with a lot of work still to do on it. My neighbor called this morning and said he’d need at least one day off, maybe more, before he could do any more on the spring which was fine with me.

I took this road on the way back down the hill. 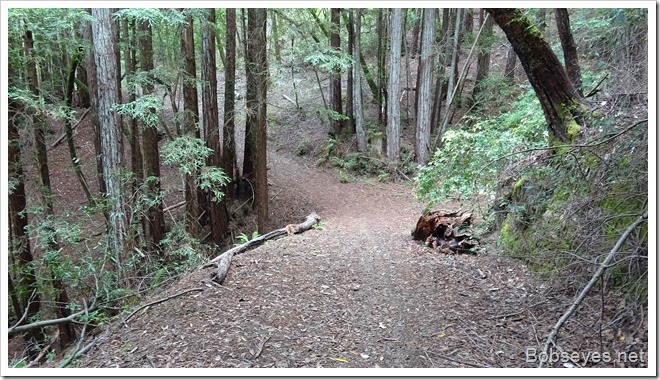 When I got back to the house I checked on the new peeps. I found them in the rodent proof feeder. 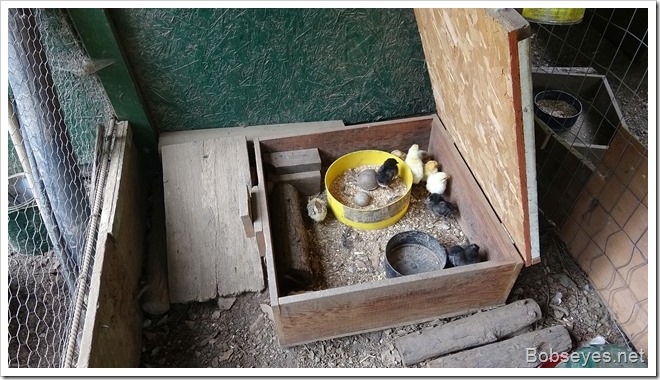 They’d taken it over thinking it was their home as their home box looks similar. They planed to spent the night in this box instead of their box inside the feed shed. 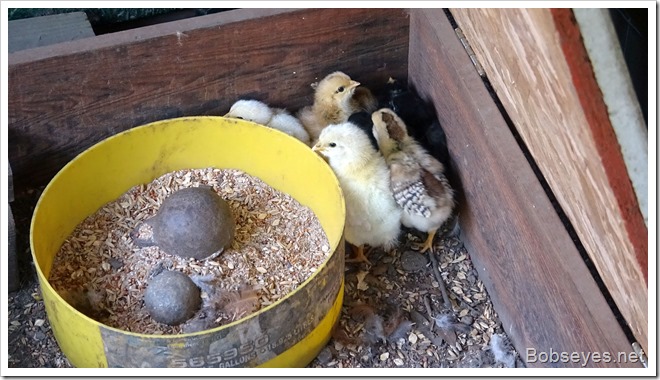 I noticed another  hen with a little older chicks had moved up into the big guys roost today for the first time which is a good thing. Now they are out of the dirty old box nest. 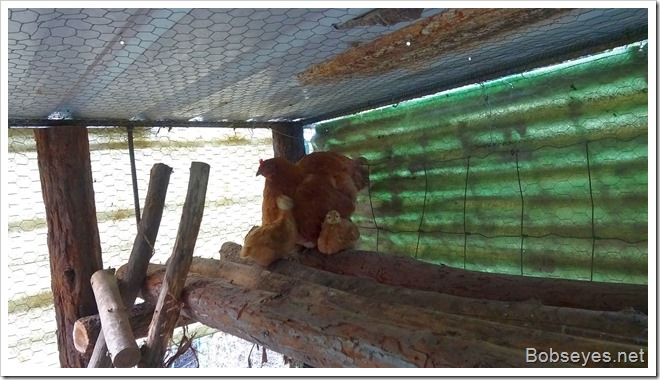 Just before dark I found a cardboard box and stuffed the ten new chicks into it for transport over to their assigned nesting box which I put outside since they seemed to like it out there.

Here they are in their nesting box where they will spend the night safely. 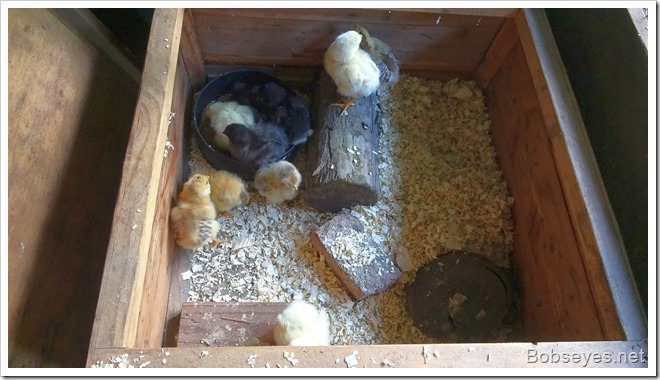 Here’s some of the big guys on their roost. 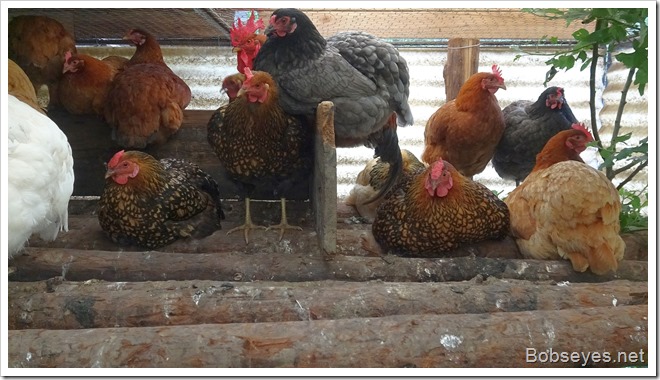 They all get along on the roost pretty much. 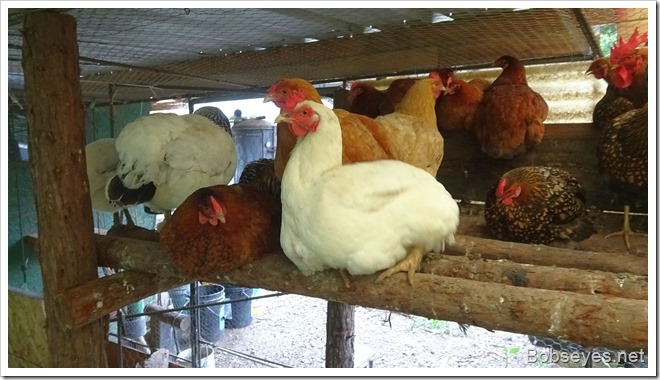 Nice day puttering around the yard and chick sitting, keeping those guys in line.