Monday I got it going and gassed up and headed out to the KOFA to Queen’s Canyon off the Palm Canyon road.

When I got near the parking lot near where Dan and I camped the other day I pulled over for a break. About ten minutes into the break pitter patter started on the van’s roof, a light rain. Big cold drops were coming down lightly. 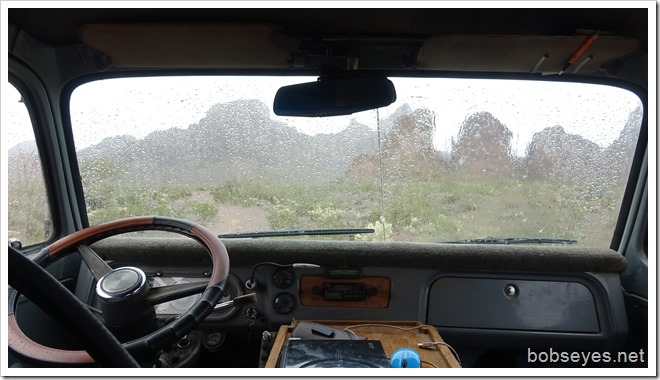 I decided this was a good time to make a cup of coffee so I did and enjoyed it while listening to the rain drops on the van’s roof. 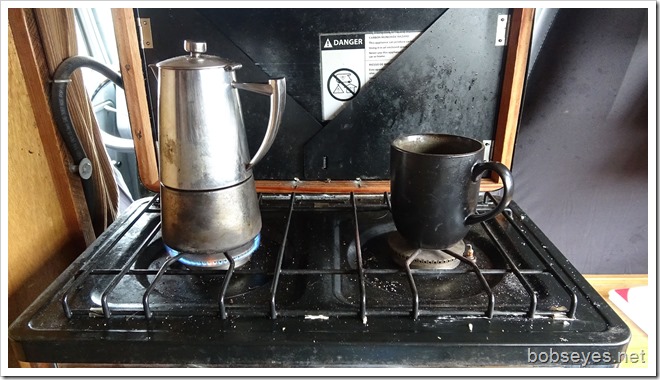 After about an hour I continued the journey into the Queen’s canyon on this road with the rain still coming down lightly. 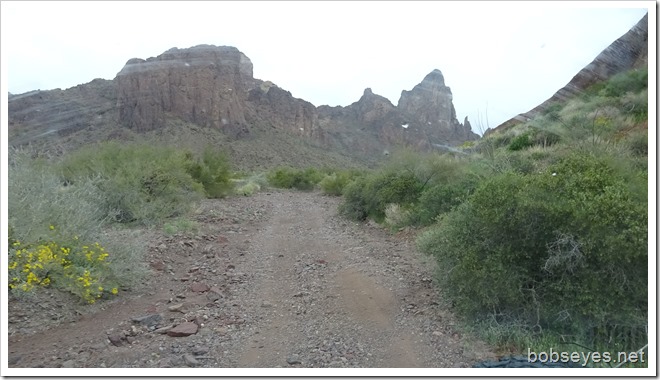 There were still lots of poppies but they were all closed up because the sun wasn’t’ shining and it looked like most of them had had it for the year. 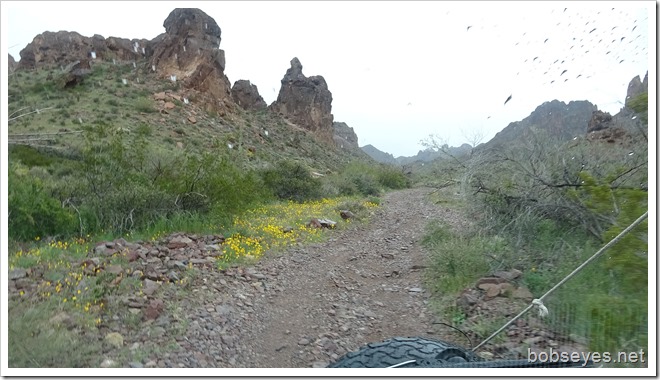 Camp spot at the trailhead

I made it to the Signal Peak trail head and parked here in the rain. I parked on a high spot just incase the creek in the wash started to flow but it didn’t while I was here. 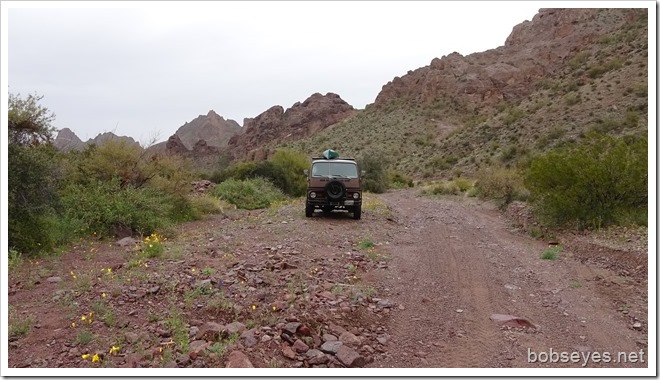 The rain continued through the night and all through the next day. I went out in the morning and looked up at the peaks on the trail I wanted to go up, the Signal Peak trail but it was all clouded in and raining so I stayed in the van and read. 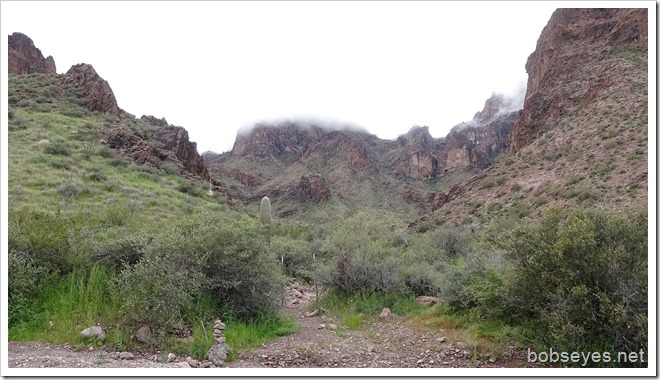 I was reading one of Louis Lamour’s books called Lonesome Gods which was set around the desert area in this area. I think it was one of Louis’s best books maybe because I was also in the desert and could appreciate what was going on.

I cooked up breakfast which is also dinner too for me. Sliced potatoes and onions. Yummy, no corn in there. 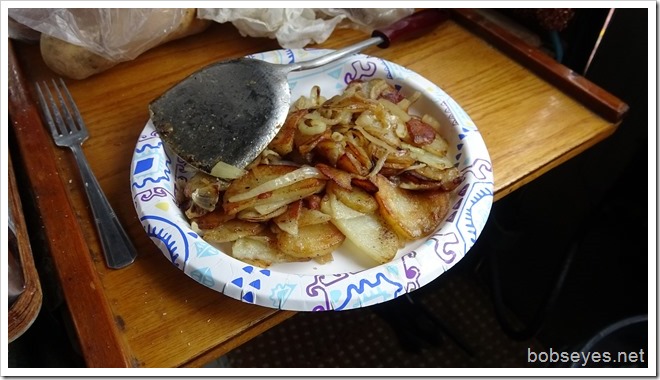 Later in the day I fried up some pan bread from some yeast dough I’d been brewing for the last few days. Fried in olive oil. 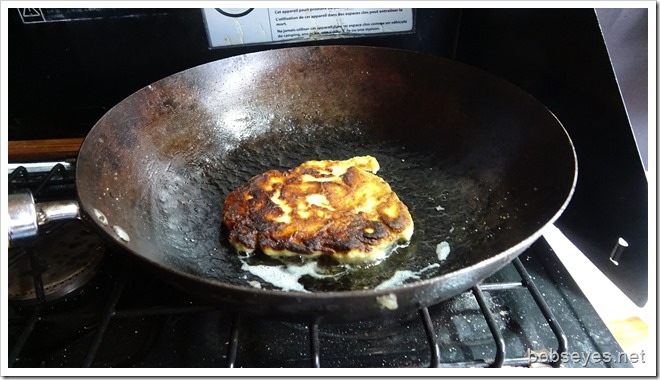 Evening hike up the road to the end

The rain let up a bit in the late afternoon so I decided to go for a walk up to the end of the road which looked like about a mile on the map, but I think it was more like two miles to the end of it.

I walked up this road poking along. 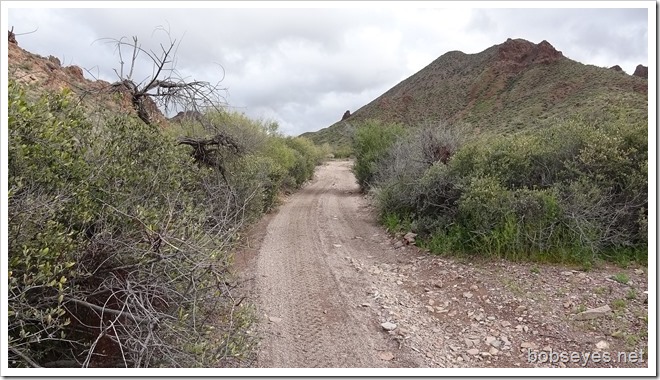 Some poppies along the way closed up because the sun wasn’t shining. 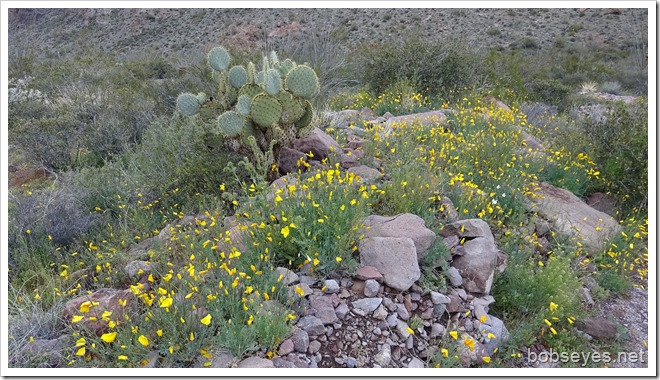 I was looking up at those rocks and caves thinking that might make a nice hike sometime in the future. 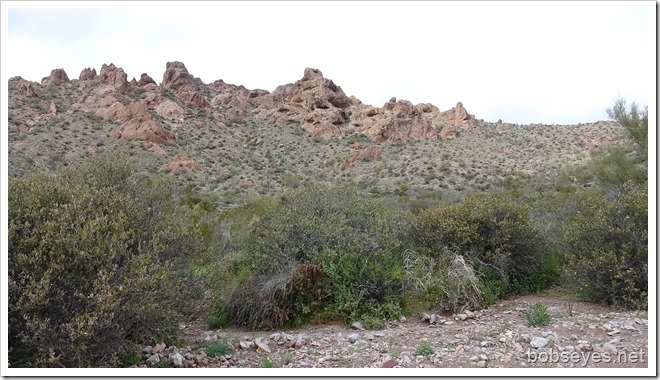 The caves look interesting and are of good size. 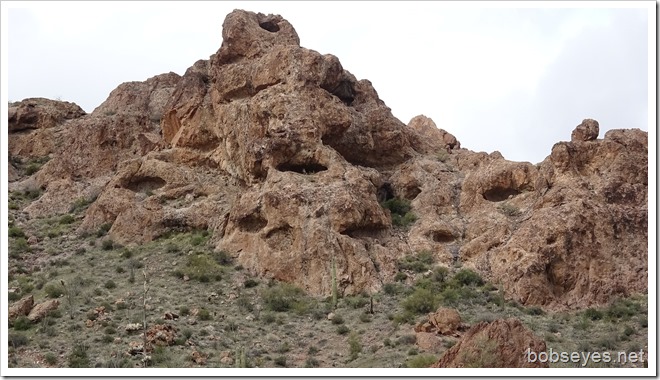 It took awhile but I finally made it to the end of the road at this sign. 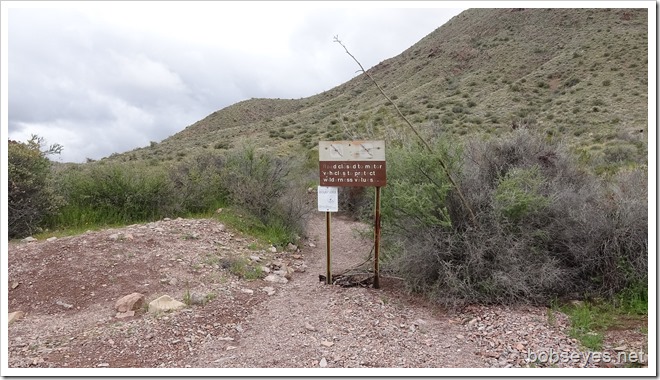 I walked around a bit at the sign to see what there might be to see. I spotted this water measuring device but that was about it. 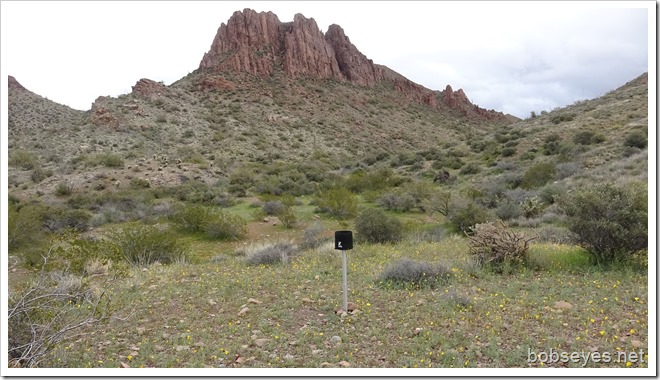 Heading back down the road

I didn’t stay long and started back down the road and peeled off at a spot where the map showed a tank. I looked but I couldn’t find it.
Anything with water stored in it is called a tank in the desert. Most of the tanks are just rock that water collects in when it rains. I didn’t find the big one in this area but this little one was in the creek from the recent rains. Just a puddle of water. 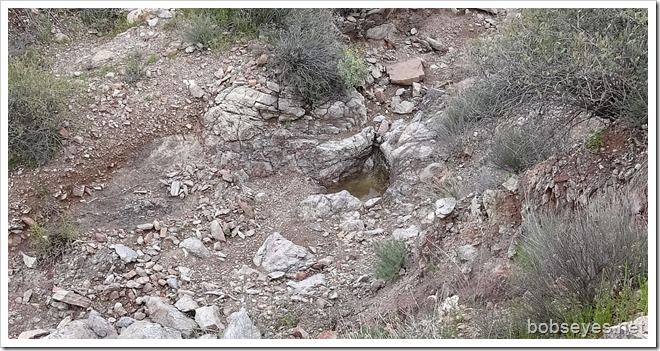 I walked through here on the way back. Real lush area. 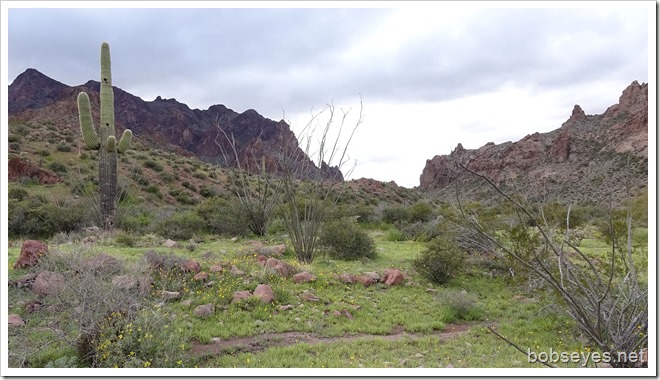 I had a good night and the rain stopped, but then the wind picked up and was real gusty and cold the next day so again not a good day to hike up the Signal peak trail.

I was sitting there in my van when I heard a truck outside so I went outside to see what was going on. A guy and a girl where parking their truck so I shot the bull with them a bit and told them what I knew about the Signal Peak trail. They got their backpacks out and headed up the trail and were planning to stay the night up there.

I decided to leave the area and camp back by where Dan and I parked near the parking lot.

But first I wanted to go for a little hike so I walked up here where the Signal Peak trail starts. 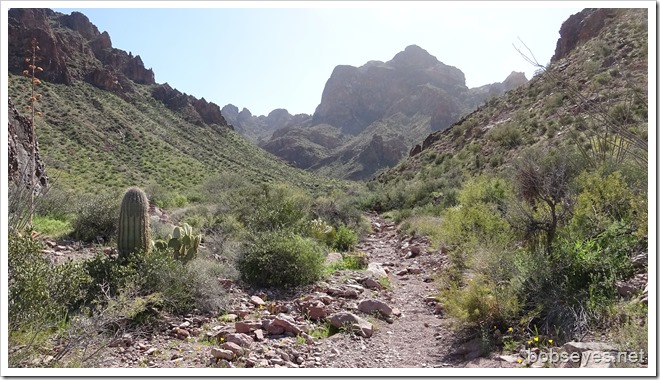 I made a little loop walking around here before heading back to the van. It was still very windy gusting away. 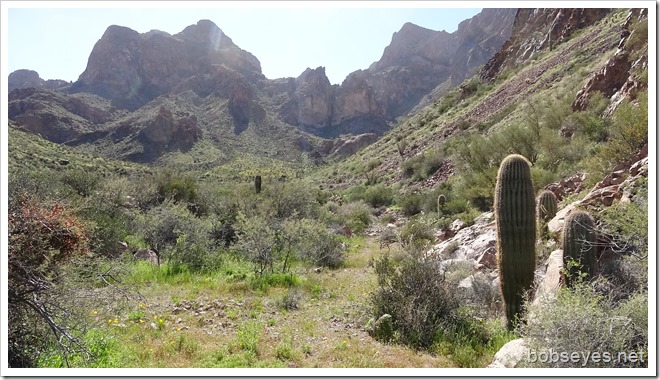 Once I got back to the van I packed things up for travel and started the drive out. When I got to where I was thinking of camping the wind was blowing good so I canceled that camp and started back to Quartzsite and camped at my Sun Kiss Road camp for the night with the wind still blowing.

The next day I drove over to Patti and Marty’s were I’m taking it easy and writing up this blog.

I might get back to that spot again before I go home, maybe, but I  have some other stuff to explore so we’ll see.