Barry came by about noon and we were off on another adventure dirt bike ride.

We headed on up the hill going by this dozer parked because the guys were working on getting the burned excavator out, just up the road where we are going. 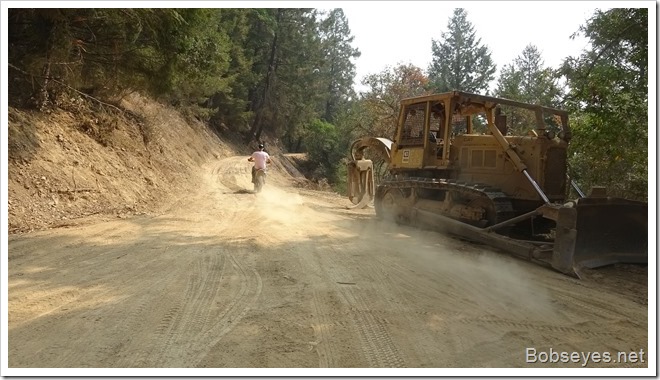 Shortly we came upon the rescue operation. 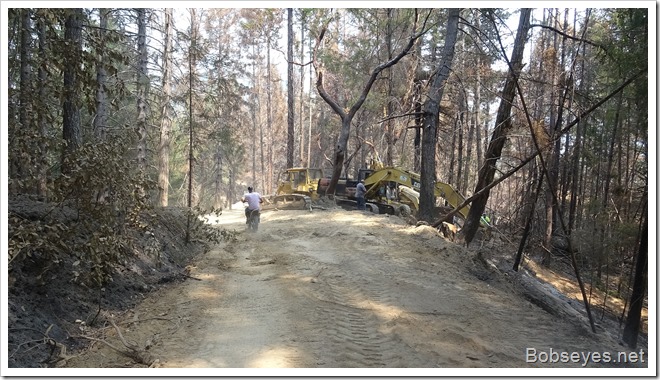 They’d gotten the burned up excavator up out of the canyon and up to here where they could get it loaded on a truck but that wasn’t’ so easy as the excavator had no power and the hydraulics were burned up so they had to deal with the boom. They had to move the boom and chain it up which they were working on here. Note the little boy watching it all. Most of the guys working are his uncles, all from Cazadaro. Parmeters, which have the reputation of being loggers and rough and ready type people that are very good at what they do, the best in the country. 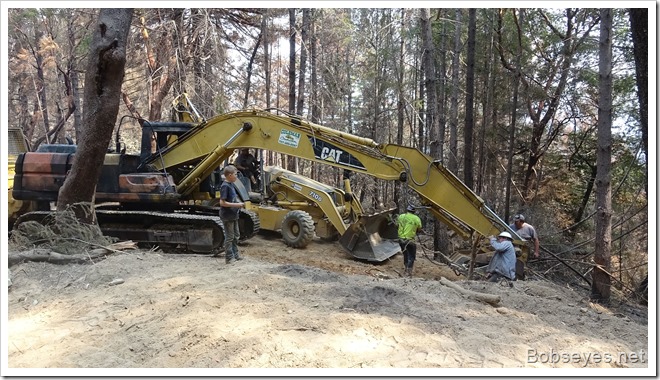 I asked the boy if he had a dirt bike which I knew he would. He said yes, he races them.

The backhoe is moving the boom around to get it into position to chain it up. 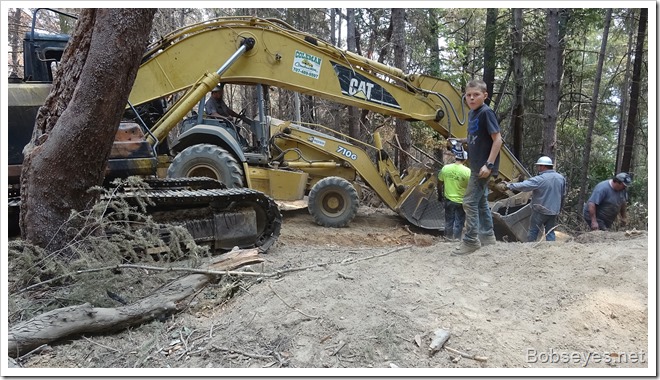 The dozer is cabled to the excavator and is pulling it onto the road to get ready to load it up onto a truck. 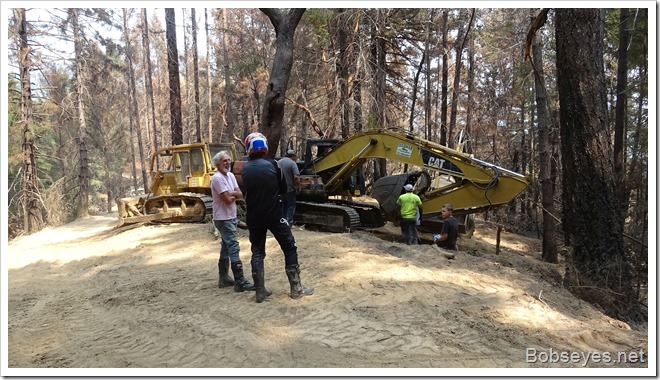 Here’s a view from the other side. 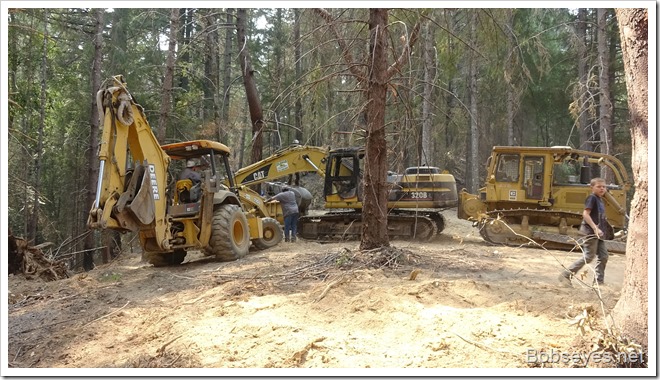 I think this is the machine’s operator. Note all the black oil on his arms and his clothes are a bit dirty eh. He did say he was insured which was good as this rescue was going to cost and lot and so was a new machine as this one looked like it was beyond repair. 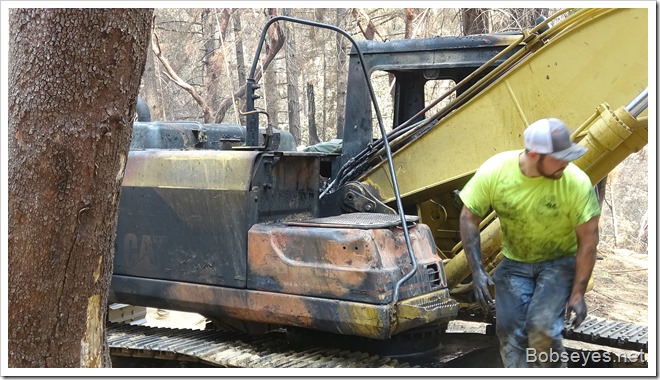 The dozer had some nice artwork on the blade. Note the good luck horse shoe on the side. 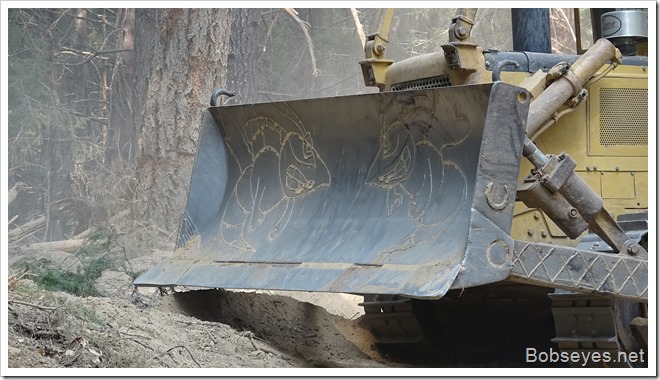 They brought the truck and trailer up and started the difficult task of getting the dead machine on the trailer. Pretty burned up eh. 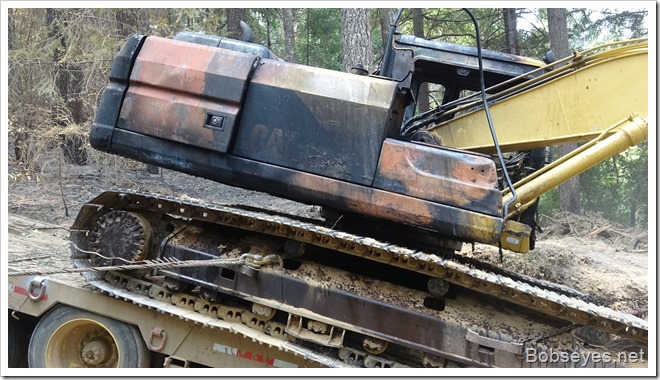 They got it loaded up without anyone getting killed. Note the boy is right in the middle of it. Reminds me of when the park guy was telling me how dangerous it was around the equipment up here when he was giving me a bad time. I’m an equipment operator just like all of these guys and the boy is just learning the ropes. Nothing to be concerned about when you know what you are doing. 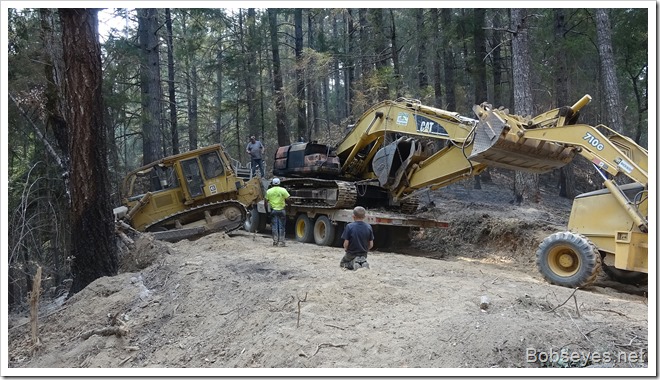 We turned around and went back up the road while they chained the machine down. We rode down to the goat ladies house to see if they were home where the big white dog was. I think we just missed them as they had to go down to the city fairgrounds each day to feed their 200 goats. They must of taken the big white dog with them as he wasn’t there today.

Then we rode back up where they had the excavator ready to move out down the hill.

I gave the guys a big thumbs up as it’s nice to watch people that know how to handle difficult situations. 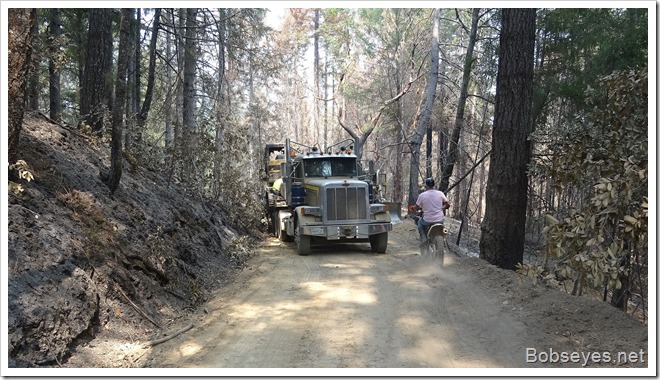 We made it to the Robert house and this was the scene. There were more dirt bikes in the garage to the left where Ross was helping 4 young girls fix a flat tire on one of their dirt bikes. We chatted with Laura a bit and got info on the roads where we wanted to go today. 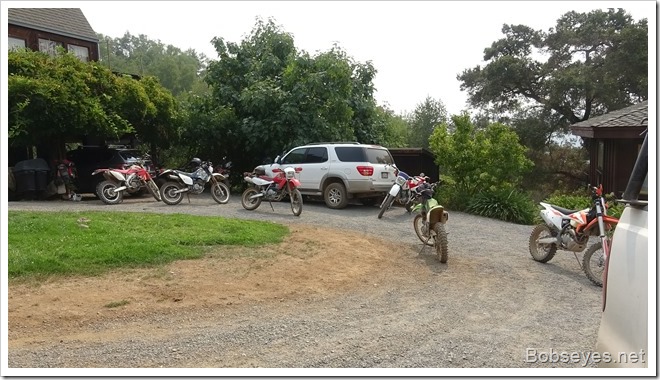 We rode up to Bull Frog Pond and up to a State communication tower. The tower didn’t burn but the power to it did and hadn’t been repaired yet but the electrical guys were working on it up the road where we would run into them soon. This is the view down from there. 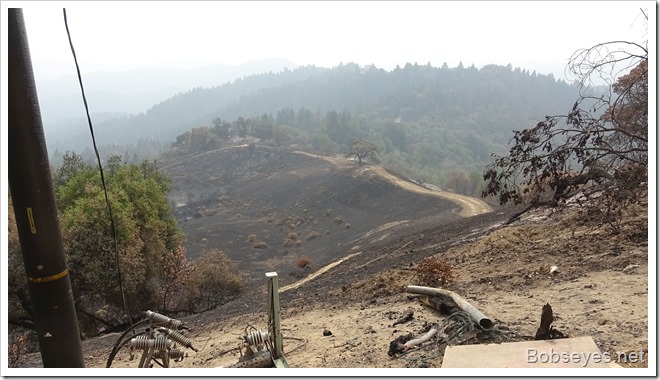 We came in on that road. The fire was fairly hot in this area and burned a lot of stuff. 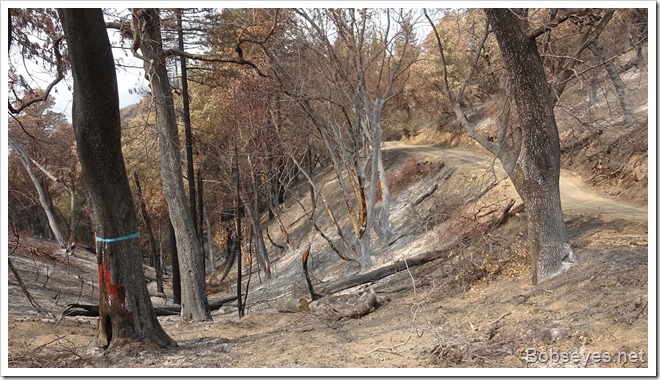 Most of the houses in this area burned, only two were saved. That’s because the fire came through here early and there were very few fire guys online at the time until more arrived a couple days later from all over the western US. The furthest guys came from New Mexico, oh wait a minute some came from Texas.

This was the scene of one of the burned out places. 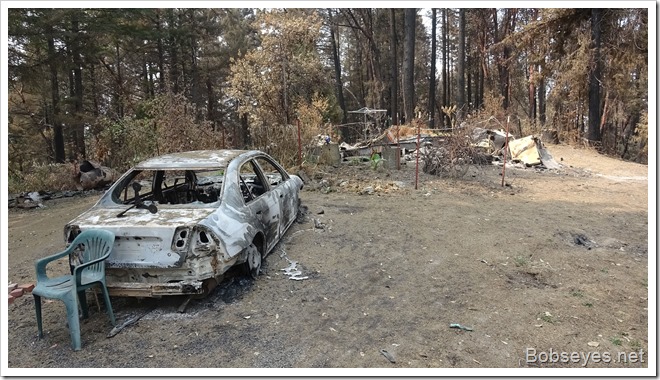 We were headed to Mount Jackson, an old fire lookout tower that is now a huge communication spot for this area.

It was still quite a ways. We rode down through this area. 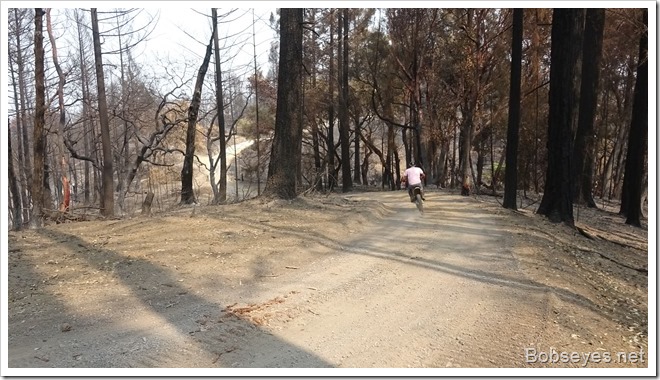 We ran into these power guys working on replacing the power lines. We chatted a bit and they said they had 16 miles of line to replace. There was a guy on each pole for about a half mile and we had to wait at one place to get by the trucks. A chopper had brought in and set the poles for them. 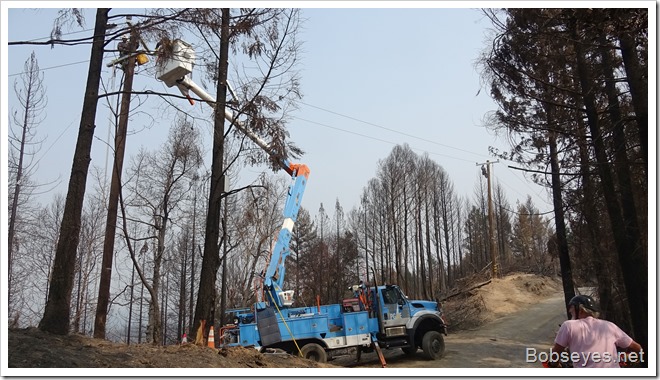 We checked out the is place as we met the owners at the Robert’s place earlier. They had multiple houses. All the houses burned on this ridge except 2. It wasn’t a heavily populated area. We used to call this place Mortimer’s and we’d stop in, in the olden days and steal oranges from the old tress as at that time no one lived here. 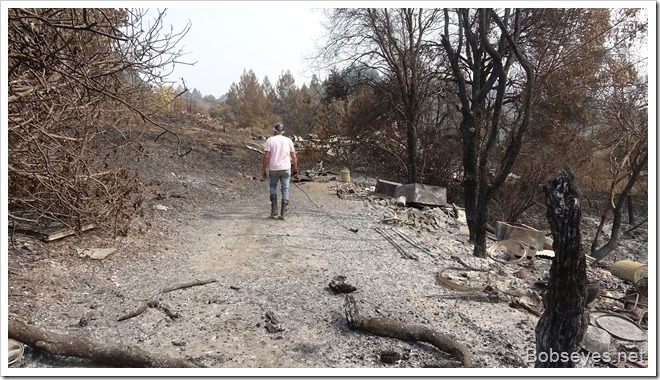 From there it wasn’t too far to Mount Jackson. We went though and open gate on the way up and  we went by a house where we saw some people so we stopped for a chat. Interesting enough these people had heard about us. They knew the people that rent from us.

No one was at Mount Jackson when we pulled in. The fire had burned right up to this spot and I’d heard them defending it on the fire guys radio. Lots of  fire retardant was dropped here to prevent the communication towers from burning up. The trees are red on the left from the fire retardant. As it was some of the power poles burned up and they brought in some generators to keep the communication stuff working as this is a very important site.

Barry is checking out the area and me too. 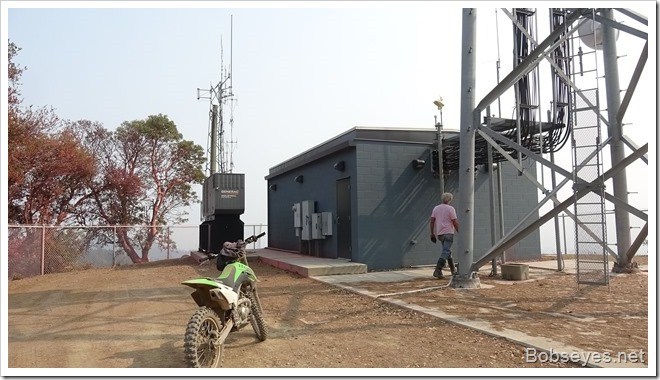 There’s two towers here and this is the other one. 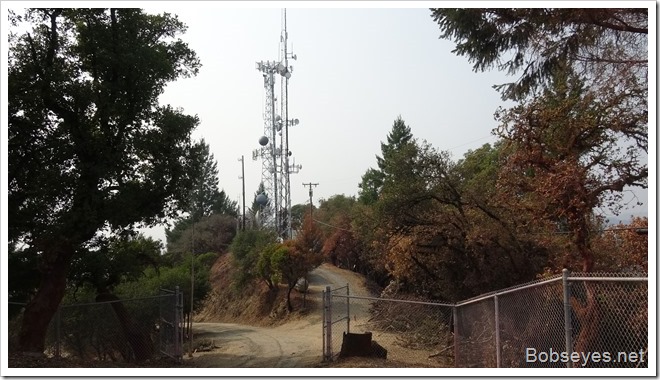 On the way back down the hill a guy we passed at a house had locked the gate locking us in. He did this on purpose. We cussed him and were just able to get our bikes around the locked gate on the side of it.

We were thinking of going to a place near where this fire started called Red Slide but it was a long ways and it was late in the day so we might go there tomorrow.

So the shortest way home was down through the redwood stare park.

I wanted to chat with one of the park guys and caught him as he was jumping in his truck to head home, on the right.

He’s the park’s ecologist and wants to go down to the Russian River Estuary paddling with me to learn what I know about the estuary as part of the estuary is in the state parks which he is also responsible for.

We’ll get to that eventually after all the forest fire stuff gets put to bed. 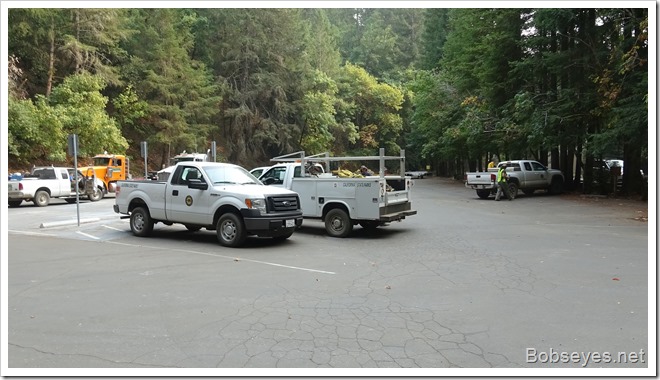 We headed on home and were talking with my brother Tom when a bunch of dirt bikes came out of the woods and rode up the road into the park headed home. It was the dirt bike gang with all the girls too. Shortly after that the girls dad came by on his dirt bike and went up through our place. He was trying to catch up with the other riders but they’d gotten far ahead of him.

We went on home and were fairly beat after that long ride.

But the ride was a good one and we had a great time. It won’t be long when all the gates get locked back up and we won’t be able to go just anywhere anymore so we need to make the best of the situation.

Nice day for sure.