So I was sitting in the Bruneau library this morning posting my blog. Once that was done a guy in there doing internet stuff struck up a conversation. Seems he once had an old van like mine only a Ford and about the same year. We got to shooting the bull when just after noon the place started filling up with what looked like abut a dozen local ranch ladies. They were having some kind of pot luck. The guy said there was some kind of lecture going on, so it was my queue to hit the road.

I headed out Hot Springs road. When I got to the end of the pavement I started to go out the dirt road when I heard the Air Force jets doing bombing runs on the nearby bomb range I was going to drive through. I decided the road I was on would keep until next time and turned around and  headed out the  other road to have a look as that was the road I was going to take to Jarbidge anyway.

I drove out this road. 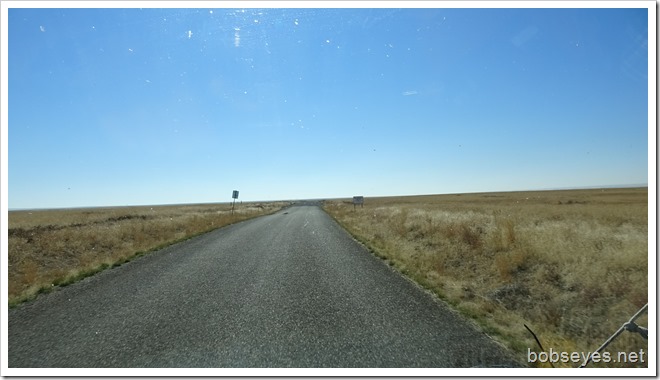 And checked out this sign. Yep, I was on the right road. 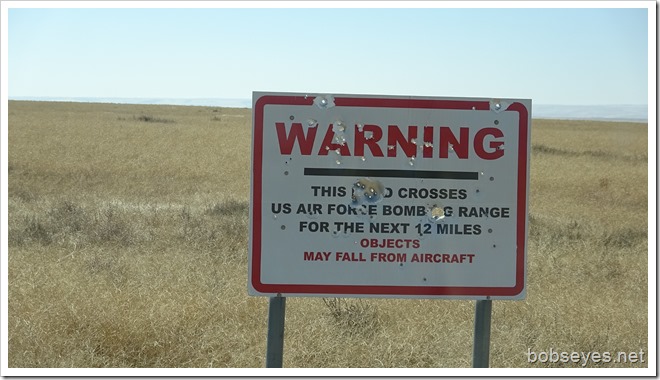 I could see the jet’s making bombing runs out there but it was too far for my camera. It sounded like a thunder storm for about a half hour as they were going in circles and making more runs. They left the area after that and it was quiet. 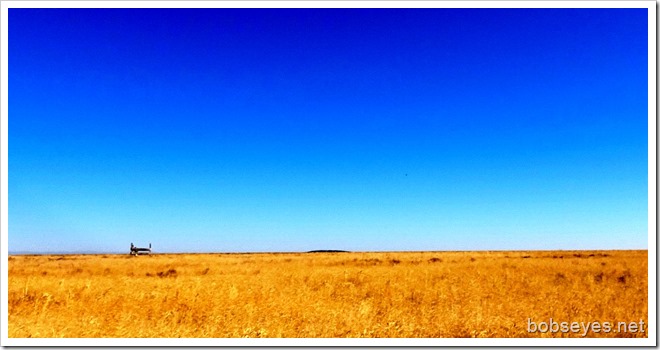 I continued on down the road which was in pretty good shape as there were several military places out here and they seemed to keep the road up. 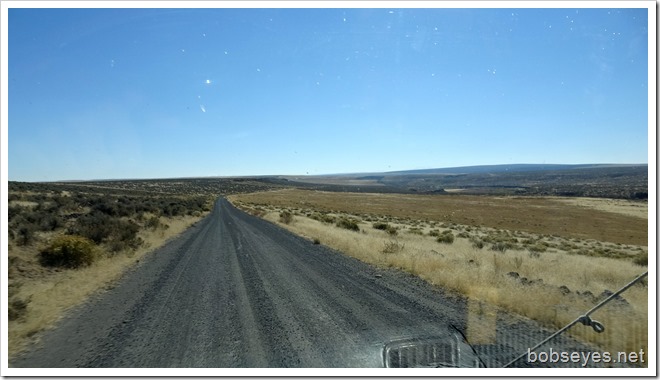 Crossing the Bruneau River at the Clover crossing

I crossed the Bruneau River here at the Clover Crossing. Looks like they are using most of the river water for irrigation. 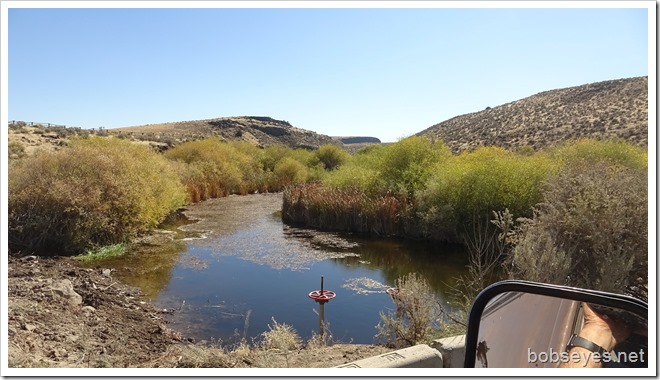 After driving for about an hour I stopped here to pause. This was the road down to the Bruneau river called Indian Hot Springs. It’s a kayak launch area and it’s rocky.

Once were stuck down there with Dan

Dan Starr and I got stuck down there on one of my past trips a number of years ago. This also means I’ve come around to this road I’ve been on before. 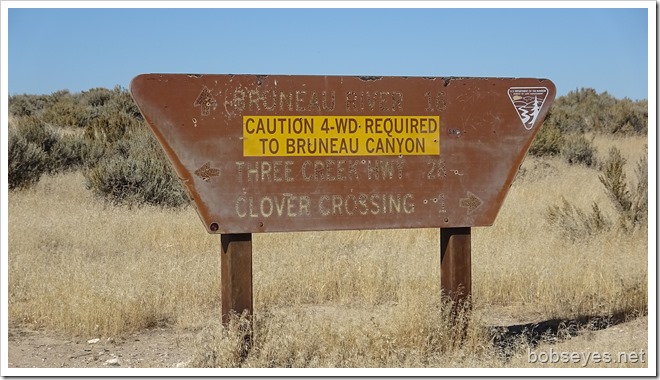 The story of getting stuck

The story of Dan and I almost getting stuck down there goes like this. We’d driven down the rocky road to the river. It goes down a solid rock road on the last part. We were down there when some other people showed up so we talked with them. The lady in the group said she wasn’t staying as if it rained it was almost impossible to drive out of this spot because the road got so slippery. We thought it couldn’t be that bad as it was all rock on the steeper part.  They took off and we stayed the night and it rained a bit.

Yes, it’s slippery as in snoot

Next morning we started driving out and sure enough we got to the steepest part and the rock was snoot. Turned out the rigs coming in off the desert bought a certain amount of the dirt down on these rocks which when wet turns to snoot which it now was.

Lucky I didn’t get killed

I tried to go up a several times and would just stop and slide back down the road a bit, almost going over the edge each time. Dan wouldn’t ride with me because it.

Well to get out of that we had to take dry flat rocks from the side of the road and lay them in two lines up the hill for a path to drive on. It took some time but it worked. The road was fairly muddy the sixteen miles back to the main road too so we had a time. That was an adventure.

The van continued on down the main road headed towards the Jarbidge area. 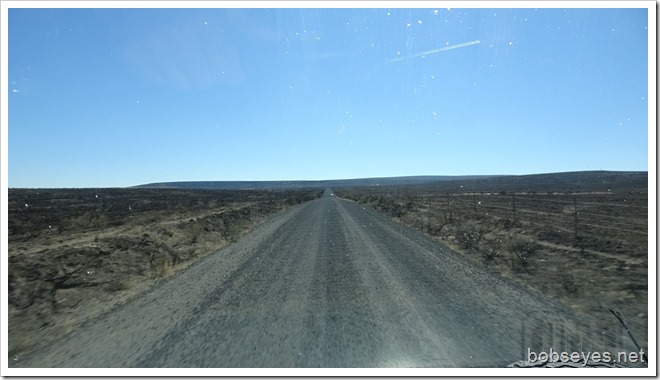 I went by this gate and stopped to see what it was.  A Laser test range. Sounded good, I bet at night there is some neat light shows as destructive lasers use a lot of power and make a lot of light. 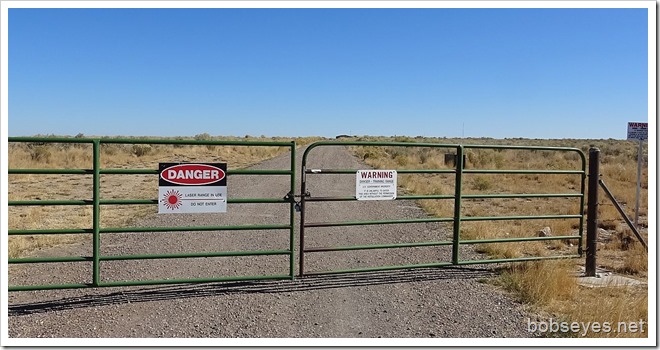 It wasn’t too far from there until I hit the road that goes to Jarbidge from Highway 93.  23 miles to Jarbidge. A a bit of snow in the mountains from a recent storm. The mountains are about 11,000 feet and are called the elephant mountains, I think. 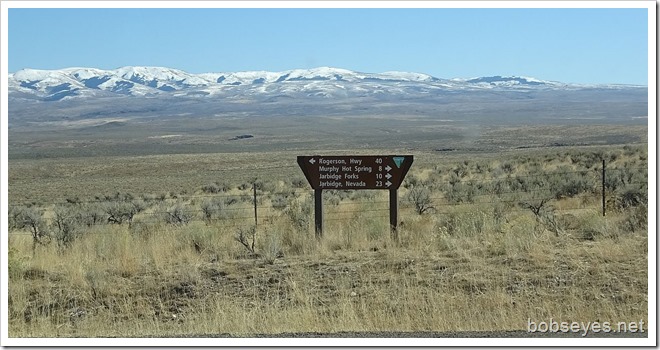 The Jarbidge Mountains are just as high and are a wilderness area which is above the town of Jarbidge and that’s where the Jarbidge river gets it’s water.

Here I’m starting into the river canyons, this is going down to a place called Murphy’s Hot Springs which used to be a resort. There’s about 20 people with places there most are likely for summer. 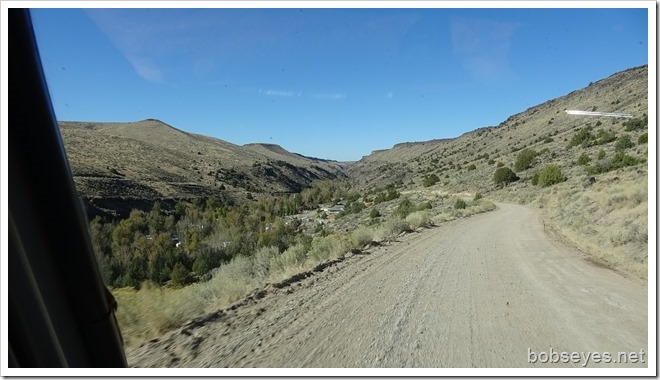 Road up the Jarbidge river canyon

I finally hit the Jarbidge River Canyon and went along this road, fairly rough and rocky but also very scenic. 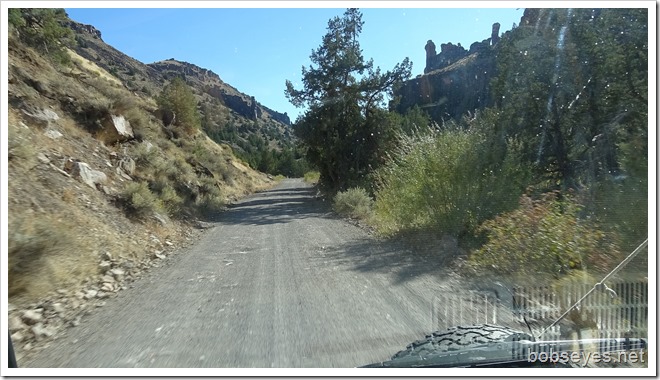 I stopped at the dump on the way into town and dumped my trash. 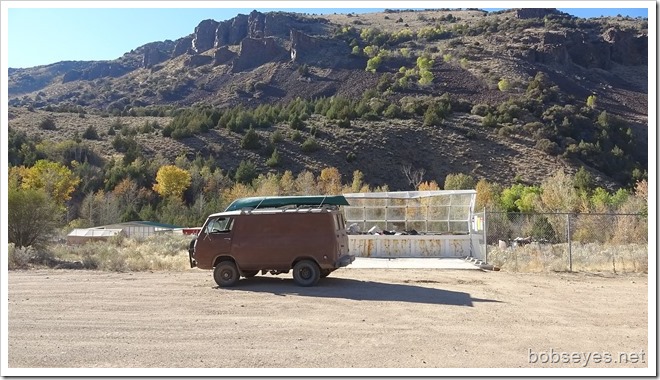 Jarbidge wasn’t far from the dump so I drove on into town at their ten mile an hour speed limit. I wanted to see if Ray at the traders store was still alive as a couple years ago when I was  here he wasn’t doing too well and some of the local ladies where helping him run the store. I always stop at his store to shoot the bull with him for a bit and sometimes other locals are in his store so I could always get the local gossip. 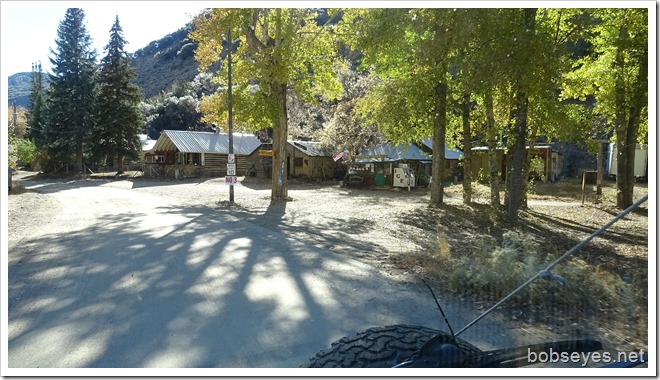 But first I drove up through town to have a look. I was hoping to find a local out and about to ask some questions but no one was about and most of the stores were closed until the weekend. 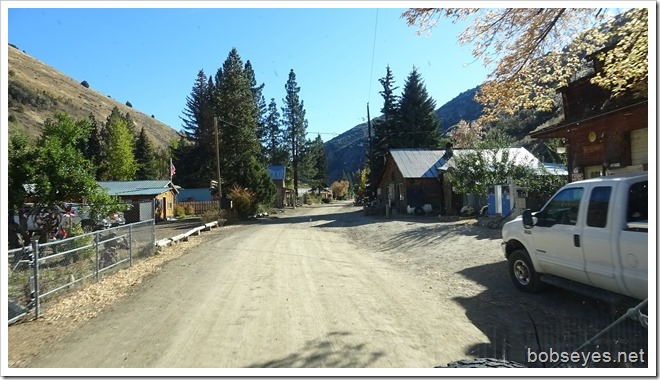 A lot of noise up the hill

I was curious to know what the big machine I could hear up on the hill above town was all about. There used to be gold mines up there that’s why Jarbidge is here in the first place.

When I could find a spot to see up there I took this picture of the machine working up there, but I found no one around to ask about it. 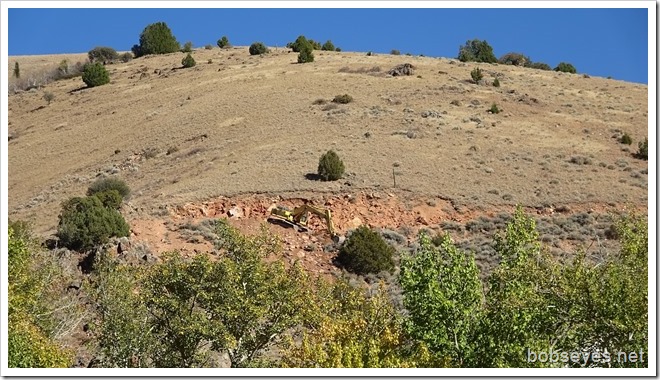 I drove back though town and stopped at Ray’s trading post to read the signs. 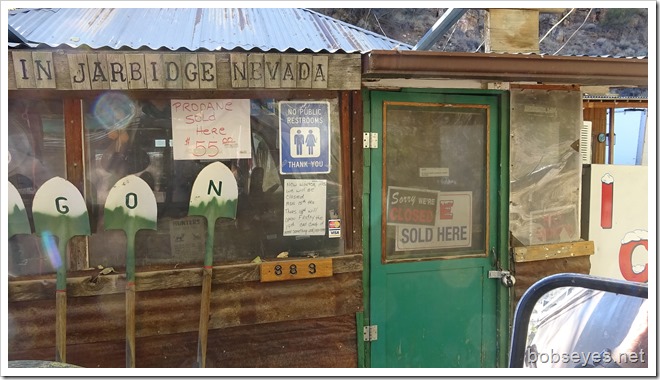 Seems they were closed until the weekend for winter hours. A lady wrote the sign and not Ray so I was wondering, so I drove up the street to where I knew his house to be and his yard was all covered in leaves like no one was there so maybe he’s gone or not well.

More mining on a steep road

The road by Ray’s went up the hill by some power lines that is real steep, but I noted two forestry trucks come out of it and I knew they wouldn’t drive that kind of road as it’s mostly a down road and too steep to get up. I knew because I was sucked into coming down it a long time ago. Ray told me to come down that road as it was a fun one. Sure, it had six inch diameter rocks on it and was almost straight down, but we made it.

I had a look and it looks like they are doing some mining up there too so they must of improved the road but I didn’t go up there to find out.

Finding a camp spot for the night

It was getting late in the afternoon so time to go find a camp spot for the night so I drove back out the main road a ways. The Jarbidge river goes along the main road in. 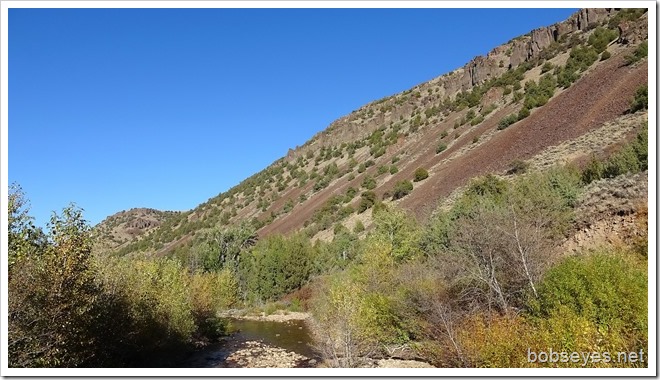 I found this spot along the road. The river is on the right and I was hoping there might be some sun in here in the morning to warm things up a bit. 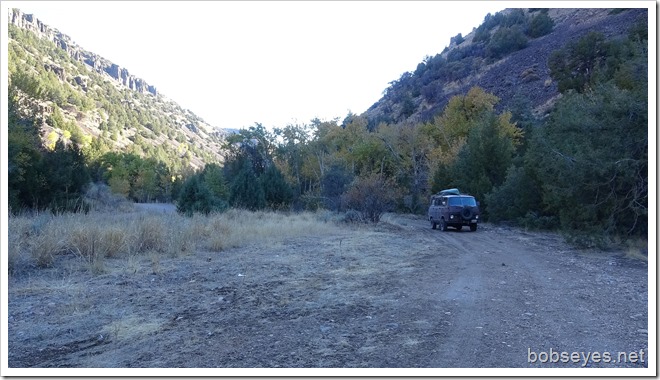 Tomorrow I plan to drive over to the Diamond A Ranch which isn’t too far from here. I may be able to post from there if the lady is home or maybe not.