Rain and the broken mail box

It was raining on and off this morning when I got it going around eleven. I looked at the weather in Jenner and it looked like rain and wind all day, so I wasn’t going yakking today as it was also a bit on the cool side.

Eventually I went out to check my mail and found my mail box door ajar and broken. Seems the rivet on the right side was gone. I thought a bit about what to do to fix it up and decided a pop rivet would be the easiest thing to fix it up , so went back to the garage and found my pop riveter and a steel rivet after a bit of looking around.

I knew if I put the rivet in, in the normal way, it would be too tight to get the door open, so I didn’t clamp it down all the way and cut the draw down pin off with some wire cutters and that took care of that. I was thinking of doing the other side too as it looked like it might fail sometime soon too, but it was too much work to get it off so I’ll just wait until it fails, especially since the rain started again. 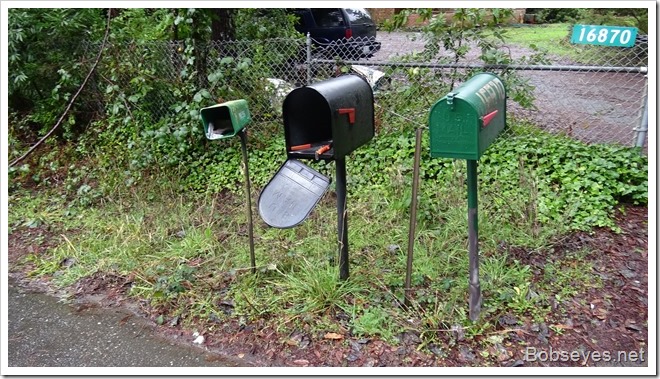 Not a brush picking up day

I though about picking up some of the brush that I had pruned, but it was too wet and I’d get real wet doing that, so I went back in the house.

I was taking it easy thinking I might drive down to Jenner to see how things were, but the rains kept coming down so I thought better of that and just stayed in the house.

Got sucked in with the gold mining video

As I was checking out my You Tube channel on the computer, I saw a gold mining video, so I watched it. It was a video of an old guy explaining all the stuff in a small gold mine that he had worked until he was mostly too old to do much more in it. It was interesting as he explained most of the tools and stuff in a tunnel type mine in detail. He helped me understand a lot of what I’ve seen in those old mines that I had only speculated on in the past.

And even more gold mining videos

After watching that one, I watched a couple more gold mining videos that went from big mines to little mines, placer mines and gold panning, then I watched one on the California gold rush.

Now, why might I have an interest in all this?

Here’s the reason why

I’ve spent a good deal of my life traveling around and exploring around the western United States four wheeling and hiking around the area. I’ve investigated lots of old mines as I traveled around. I’ve also four wheeled a lot of the western routes the travelers took to get here from the east, mostly in Nevada and through the Sierra Mountains of California. There are a number of different trails they took to get here, all mostly very rough to travel.  Checking out the old routes the first people to travel west took, it was easy to see I had a much better time traveling these routes than they did in my four wheel drive. No motors in those days. And with all the animals and people traveling the same routes, water and food was very scarce.

My friend Marty and I explored a big placer mining area for a number of years where his family had had an old cabin before it got burned down. We hiked all over the area exploring the workings and all the old tunnels they used to get to the gold. The place was called Moore’s Flat and was a pretty big mine at one time and they moved a lot of dirt and boulders with the big water cannons of the time. It is near a now state park called the Malakoff diggings which was another huge placer mining area and also home of what is known as the Clampers ,a group of people that believed in partying on.

One of my uncles had some gold mining claims near the town of Downieville California which are still in the family.

My dad worked it more than anyone else

When my Dad retired his retirement present from his employer was a gas powered winch for the purpose of dragging rocks and boulders out of the North fork of the North fork of the Yuba river that was mostly creek size where the old cabin was. He had a five inch dredge that he also used to help suck the gravels out to get down to bed rock. I remember I built him a small box out of  metal, shaped a bit like a canoe which he would load up with gravel and pull with his winch to move gravel out of he hole he was working on. In fact he called it his canoe if I remember correctly.

He’d put his wet suit on and work the river from eleven to three in the cold water removing rocks, boulders and gravel until he got down to were the gold was on the bed rock, sometimes down to five or more feet deep.The gold is heavy and settles down in cracks on the bed rock, so one had to remove all the rocks above that to get to the gold. After a lot of work, he’d find some pretty nice gold nuggets. But he was in it mostly for the fun of it and he’d usually get down to the gold and some one would come up to visit and he’d let them find the gold after all his hard work. He enjoyed watching their eyes light up.  He did this for a number of years until he got too old to do it any more.

Too much work for me

He tried to suck me into it, but I could see it was a lot of real hard work. There is still a lot of gold in the area. In the beginning it was said the first guys in the area could just walk up the river and pick up gold nuggets and put them in coffee cans and I believe the first guys did that, but after that one had to work a lot harder to get it, moving dirt and rocks and boulders.

But I did do a little mining

I did do a little gold mining there with my brother Mike one summer, well for a week anyway. We diverted a small creek by the cabin where it ran into the river and dug out some small nuggets just for fun. Most of the time I visited I just spent time fixing things for him like the pelton wheel generator they used for electricity for the cabin and just about anything else that needed repairing, but most of the time I spent exploring and checking out where others had done some gold mining. It was always interesting to try to figure out what they did with was left to see.

Here’s a picture of my Dad. Wallace Bunker Noble Jr. 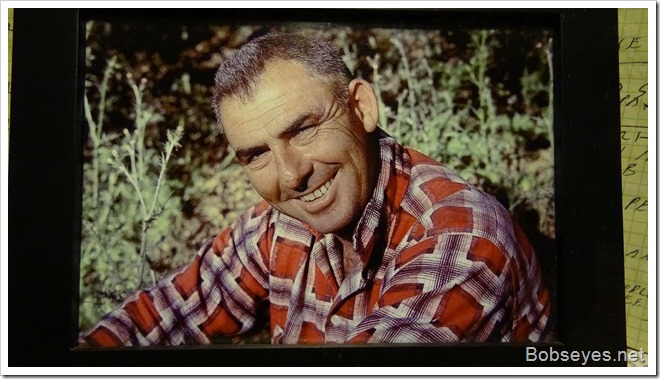 So anyway, that’s why I spent the day watching old gold mining videos.