I was bound and determined not to spend another day in bed all day resting up. So let’s get on with it.

Around 2 I drove on down to see how the river looked at Monte Rio. We had a little rain the other day which usually muddies up the river and slows the fishermen down for a bit. The parking lot at Monte Rio was almost empty so I knew the river was likely a bit muddy and decided to drive on down to Jenner as the weather guys said the wind would only be around 4 miles an hour which is just a bit more than a breeze.

I have the water to myself

There weren’t any other boats in the water as  put my boat in at the ramp and paddled across to Penny Island. The water was muddy which is no concern of mine since I’m not fishing and can’t in this area anyway. And the 4 miles an hour wind was  about that but cool. And the wind was blowing down river which isn’t normal most of the time and meant all my up river get out of the wind resting spots would have wind in them today with the wind blowing in that directions.

I stopped here on the side of the island to decide what to do. I had planned to go up stream at first but with all my break areas windy I decided the mouth area might be better as it’s sorta protected from the wind when it blows down river like today. So I pushed off in this direction moving along the island’s edge. 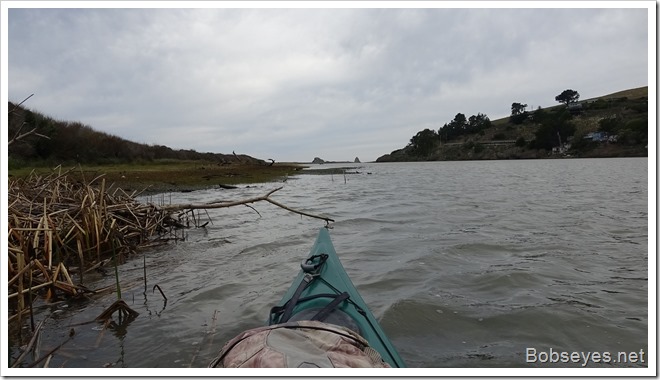 I’m at the bottom end of the island here and just ready to paddle across the river towards the mouth area at the ocean. Not too sunny but no  matter, I’m out here. 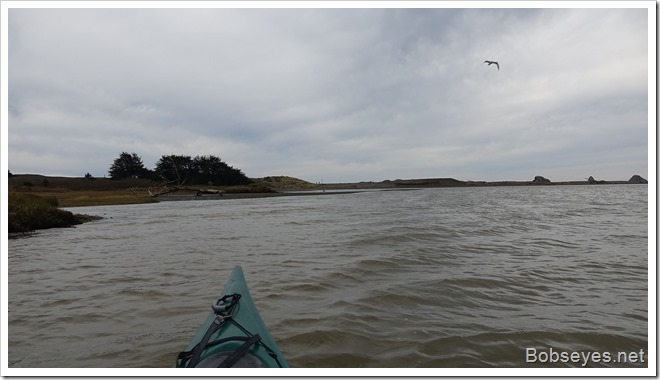 I’m paddling across the river headed straight ahead down as far as you can see a half mile or so where the mouth is and he ocean too. 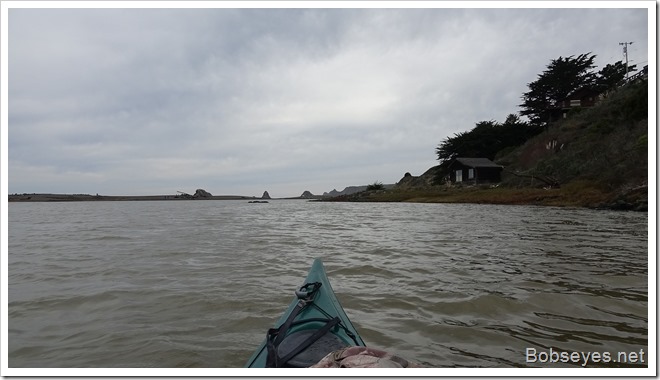 I’m getting closer to the ocean and can see the river’s mouth is open. 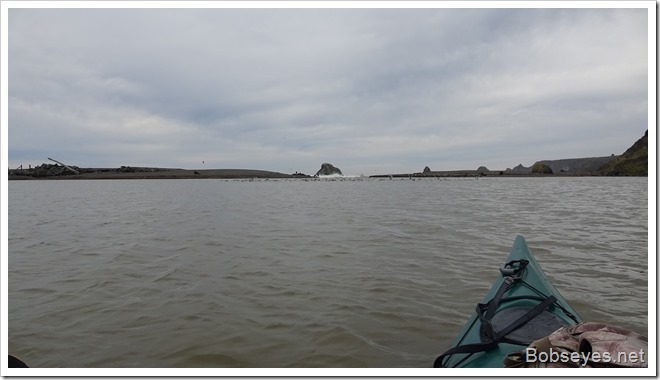 It’s open and there are a lot of birds in the water, mostly washing and resting. 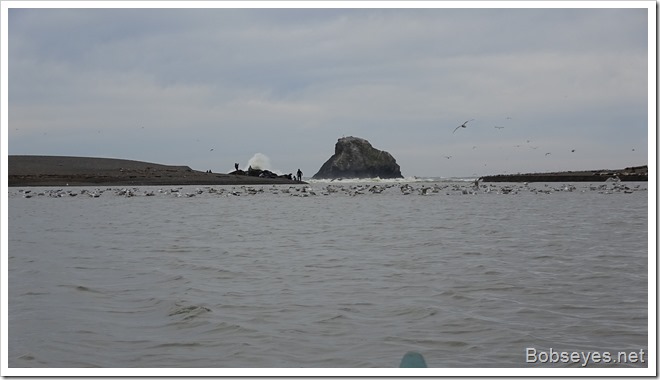 To the left of the  mouth there were some harbor seals and some people watching the ocean which is on the other side of this sand. 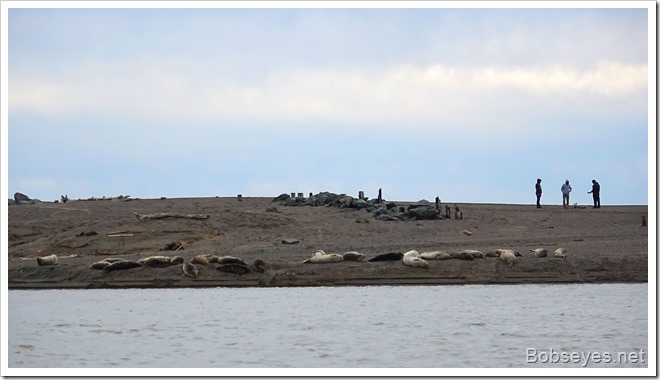 Over on the right side of the mouth there were a lot more seals resting on the beach. 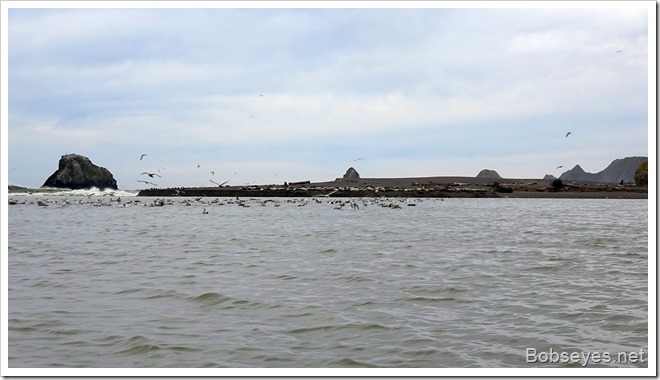 Here’s a few of those seals. You can see they are mostly napping. 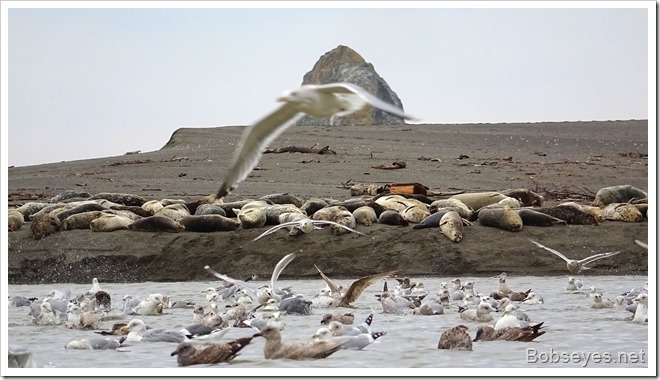 The tide was out but there were a few big waves hitting the shoreline.

I sat here and looked at the ocean for a bit out the mouth. Good thing I’m on this side of the sandy beach. 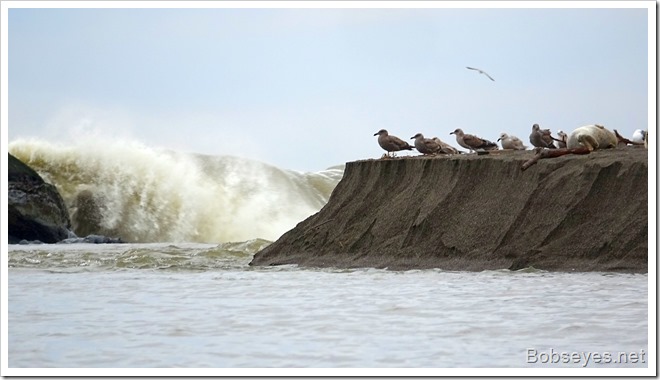 I was looking for a place to sit in my boat and watch things so I headed down to the end of the river down that a ways by the big round rock. 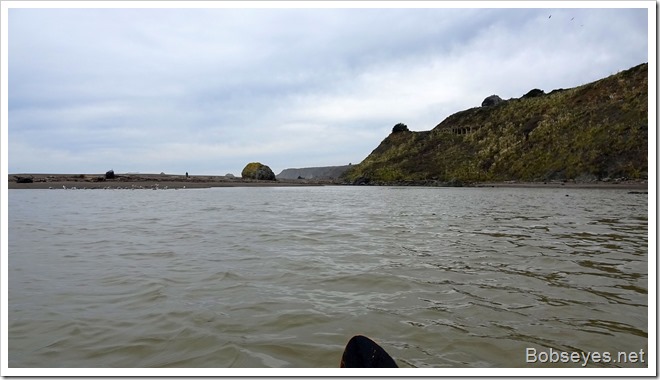 There’s the rock with a nice little slot in the water by it. I noted the guy hunting for treasures by the rock and paddled on over. 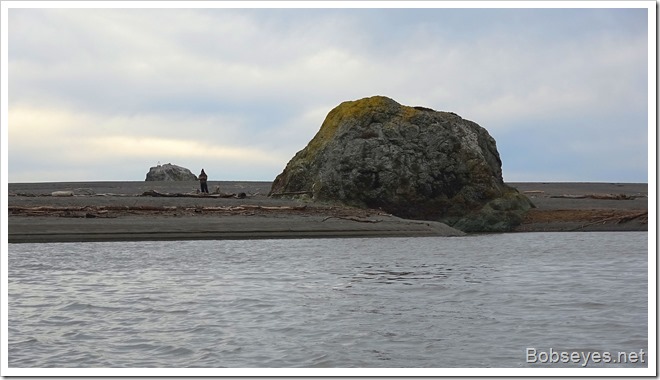 I paddled into this slot and as you can see it has some fairly good wind breaks. This rock is called Haystack Rock. It gets some kind of growth on it that is yellowish which you can see a little of on top and it’s sorta round so I think that’s how it got the name of Haystack Rock. 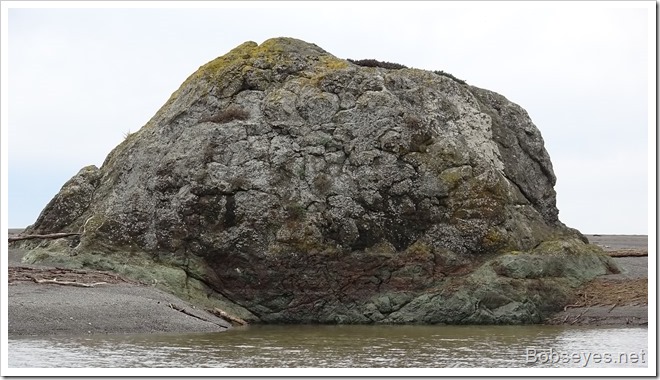 I’m sitting there thinking this is much better than being back at the house in bed and just enjoying the day. 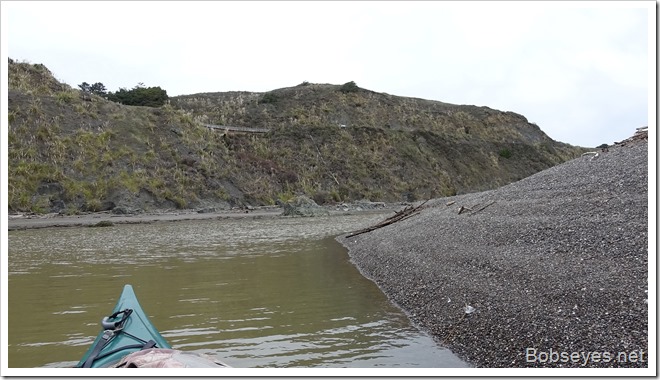 Eventually the treasure hunter guy came close so I asked if he was finding any treasures. He said some and said he was an artist that made bowls out of drift wood without carving the piece. He just found natural ones, and some how made them into pieces he was selling for 15 to 30 thousand bucks. He did say he usually had to cut the price by half to sell them but hey, that’s a lot of bucks for a little piece of wood.

When I asked how he was doing he said he wasn’t doing too well as his he just broke up with his girl friend which he was madly in love with and was having thoughts of ending his life so we had a bit of a talk about that and art in general. I injected a lot of my life’s experiences and advised jumping off a cliff doesn’t really solve anything and gave him quite a bit of my life’s wisdom about that and about life in general. At least he was smiling and thanked me as I left.

Pushing into the wind

I pushed off out of that little slot and out into and across the river and up along this shoreline and went around the point on the left where the wind picked up to about 10 miles and hour and cold too. 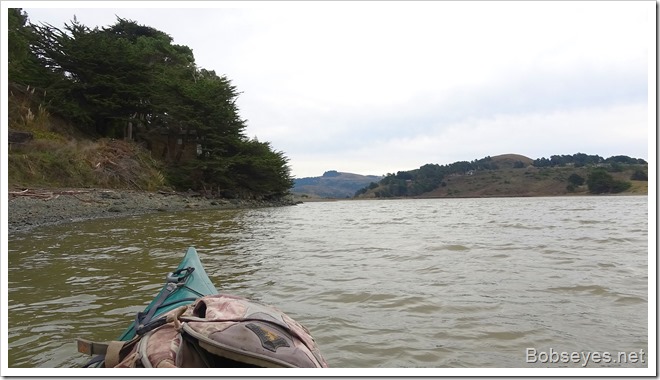 Like I said the wind picked up here and I was also in the main river current. The wind and the current where going against me and if I stayed on this side of the river it would stay that way all the way back to the boat ramp you can barely see up ahead, so I crossed over to the island on the right and went up along that which was much easier. 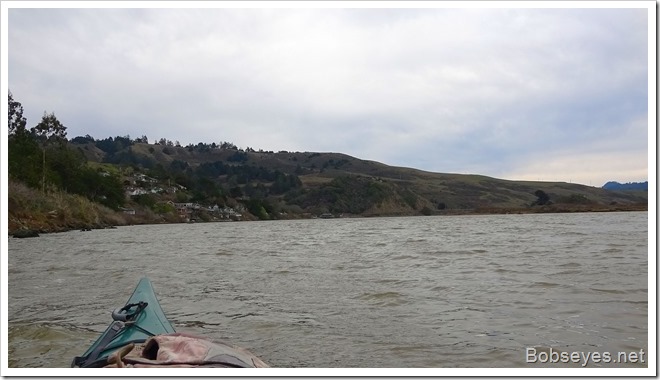 I considered going up the river more but the wind was up and now it was a bit cold so I headed on back across the river to the boat ramp and pulled out for the day and drove on home.

At home the sun had already gone behind the hills to the west and so the day was cooling down and it wasn’t too warm to start with.

I gave the chickens some feed and went on in the house and that was it for the day.

Nice day I’m glad I made it to the river.