8 inches of rain over night

That big rain storm came in last night and the wind howled. I was watching my camera in the chicken coop when all of a sudden the pipe tube feeders went horizontal which meant a big gust of wind just hit the coop area.

Part of the roof blew off

I knew I had two steel panels not fastened down properly so I went outside to see if they were still on the roof or not. Or not won.

The two panels I didn’t have fastened down good blew off and were on the ground. I checked the chickens and they were still in their roost, but there was no roof above them and they were getting wet so I messed with the sheets and got them back over the chickens and hoped no more wind gusts like that happened again during this storm. That was around two AM if I remember right. It was raining good and everything was a bit muddy and wet but I got er done.

When I checked the rain bucket in the morning it showed just over 8 inches of rain fell last night from that storm and still more coming.

Fixing up the roof panels on the chicken coop

First job today was to get that roof fixed up properly. So I removed the two loose sheets and riveted them together to make them long enough. I had put screws in there originally but pop rivets work much better. 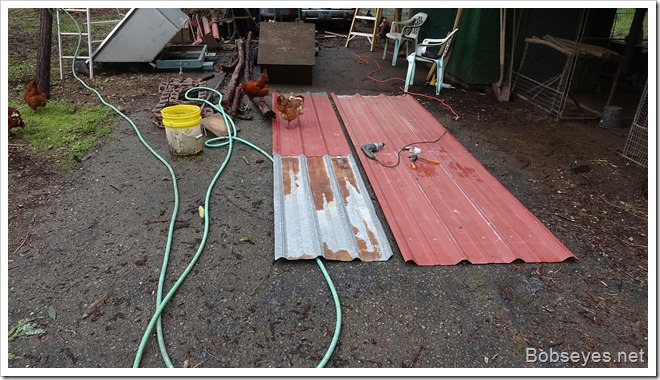 A close up view of the pop rivet work. 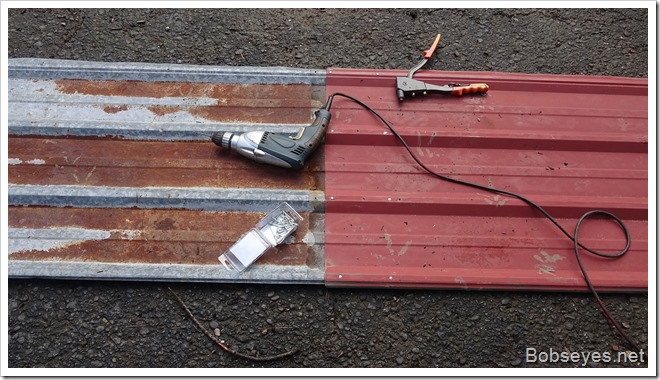 Fastened the sheets down good

I put those sheets back up and screwed and wired them down then repaired a couple other sheets while in the process.

That should do it.

Here’s what happens when a chicken jumps up on your knee when it’s real muddy out. 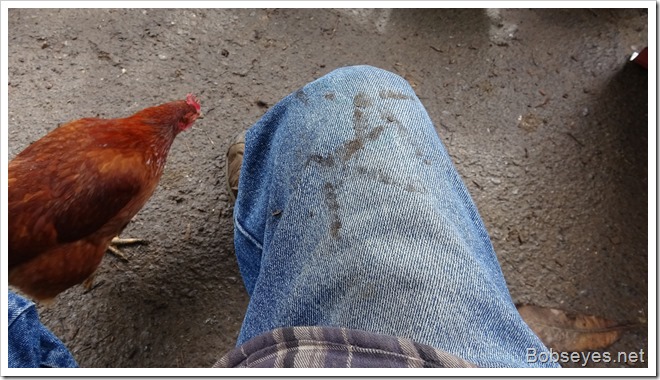 I let it dry out and then it brushed off mostly on it’s own. Just dirt.

Motorcycle to check out the flooding in Guerneville

After the work I decided to take the motorcycle up to the ridge top to see what I could see of the flooding down near the town of Guerneville.

I had to stop once in awhile to move small trees off the road on the way up. 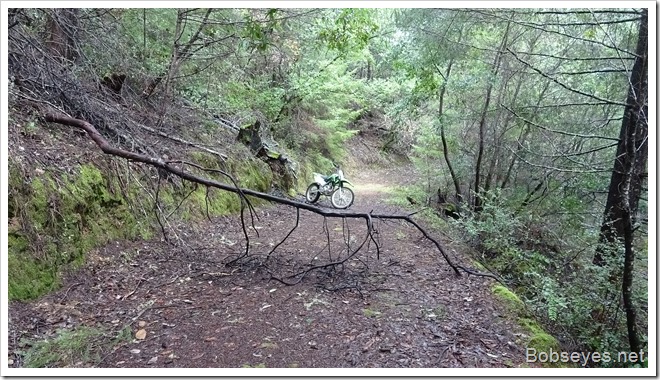 Getting a bit wet

It rained lightly on my ride all the way up the hill and I was hoping it’d stop when I got to the ridge top as it’s all out in the open and not under the trees like my ride up the hill.

I got on the ridge top and rode on down to the end where the overlook is located just up ahead. And I was lucky as the rain stopped for bit. 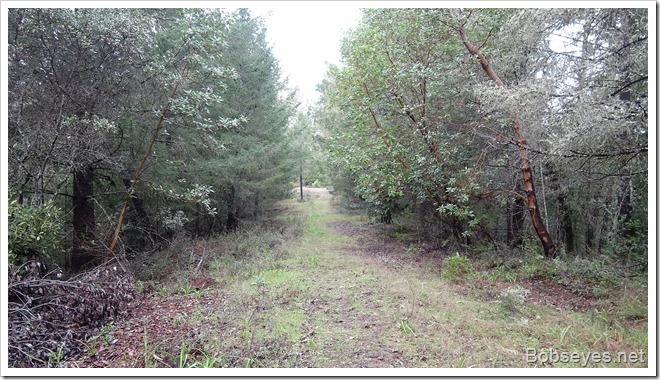 Town of Guerneville with flood waters

Looking over the ridge to Guerneville it looked like this. You can see the flood water is right up to the edge of town. 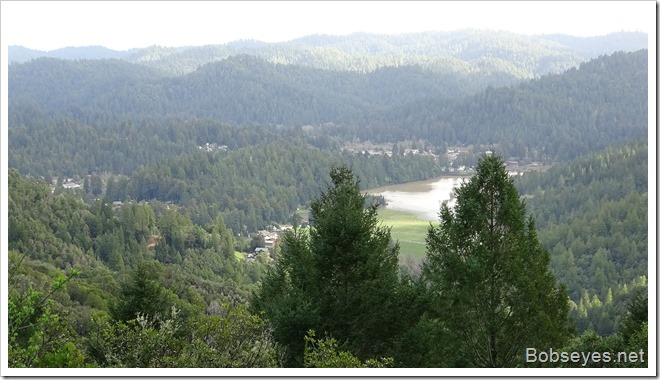 A little better shot of the flood water. 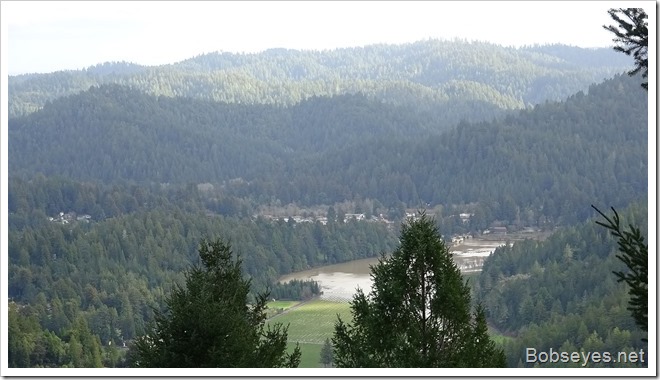 I took a different route back down the hill going through here. Lots of water flowing down the hill because of last night’s rain. 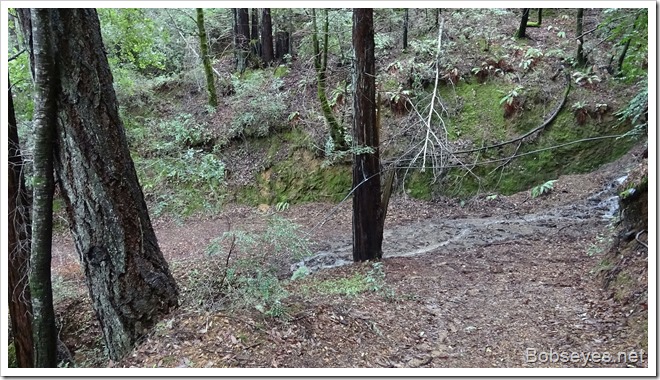 I rode on through this road headed for our water tanks at the bottom. 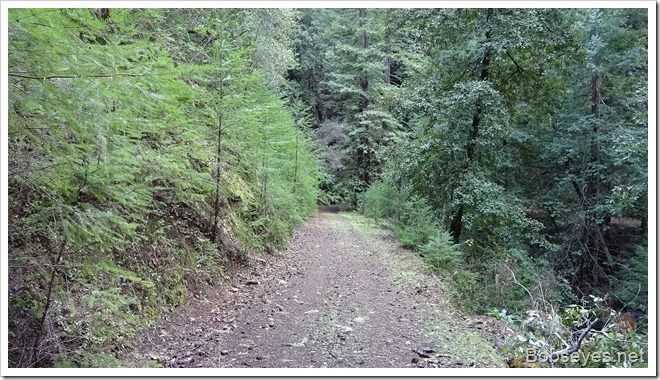 This is the creek that flows by our water tanks. 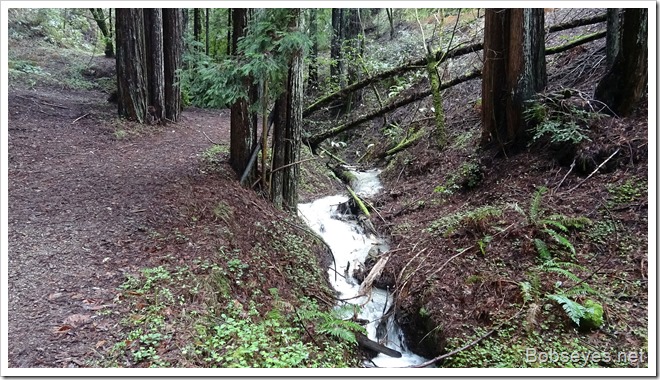 The water tanks are full and over flowing as they should be. 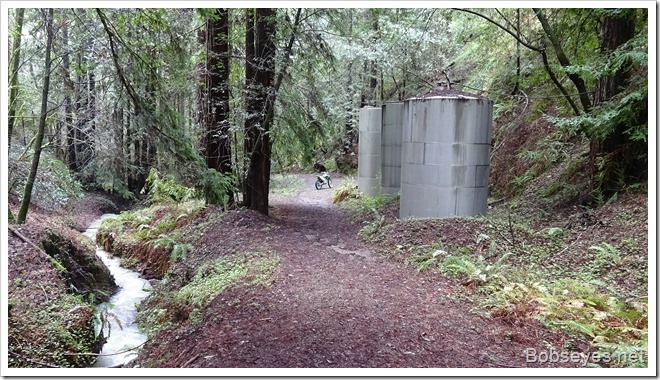 I continued on headed back home down through this road. 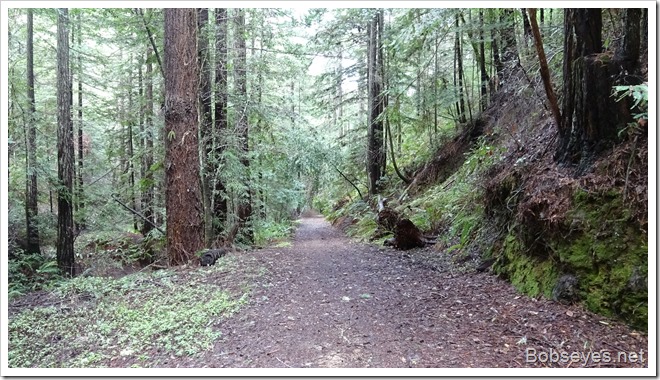 Wood chips on the coop mud

Once home and after a break I went back out to the chicken’s pen to see what I could do about some of the mud  in there from having such a leaky roof last night. A wheelbarrow full of wood chips helped out a little, but it won’t take the chickens long to mix all the wood chips back in with the mud so it’ll be back to mud soon.

More rain coming tonight but not as big as last night.

That was my day working and having some fun too.