Best Way To Avoid Work Is To Go For A Paddle

The best way to get out of working around the place is to go kayaking down at the river, so I went on down to Jenner today.

I thought John S. might want to go so I stopped in at his house and shot the bull with him for awhile. He’d just come back from fishing so was in for the day.

I continued on down the road to the river about 20 miles or so on a very scenic highway down along the river.

When I got to Jenner the wind was down with a bit of fog waffling around and a bit overcast but actually real nice.

I put  my boat in the water after chatting with some people at the boat ramp noting the water level of the river was high indicating the river’s mouth was closed to the ocean again which makes it nice like a big lake in the river down here.

So I paddled across the river and decided to go down and have a look at the closed mouth area going down along the island here. 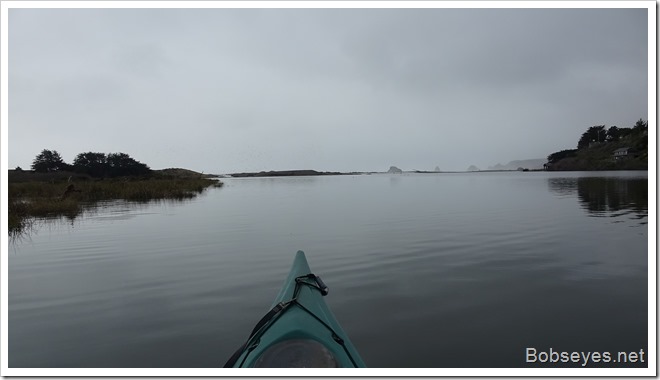 Here’s the ocean waves breaking over the beaches in the fog as I approach the area. 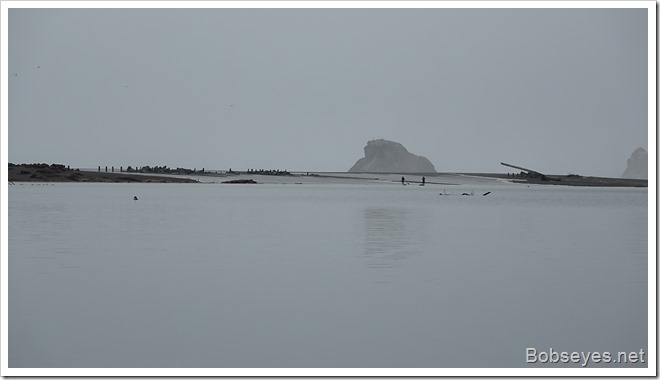 When the waves come into the river they bring a lot of foam which some people think is some kind of pollutant, but in reality I understand all this stuff is mostly dead plankton from the ocean so it would be considered a nutrient. 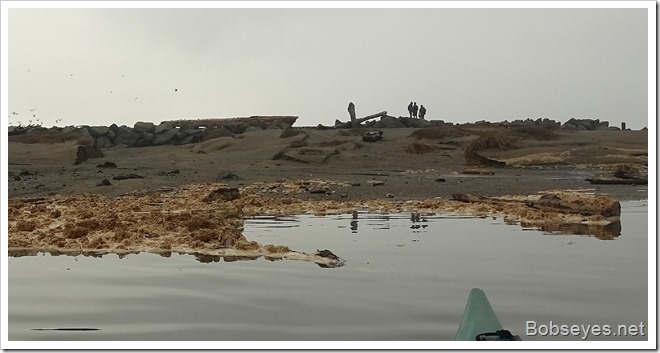 Here’s where the river’s mouth usually has been going into the ocean, closed up. 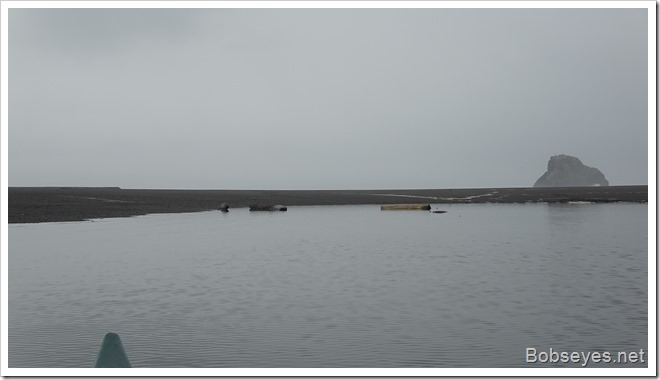 I saw some tracks in the sand that looked like my quad runner tracks. Nope, harbor seal tracks crossing back over to the ocean. The sand is about five feet above the river so the river  has to rise that high before it can break it naturally, which  means there’s going to be some more flooding in the Jenner area. The ocean is on the other side of this sand, hard to see because of the fog. 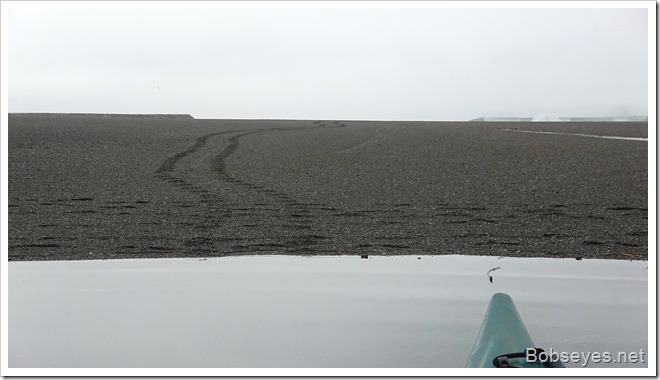 Over to my right were a bunch of harbor seals resting on the sand. Here’s some of them. 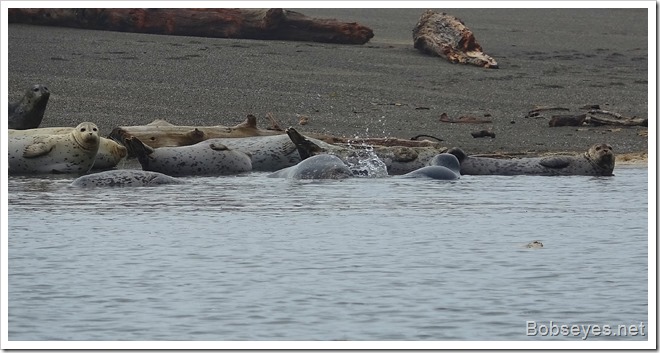 And another one kicked back resting. 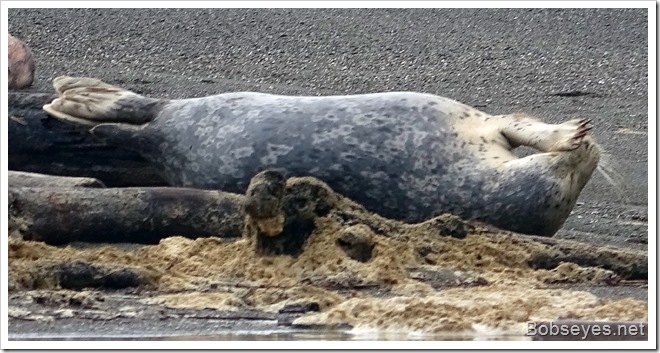 I went on by the seals and down to the end of the river where I ran into even more foam and lots of wood debrie that got washed over the sand from the ocean and that’s as far as I could go as the stuff was too thick for me. 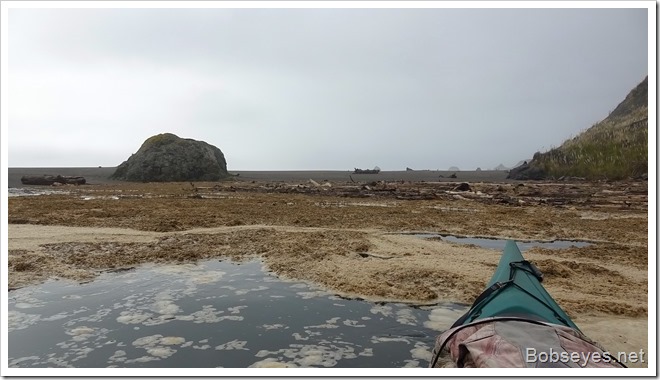 I turned and headed back up the river when I heard some radio type squawking up at the highway overlook, so I looked up. Some fire guys were up there with their truck, They do a lot of rescue work along the coast and on the rural road along the coast line. 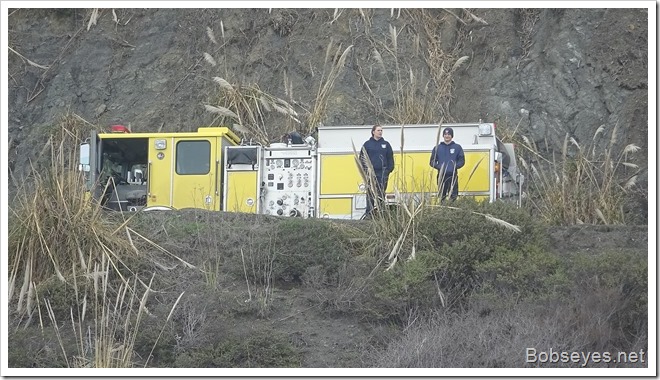 So anyway I headed back up the river going by these seals in the water. They like to follow me staying behind where I can’t see them. 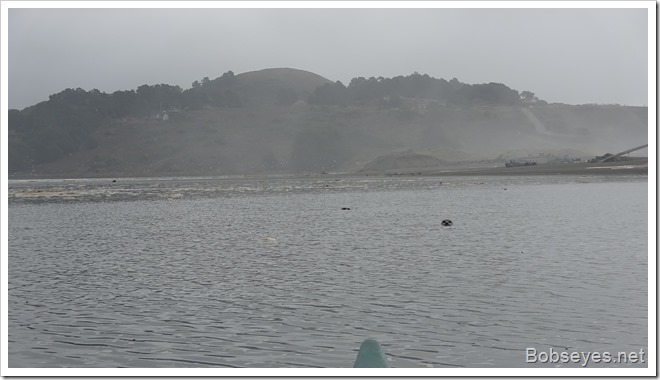 With the water up this high I knew I could paddle onto the lower part of Penny Island so I paddled on in and turned and sat here for awhile just enjoying the day. This is looking west where I came in. 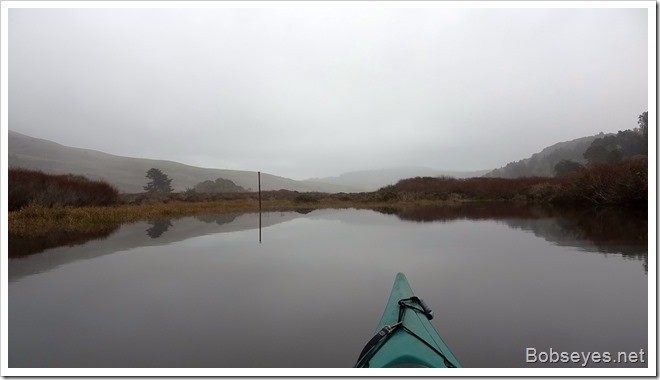 I’m paddling back out to the river, off the island and going to continue heading up river along the island’s edge. 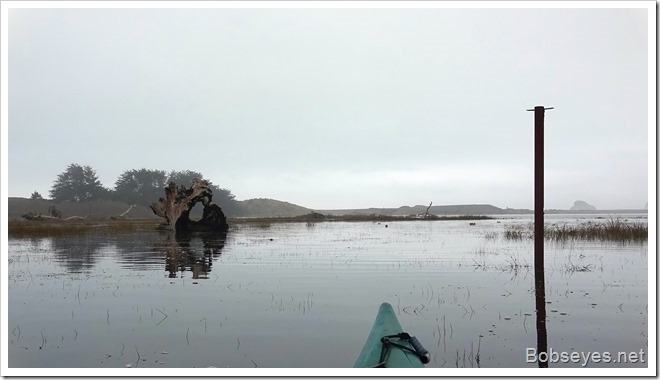 I made it to the upper end of Penny Island a favorite spot of mind to just sit and watch and enjoy. 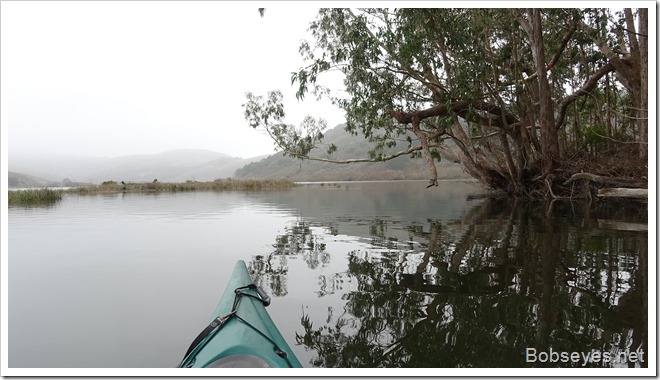 I was sitting here when I heard some big splashes behind me so I turned around to see what was up. 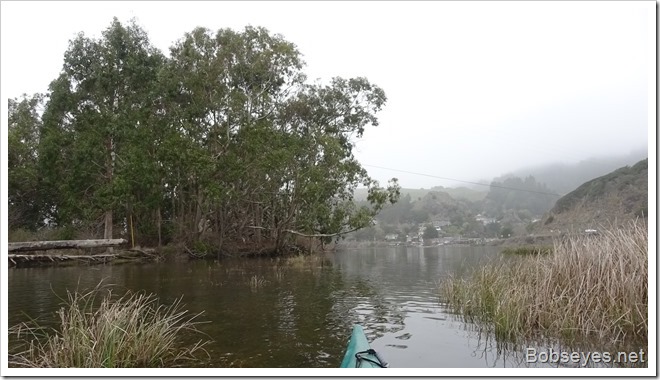 A harbor seal was on the hunt for big spawning fish along the shoreline. 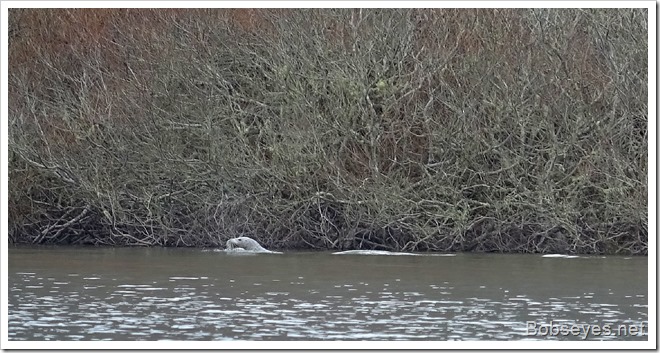 From there I headed on back towards the boat ramp. As I crossed the river to the boat ramp I looked down river and this was my view. 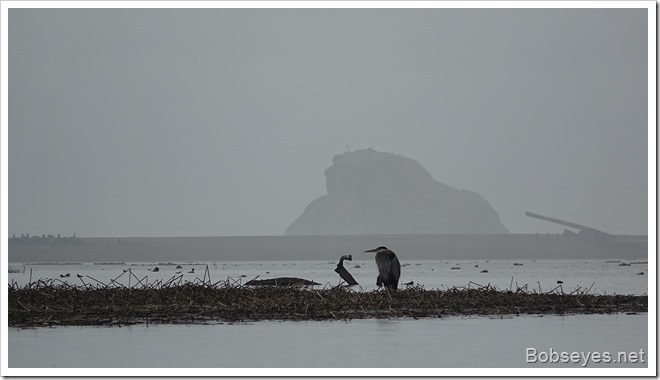 I loaded my boat and headed for home stopping at Monte Rio to check out the boat ramp to see if anyone was still fishing for the day. It was late in the day but one  boat came into the boat ramp before I left. Maybe I’ll kayak here next time to visit with some fishermen.

Back home I checked on the chickens on the adult roost. This is from a camera I have in the pen that connects to  my computer so I can see what goes on out there.  The light  is on for a few hours to extend the daylight which is supposed to improve egg production this time of year of short daylight hours. 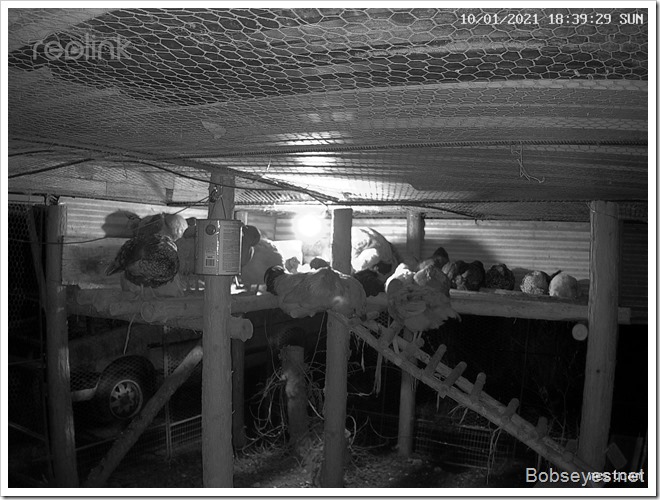 Nice day paddling around Jenner and visiting with people down there.