I heard a motor bike outside this morning and I wasn’t ready to get out of bed yet. It was my brother Barry with his dirt bike and he was going for a ride up into the hills, hopefully before the next rain was going to hit in the early afternoon.

I got my clothes on and went out and joined him, putting on warm clothes as it was cool out and damp.

We rode on up to the hilltops to have a look at the clouds and any possible rain. So far, so good as there was mostly just clouds. 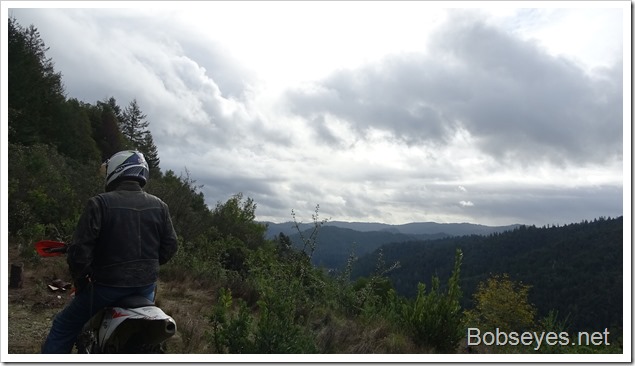 This was the view looking west towards the ocean where most of our rain comes in. We were pretty safe from the rain until you start seeing showers over on those hilltops. 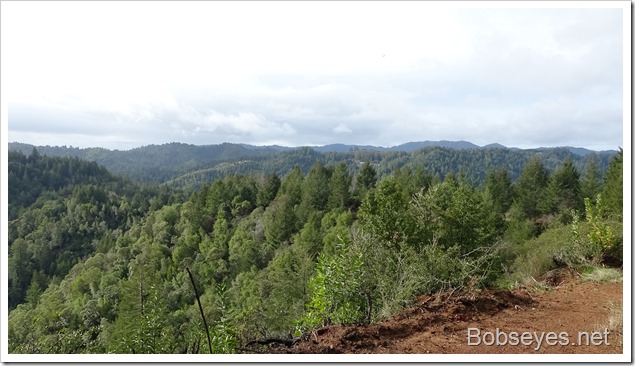 We rode around the hilltops and stopped here to have another look. 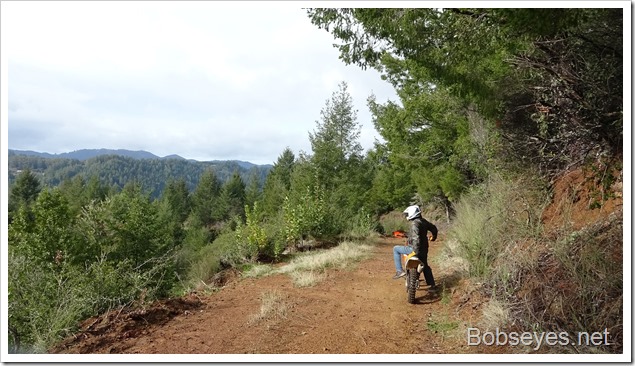 Barry stopped here and I asked, What’s up. He said he needed to look for a small Christmas tree so we walked around looking for a good one, a small fir tree. 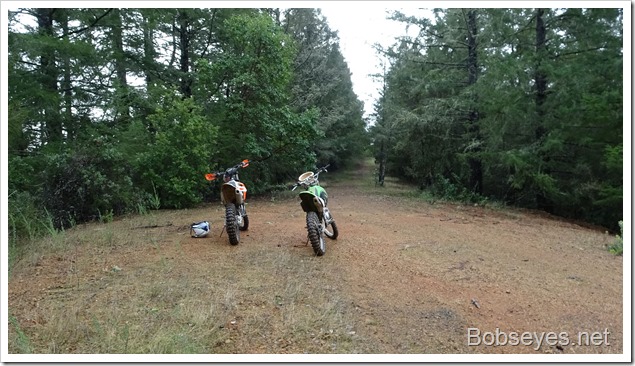 We walked on down this little road looking too. He spotted a couple small trees that might do. He’d come back later with his saw to get one. 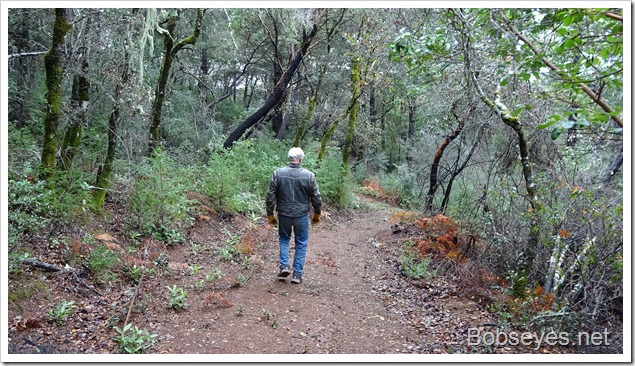 It started to sprinkle lightly for about a half hour but then let up.  It was light enough that we didn’t get wet.

I tried to ride over that little tree Barry is lifting off the road when the bike fell over. It didn’t hurt but it took a bit of time to extract my leg from under the bike. Barry decided to move it off the rode as he almost fell over crossing it too. It was real wet and slippery, so the back tire slipped sideways on it and down I went. 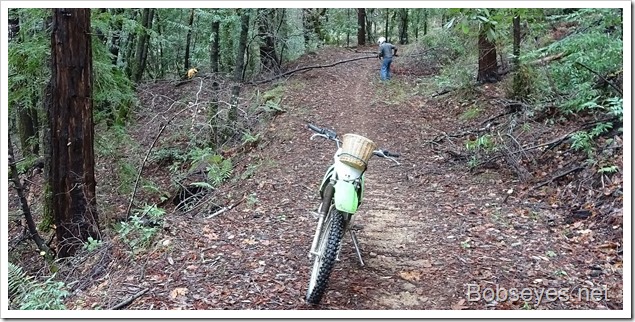 We continued our ride down this road. 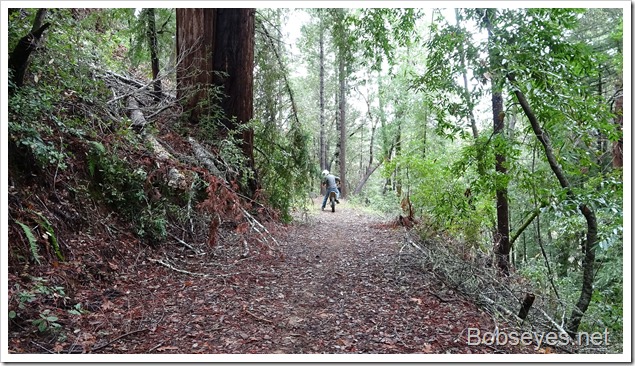 Barry got half way over this one but got stuck and couldn’t get the back tire over it. 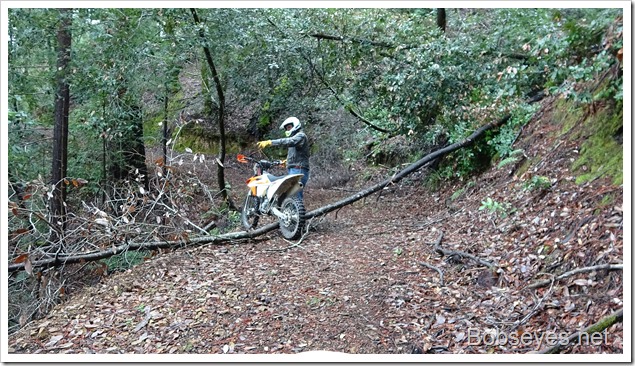 So he backed off the log and we moved it off the road so we could continue up the road. 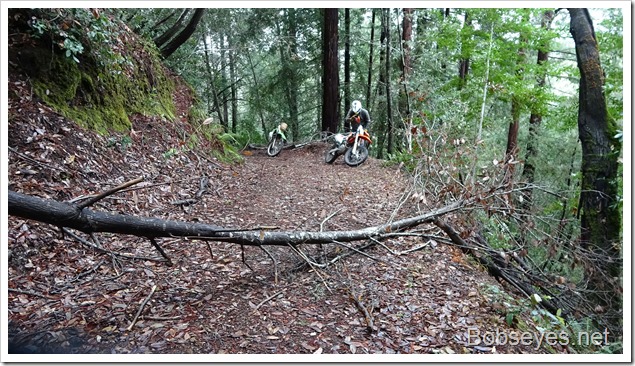 From there we rode around for quite some time before running into this brush that we stopped to remove. 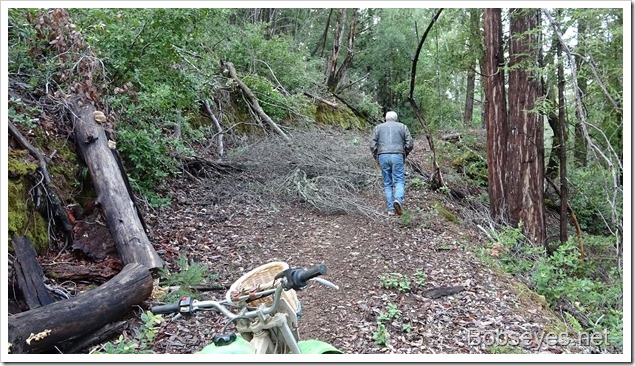 Barry was making a sharp turn to the left and locked up his brakes and the bike skidded and fell over. Since it had just rained, the surface was real wet and slippery in some places. It was so slippery here, I was barely able to stop without running into him. 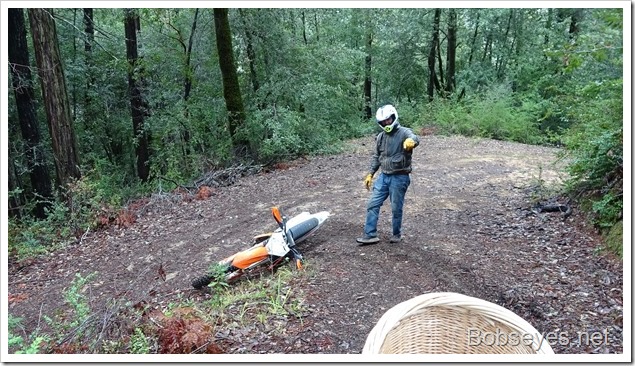 We had a good ride so we headed on home.

It started to rain as Barry was loading up his dirt bike so our timing was pretty good.

Barry took off for his place and I went in the house and started my wake up routine, even though, it was a bit late.

When I checked the game cam for pictures there was one rat working over the bait and I had run out of the bait, for now.

And I spotted this red squirrel climbing the avocado tree to eat them after day break, on the game cam. 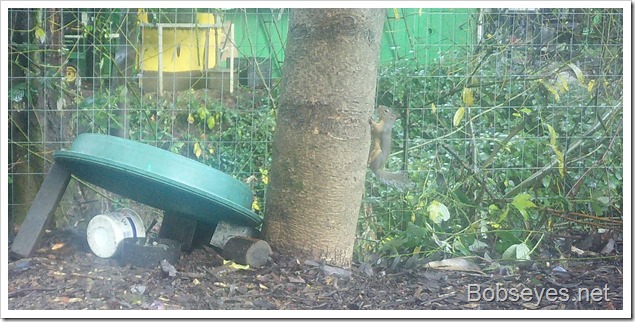 During a break in the rain and when it turned to showers, I did this to the avocado tree.

Just for fun and to see what they will do, I put this piece of plastic around the base of the tree to see how they react to it. I know it won’t stop them, but  maybe it’ll slow them down just a little. 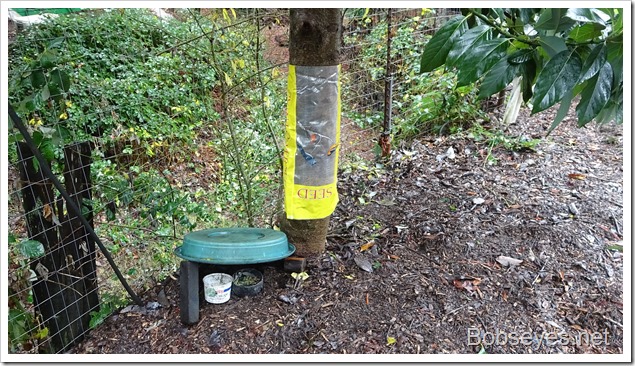 Between showers, I spent some time out in the yard with the chickens, just enjoying the day. 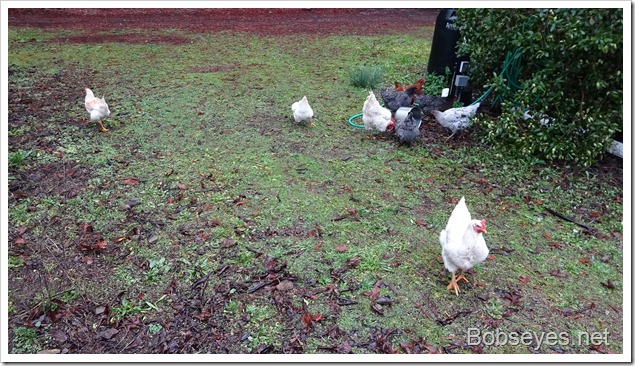 (Visited 86 times, 1 visits today)
This entry was posted in Uncategorized and tagged dirt bike ride in the forest. Bookmark the permalink.