I was wondering about this when I first heard about it. There were people on YouTube saying baking soda will kill rats but no one was offering any real proof, which isn’t real easy to do since a poisoned critter usually leaves the scene.

The hype sounded good. Rats and  mice can’t fart or burp so when they consume the baking soda, it expands and they puff up and die. And the baking soda is safe to other critters as they don’t have the no fart and no burp problem the rats and mice are supposed to have.

Since I was having a rat problem in my  chicken pen I mixed up half baking soda to half ground oats and put some out in a bait can and put my cam that is hooked to my computer out there to record any movement around the bait can so I could see for myself what might happen.

I had a lot of rats come by and eat out of the bait can. They were real couscous but eventually most of them ate from the can,

Except the biggest rat that I think is a momma that has three medium little ones that ate well. I think these are the rats that  have been living in my attic and my garage.

The big Momma and the three little ones are what I used to figure this out as they kept coming back each night, still alive. And the thing about big Momma is she wouldn’t take the bait for the first three nights although she did check it out periodically

Her three little ones ate  the bait each night, doing so for  most of the night and came back alive each night after that.

On the fourth night big Momma decided the bait was ok and ate it like a pig all night keeping her little ones away most of the time as she was gorging herself.

Will she come back the next night after eating all that?

You bet she did and so I’d say the baking soda thing is a myth and doesn’t work at all on rats. Maybe mice but I doubt it. I can’t say as I didn’t test the mice.

If the baking soda really did what was claimed all the rats that fed the first night should of had a real problem but that didn’t seem to be the case.

Here’s the baited can with some little rats feeding there. 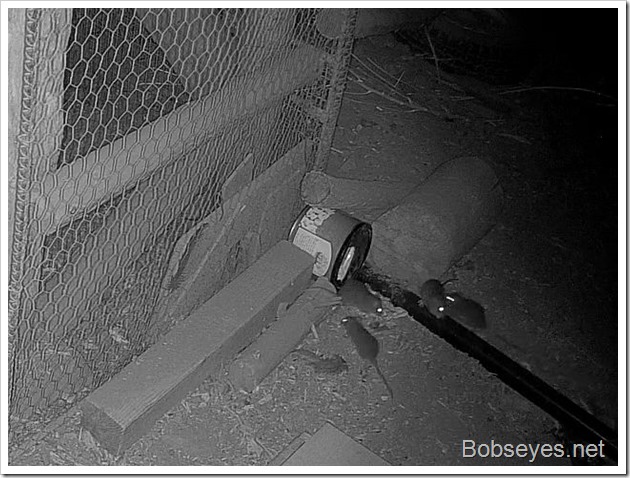 And here is the big one, Momma Rat the night she pigged out on the bait. 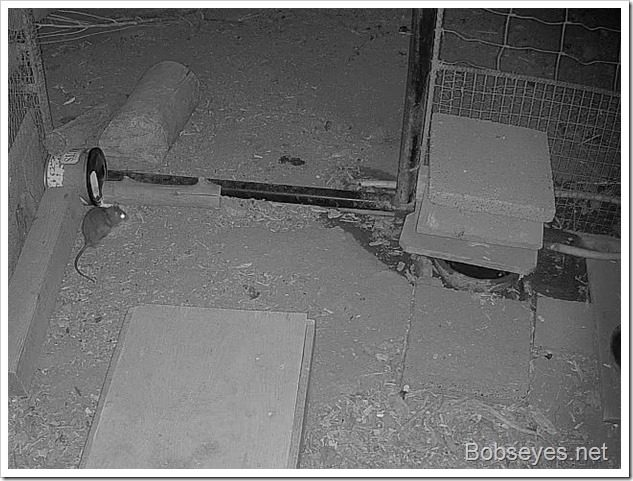 Tonight I plan to switch things up and get rid of the bait and only put out some chicken feed to get all the rats back eating the good stuff, then I can slip them some bait with plaster of Paris in it to test that out.

I needed a better camera mount in the chicken pen that I could move around easier so I made something I can just wire to the pen’s ceiling, a little board with wires to hold it up and a screw to hold the cam to the board. 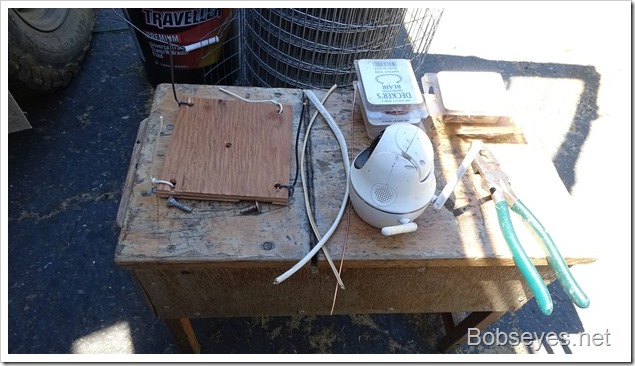 All mounted and ready to install in the chicken pen. 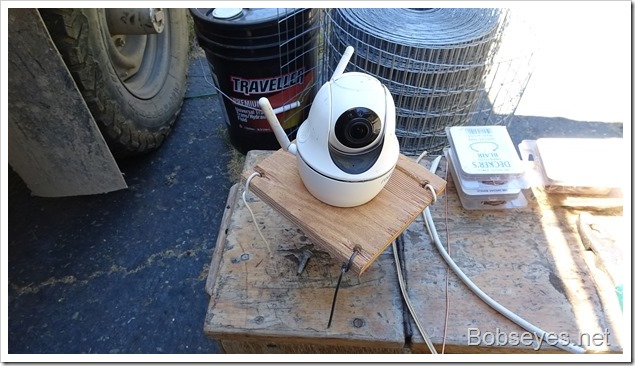 This  should work better as it now can look down on the critters and is easy for me to move to another spot when I want to. 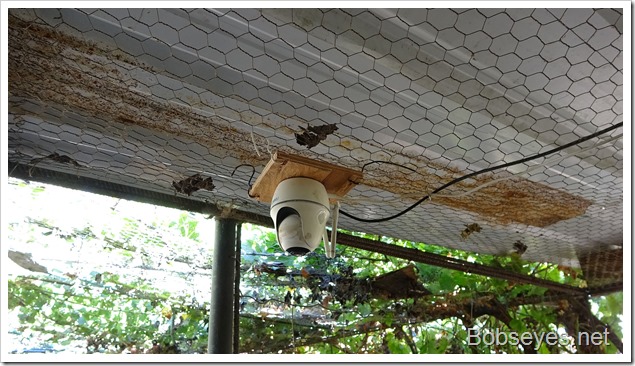 I put out some chicken feed in the white container and here’s the cam view of that tonight with some of the little guys feeding. The little guys are couscous but are eating the chicken feed. Big Momma has been by but I haven’t seen her partake yet, but she will eventually. 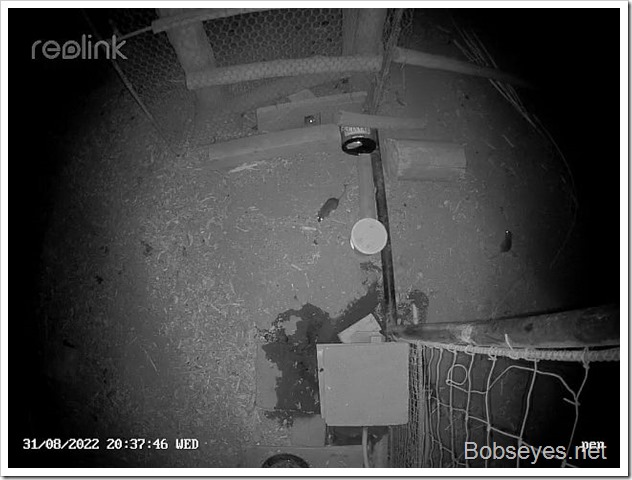 I also set up the automatic feeder in the new chicks pen. This feeder helps reduce rats with it’s higher sides so the chickens don’t kick out their food and with the door shut at night there’s not much for the rats. 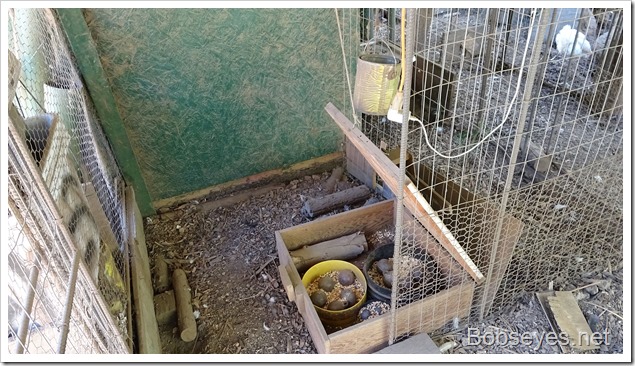 Out for a ride

Around five it was riding time so I headed up into the hills and rode the dirt bike around a bit.

Eventually I ended up here for a short walk. 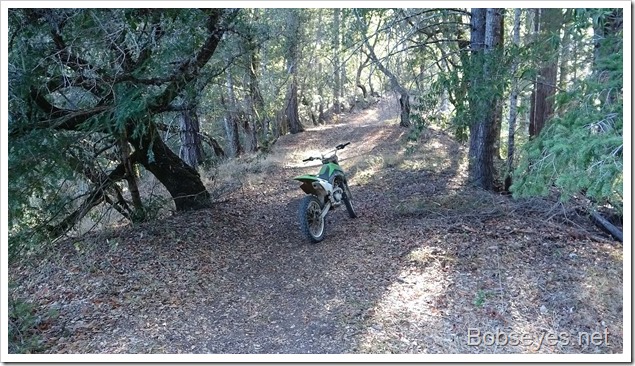 I walked out the trail here just enough to get a bit of exercise, not far. 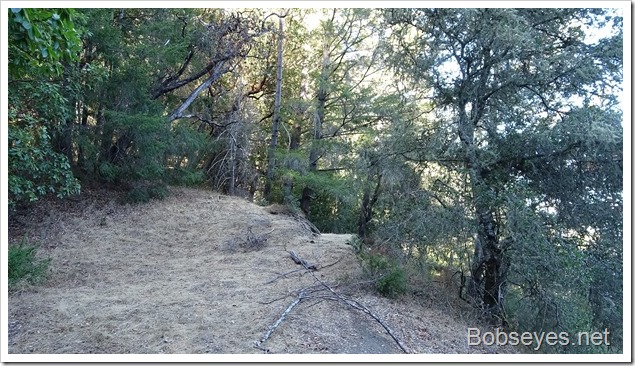 Then back on the bike and rode up this trail to the water fall area. 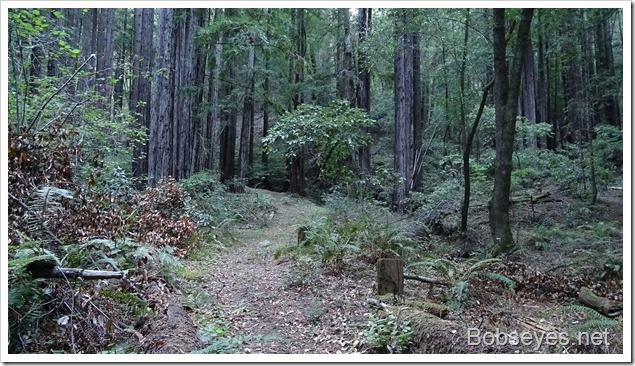 This is the view looking back from the waterfall. Not much water in the falls right now, it’s just barely wet. 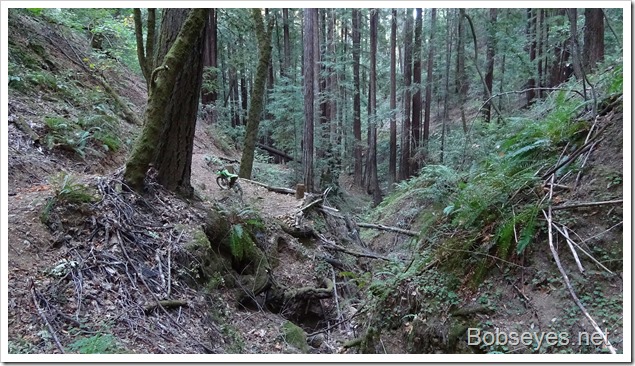 Leaving there I rode on down this trail and over to my brother’s garden area. 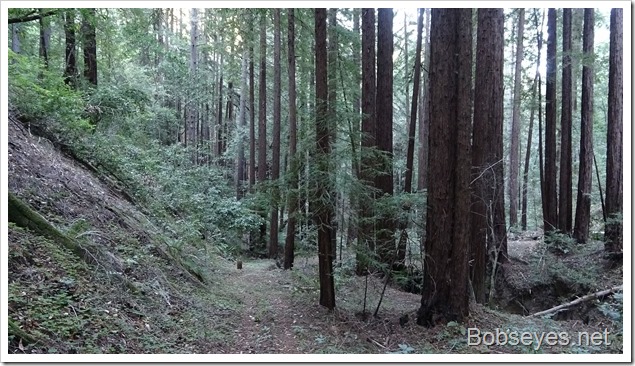 The dozer was parked there and the battery charger needed to be hooked up to charge the battery up. 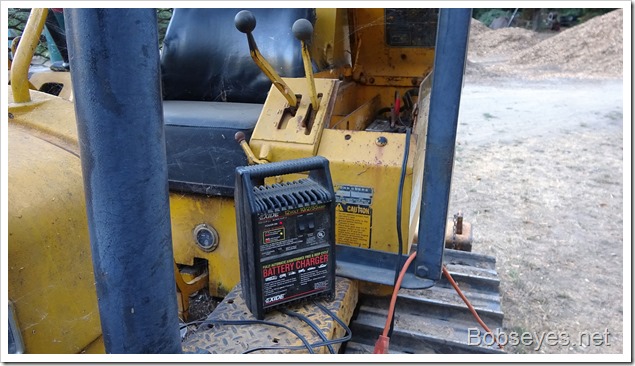 And I looked around the garden a bit. His tomatoes are ripe so I grabbed a couple of them for supper. 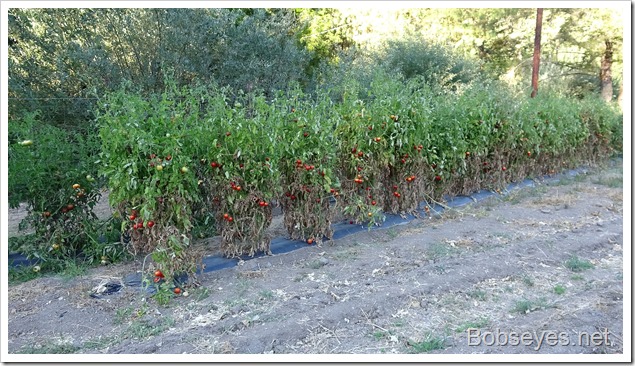 I headed on  home and it was nap time.