Back To Work and Feeding My Chickens Rocks To Save Money

Getting back to my projects

Yesterday I puttered around the yard figuring out what I need to do next to get started working on things again after my trip so I was lazy and didn’t write a blog either, but I had a good day resting up.

Today I did some more planning on things and actually got into a couple projects.

My pallet mulch bins in the chicken’s pen are rather large for the limited space I have in the pen so when I walked by this weed bin I wasn’t using I decided to fix it up and replace the pallet bins with it.

It has a broken leg and needs some leg support so I brought it over to my welding area.

Here it is upside down with the one broken leg ready to be worked on. 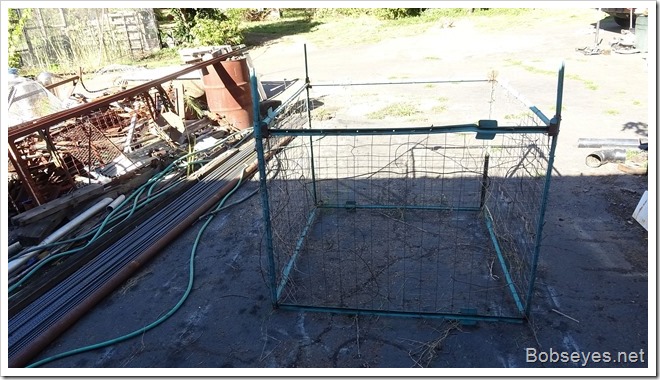 It will go in here to replace the pallets I’m already starting to disassemble. 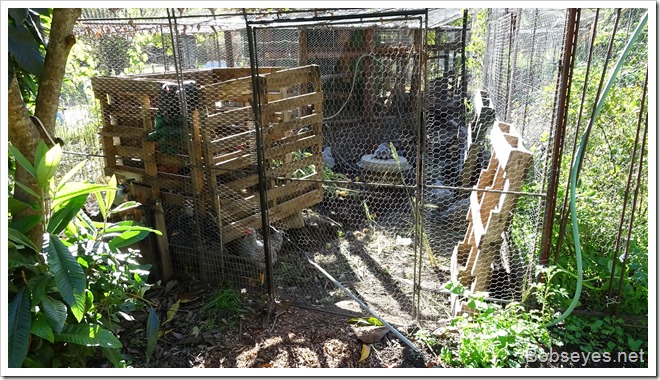 I heard someone holler Bob at my front gate so walked out to see who was calling. It turned out to be Kenny S. stopped by for a visit. We shot the bull for a couple hours which was a good break then he left and I got back too it.

Oh, I mixed all my chickens together two nights ago and they mostly are doing ok together, although the little ones tend to like to rest by themselves behind the pallets, but they are slowly mixing in. Nobody is getting overly beat up so all is well. 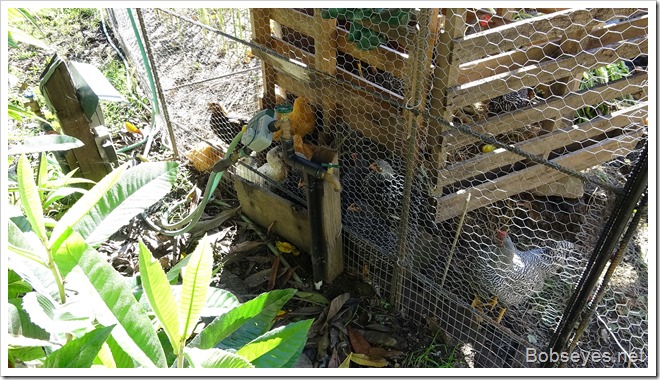 Cutting the gate out

I want to build a six foot wire fence across here from where I’m standing to the property fence with the ivy growing on it behind this gate that is just stored in this spot. I need to go by the pipe pole there so the gate needs to be moved just a little but the ivy is growing into it and it can’t be moved until I trim stuff. 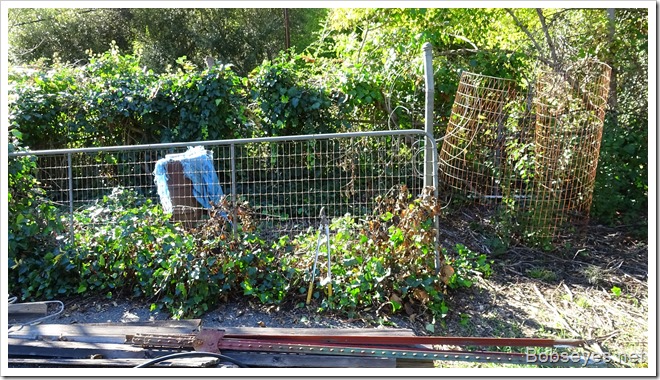 So I trimmed up the ivy and moved the gate a little and left that for now as I need to make another  walk through gate for here. 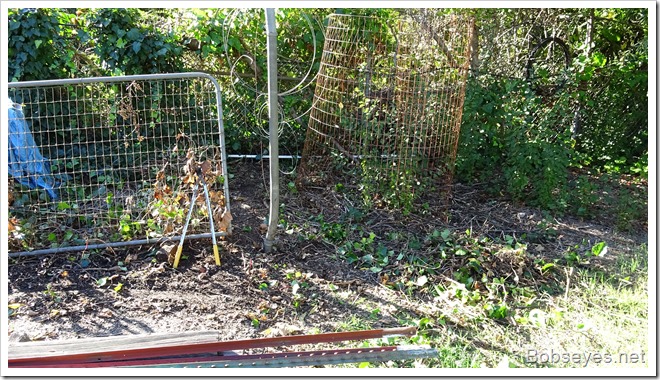 Welding up the new bin

After a break or two I got back to work on the old weed bin and welded the legs and stand up. 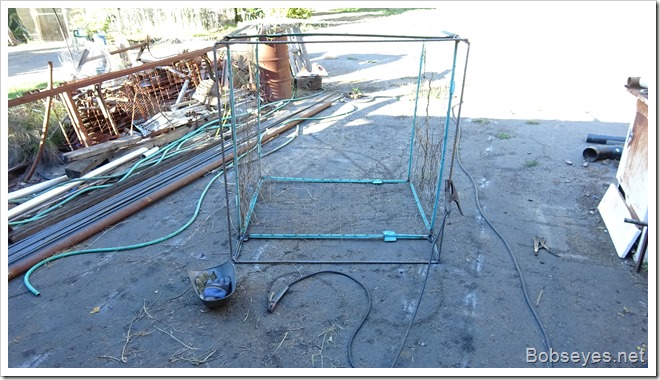 Here is what the finished product looks like right side up. 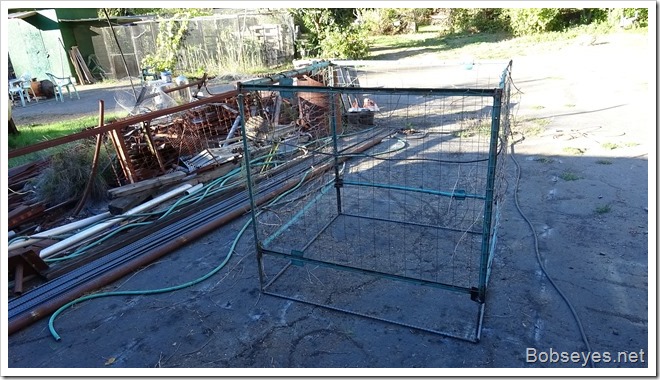 New bins too big to get in there, but

I went back to the chicken mulch pen and disassembled the pallet bins and then realized the new bin’s smallest dimension is four feet and the door is three feet so I have a little problem getting the new bin in when I’m ready. I’m going to let the chicken’s work the mulch area over for a few days before I install the new bin and I will also take a lot more dirt out of the pen under where the mulch bins were. 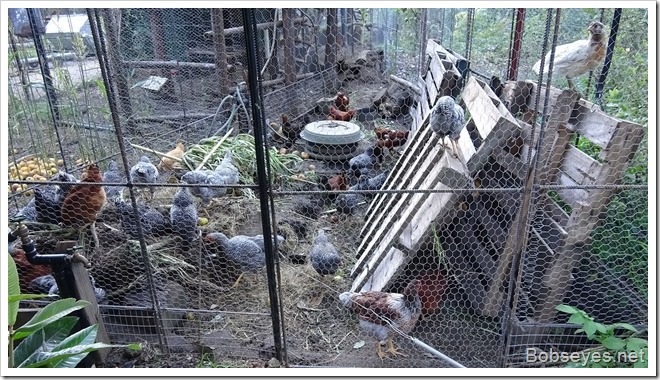 Planning ahead helped a lot

I thought I might cut the new bin in half to get it in but that would be a lot of trouble so thinking more I remembered that I made this rebar panel to be removed it I wanted to get a tractor bucket in there so all I have to do is take a few wires off and dig up it’s buried wire and I’m in with the new bin so that all should work out.

Cost of feed is high so I’m feeding them rocks

A 50 pound bag of seed is about 15 bucks so I decided to feed my chickens rocks instead as I have some of those so the cost is good.

I filled up this cut off bucket with rock and put it in the pen and they started eating it. I bet you thought I was nuts feeding them rocks, eh. 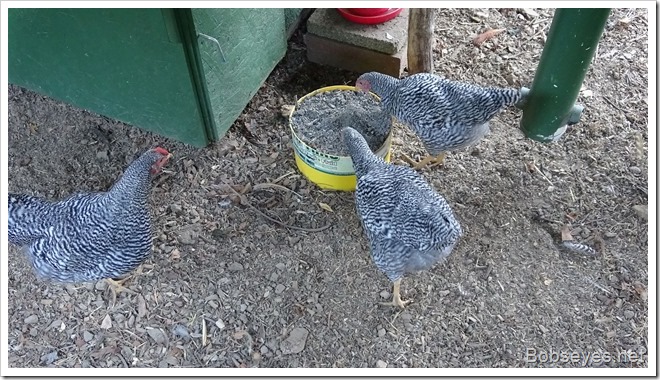 Turns out chickens use small hard rocks in their gizzards to grind up the seed and since I’m feeding my chickens whole seeds instead of milled grain they need more rocks which I’ve read can reduce feed by about 20  percent as they use feed more efficiently when they have plenty of rocks which are also called grit. 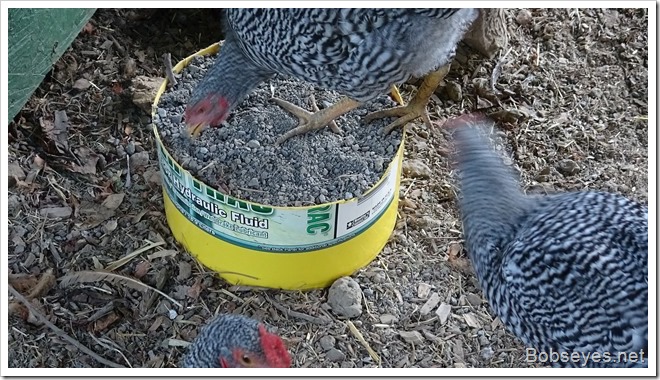 Helping out the mixing process

As it got dark I watched the younger chicks go to the main roost where the big guys were. Some hold back and tried to roost on a small block of wood so at dark I helped them onto the main roost to speed the mixing process up. They won’t move after it’s dark until morning.

That was my day for a nice fall day, sunny and warm.