Back in the Shit, a, I Mean Forest Fire

I got it going today with good hopes but that soon failed.

We have a lot of our equipment parked in  the garden. 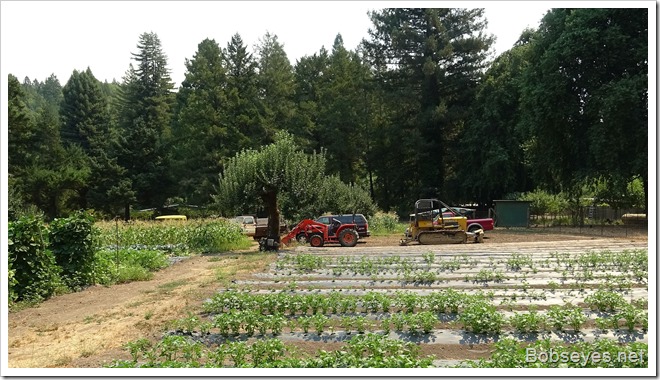 Dirt bike ride to check out the fire

I went for a dirt bike ride up into the hills to see what I might see of the fire.

Here’s the town of Guerneville, a bit smoky but no fire so far but it’s on the way coming towards it on the left side maybe tonight. 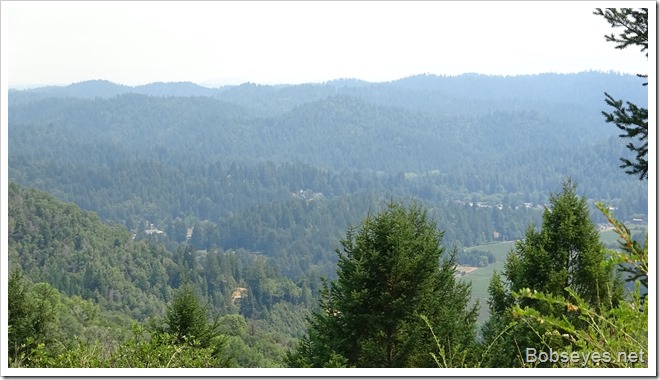 I rode up to the Top of the world to have a look but I couldn’t see any fire from here as it’s in the hills behind those trees so I rode to another spot. 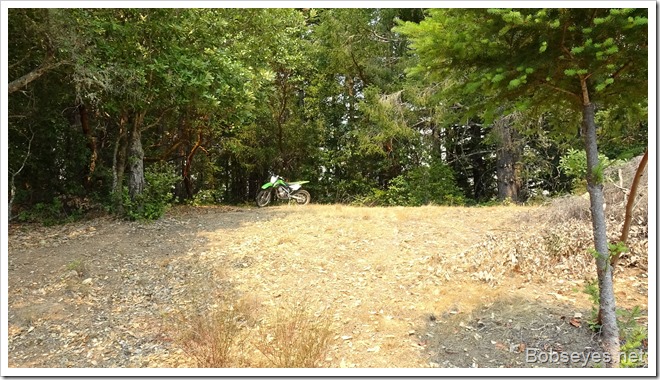 I could see quite a bit of smoke where the fire blew through yesterday. 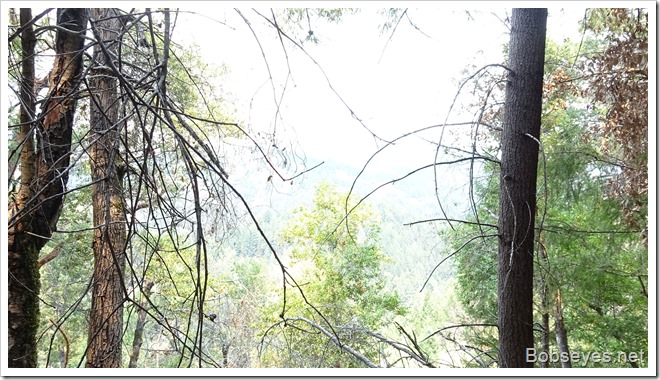 And some hot spots that are slowly burning down the hill from the edge of where the fire burned though yesterday. This is above the Armstrong State Park. 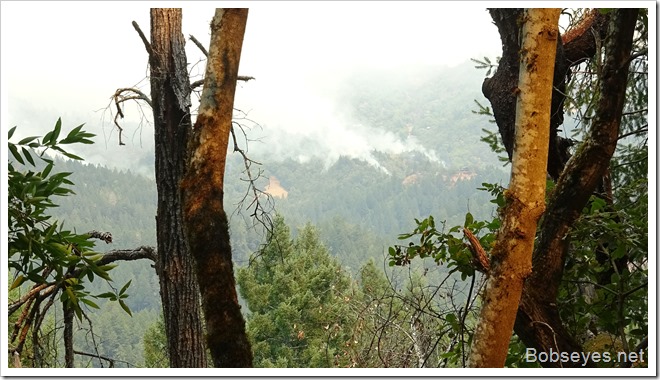 I decided I needed a  better view so I started to ride towards a neighbor’s place where I thought I might get some views of the fire when I ran into these two guys. They were clearing the old road to make a fire break as the fire might be coming soon. 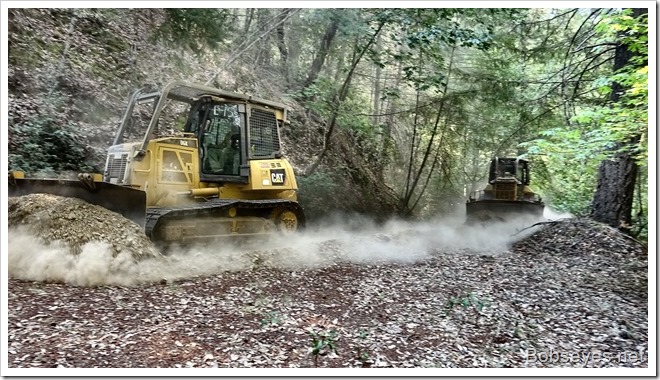 Helped out a bit

Since they just sorta knew where they were going I hung with them to make sure they went to the spot they were supposed to go which was above Watson Road.

They moved pretty fast making a lot of dust. I hung back to stay out of their way. 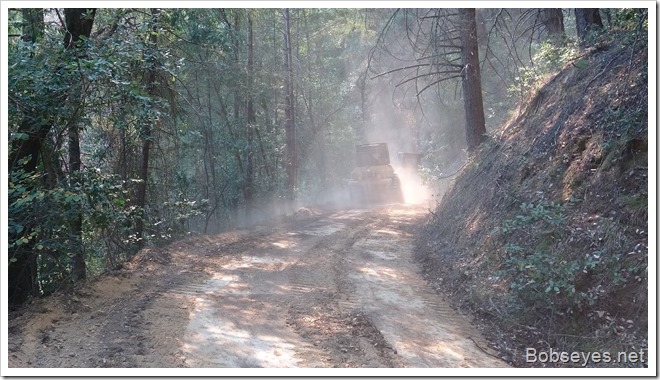 I was hoping they’d push that big stump out of the road, but they just went around it. 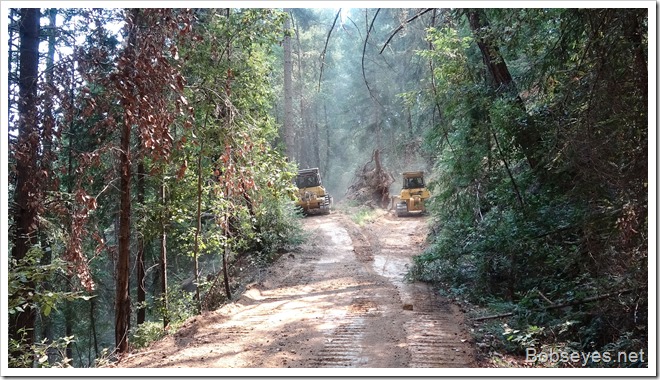 We continued on and had about two miles to go. 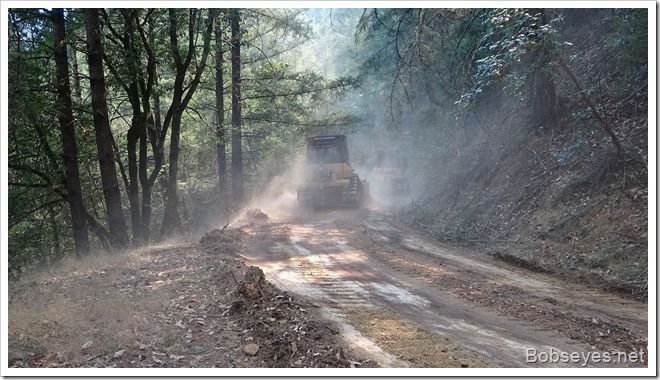 We had a little pow-wow here and then they took off again once they had the right direction. 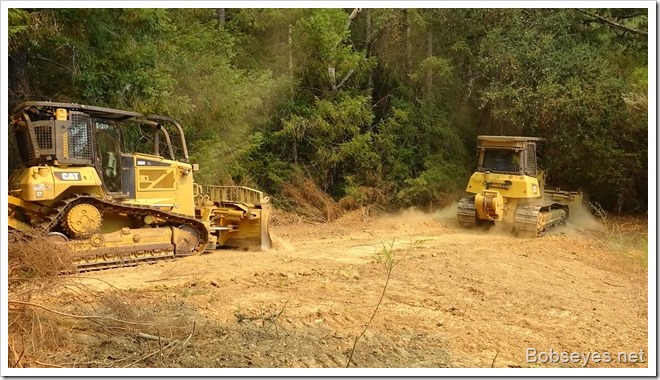 When they got to the end of the road, the road down to the paved road was washed out bad so a neighbor that owned the property came up and said she unlocked her gate and the road was good for them to go down so they decided they would go that way down to Armstrong Woods Road instead. 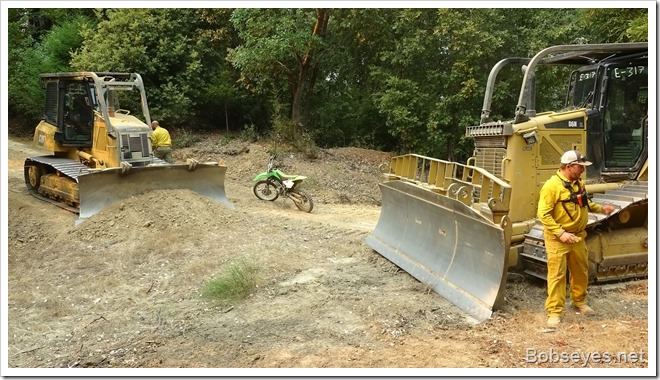 Just as I was about to leave the command truck came up the road. 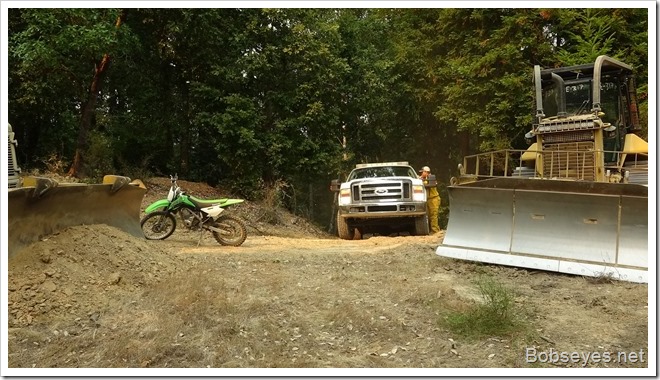 Since I’d done what I could I decided to follow back where the two dozers had come from as they said it was a hot spot. They called the spot Devils slide which we call Bald Mountain.

I made it to the place where they had started but I got lost on the roads for a bit as I  hadn’t been on this ranch for about 50 years.

After going around in a couple circles and realized where things were I rode up to the top of  Bald Mountain to have a look as it’s one of the higher mountains here.

The dozers had cut a fire break down from Bald Mountain here. 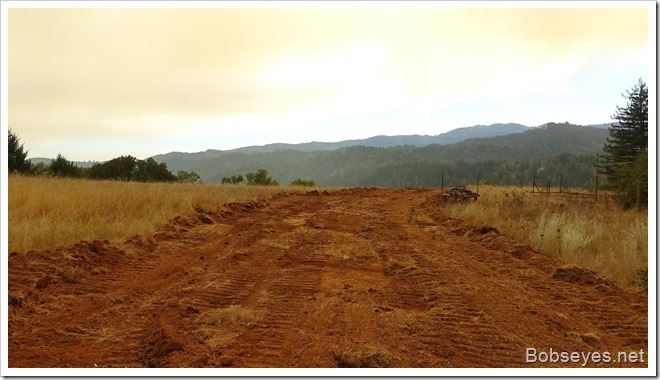 Hot spot, no going that way

I was looking for the fire hot spot the dozer operators had told me about so I rode down the main road into the Lutrell ranch until I came to the fire and could go no further. There were no fire guys in this area and I suddenly got concerned as I might be in an area of a fire drop from a plane which wouldn’t be good for me. 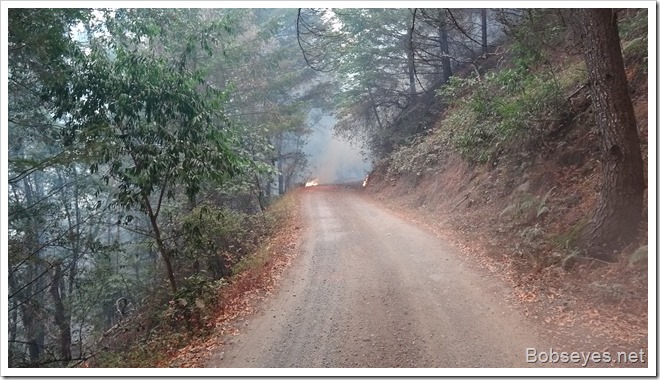 Looking up the hill I could see the fire slowly crawling up the back of Bald Mountain. 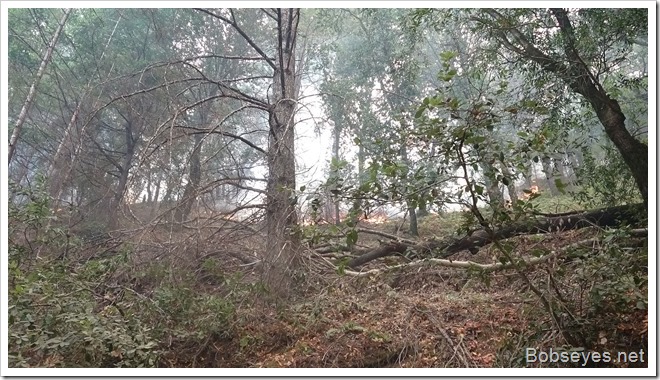 Just because I could (Georges saying for those in the know)

I got the hell out of there and on the way decided to ride the bike down through the state park, mostly just because I could. 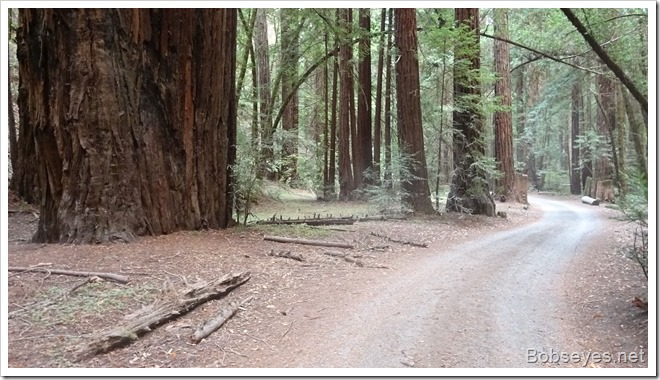 I ran into a herd of goats on the way which I heard later were from our neighbors by my house. They should be ok but might get a long way from home before this is over.

I pulled into my yard and shortly  my brother Tom came by and said he’s leaving as the fire is headed around us and is supposed to come into the area of Rio Nido tonight, not far from here or the town of Guerneville.  Lots of fire trucks are headed to that area to get ready to protect the area.

My brother Barry gave me an ap for the CAL fire radio traffic so now I have a bit more info to decide what I might want to do. Mount Jackson is just above Rio Nido where the fire is supposed to drop in from tonight where they are working heavily right now with air tanker drops.

Here’s the web page address if you are interested. It’s very active in the daylight hours but not so much at night.

So far I plan to stay as I have a fairly safe road to get out on if things get dangerous. The van is packed and ready to go.

So even with this dreadful fire I’m making the best of it and enjoying what I can so the day was mostly a nice day. :O)

We’ll see what the night brings. The fire guys are working hard at it and now have air support which is very helpful.

I thought I should go outside and see how things looked. It’s real quiet with crickets, very peaceful right now. I can see some stars and it looks like the fog is moving in from the ocean to the west. Very still no wind very good for fire suppression. As far as I  know the fire’s slowed a bit and hasn’t moved into the Rio Nido or Guerneville area.

I was just outside and all is about the same as my last update, the night is nice and calm. Fire fighters will be on the line working away to suppress the fire at dawn to get as much done before any winds might come up. Lots of them are on line now mostly watching things until morning and maybe trying to get a break after a hard days work before another hard days work begins.

There’s been a false report in news about the old growth redwoods burning in Armstrong State park which is totally wrong as I rode my dirt bike through it just before dark coming down the hill and no fires are in  the park reserve proper. There are some fires above it, one in the Pond Farm area and one moving over near the park on the old Lutrell Ranch but so far as I know the park is so far spared.

Big redwood trees can handle it

And even if some fire gets into those big old 2000 year old trees, most of them will be spared. They’ve been through fires before.

I’m off to bed and we’ll see about tomorrow’s adventures tomorrow.

I still think I’m fairly safe here, but lots of other places in other areas aren’t.

9 Responses to Back in the Shit, a, I Mean Forest Fire