More rain but not so bad

More rain was expected today and it was showers as I got it going this morning.

Since I had received the new automatic gate antenna the other day I wanted to get it installed to see if it fixes the problem or not.

When the rain slacked up a bit I went out to the control box and installed the new antenna which was fairly easy.

I pressed the wireless control and the gate opened. Success. I like it when things work out.

Here’s the gates control box where I was working. The rain picked back up a bit but I got er done. 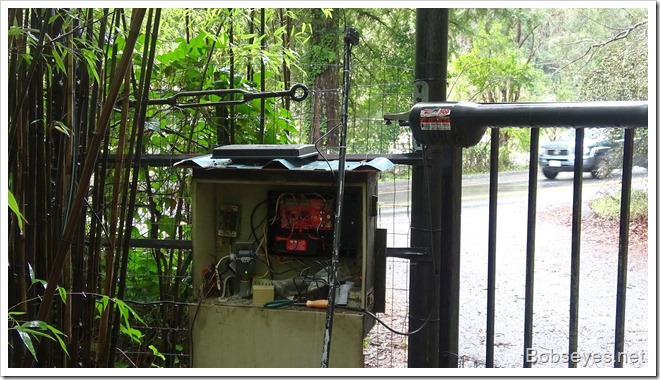 The neighbors cat wanted in the house so I let her in and made myself a cup of coffee. The cat are some out of it’s dish and then went in the bedroom for a snooze. Can’t blame her cool and damp outside.

With the rain I couldn’t do much outside but I could build a new battery bracket for the Toyota as most of that could be done inside, except for the welding part which I hoped to do between showers.

Measurements were needed to cut the parts to build the bracket.

Here’s the stuff to do the job and get the measurements. 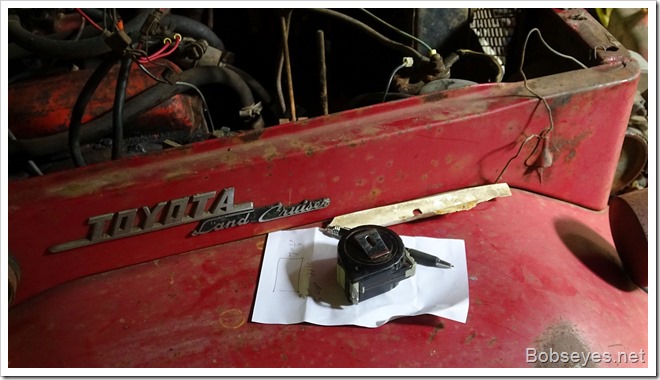 Acid corrodes over the years

Here’s the corroded battery bracket I’ll need to remove eventually, but for now I just needed the measurements of the old bracket. There’s four bolts holding the old bracket in that I’ll have to remove somehow as they are all corroded too. 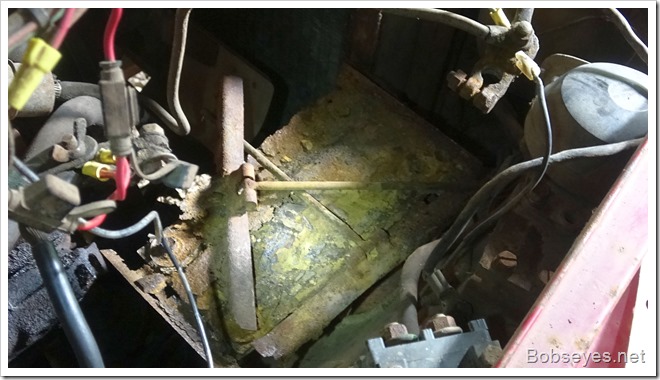 I cut the parts out of steel I have on hand and then went in for another cup of coffee as it was raining again and I didn’t want to weld in the rain.

Working between the rain showers

While I was sitting in the house drinking my coffee I noticed the sun had come out. Thinking it might not last I left my coffee and went out and set things up for welding up the bracket.

Here’s the metal parts tacked together to form the battery bracket that the battery sits on. 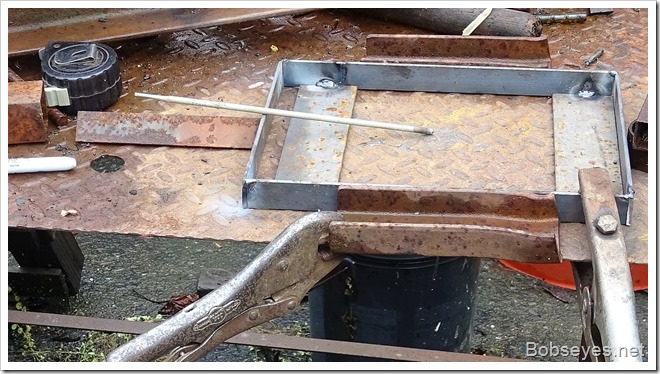 I measured and drilled holes in the welded up bracket. Looking at those holes now I can see I screwed up on one of them and will have to drill another hole to remedy that. The top right hole is in the wrong spot. It should be lined up with the top left hole and the bottom right hole. Easy to fix now. 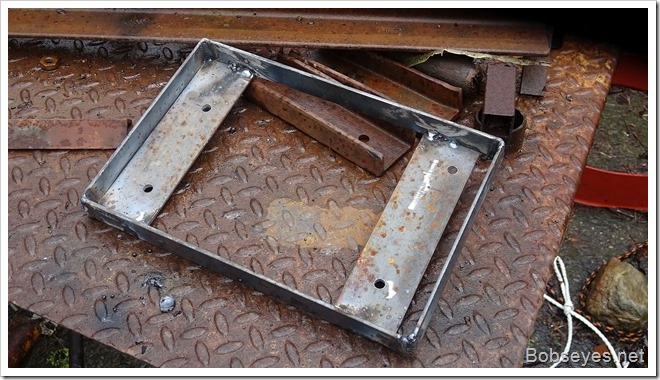 I needed to weld the old battery hold downs to the new bracket. I was able to salvage them and they were good enough to use.

Here’s the two old hold downs before I welded them in place. 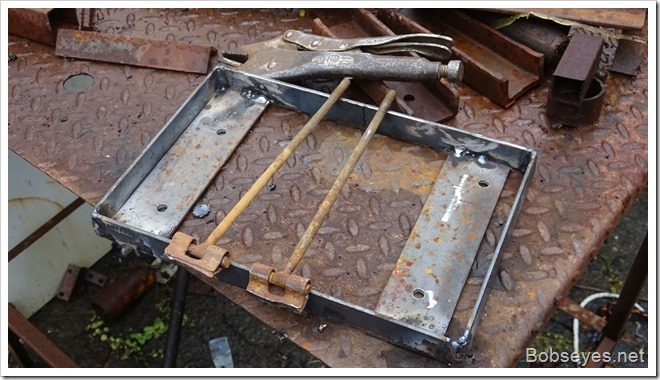 New bracket welded up and ready for paint

Here’s the finished battery bracket ready to paint which I did in black. I will still need to drill that other hole in the right spot but otherwise I think it will be ready to go when the paint dries. 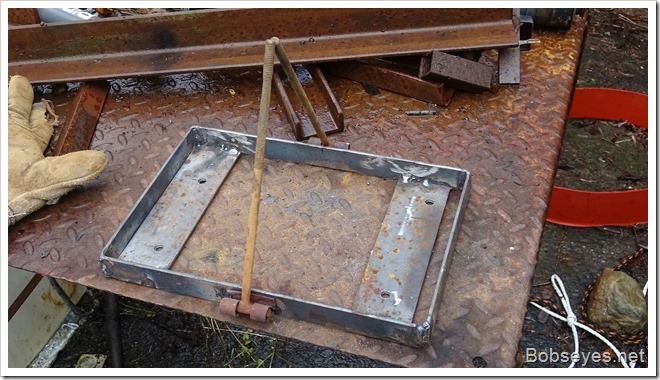 I put some black paint on the bracket, three coats and it’s drying.

I let the chickens out and gave them a treat. 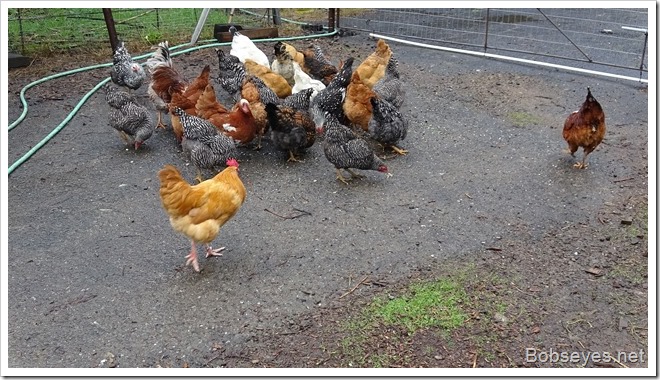 Back in the house I finally finished my cup of coffee after warming it up again.

While drinking that coffee I was thinking I might as well get the hand grinder out and see about grinding the 4 bolts off the old corroded battery bracket so I can remove it from the rig.

The disc grinder made this part of the job fairly easy with lots of sparks. 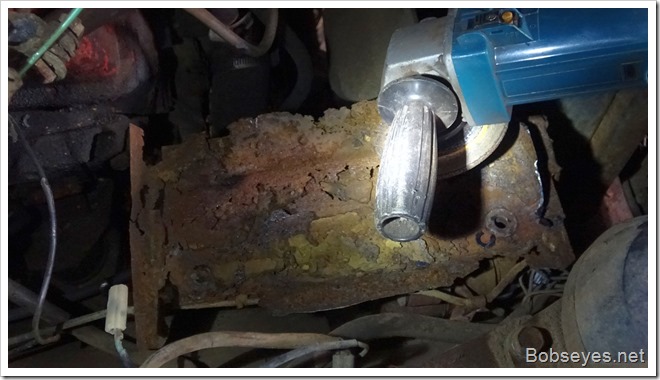 Here’s what’s left of the old battery bracket I ground the 4 bolts off of. Not much left eh. 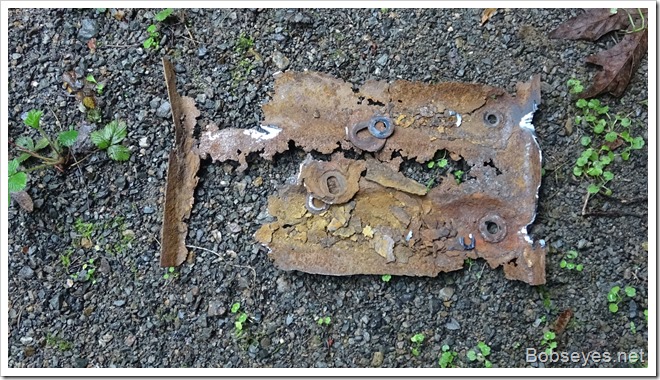 Expecting more rain on the way

With the expected rain I didn’t expect to get these things done today but good to get them done so I can move on to more stuff. :O)

It looks like we are going to get some more rain on and off for the next week or more so I’ll just have to work between the rain drops.

That was my day. Not bad.