Last night I did some research to learn how to get the drone connected to the controller as I was having problems getting that to work.

Just about the time I was ready to head for bed I was at the drone’s support page and it said before getting in touch with them view the help tutorials first, so I had a quick look and it looked like what I needed  to get going, but I was off to bed.

So today, I was thinking of going yakking but instead started working on getting the drone going instead.

That was the ticket, I got things to work, so, guess what.

It seemed like a good day to see if I could fly the thing without crashing it.

The only problem I had now was the brightness of the sun washing out my viewing screen so I sat in the shade and set things up for the test. 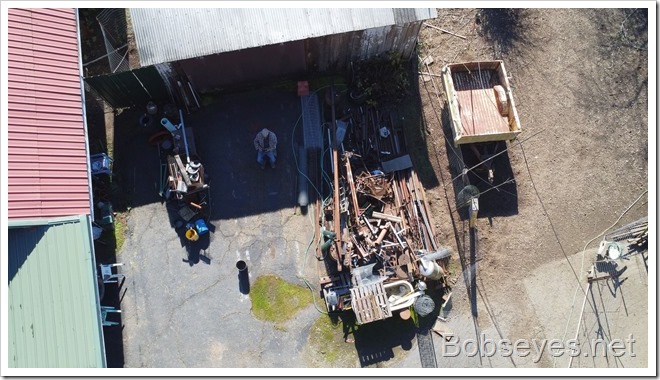 Off the drone went, up into the air. I watched the drone and the screen as it flew up to a redwood tree top. I tried the picture button for this. 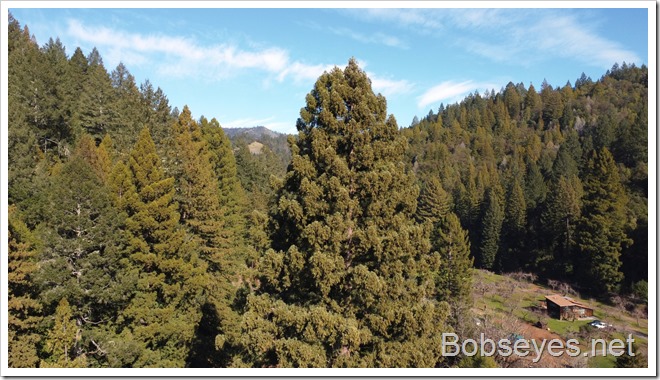 My brother Tom was doing some tree trimming in my yard so I ran the thing over by him to see if I could maneuver and get a picture. Not too hard, the thing is very stable and flies pretty easily. I think most people could fly this thing once it gets set up. 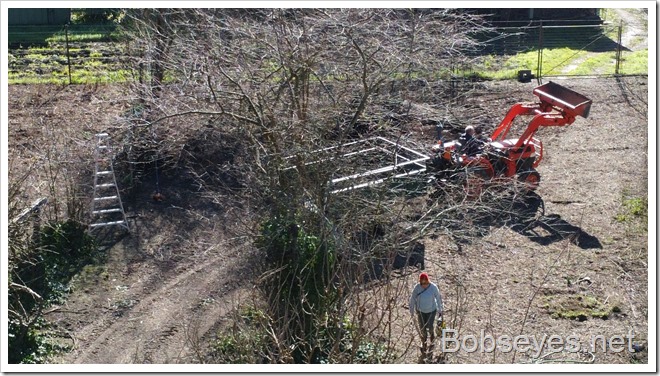 I fly up into the air and got this picture of my place, it’s about an acre. 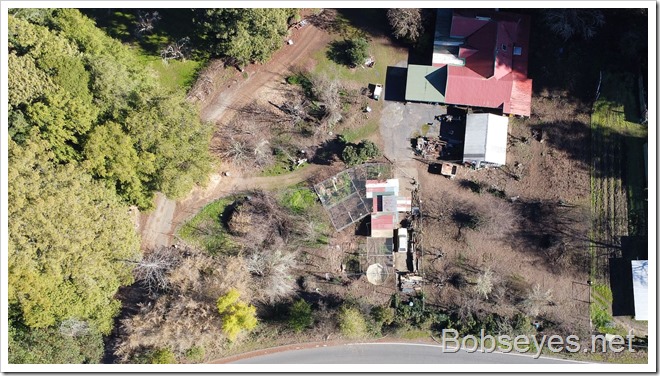 I practiced moving the drone around just in front of me to get used to using it and ran the first battery dry and did the same thing with another battery.

That all went pretty well. I put the batteries back on the charger and got something to eat.

Well, as long as I was trying out the drone, I thought I  might as well go to the top of the hill and see what I could do with it, hopefully not loosing it.

So I got the fly stuff together in it’s carrying bag and headed on up to the Guerneville overlook, here and set up. 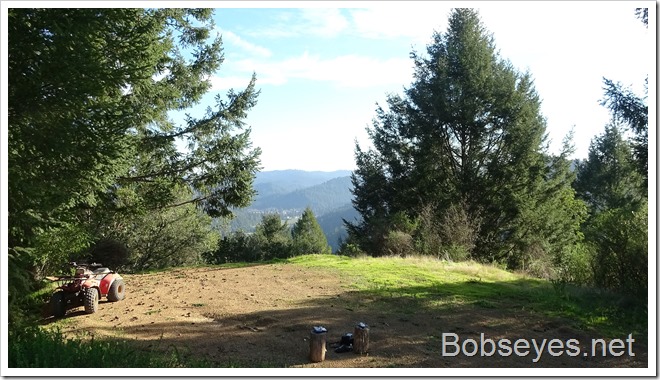 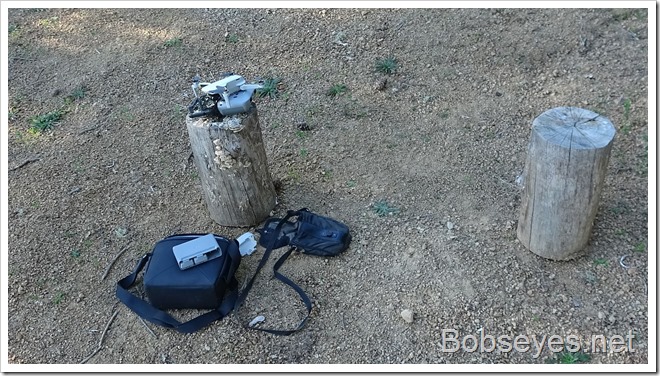 This is the drone gear, a drone, a controller and my cell phone to view the pictures of it’s camera and to operate the drone. 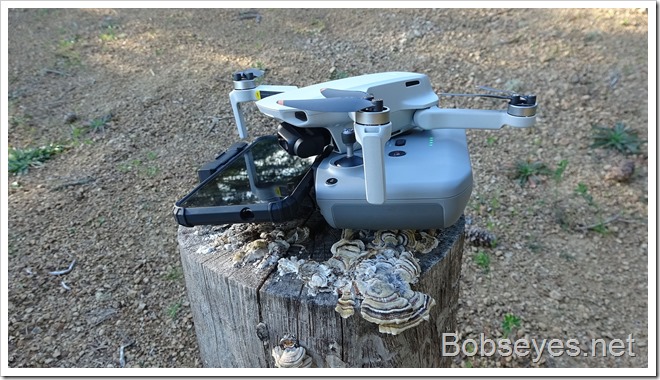 I launched the drone taking care not to crash into any big trees. 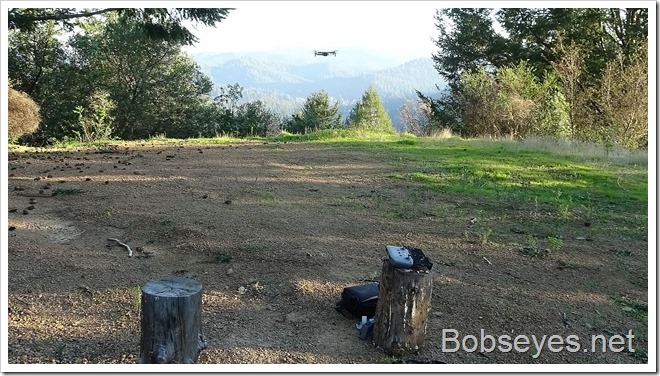 Here I am flying the drone up and away. 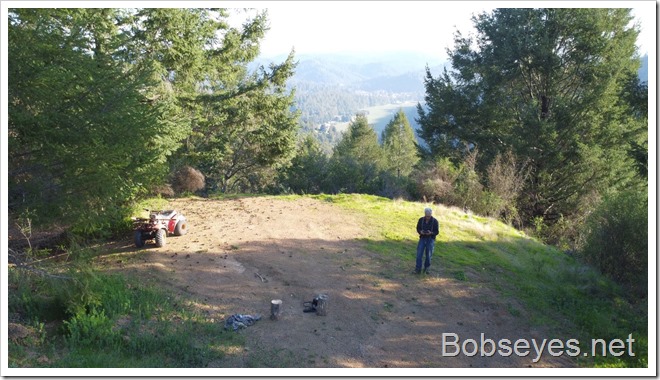 I took it up and got this shot of the Guerneville area. I didn’t want to go to close to Guerneville at this time as I need to learn how to pilot this thing more. 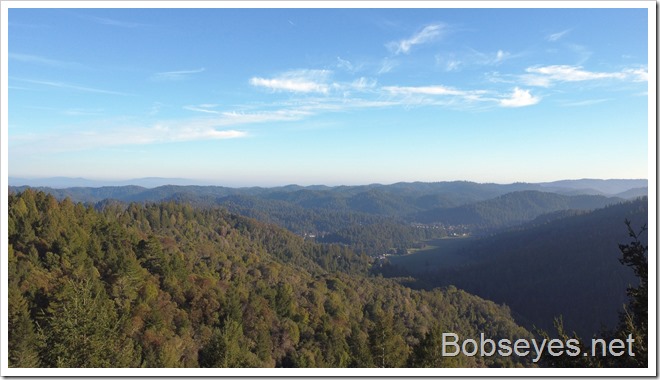 I was on the first battery when I thought I’d try flying up high and that was almost a disaster as I lost the drone up there someplace.

Where did it go

I was going up high and watching it when I looked away and backup and couldn’t see it, but I could hear it a little.

I wasn’t sure where it was and figured I’d run out of battery and it would go down in the trees somewhere and that would be it for it.

My biggest problem is I didn’t know how to run this thing much and I panicked.

I should have been checking the altitude and the picture the camera was sending but I was just looking and listening for the drone in the air.

I tried moving the joy stick this way and that, going up more than down just in case and I could hear it better sometimes but still couldn’t spot it so I could land it.

I hit the land button and it said it would land just below where ever it was, not good as I didn’t know where it was, so I aborted that.

I knew there was a Return to the takeoff spot but I didn’t know how to start that.

Finally the low battery warning sounded and it said it was going to Return to the takeoff spot. I wasn’t trusting that with the big trees around but I didn’t have much choice so I watched for it, stopping a couple of times to see if the sound was getting closer and it was.

It finally came into sight and it was off the landing zone a bit so I guided it to the landing area and stopped it about six feet in the air and went over and grabbed it out of the air. You grab it from the bottom and quickly turn it sideways and it shuts down which is safer than landing on the ground where it might hit some debris.

That was close, I thought I’d lost it.

However once I thought about it and what I did wrong I knew what I needed to learn so this doesn’t happen again. I did learn that north on the viewer was off so I couldn’t see which way it was from me. I learned that I need to do a compass calibration first so that is right as having not done this it was throwing me off and confusing me.

Nothing like a big mistake to get one to learn and fortunately the Return to base worked well.

So,  I took and break and then put another battery in the drone and took off again to practice maneuvering around just in front of me, until that battery said it was done about a half hour flight time.

Here I am doing maneuvers on the second battery to practice running the drone. 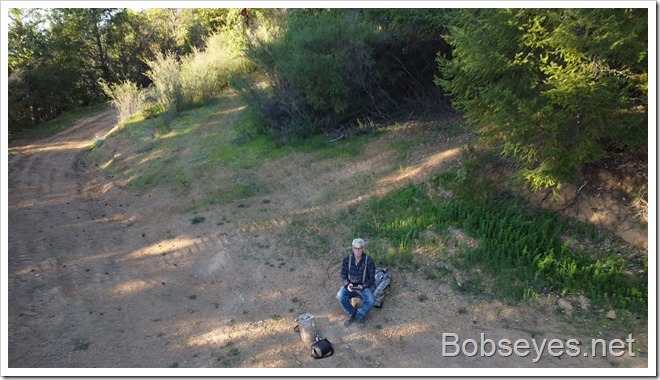 I went straight up for this picture to show you where I was in the big trees. It’s not just that the drone might run into one of them, but they also block my view of where the drone is. 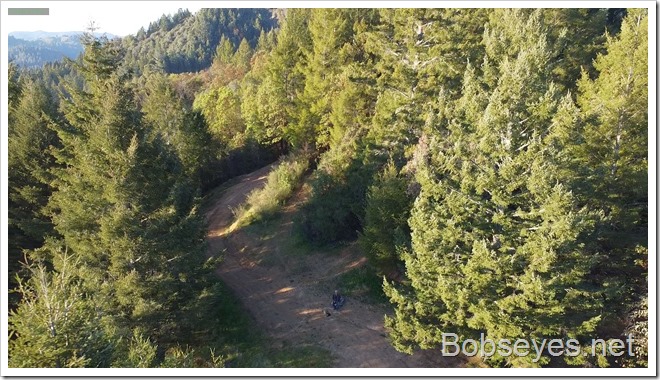 All turns out well

The drone actually flew very well and was fairly easy to keep from hitting the big trees. It’s very stable to fly, if I let off the control sticks it just stops and hovers.

After the second battery I was thinking of using the third one but it was close to dark so I headed on down the hill to  my house.

1 Response to Auk, Where’s My Drone, Almost Lost It