Armstrong Redwood Reserve, The Armstrong Ranch and Our Family Property

This is a special post, two posts published today this and the one under it.

A reader of my blog asked about the history of our family property so I thought I’d see what I could do to fill her in.

Armstrong was a logger and he bought the upper part of what is now Armstrong Valley but at the time was called Big Bottom for the huge size of the redwood trees that grow in this valley where I live near the little town of Guerneville.

The loggers moved into this area sometime after 1850 when the area was pristine and some Indian tribes where the only people living in the area until this time. The first town in the area was Mercuryville at the big mercury mine that was here also at that time just a couple miles up the road from my place and Armstrong’s Ranch. My great grand father and his mother where recorded at that mine in the early 1860’s. He was five and his  mother ran a a boarding house, but no mention of his Dad.

Most people where immigrants at that time and  didn’t have much money but knew how to live off the land.

So anyway San Francisco was booming because of the gold rush and they needed building materials to build it and again after the 1906 earthquake which destroyed most of the city.

So they started logging all the big trees around the Guerneville area as they were the hugest trees around, likely some of the largest trees in the world that have amazing building qualities, such as the stuff does not rot easily and is easy to work with.

So Armstrong being a logger bought up most of the best part of the upper valley and built his ranch there as he logged all the trees out.

The Armstrong valley and the town of Guerneville had some of the largest trees in the world growing here. This is a sample of just how big those trees were. 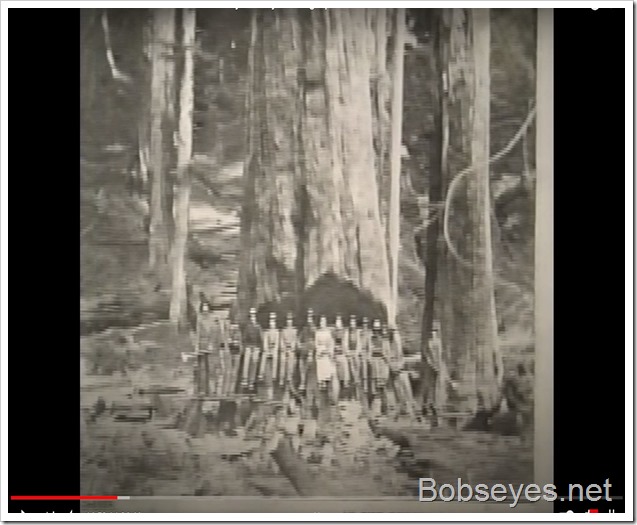 Armstrong had health problems just before about 1900 and his ranch got sold off to several different people.

All the forest was clear cut

This picture is of a small town, Monte Rio, down river of Guerneville and what it shows is just how clear cut they cut down all the forest in this area. Guerneville and the Armstrong valley and hills looked just like this around 1900. 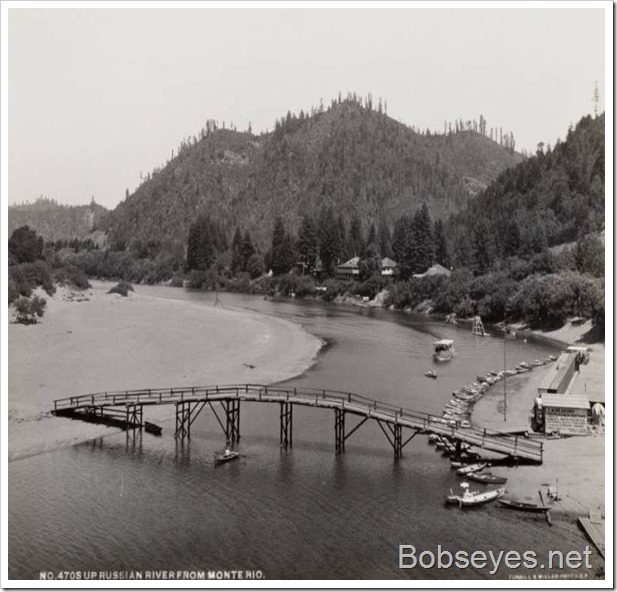 It should be noted that all this forest has grown back to a full forest in less than an hundred years and is doing very nicely now.

As it turns out there was one piece of land they did not log for an interesting reason.

The plot which is now Armstrong Woods Park Reserve was mostly not logged. The reason was because the trees in that plot had a lot of rot in them. In those days they only used the best part of the tree, called clear heart redwood and the rot made those trees unusable and it wasn’t worth taking a week or so to cut one down to find it wouldn’t meet the clear heart wood standard so that plot was left, fortunately for those trees as if they didn’t have some rot they would have been logged and cut down like all the rest. There were no chain saws in those days. Everything was done by hand and animals. Armstrong and his daughter tried to sell the land of those redwoods for a park, but they had a hard time of it until a number of years later.

My Great Grandpa the Teamster

Enter my great grandpa, Henry Ayers who was a Teamster in those days which meant he used animals and wagons to haul stuff for people to make a living as there were no tractors or trucks at that time. When someone had some work to do he’d bring his horses or mules or oxen and wagon or whatever was needed to do the job.

There was a new mine back in the hills over very steep dangerous roads and my great grandfather had a hauling contract with them to haul stuff in and haul the ore out. Magnesite is what they were mining and much in demand as at the time there were very few sources of it.

Armstrong’s ranch was at the bottom of those hills and for sale so Henry Ayers bought all his animal caring and orchard property and some of the steep redwood hills too, the best part of the Armstrong property. The other parts were the main house and the redwoods that eventfully became the park. My grandfather got the working part of the ranch which I didn’t realize until about ten years ago.

My brother Barry found out from an old ledger that Luther Burbank an historic person once owned our family property and the land where the state park is before it was a state park.

This below picture tells a lot. I’m not sure but one of the guys on the first wagon may be my Great Grandfather and these are his wagons hauling sacks of magnesite ore from the Red Slide Mine. There seems to be a parade going on, likely called the Stumptown Parade as that was what the town of Guerneville was first called as there were huge redwood stumps everywhere which eventually got blasted out and removed through the years.

The sign on the wall, Birkhofer was a grandfather on the other side of the family that married Henry Ayer’s daughter, Laura and ran a grocery store until he died when I was about five. If he’d lived I’d likely be a grocer. Downtown Stumptown or Guerneville. 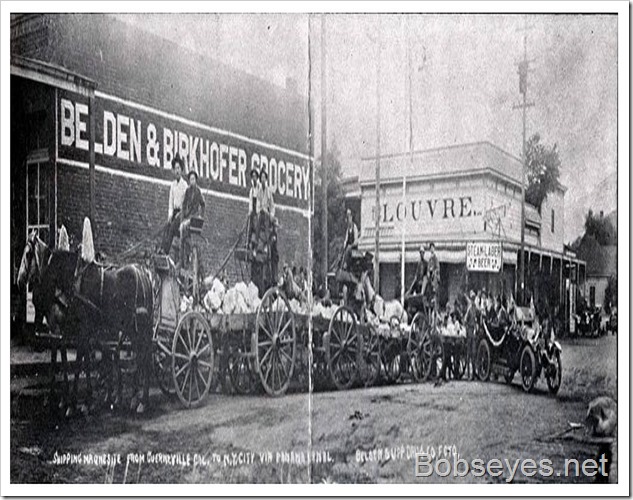 So anyway I grew up in my Great Grandfathers old house, remodeled a bit of course, a good place for a  kid to grow up and we spent quite a bit of time playing in the not so popular yet park and on our family property which was mostly orchards and forest land.

Most of that land has been in the family since that time with parcels split off, one for each of Grandma Laura’s kids of which there were four to build their family houses and we all shared the family property.

After my Vietnam military experience and college and work at HP, I was fortunate to be able to move back into our family house and have been here ever since, a great place to live, one of the best places in the world.

So let’s bring things up to the present. At first Laura’s four kids owned all the family property but they all have passed on and left the property to their kids, there’s now nine of us with only a few of us living in the area using the property and most of us are getting older which brings us to the present.

We have a problem

The family knows we have a problem coming up and that is if one of us dies and gives their share to one of their kids that aren’t interested in the property we’d have to buy them out to keep the property or  sell it to be able to pay them off and we’d lose the property. Land here is just worth too much money these days so it’s not so easy to just buy someone out.

Good solution for all

For a number of years I’ve been thinking it would be a good idea to move our family property into the state park’s system. One of my Aunts stated to me she’d like it to go into the state park system just before she died and left her share to me and my brothers.

I’ve been looking for a way to do this and recently a way presented itself after I got to know most of the people in the park during the big forest fire around here and in the park last summer.

The state park has a serious parking problem and has a hard time making money to support it because the park has a reserve designation so they can’t do much to change anything in it, but our family property is another flat valley adjoining the park that has a bunch of parking and places and picnic, camp and RV parking spots and lots of fire roads that would  make excellent hiking trails up in the hills.

A family decision to make

So recently I let my follow owners know we had a decision to make to see about getting the family property into the state park system and what do they think about it?

Everyone  else I talked with said it would be impossible to get 9 people to agree on something like this as each and every one has to agree or no go, all or nothing.

Amazingly enough, all nine agreed to see if we can make it happen.

It only takes two things to make this deal that would benefit all the people that will use the park in the future. A fair market value and letting us that still use the property use it like we’ve always used it until we pass on or are too old to use the property any more.

So the job now is to get the State parks system interested and get the land trust people interested in buying the property for the state park system. It works like this. The state has a quarter cent sales tax to buy lands that the public can use and in this case the land trust buy the land and give it to the state.

The time is right now for this to happen. It’s a good deal for all of us and all of the public too.

I decided to make this public as public support in doing something like this is always very helpful. A win, win, for everyone. I hope we can get this thing moving in the right direction as missing this chance to get this land into the park system would be a loss to the public. It’s time to do it or it may never happen.

That’s the story and our family has been very fortunate to have had this land to grow up on and use and  enjoy.

And that is the rest of the story.

(Visited 468 times, 1 visits today)
This entry was posted in Uncategorized and tagged Armstrong Redwood Reserve, The Armstrong Estate and Our Family Property. Bookmark the permalink.

8 Responses to Armstrong Redwood Reserve, The Armstrong Ranch and Our Family Property