Another Fine Day Paddling Jenner, But Too Cold to Work at Home

That’s pretty much what the day turned out to be.

I arrived just before noon. The guys were still working on the roads at Jenner.

I put the boat in the water at the boat ramp and headed down river towards the mouth, looking like this. 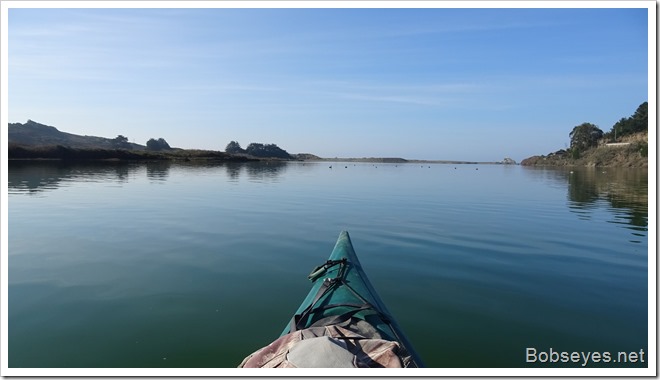 I went by my buddies the grebe. They seem to be getting use to me and are not taking off. They usually dive under the water and come up quite a ways away, but they didn’t to that today. 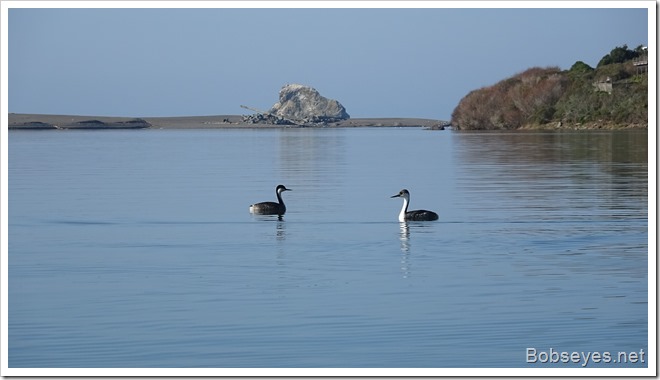 And I paddled by here looking for John. I could see him in his house, but he was busy and didn’t come out to shoot the bull. 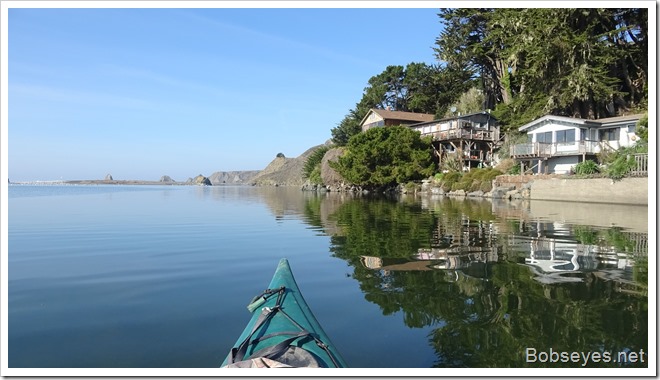 I headed over to check out the river’s mouth area. I could see lots of birds over there. 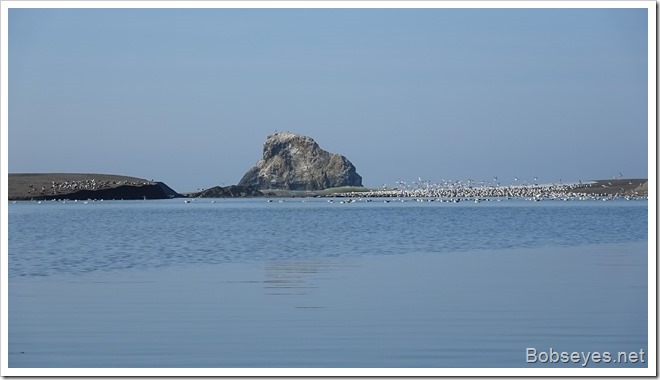 I paddled right into where the mouth should be, moving  slowly giving the birds a chance to move around me. They move giving me space. The ocean is fairly rough and could be heard and seen pounding the shoreline. 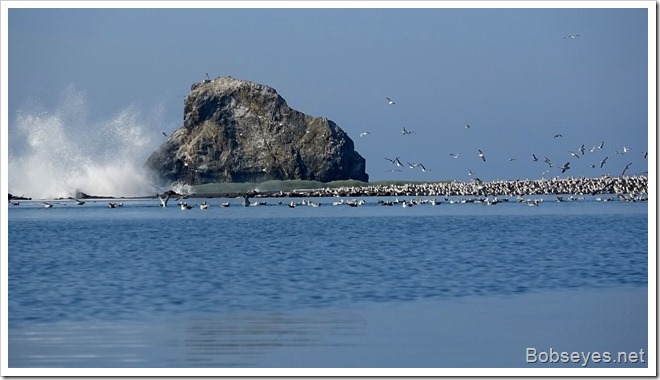 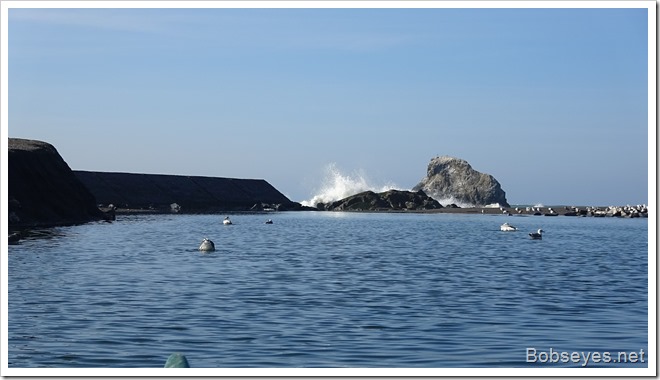 I got fairly close to the seals, some of them were keeping their eyes on me so I didn’t get any closer. 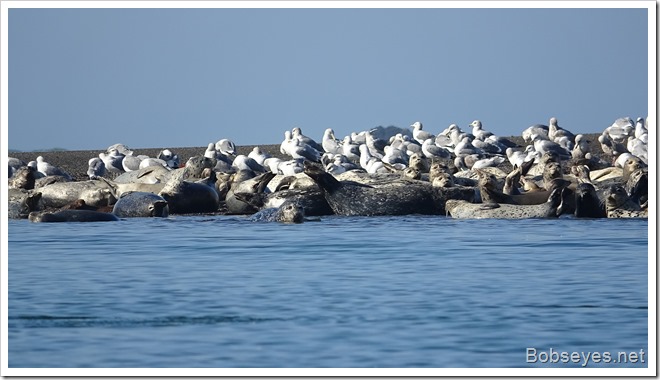 The river’s mouth is going out in these jetty rocks and is still open. 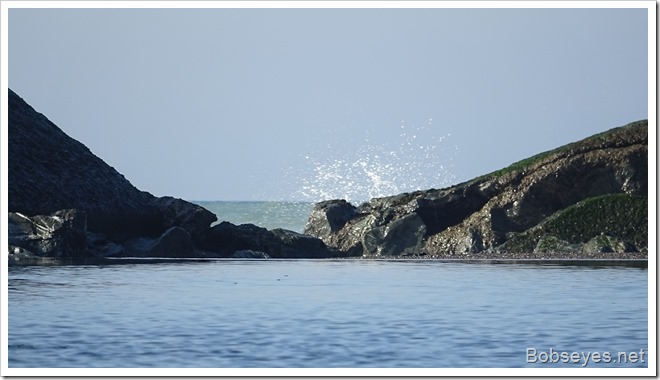 I was in pretty close to the harbor seals, but not close enough to spook them. Lots of seagulls too. 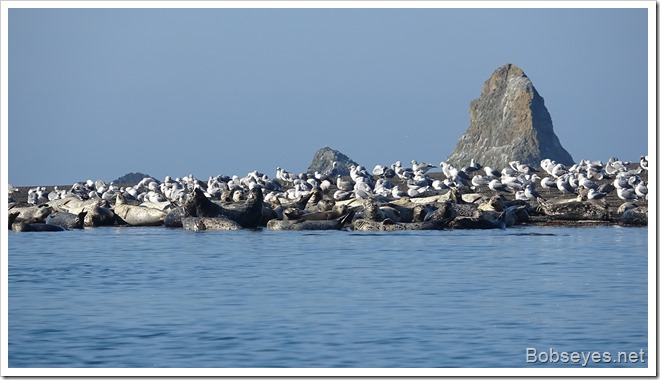 Headed back to Penny Island

I hung around the mouth for awhile then turned and started back headed for the Penny Island back channel.

I spotted several deer on the island about six, more than are usually there. They just swim back and forth through the water to get on and off the island. 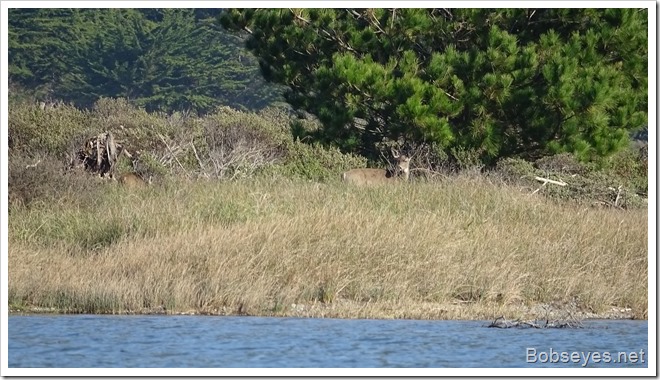 I took my time and worked my way up the back channel and pulled into this spot on the upper end of the island where I sat and took it easy for a bit watching things. The road guys are over there working on the new guard rails. 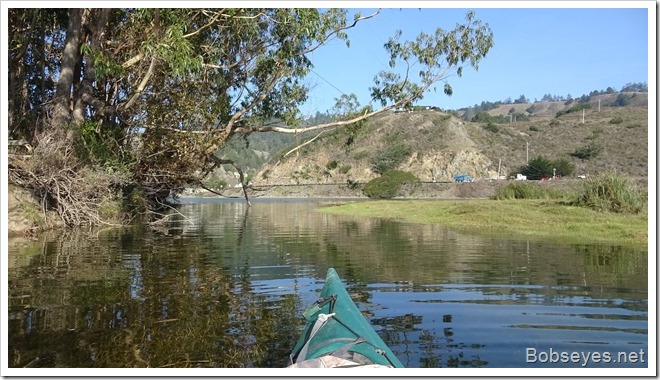 I pulled up along this grass and sat and watched. 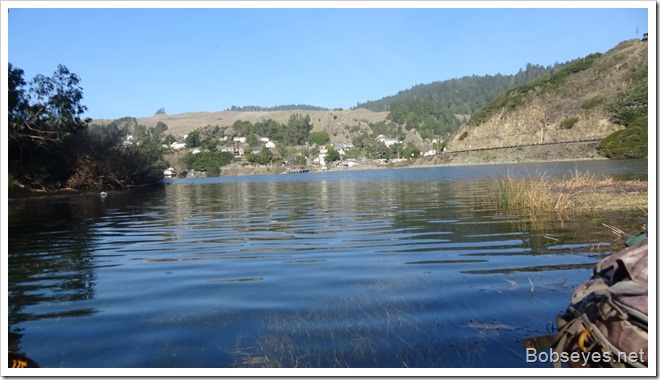 These buffle head ducks were feeding right in front of me. With their white heads it’s real difficult to get a good photo of them as all the white seems to wipe out a good picture as it makes the camera not focus well. 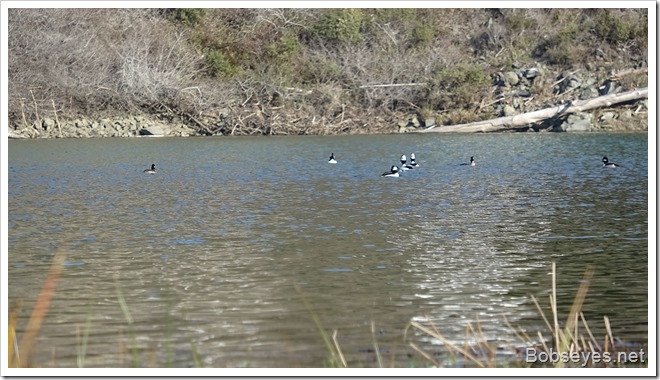 I sat in the channel and finally decided I had a good paddle and that was enough for the day so I headed in to the boat ramp.

At the boat ramp there were two people putting their kayaks in the water so I shot the bull with them. They were two RVers from Maryland, a place I was stationed for awhile when I was in the army back in 1966, at Aberdeen Proving Grounds which was close to where they now lived, but they were liking it in California as it’s real cold back there right now.

I wished then a good paddle and left for home stopping at the grocery store for some eats then continued home.

Not warm enough to get any work done

I was going to work on my van crane, but even though the sun was still out, the cold  went right through me rather quickly and I retreated to the house where I turned up the heat.

I need to get that lift crane made so I can go find me a motorcycle and bring it home. I’m thinking a smaller one to haul around on the back of my van so I can explore the rougher roads in the desert. Most of the smaller roads in the desert are now overgrown with brush so it’s hard to get a larger vehicle on them. They used to drive jeeps and trucks on all these smaller roads so they kept the brush trimmed, but now a days they drive these smaller rigs on them and the brush has narrowed the roads a lot from what they were in the old days.

2 Responses to Another Fine Day Paddling Jenner, But Too Cold to Work at Home