Another Day Traveling North On Highway 95 and Home Again

This was last night’s camp spot up near some old mining stuff. 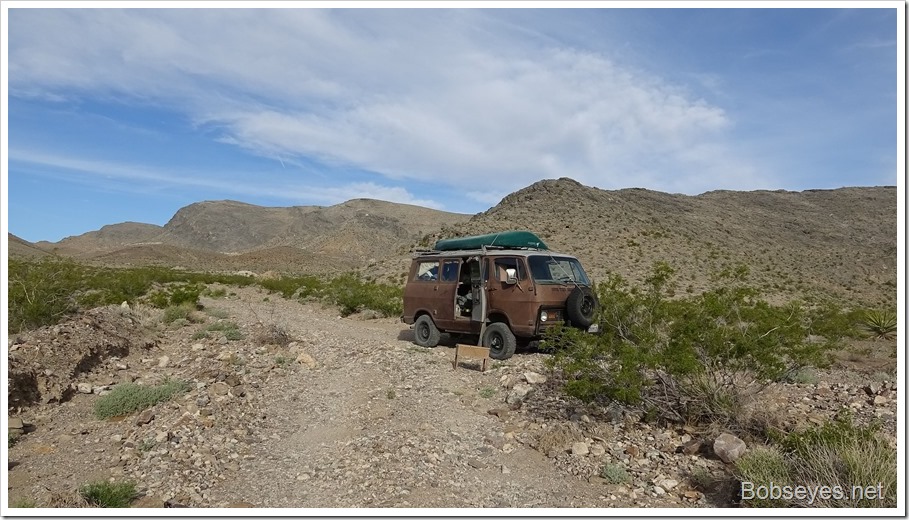 The first thing on the agenda was to tighten up the van’s fan belts as I’m tired of hearing them squeak every time when I start the engine. 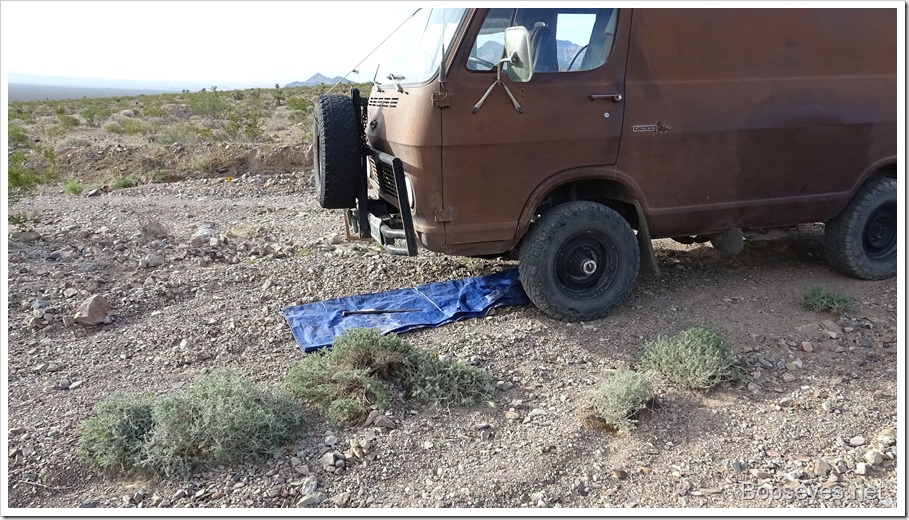 Then I went for a little walk around to see what I could see around my camp area.

I spotted this old cabin by an old mine. 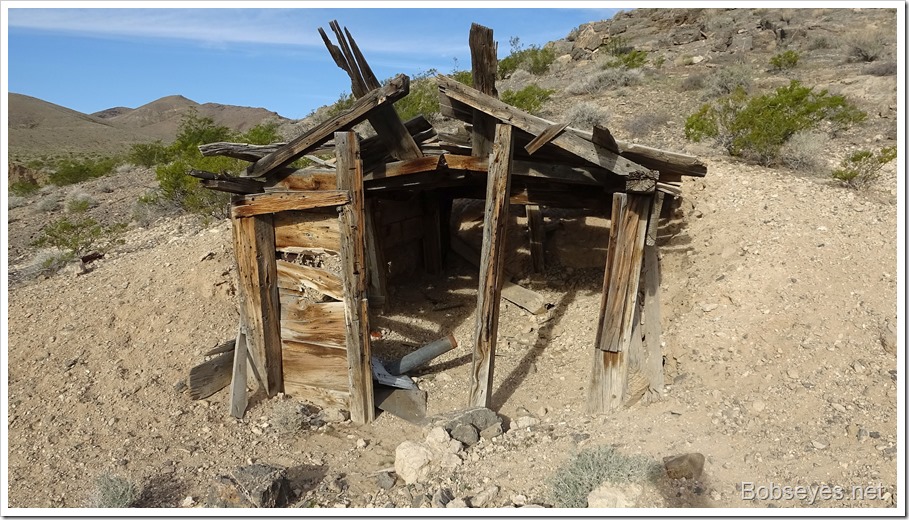 And it looks like they ate a lot out of cans as there were a lot of them around here. Actually cans seem appropriate out here a long way away from a store in the old days and not much in the refrigeration department in the in those days. 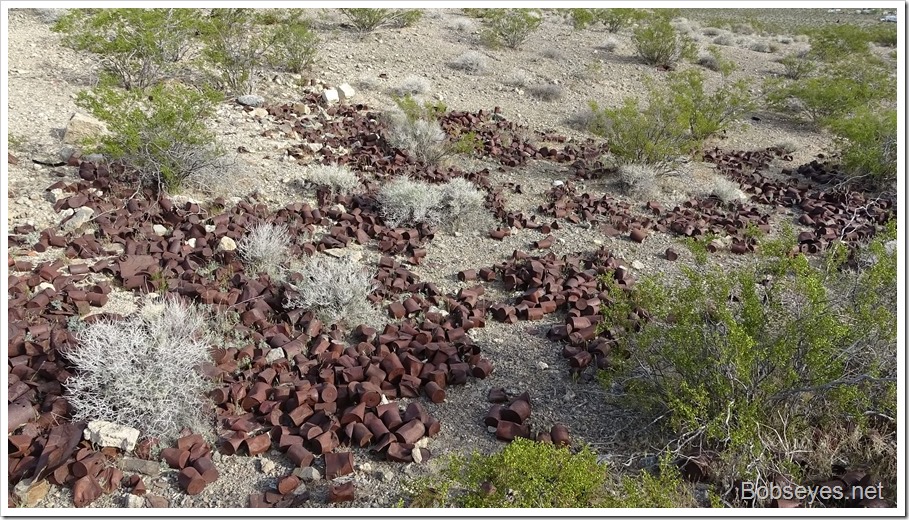 It’s been real windy so there was a lot of dust in the air as I started up the van and headed down to the highway, I think I was on 160 north and sorta heading up highway 95 north. 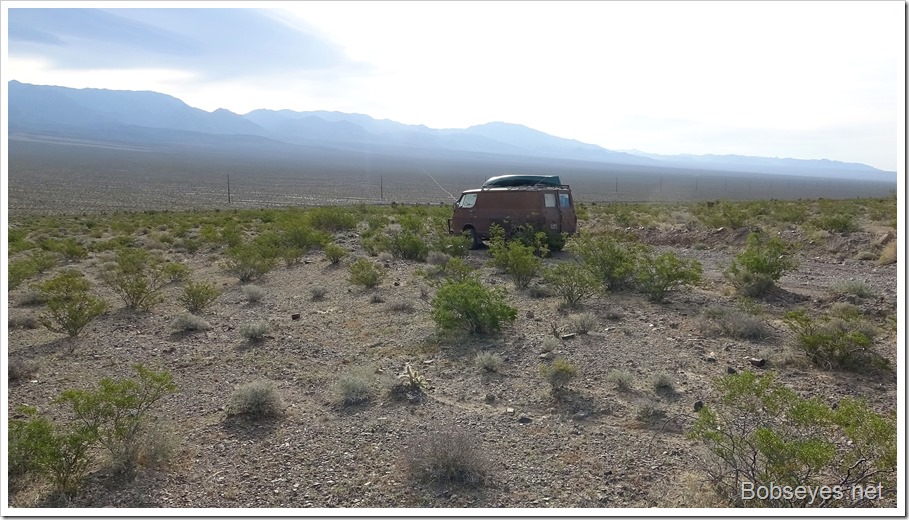 It’s a big area I’m traveling through with big valleys and mountain ranges. 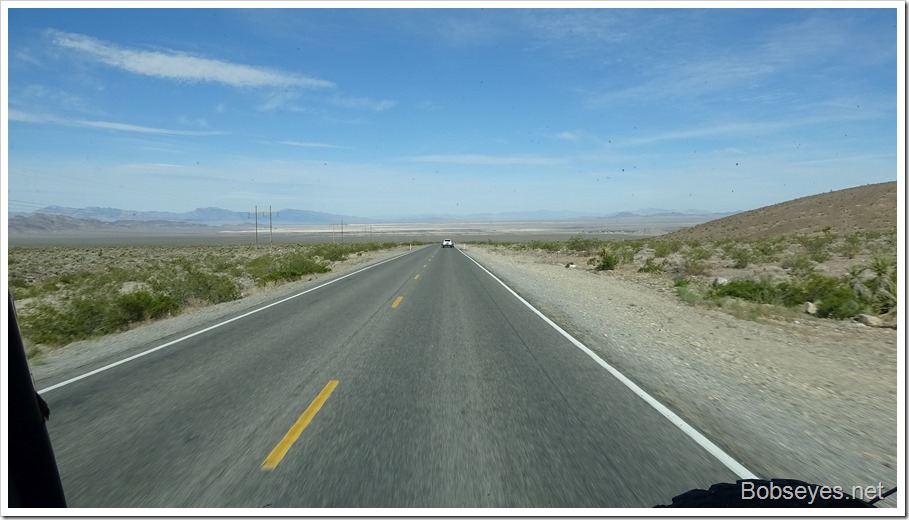 The highways are mostly nice and straight and mostly 70 miles an hour. 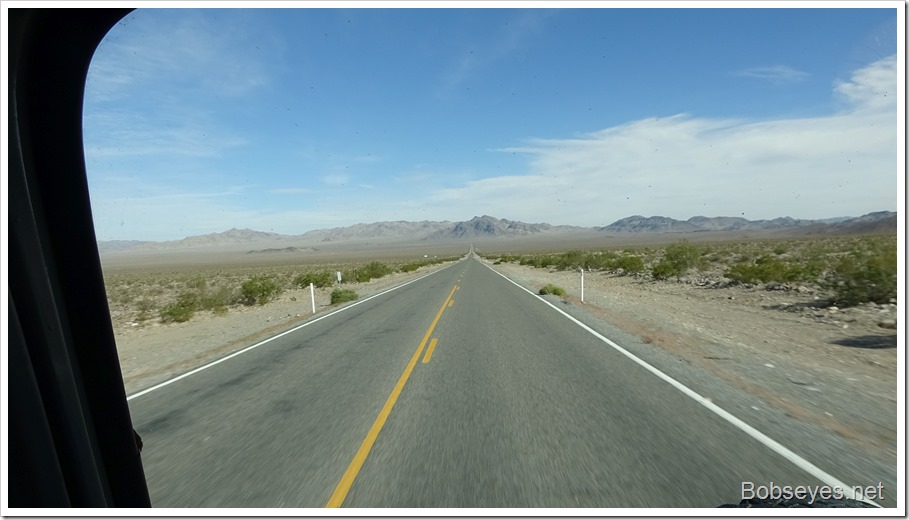 I travelled all day and pulled through Yerington around five and needed a spot to camp for the night.

I’ve noticed there are more open roads around the populated areas, just outside of the towns so I was watching when I left Yerington  as I needed a camp before I got too close to highway 80 and civilization and it would soon be dark.

Not far out of Yerington, I saw a big dirt road to the left that looked promising, so I took it and it opened up onto an old abandoned mining area. Good enough for me.

I pulled up among the mining ruins and parked here for the night overlooking the valley below where Yerington is located. 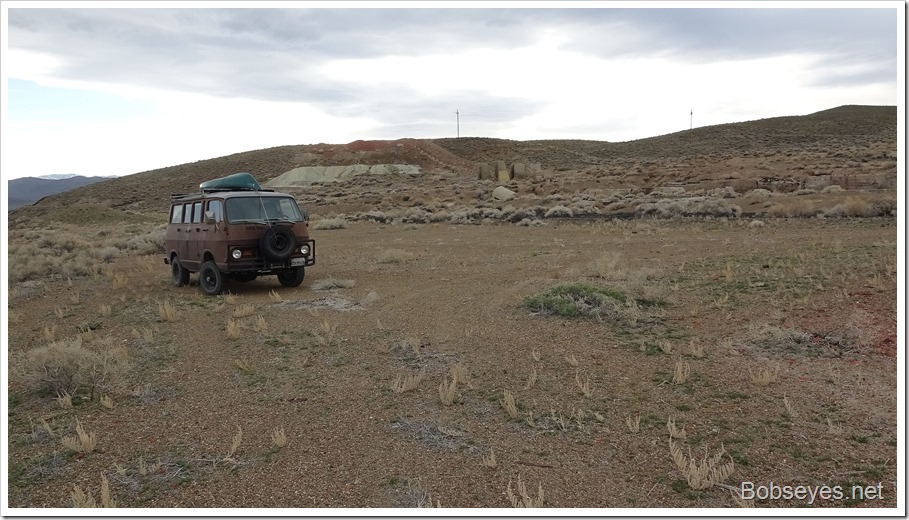 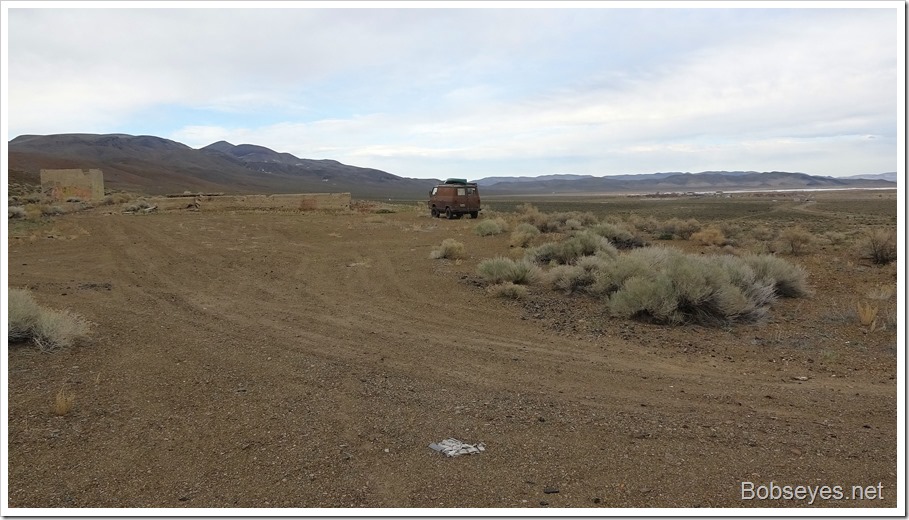 The mine appeared to be an old copper mine and it had lots of cement things around to look at. By the amount of the cement stuff it must have been a rather big and successful mine at one time. 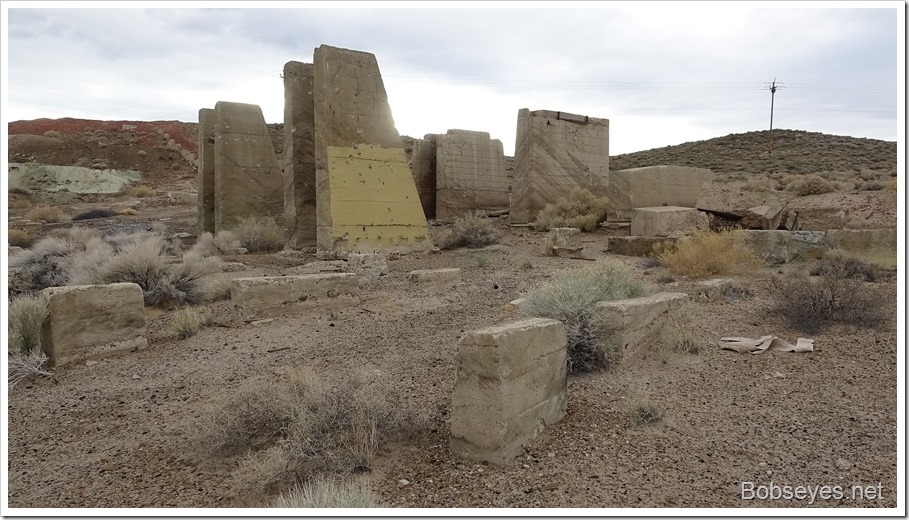 I spotted this guy trying to get some sleep by a cement slab as I walked by about six feet from it. It didn’t move and likely just wanted to be left alone…………., But.

I tossed some tiny pebbles at it and didn’t hit it but it finally turned and crawled under the cement shaking it’s rattle a bit.

What were things used for

I always like to look around at the old stuff and see if I can figure out what they were doing to the ore in olden days.

However I’ve seen more gold mines in our areas as there’s lots of gold country in California so a lot of what I saw here I couldn’t figure out as this is copper country and they mill it different than gold.

Somehow they seemed to bring the ore down from up there where the mine is down to here to start the milling process. 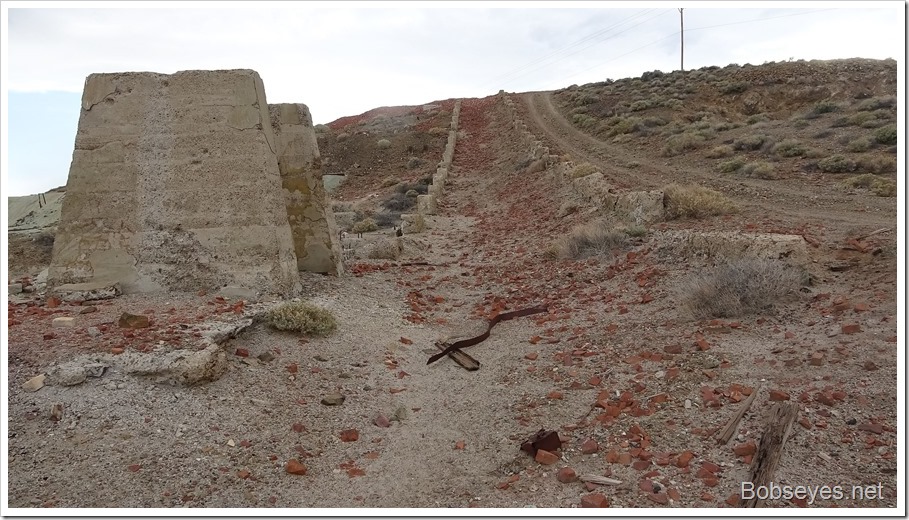 While exploring around the mining area I ran into this, someone’s little paradise camp. Nice and neat and clean, although it didn’t appear to being used much lately. 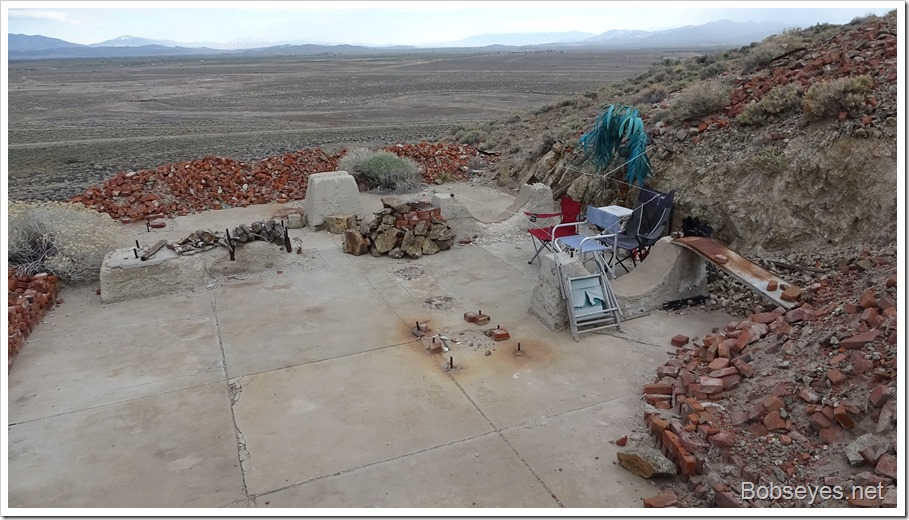 This old  mining area seems like a good spot to spent the night, it should be nice and peaceful.

I’m almost to highway 80 west which  leads over the mountains towards home which I should be able to make by tomorrow driving most of the day.

I made it home today around six PM.

(Visited 240 times, 1 visits today)
This entry was posted in Uncategorized and tagged Old mine, yerington nevada. Bookmark the permalink.