Another Busy Day With the Forest Fire Guys

I had no idea what I was going to do today as far as forest fire stuff.

Once I got it going around 9, I fed the chickens and had something to eat myself.

Just about the time I was finished eating I heard a dozer going up the hill somewhere so I jumped on the dirt bike and rode over to where I thought the sound was coming from and I caught up with him just above the old Armstrong house at my neighbors. He was hurrying up the trail. 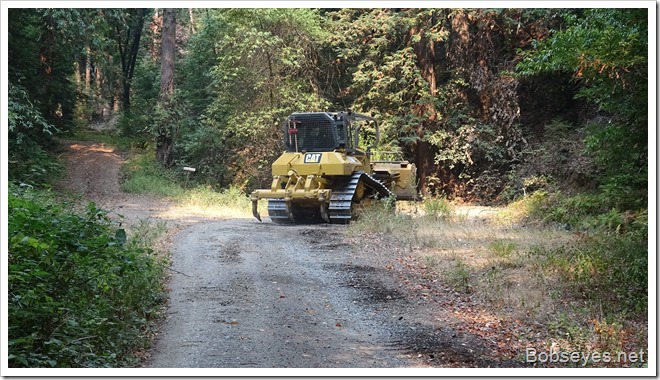 I followed him up to what we call the Y on Pool ridge road when the dozer guy stopped. My brother Tom must of heard the dozer too as he rode up just as he stopped and got out. 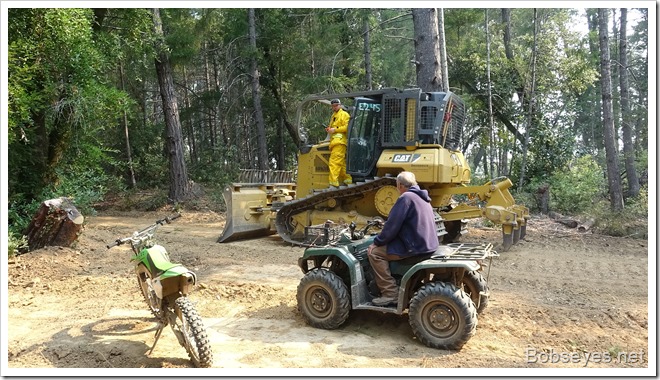 He was supposed to  meet another dozer up here on this road. It’s hard to tell where you are up here if you aren’t in the know so we let him know exactly where he was and where things were on this road.

Once he was sure where he was he continued on up the road.

I’ve been trying to get them to remove this stump so I asked him to remove it but he said if he did it might leave a big hole in the road and he’d have to stay around to fix it and he didn’t have time so it didn’t get removed.,,,,,,,,,,,,,,,yet. 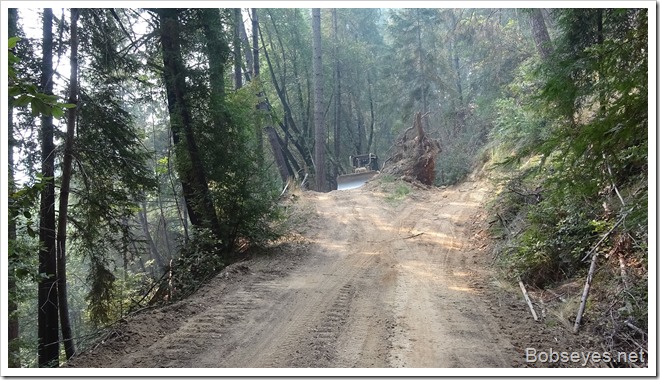 Here’s the big stump that fell down in a mud slide a few years ago. My little dozer wouldn’t push it I made a place to get around it a while back. 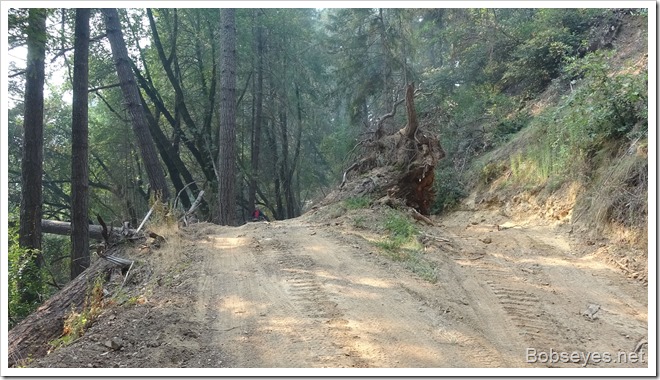 Tom and I made it up to what we call the turn around where there were a bunch of dozers parked. They were doing the daily maintenance before going off to work for the day. 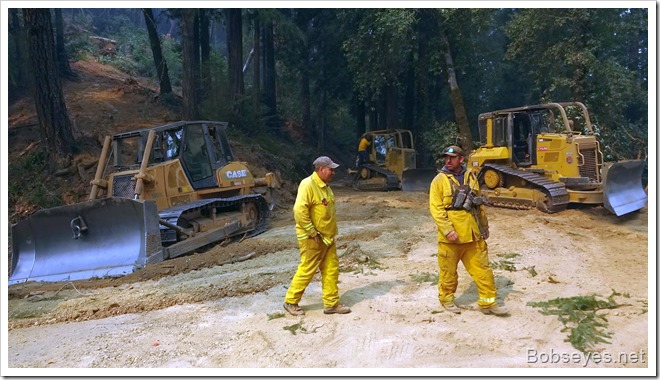 I hung around there when the Monte Rio fire chief drove up, a guy I know in the middle. He’s helped and recued many people in this area in his life time and is getting up there in age but says he won’t quit. 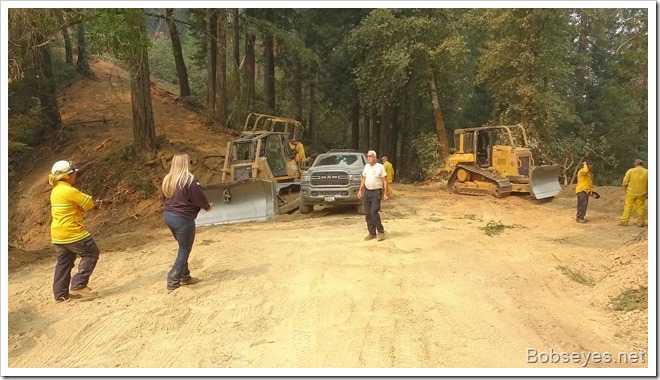 I saw Katherine in  her truck so I followed it down the back hill where she stopped to get feed for her animals. She has 200 goats and I know not what else. 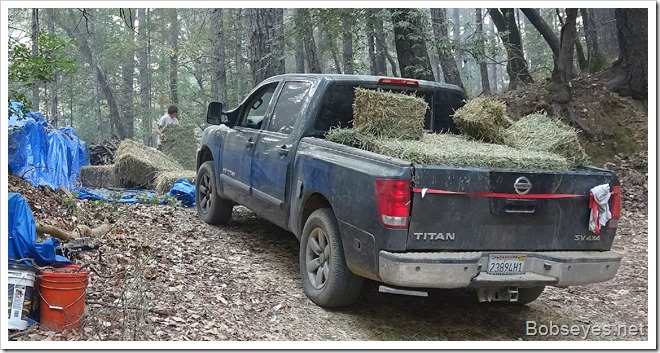 The fish and the silt story

I chatted with her and apologized for not staying and helping out the other day the fire was approaching there place. I didn’t stay because they seemed to have things under control and I had worked so hard in the morning my body was shot and I couldn’t hardly move and all I could do was ride the dirt bike. I also told her the story about fish and silt and how I feel about silt not harming fish which I’ll tell you eventually but  maybe not today.

I drove back up to the turn around where they were working on the broken down dozer on the left. A tree went through his engine’s side screens and did something to his radiator hoses or some thing like that. 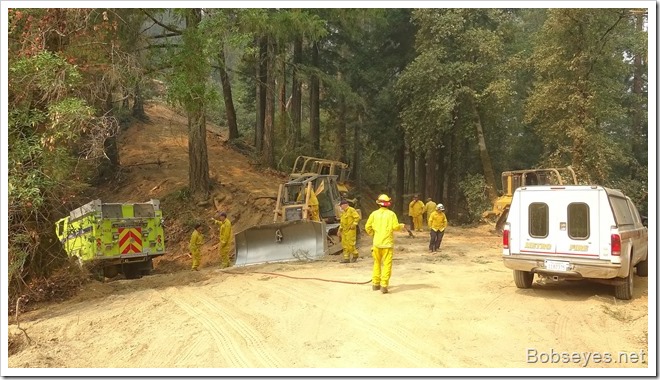 Armstrong tree, the big one

From there I rode on down into the main park where these guys were watching the fires that were slowly burning by the Armstrong tree which is off to the right which you can’t see. 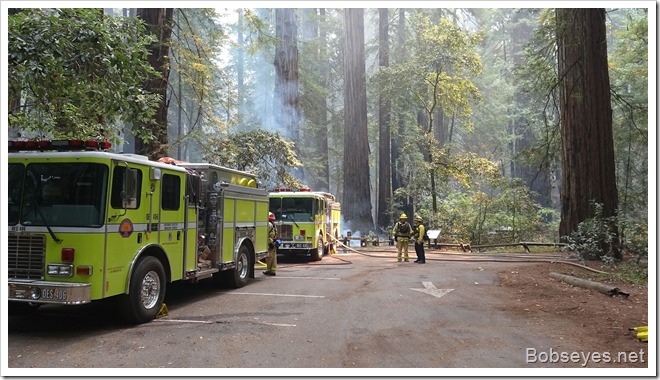 Here’s the harmless smoke that was smoldering which they were watching. They could put it out but the truth is this kind of fire is good for the forest and does way more good then harm. That’s the trail to the Armstrong tree. 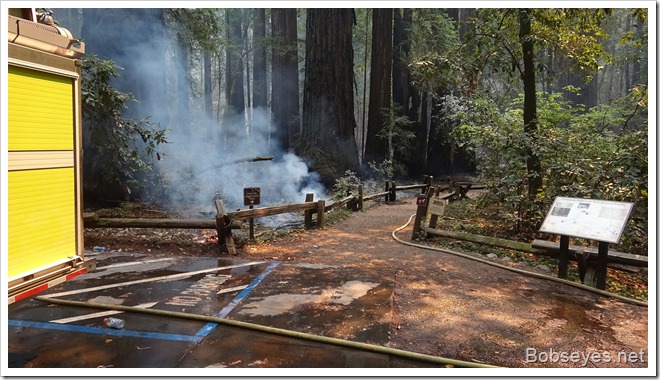 Park guys and the boss man

Then I rode on down to the parking lot at the front of the park where there were a lot of park employees at work. I stopped to chat with the guys on the right and asked if they had cut the big log off the steel bridge yet. They hadn’t done it yet as they were waiting for someone to arrive with a bigger chain saw than they had. 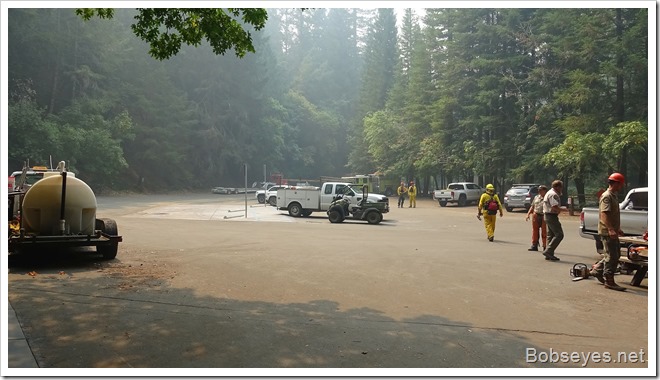 The Captain that said he didn’t like motorcycles running around in his park was sitting at the table so I said good morning and he was very pleasant and I had a nice chat with him later in the day.

I went home to check in with my brother and check my email.

After a good break I rode back up the hill to check on some stuff going to the Y on Pool Ridge Road where I heard some dozers.

This was the site as I approached so I chatted with them to see what they were up to and told them what I knew about where they wanted to go. 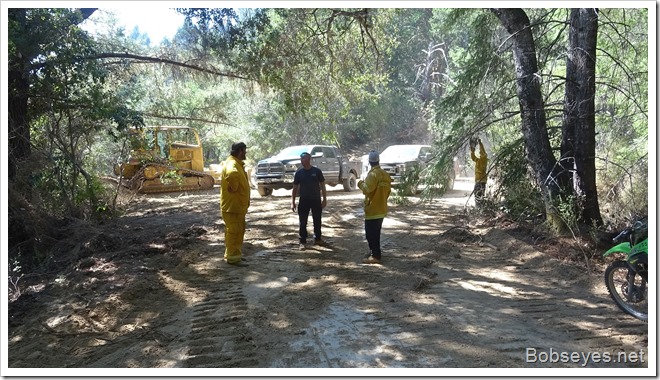 I left there and drove on up to my cousin Laura’s house to check on it as she’d heard it might have burned this morning. I knew the fire hadn’t been in here yet so got some pictures for her. The dozers had cleared a good path up to her place for a fire break. 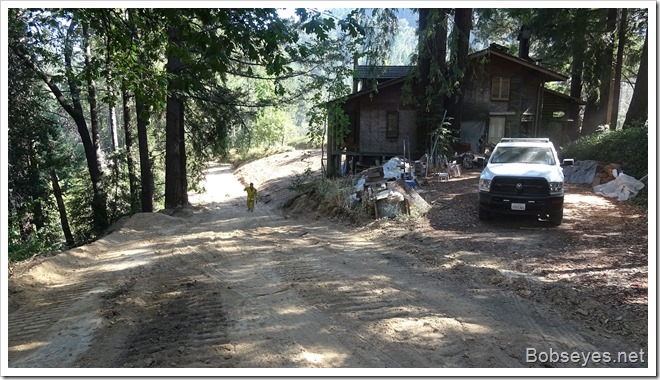 This truck was stationed there for when the fire might come through. I chatted with him and he thought he could save this house if the fire came through which if might. 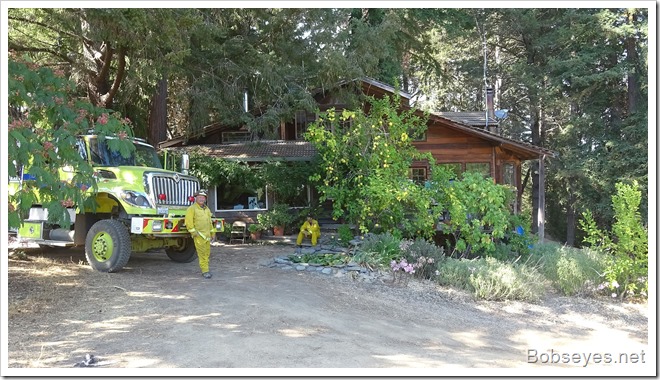 I went back up to the turn around place on the road and rode out the road to the right where it was smoky and the fire had just burned into. Things didn’t look too bad in this spot although it was smoky. 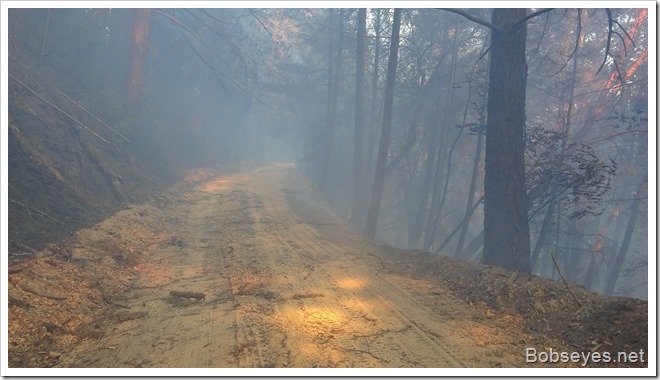 So I went on home and sent my cousin an email about her house and called my brother Barry and asked him to call her so she can relax.

I hung around the house for a bit and napped a little before going back out in the evening.

Above the old pack station

Just above my cousin’s old pack station I ran into the fire entering the road  there on the right. They were watching it with several trucks and men to stop it at the road. 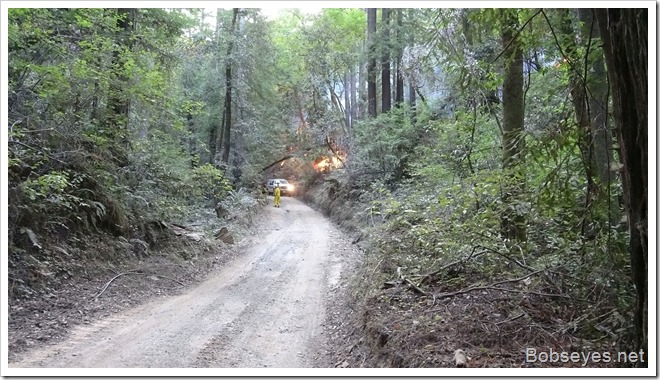 I rode on up the hill and went by this fire which was just above the other one. Slow creeping fires which are much better than fast moving ones. 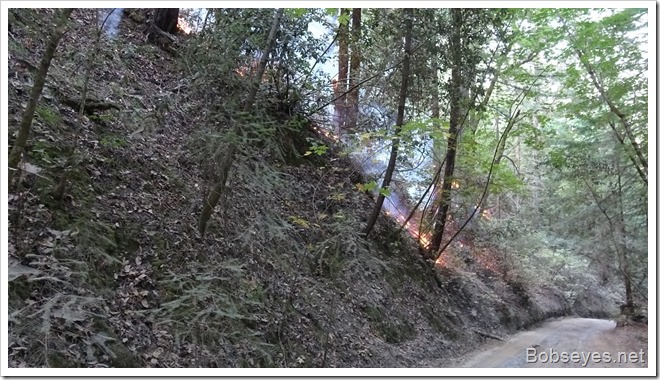 I heard another dirt bike so shut her down and waited and Rick Decarly showed up on his dirt bike so off we went to this spot that the dozers had just opened up so all the dry ground was dusty and real loose. 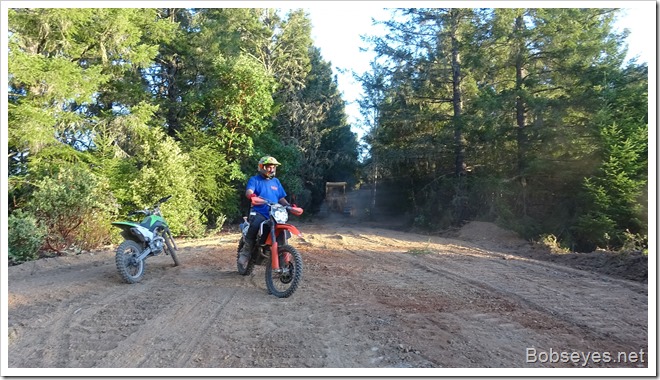 As we  sat there two dozers were clearing a wide fire break on the ridge back. 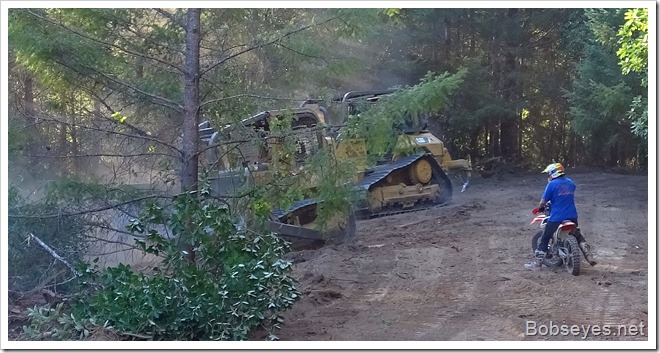 They’d just opened the Goat Trail  to make a fire break. The dirt was real loose and dusty. Rick thought he could make it up and he fell down on his first try. He spun out on the next two tries but on the fourth he made it through to the Top of the World. My bike doesn’t have the power his does so I said I go around and see him at the top.

Here’s Rick on his third try were he spun out and had to come down and try it again were he made it. 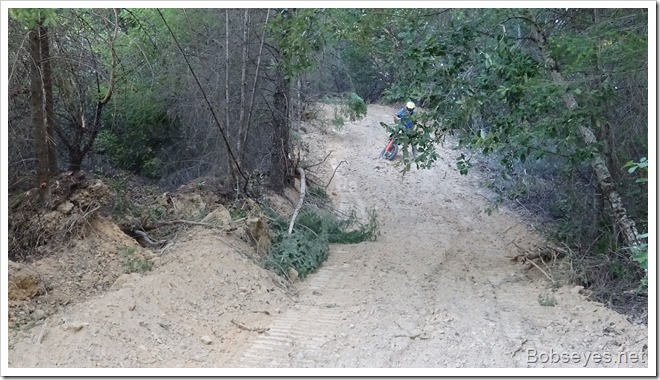 After that we rode back over to my cousin’s house to check things out.

We pulled in here were Rick and the fire boss had a good discussion about dirt bikes.

The red truck was added to the place for fire protection so now there were two trucks standing by to protect the place if fire gets to it so I think it has a real good chance to make it. I decided not to tell my cousin what was going on  as it would only worry her and tomorrow will be soon enough and I expect the house to still be there. 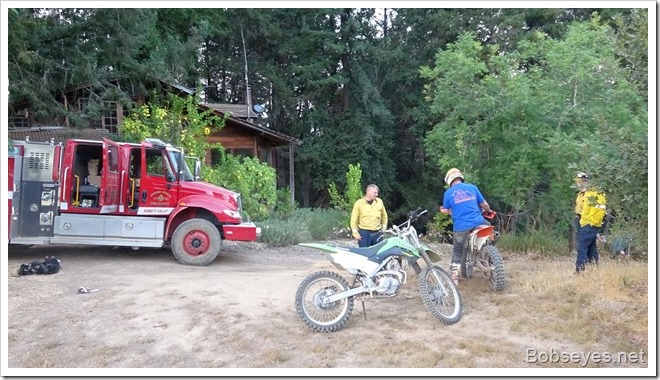 We were fast losing daylight as it was almost dark so after a false start going another way to get down off the hill we decided to go back down into the park and this is what we saw on the road above the old pack station.

On the false start we found that they had finally removed the big stump on the road. No stump here now. 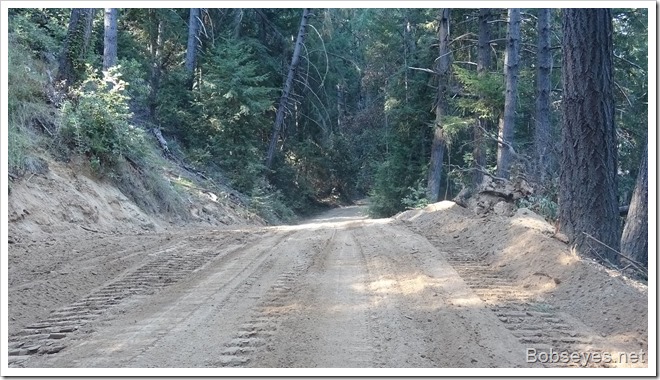 Fires on the pack station road

The fire had just made it to this spot and the fire guys were ready to start a backfire. They had their water hoses all laid out up and along the road. 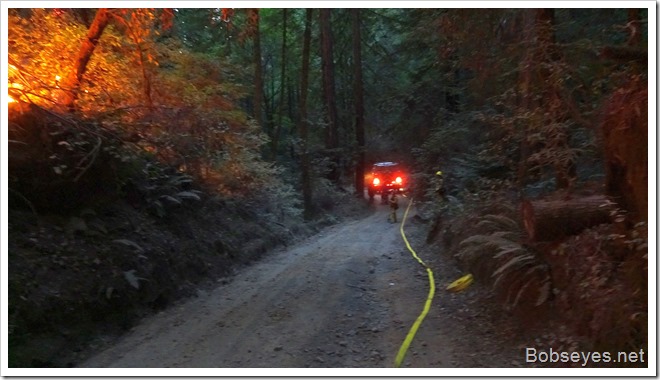 As I rode down the road I went past the fire and stopped to get a picture. 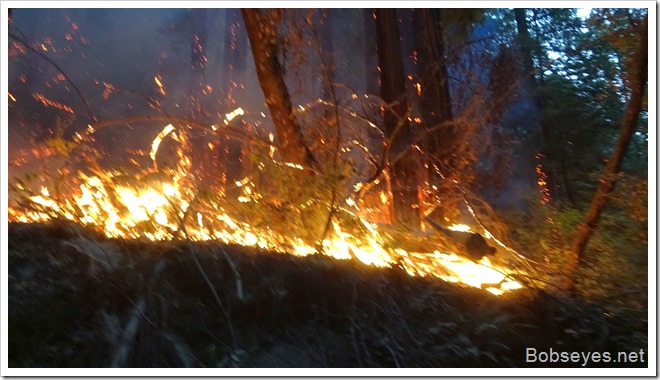 As I went by park headquarters I ran into the park captain that didn’t like motorcycles going through his park were we shot the bull for a good half hour and I  had a hard time getting away from him as it was getting dark quick.Turns out he’s the boss man of this park and really not a bad guy.

I went on home and put the chickens away for the night and went on in the house.

I didn’t think much was going on today but it was.

When I go outside I can hear the dozers working which sounds like dragons roaring in the hills.

3 Responses to Another Busy Day With the Forest Fire Guys