After checking out the bad tire and replacing it with the spare at the Duck Valley Indian Reservation  I headed up highway 51 and turned onto the Shoofly Cutoff road that went up along the Snake river more or less heading west.

Some of the road was like this and a small piece about 15 miles was gravel with a bit of wash board, but mostly a  nice road with little traffic. 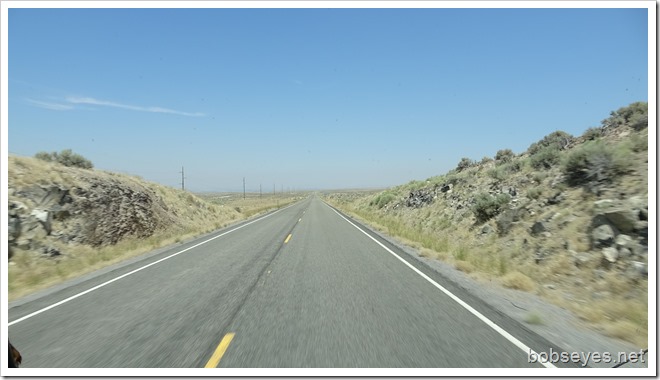 The road went through a lot of farm areas where they were growing alfalfa, hay and wheat mostly. 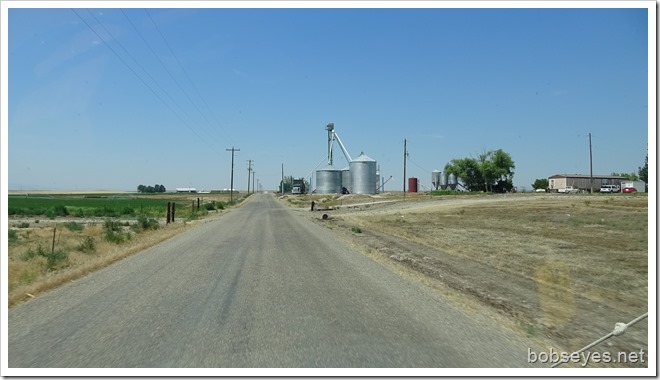 What’s the big boxes around the fields

Have you ever wondered what the big boxes along some fields are all about. I wondered for years until I finally found out what they are used for as I’ve seen them often mostly around alfalfa fields. 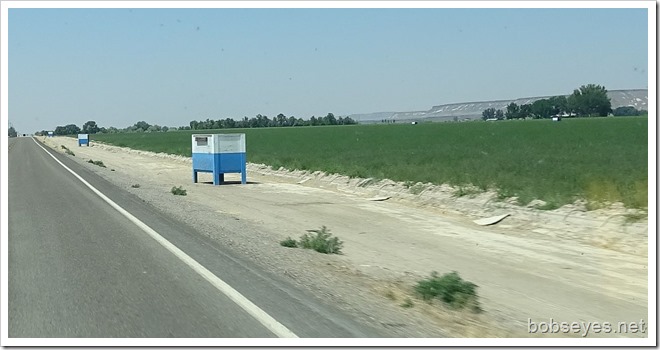 I thought maybe bees but when I got a look inside while passing by you could see there were no bee hives in there.

Somewhere along the line I finally found out. They are used for pollinating the seeds on what they are growing in the field. They use carpenter bees which aren’t really bees. But they do gather a lot of pollen so they are good pollinators. They live in small holes about five sixteenth inch wide and an inch or so deep so all one has to do is put a lot of boards in there with holes drilled in them and  get some bugs and that’s it. They are hearty and don’t require any maintenance which is also good. So now you know too.

There was a lot of farm machinery moving around on the roads. 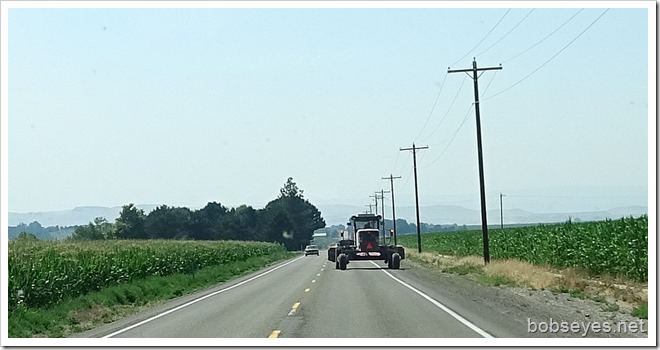 They were growing a lot of hops in the area too on the right side. 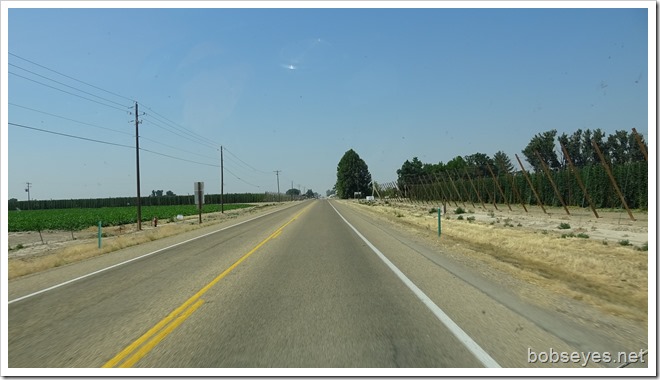 I drove all day keeping my pace at around 55 miles an hour. At the end of the day I  pulled onto a National Forest road and found this spot to camp for the night. It was just past Burns on highway 395 heading west. 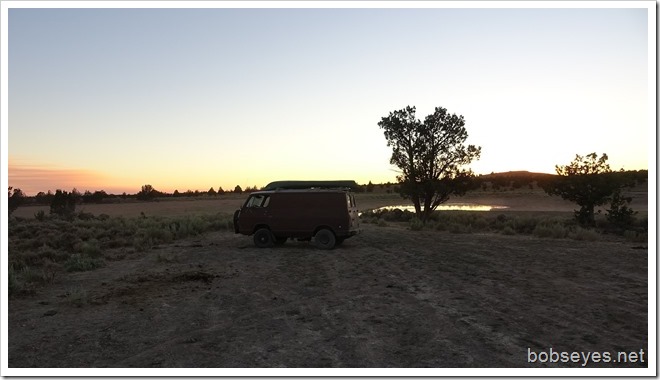 There were no mosquitoes and it was nice and peaceful. I woke at day break but stayed in bed until just before ten as I felt like taking it easy today. So I took my time and was on the road around noon heading mostly west.

Christmas Valley, But no Christmas trees

I was headed west on this road which goes across Christmas Valley for a long ways. 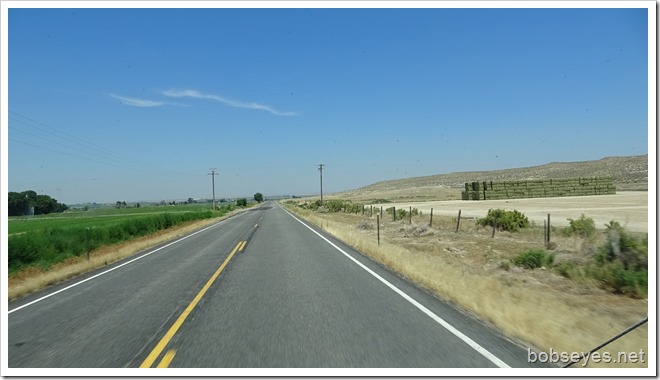 Christmas Valley is a small place with lots of big farms. It’s real big in agriculture as I passed by several big agriculture tractor and equipment places. 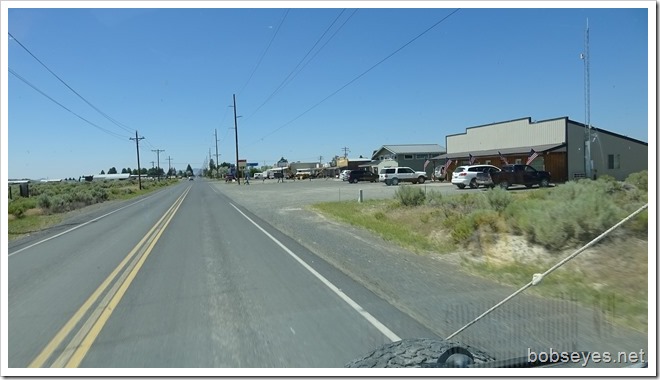 I continued on crossing the valley. I was hoping to get into some forest land soon and find some trees to camp in. 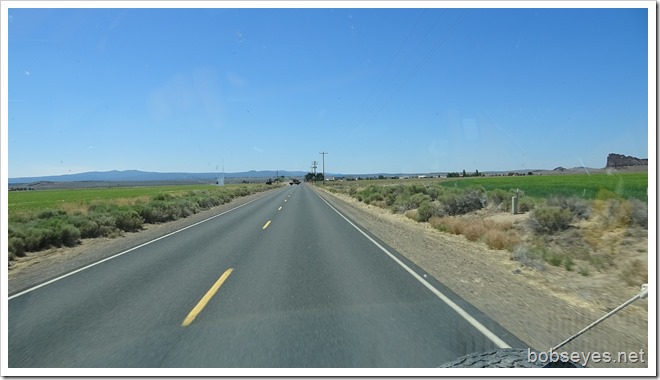 It took awhile to get out of that valley but I finally made it into some big trees and didn’t waste much time taking a dirt road to find a camp spot in the trees as I wanted to stop early today and take it easy. 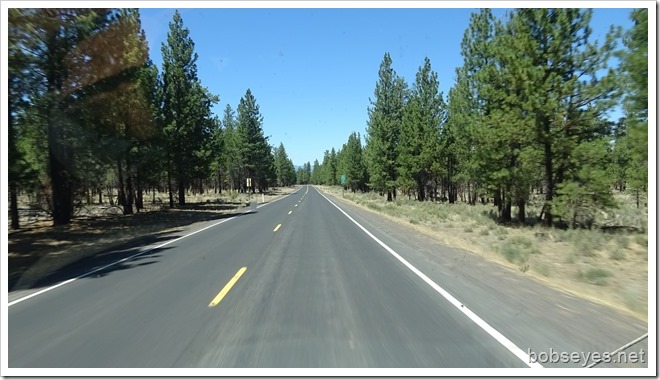 This is the dirt road I took to find a camp for the night. 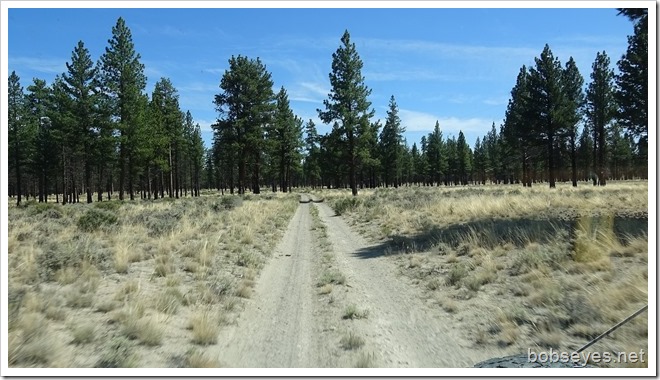 And this is my camp spot, nobody else around. I made it here by 3 PM. 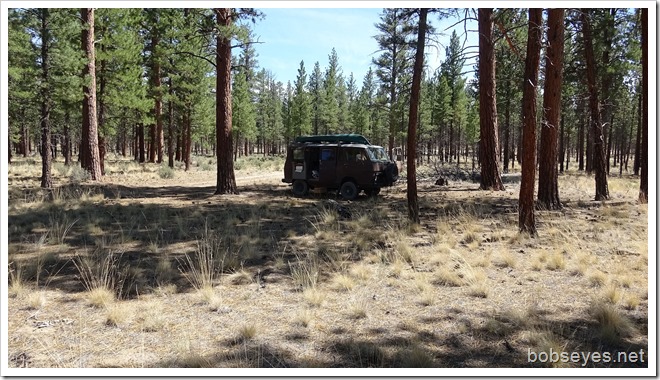 My plan right now is to continue a little further west tomorrow and find another camp spot early in the day to relax and enjoy the spot. I’ll likely head on into Port Orford the next day. I noticed a place about a mile from here on the map called Hole in the Ground so I should check it out on the way out.

So far I’ve been having an adventure. Adventures don’t necessarily have to be good all the time, but they are still adventures and I try to make the best of them and except for the tire trouble, it’s been good. Even the tire trouble turned out to be good as I had to stop and meet some of the locals which is not always easy to do. Both guys that helped me with the tire problems where real nice guys and I’ll likely stop in and visit them on the next trip as they are more of friends now. If not for that flat that wouldn’t have happened.

And to top it all off  just as an example as I left the computer lab and was leaving town a brown truck was approaching and a big ol arm came out of the window and started waving away. It was Joe, returning from dropping the wood they cut the other day at his buddies.

I gave him a good wave back and a big smile too.

Marty is on his adventure

My buddy Marty who had to abort and go home, went up to his cabin as he has a couple weeks of supplies to use so he continued with his adventure when his plans chanced and still is having an adventure, just not with me.

So it’s what you make it.

And right now I’ve driven enough on all my tires to say they are likely ok. With how much damage I had on the one tire I wasn’t sure if the other ones were ok, but they seem to be.

Something I didn’t tell you

On my way in the other day I got on a wrong road and saw this box opened up on the road so veered to miss it. I missed it about a foot with my left front tire, the one I have two  holes in. I didn’t see all the stuff until it was too late and I still didn’t know what it was as it happened so fast. But since I was on the wrong road after going a bit to explore, I turned around which brought me back to it so I stopped to see what it was.

Among other things it looks like a Kbob kit as there were over two dozen metal sticks, some steak knifes, ice pick and an assortment of other stuff. The big fork might be what put the two punctures in the tire as the spacing is about right. The box was open and had been run over when I just missed it. The other stuff was scattered around the box about a couple feet. The small slice in the same tire was likely caused crossing Rock creek or I could of hit a rock most anywhere for that one.

Anyway here’s the box with all the stuff. Someone will be missing this. 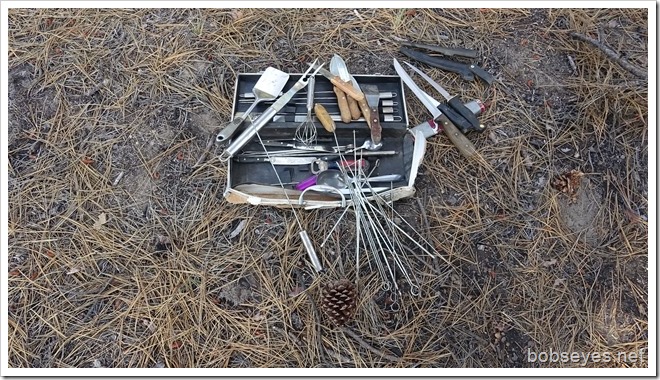 After I got my camp set up and rested I was thinking sweet. I had these ingredients to make some peanut brittle, so I shelled a cup of peanuts. Sugar, nuts, butter, baking soda. 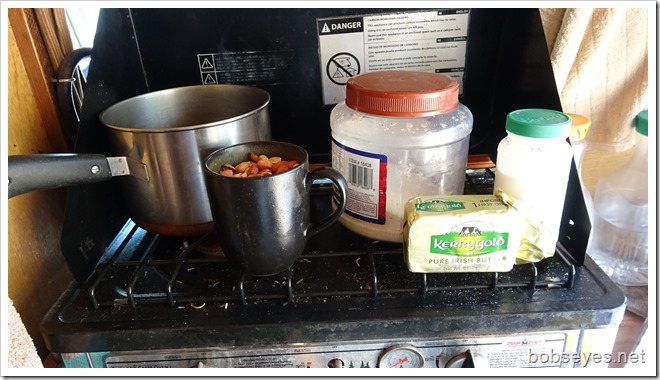 And made some peanut brittle. Here it is cooling. 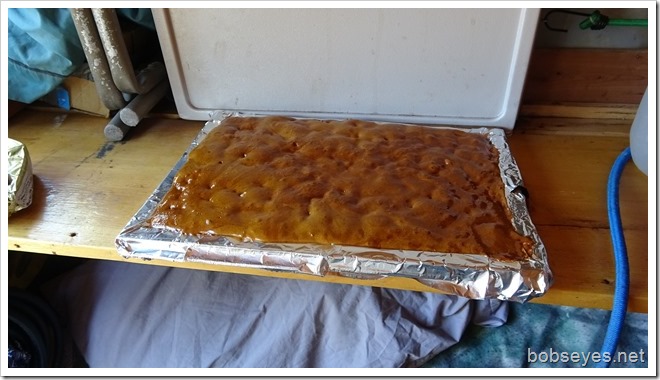 That’s it for another adventurous day.