Alternate Route To the Desert Bar Doing Some Rock Crawling

A day of jeeping

While I was in the Kofa the other day I noticed my instrument cluster had come loose and was rattling around a bit. Yesterday I removed it from the van to have a look. It didn’t look good as the plastic that held the screws in was worn out and gone. 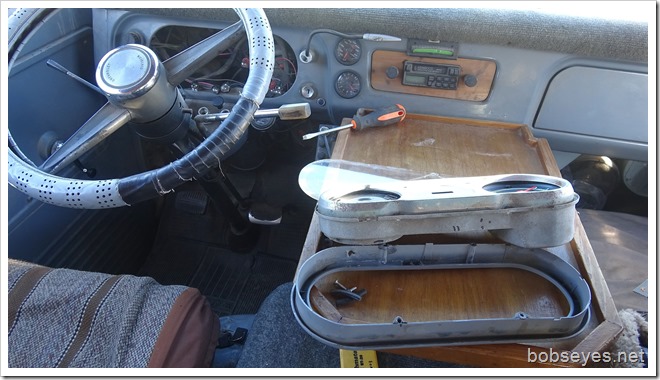 I applied some epoxy to the broken pieces but decided they likely wouldn’t hold up before falling apart again in a short time, so I put the parts aside to think on it for a bit.

Headed out to the Desert Bar Area

Today I was joining Marty and Patti on a jeep ride with the Wednesday bunch even though it was only Tuesday.

They’d planned to go up above Parker to the Desert Bar area and do some serious jeeping. If you don’t want to take the main road in to the bar, there are plenty of alternate jeep roads one can take, so we did.

We stopped to air down at what the group calls the Five star restroom place.

We were leaving the main road and headed for some four wheeling, so the guys did what is called airing down the jeep’s tires. This makes for more traction, a smoother ride and not getting stuck in soft sand. They usually drop the tire pressure to 15-20 PSI and  air back up when they get back to the pavement. They all carry small air pumps for this purpose. 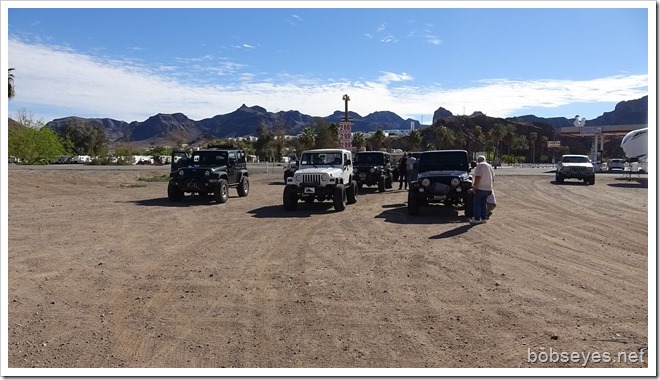 We headed up this wash headed more or less for the desert bar that is only open on weekends so it was closed today, no matter.

It started out nice and smooth. 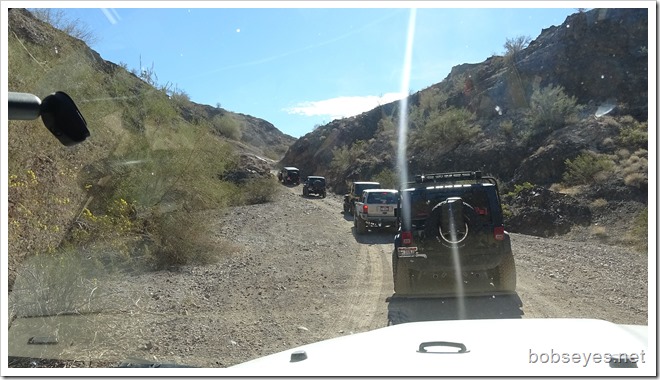 But quickly turned to rock and rough. 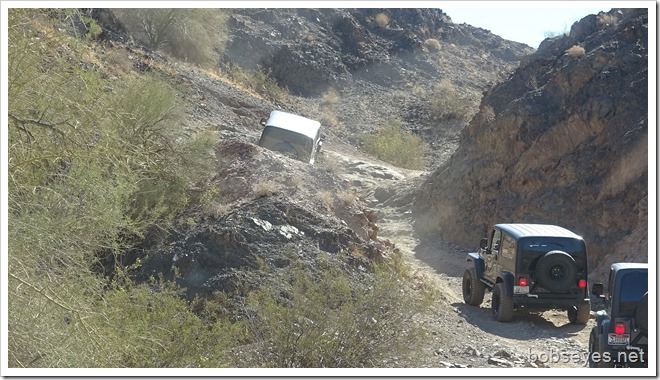 Yes we went right up through  here, bum pity bump. 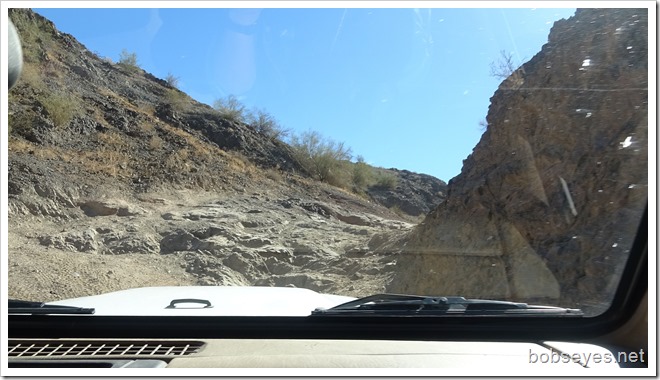 There were 8 jeep in this group and we were last. 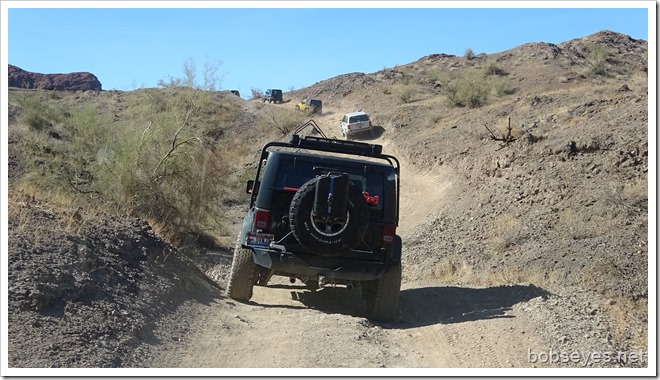 We went up this hill and did a sharp left at the top. Here’s Gene going for it. 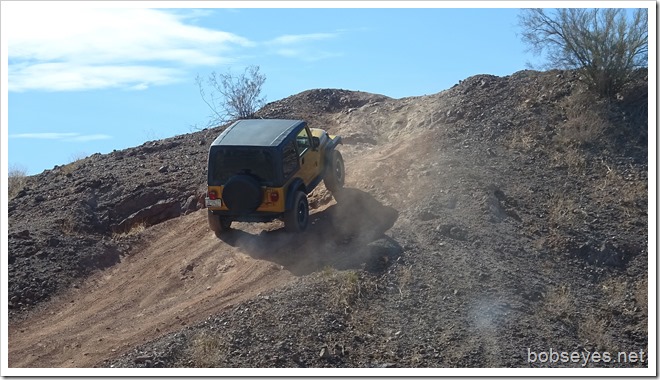 Most of the time we are following Dave and Joanne. Sometimes things got tight. 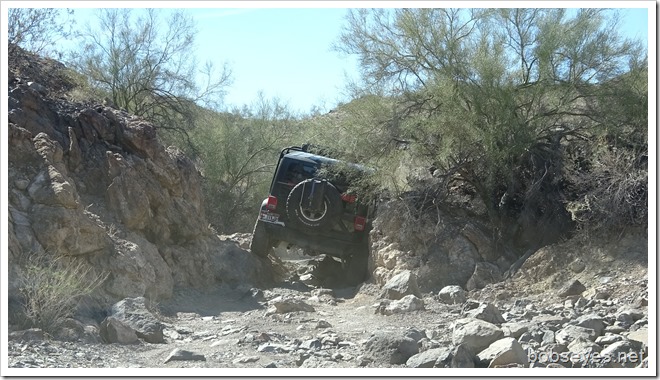 And lots of bump pity bumps. 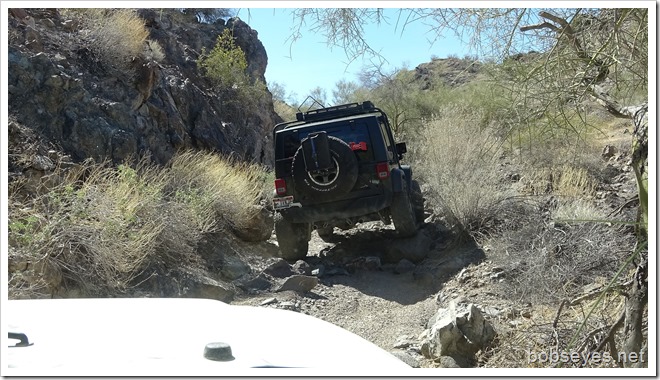 The group stopped here for a short break and a jaw wag. 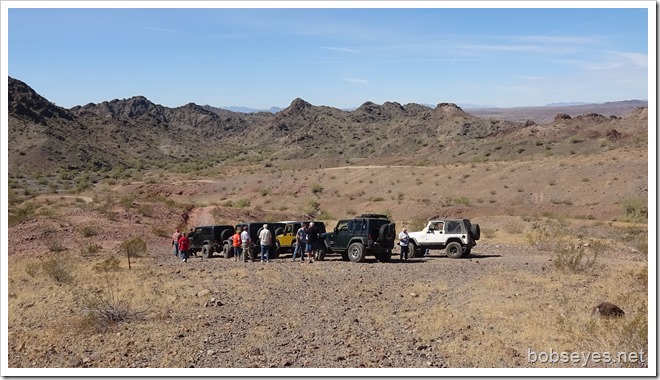 Exploring the Grey Eagle Mine

We made it to the Grey Eagle Mine. The guys had lunch while I went up to check out this mine as they said it was a good one and it was.

Here’s the gang having lunch while I walk up the trail to the mine. 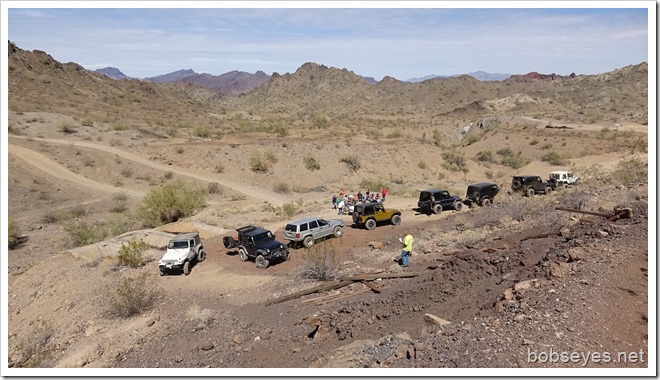 I walked along this trail to the mine tunnel just up ahead. 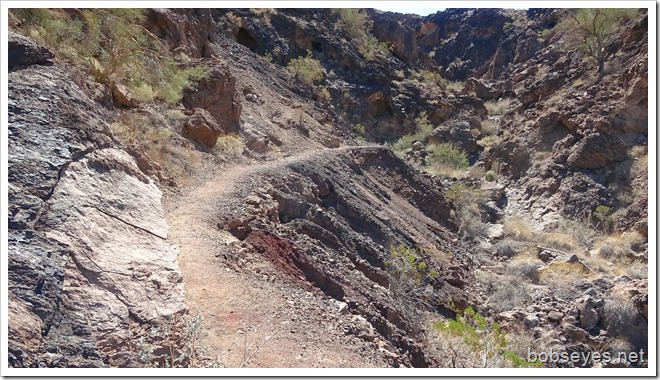 Marty had loaned me his head light so I entered the mine and this is what it looked like. It looks to me a mostly copper mine. 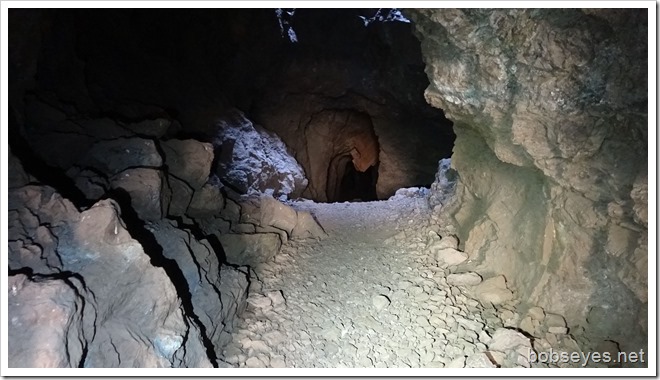 Here is one of the rock shoots they use to load ore into mining carts from up above to haul out of the mine. 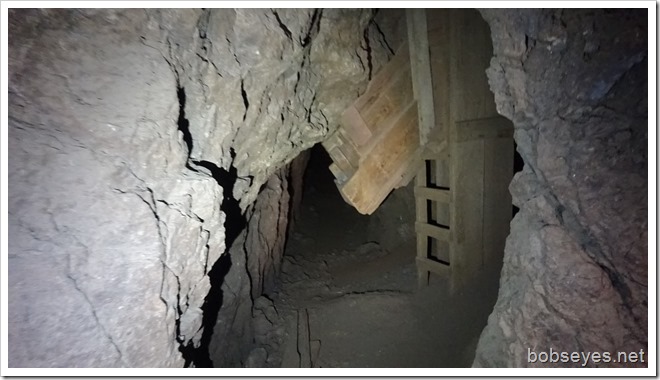 I went in to just past this spot where the tracks dove down. They would have had to pull the ore carts up this with some kind of cable winch. 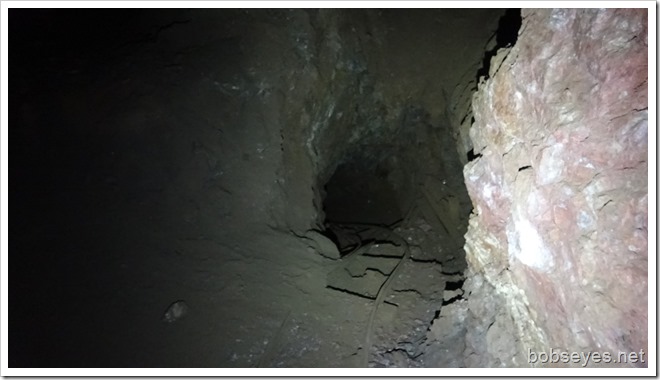 Since I only had one light, I didn’t go further into the mine as if my light failed I’d have a hard time getting out safely, so I turned back and headed back out checking the sides and roof out as I went. Lots of sparkles in the rock here. 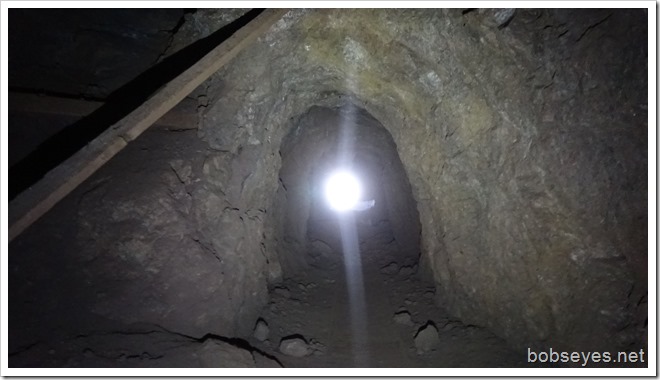 Just as I got outside the tunnel I saw Eve coming up  the trail with a flash light, so I thought I’d give her a guide as I was just in the tunnel and now we had two flashlights.

Here’s Eve exploring the mine tunnel. 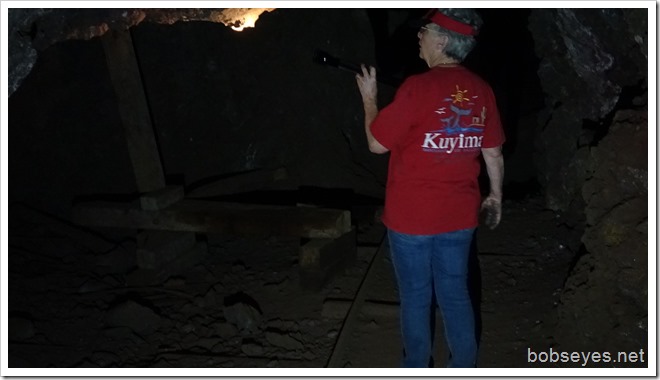 When we got to the spot where I turned around last time Eve indicated this was far enough for her so we made our way back out.

Back on the trail

When we got back to the jeeps the guys were loaded and ready to go so off we went continuing on the trail. 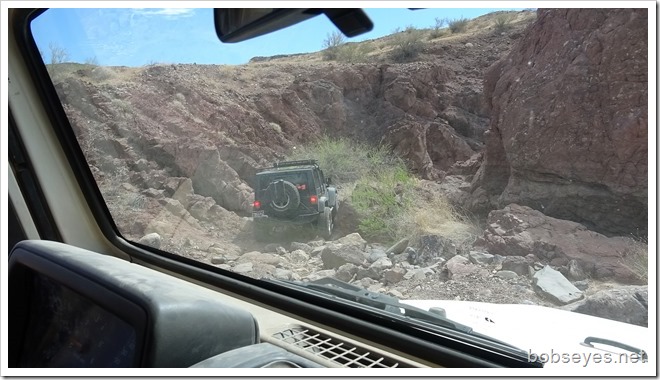 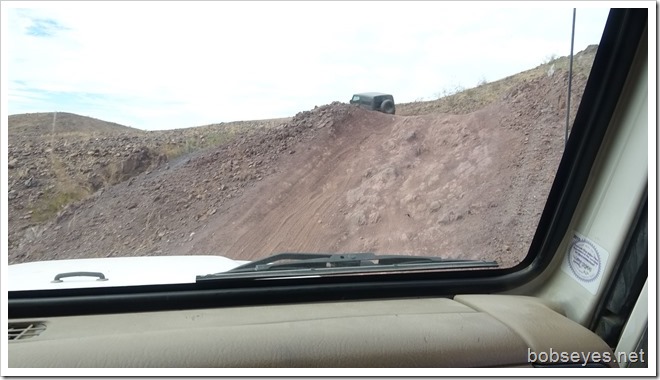 That was a fun few hours.  We aired up the tires at Parker as some of us did some shopping. After that we continued south  to Quartzsite.

New ideas to fix the bezel

After a nap I got back to work on the instrument cluster. I had decided to add as much epoxy around the stripped holes in the plastic and then drill out the holes all the way through and use screws to through bolt it. I wasn’t able to find long enough screws in Parker today so we’ll find some here in Quartzsite tomorrow.

Here’s the plastic bezel I’m adding epoxy to to beef it up. 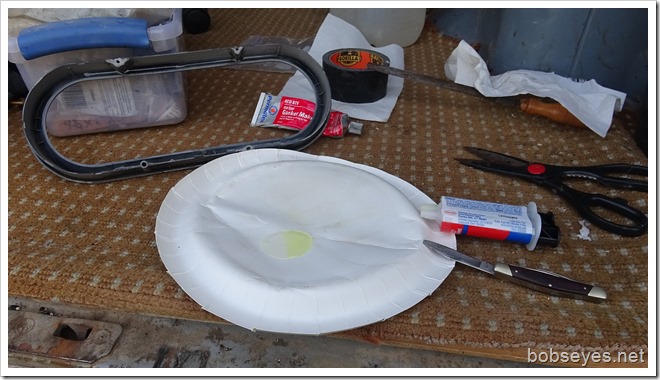 I’m adding epoxy around the screw hole bases then I’ll drill the holes all the way through put bolts in it instead of screws. 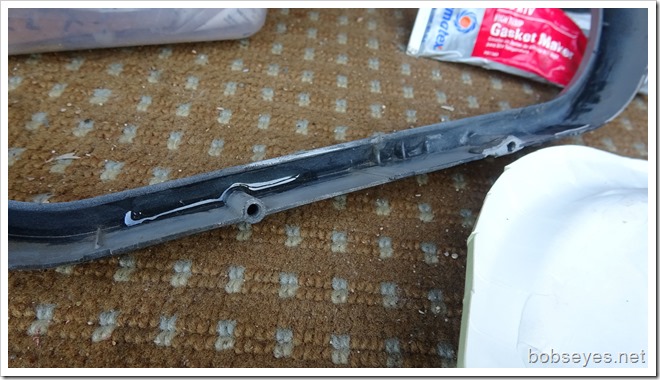 That was my day. I did some playing around and got some work done too.