Afternoon Paddle At Monte Rio Checking On the Steelhead Fishing

My plan today was to go over to the shopping centers and do some shopping. Most of the stuff I needed to buy I didn’t really need right away except for some hardware screen to cover a rodent access hole in my van.

If I got that screen at the local hardware I could go down to the river for an afternoon paddle.

So just before 2 I drove on down to the hardware and found the screen and drove the short distance down to Monte Rio to the boat ramp and put my boat in the water. It looked like fishing was on from the number of boat trailers parked in the parking lot.

It didn’t take long after getting in  my boat and shoving off to know I  made the right decisions on boating today.

Here I just put in and am looking up to the Monte Rio bridge. Monte Rio is on both sides of the bridge, a small town. 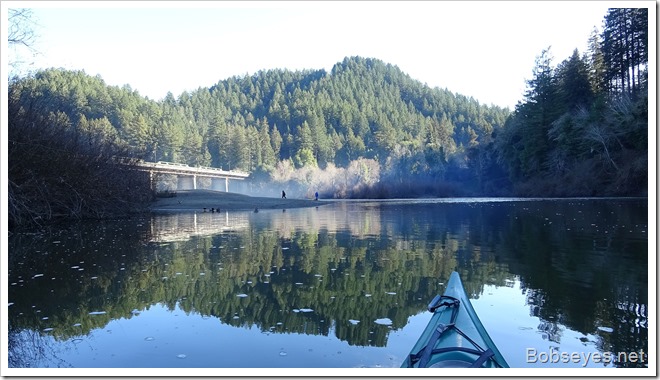 There’s always a lot of fairly tame ducks around the Monte Rio area. Here’s some taking it easy. 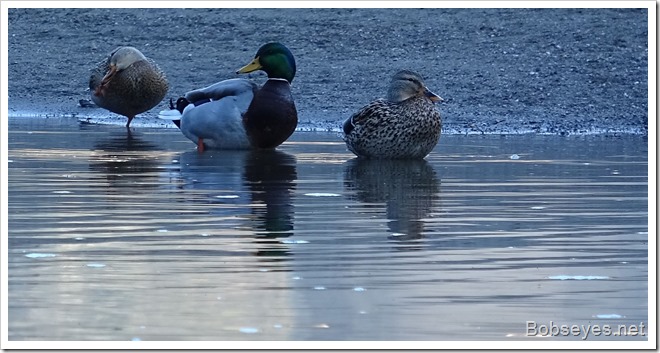 I turned my boat down river and this was the view. I could see some fishing boats down in the slot up ahead. It was getting late in the day so the sun was going behind the hill on the left. 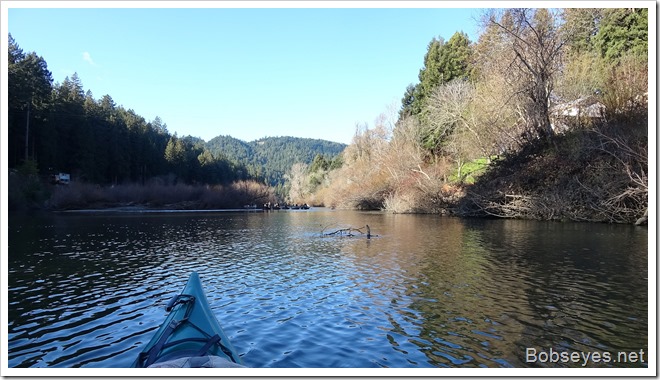 Here’s my view as I paddled closer to the boats. They are sorta dangerous to small boats as they are sitting in the current and when a small boat comes up behind them it loses all control just behind the boats and it’s easy to get sucked under them. So I always try to shoot by them and in by the trees on the right so I can stop for a chat. With fishermen it’s more like shooting the bull. :O 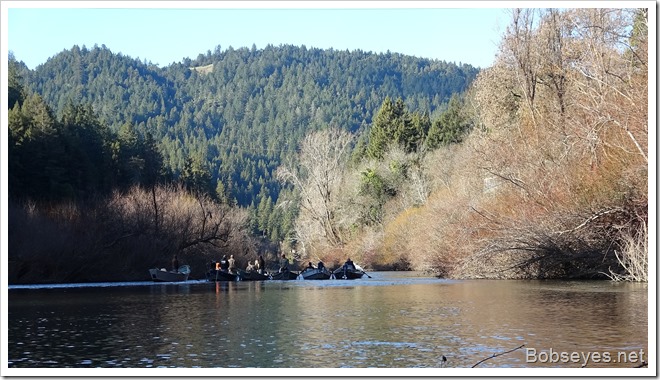 Guys in the Slot

I made it into my spot here. No keepers caught yet if I remember right but they have been catching some. I always have a real hard time with names for all these guys a lot of which is an older age thing. I do remember some of them and am always working on the rest. I like this photo and the next one. I’d call them classic. 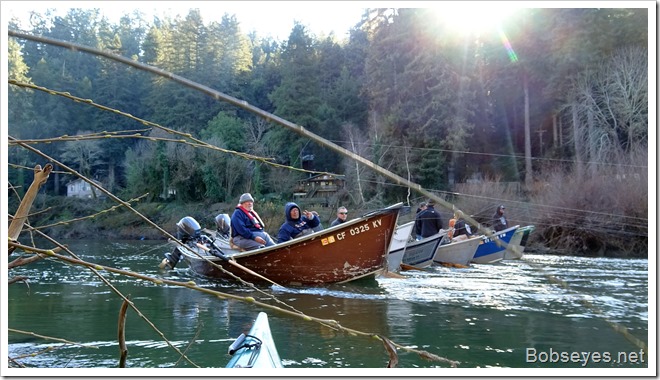 Eventually I put the boat in drift and headed down stream looking back at the group. 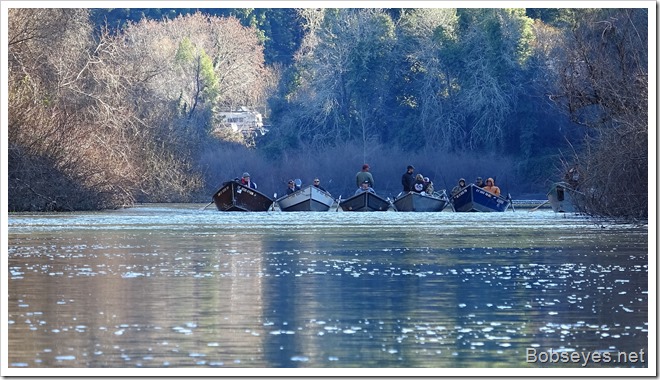 I was headed down to Villa Grande maybe a mile or so down stream through here. 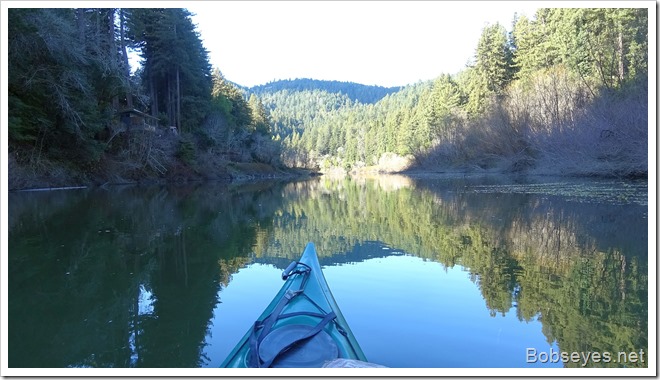 Nice day for a paddle eh. 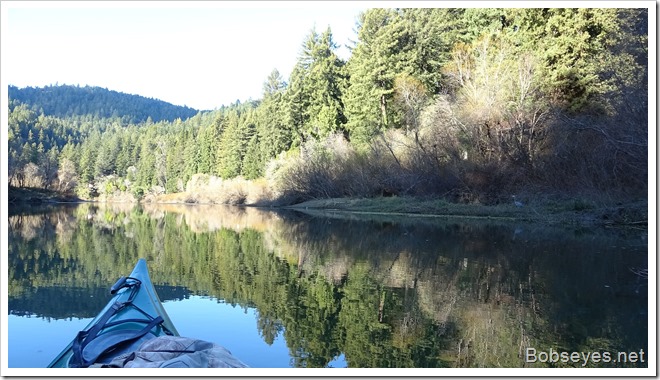 Just below here I was paddling on the right going through a shallow spot when I spooked some fish about 6 feet in front of me. A big wake formed and from experience I knew what it was. They’d been resting. Most of these fish here have just come in off the ocean only a few hours ago.

I made it to Villa Grande where I’d planned to sit and watch and take it easy for a bit. I could see a guy fishing down on the left side and wondered if it might be Andrew who lives here and fishes a lot. I hadn’t seen him in over a year so wasn’t sure he was alive. 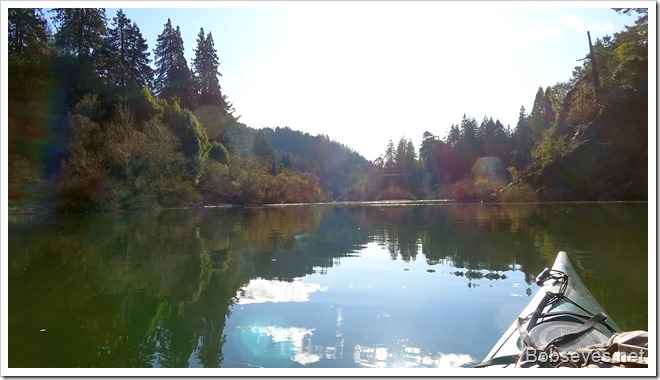 There’s Andrew fishing away and yes he is still alive. 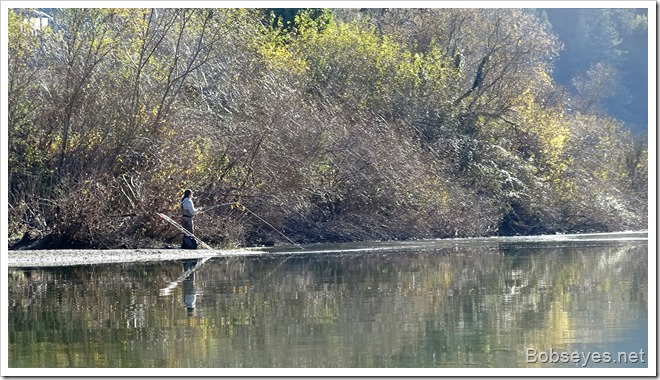 I paddled over by him and pulled in close enough to shoot the bull, looking up river. 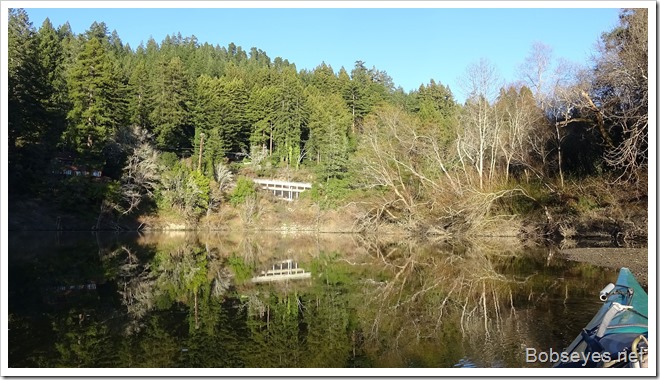 This is my spot as he fished we shot the bull for about an hour and a half. Every once in awhile Andrew would pop up and say there goes one meaning a big steelhead fish was swimming on by heading up the river to where the other guys were fishing. The fish he was seeing were going off to our right likely because they could hear us talking. I’d say he saw around 12 or so of them go by while I was there. Good news for the slot guys. 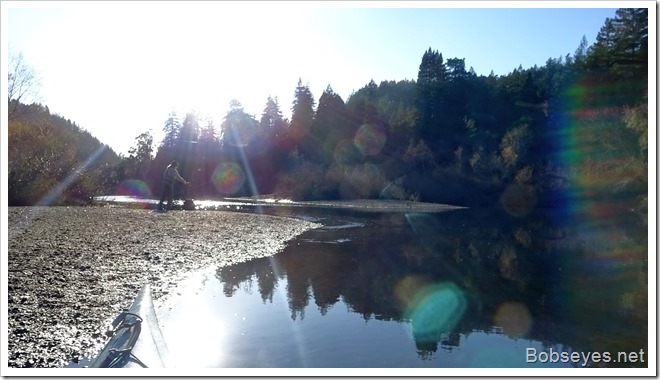 Paddle back up the river

Now that I knew Andrew was alive and got all the news from him I started my paddle back up the river. Monte Rio is up under that mountain as far as you can see, about a mile. 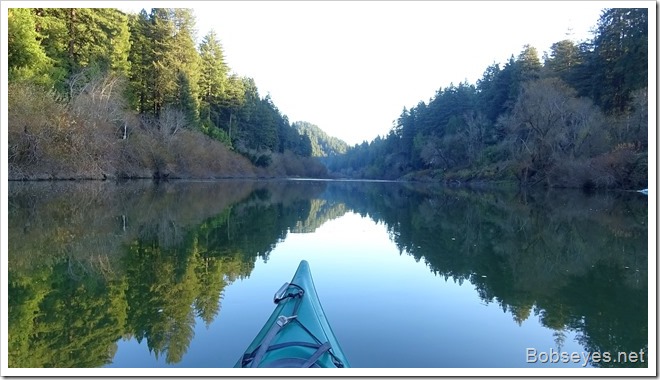 Here I’m coming up on the boats in the slot again. It’s late, after 4 so some of them have left for the day. 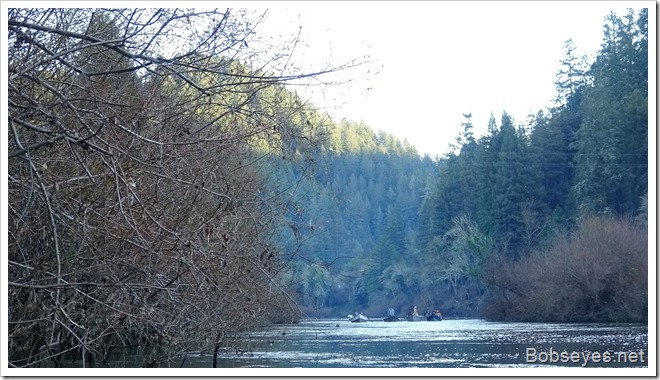 I pulled into my spot and gave them my fishing report on what I’d seen down below. It seems some of those fish got up to this spot as they had landed three keepers. You can only keep non native fish, the natives have to go back. 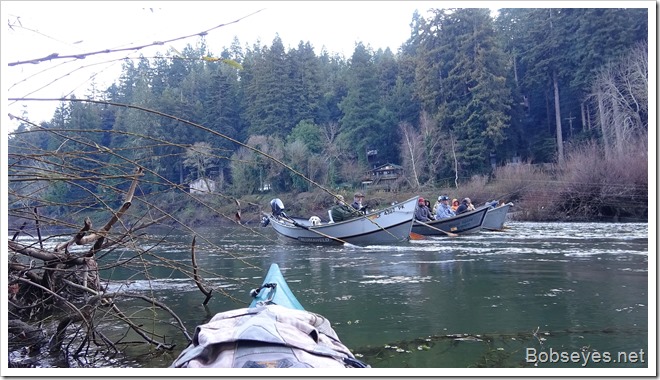 I left them and headed for the boat ramp. 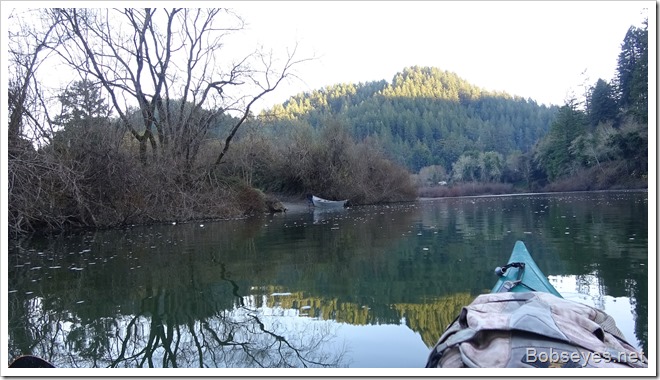 Just as I left I heard a WAWhooee and turned around to see one of the boats getting ready to land a fish, the one off to the right. But they put the net down without landing a fish. I heard a bit later that it was a native so it got turned loose. 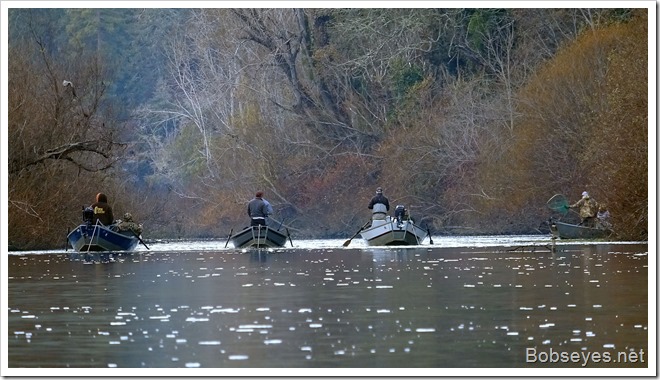 Here’s a guy taking his boat out after a hard day fishing. :O) 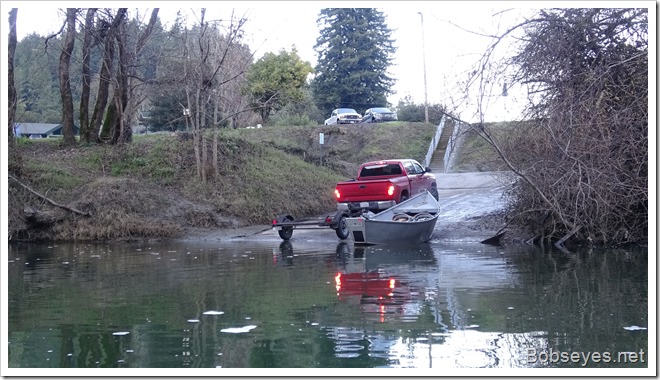 While I was getting my boat out one of the other boats pulled in and I found out the story of the fish-on that I just witnessed.

I drove on home and got there just before dark so I checked on the chickens and went in the house and that was my day.