I got corned a couple days ago which really interferes  with my sleep. Full body itch all night, yuck.

Anyway I was dragging my butt yesterday and felt like I had a bad hang over and I just couldn’t get it going. I was totally out of energy and walking to the next chair was work enough.

I did catch two mice in my bucket trap on the feed shed. I waited too long after they started coming into it and a bunch of them must of gotten full and left. But the trap is working good. All I have to do is see some mice entering the feed shed through my pipe and then go out and take the lid off the bucket of water. The only way out of the feed shed is through my pipe and into the bucket of water. Mice tend to like to get back to their nests by daybreak so they need to leave. And there isn’t any water in the feed shed so after eating all my feed they might be a bit thirsty so have to leave.

At any rate I  just remove the bucket lid and let them come out on their own which works better than me going into the feed shed and scaring them out.

I did get a little light stuff done. I needed to remove all the empty feed sacks from the feed shed as that’s where all the mice were hiding . I got them this far for now. They add up fast. The paper ones I will put in the mulch bin and let them mulch out and the plastic ones I’m not sure what I’ll do with them. Having some around is good as they are useful but in time they might take over the place if I don’t do something with them. 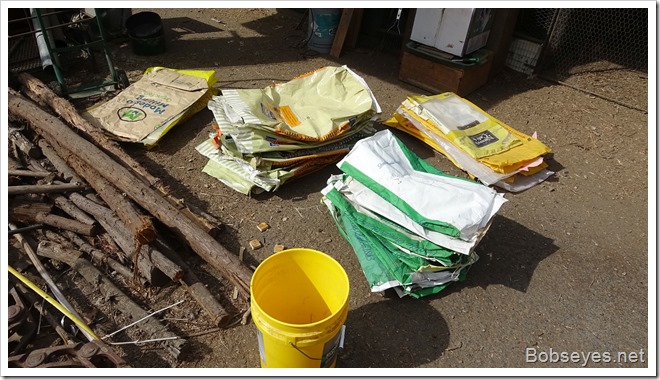 I was noticing my rooster Carmelo’s neck feathers were falling out so I guess he’s starting to molt which they do this time of year. Time to get a coat for the winter. 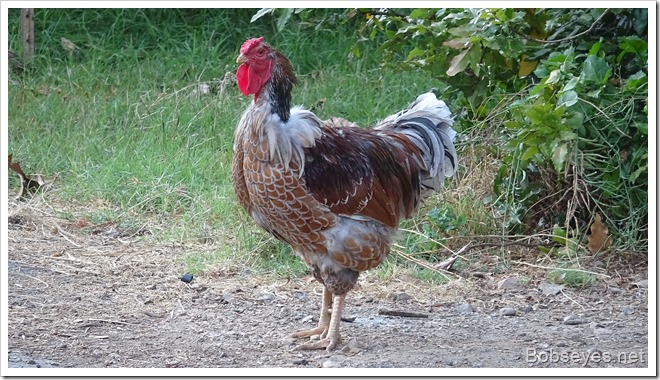 Tidying up the wood pile

I needed to tidy up last years wood in the wood pile so I can put this years wood in the pile and cover it up. This is all wood from the yard and the big trees that drop limbs around the yard. I use it  mostly for short fires in the wood stove in the fall and the spring or when the power goes out. 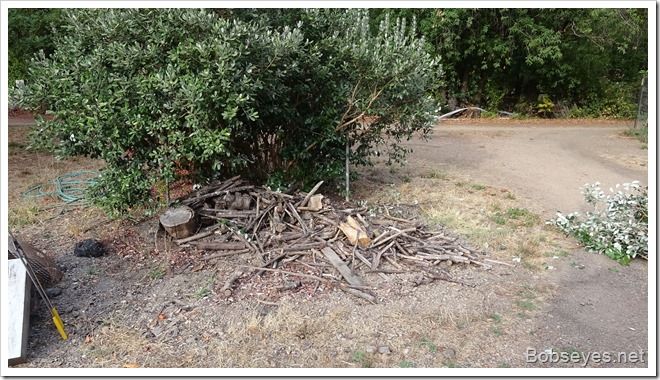 I trimmed the bush and moved the old wood into this row so I can add the new stuff on the left. 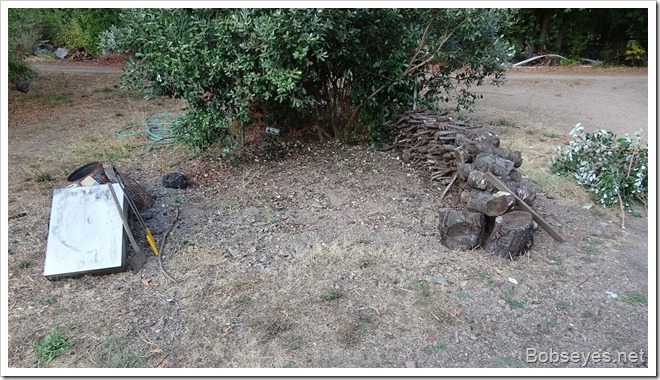 I thought the chickens would be in there digging for seeds and bugs but they didn’t come around so I thought I’d make it more inviting by putting some water on it which chickens like to dig in. 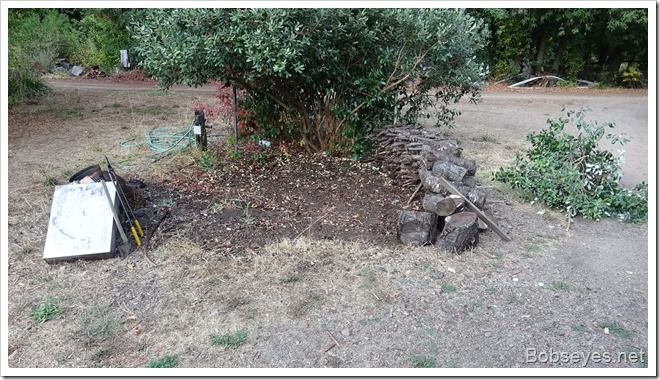 That did the trick. Makes for happy chickens. 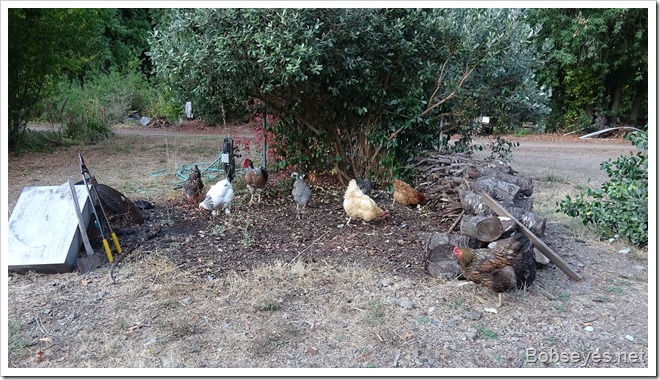 Late in the day I got a call from my dentist saying she wanted to see me about a tooth I’ve been having some problems with so we made an appointment for the next day.

Powers going to be shut down tomorrow

And them my brother who just came from Santa Rosa shopping says they are shutting down all the power in Santa Rosa tomorrow as a precaution for expected high winds.  That’s where we all shop around here. I called the places I needed to go and they didn’t know what was going on.

Later I found a map on the computer that said the places I needed to go were not getting the power shut down so I was good to go.

Catching up on sleep

And last night was another itchy corned night but I was able to finally get some sleep around 4 in the morning which caught me up enough to dump the hang over effect.

Yesterday I also got the van ready to roll as  my car was all apart. I headed to Santa Rosa to pick up the parts I need to fix the car this morning and then to the hardware store and then over to the cheese factory to pick up a couple pounds of cheese.

Here is the new feed storage container I purchased today to be used to store feed near the mulch pen which is outside so this should keep the feed nice and dry and safe from critters and the chickens as they get into everything. 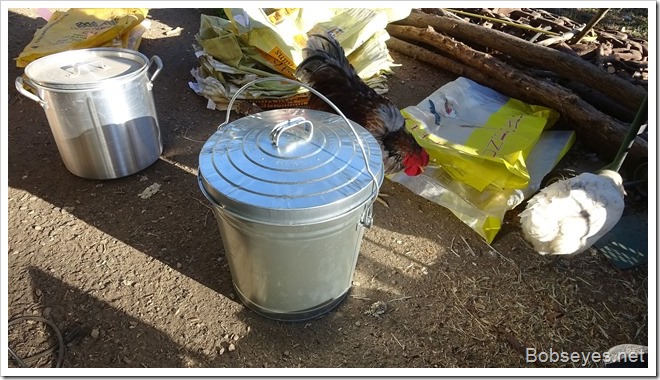 I headed home from there as my dentist is on the way and I had a 2 pm appointment. I always arrive early so I got in early today. I thought she was going to get on me for some work I had done in Mexico as that was the tooth she wanted to talk about. It turns out the work in Mexico was good but I had a rare thing which is a decaying gum down near the tooth’s roots, nothing they could of messed up in Mexico. I was happy to hear there was no problem with the work I had done in Mexico but not so happy about the decaying gum. She says we need to watch it with an x-ray every six months and when it gets bad enough the tooth will have to come out. Not really too good of news but things are what they are.

Best to rest up

I drove on home and thought the best thing I can do is continue to rest up so I can get it going again soon as I have stuff to do before the winter rains come.

Filled up the new feed storage can

So I took it easy for the rest of the day and did some chair hopping and a few little things like fill up the new metal feed storage can I bought today. It has a metal top and I plan to keep it out in my mulch pen so when I come check the chickens in the morning I can get feed from that instead of the feed shed which means I don’t have to walk through a bunch of squawking chickens excited about getting fed. The new can is critter proof and water proof and sorta like a metal garbage can but has a couple features for feed as it’s made for feed.

I also unloaded the two rolls of fence wire I purchased and put it away. 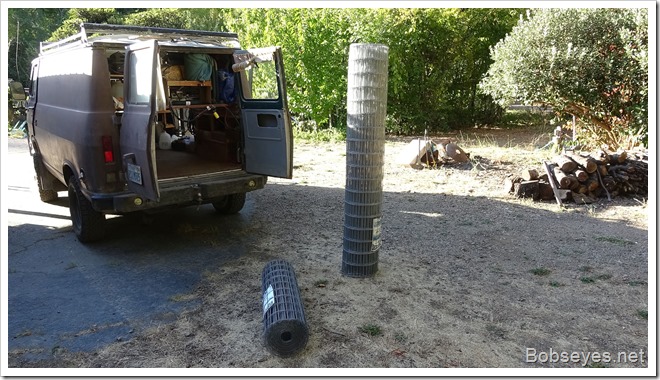 The rest of the day I just napped and did some chair hopping and napped some more.

Oh, the new mouse trap caught two more mice last night, working good. I have real smart mice and nothing else seems to work to catch them.

Nice day and now to get the wood stove going as the nights are starting to cool down a bit.