I better get a paddle in while I can

The weather guys changed their story today and dropped the wind down a bit so I decided I better get a yak in while I can.

I knew the river was high from the recent rains and real muddy too but the sun was out and the sky was blue so off I went.

Of course with these conditions I knew I’d be the only one on the water and I was except for the wildlife.

Putting the boat in the water

I put my boat in the water and headed up the river just a little as I knew when I crossed the river it would take me back down a bit because the current was fairly strong right now but not as strong as it would be when the high tide changed to the low tide which it was just about to do.

I paddled across the river to the side of Penny Island and went by this pair of golden eyed ducks. 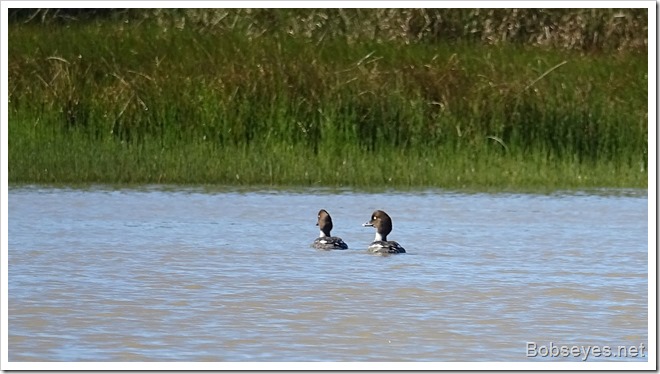 I wasn’t sure which way I wanted to go today down or up the river so I decided to paddle down along Penny Island to it’s lower end and make up my mind.

I stopped here along the island for a bit before continuing on down along the edge. 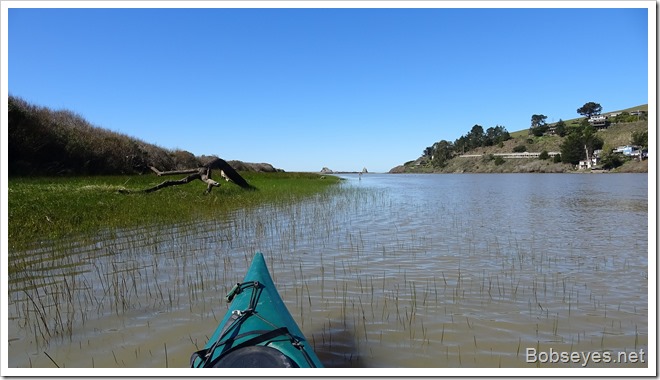 From the island I could see the river’s open mouth down there. 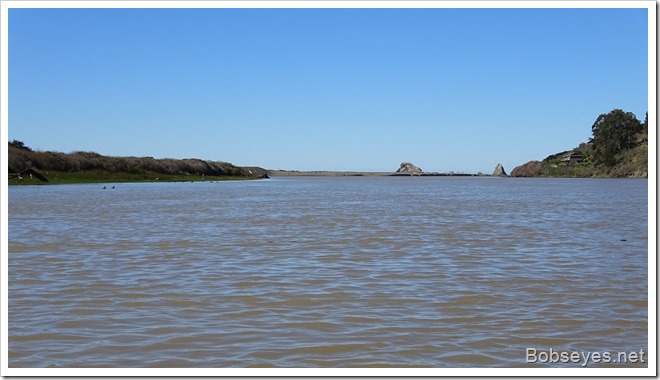 It was wide open with a lot of big waves coming in and the tide was changing to low so I knew the current was going to pick up soon so I just looked. 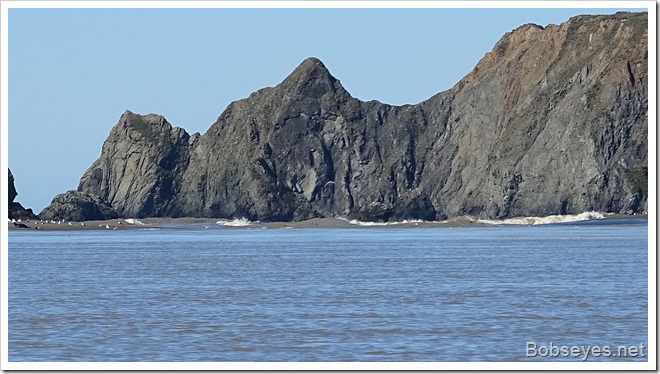 I rounded the bottom end of Penny Island and paddled into this spot I call the Slot and rested for a bit. The Slot is a drain for a fresh water swamp just in back of me, that’s why the water is brown. 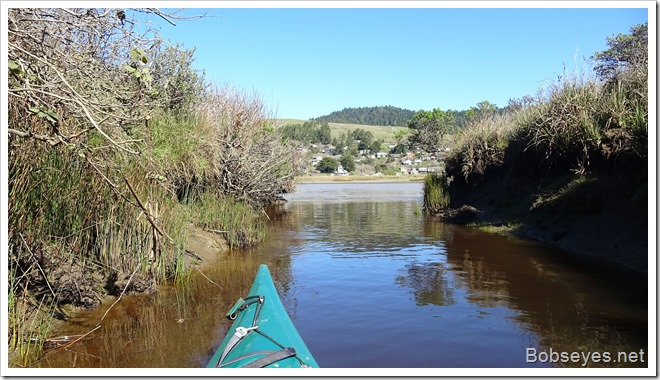 Eventually I continued on up the back channel of the island.

At the top end of Penny Island I spotted this dock that had flouted down river from somewhere up the river. I was thinking John S.  might like some of that good wood. He’s coming down tomorrow yakking so I don’t have to tell him about it. 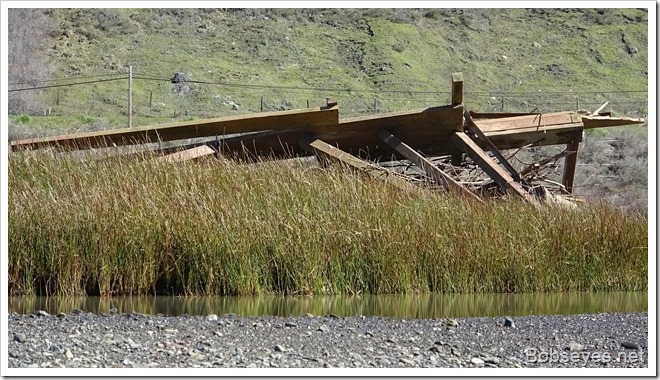 I paddled off the top end of Penny Island into some current so I pulled in behind this submerged log for a break as the log pulls the boat into it in the back so it’s a good spot to stop for a bit especially when the current is as strong as it is. 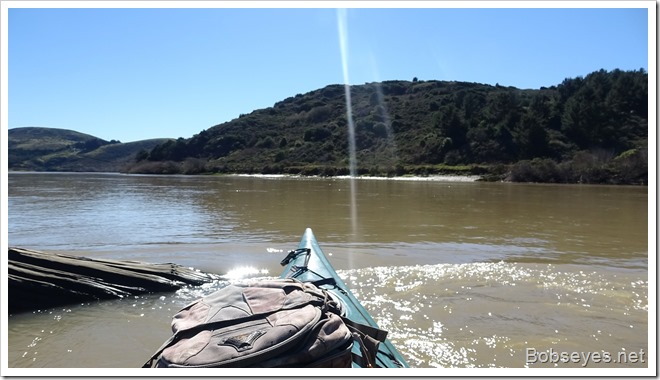 I continued on up the river along it’s south edge and stopped here at eagle’s landing for a bit checking out the current coming around the end of the rock. It may not look like much but it’s flowing fairly fast and would take my boat down the river if I went out in it very far so the plan is to hug the rock close and skirt around the rock and stay out of the strong current. I was thinking of maybe not going around it and playing it safe, but what the heck I’ve been around it before. 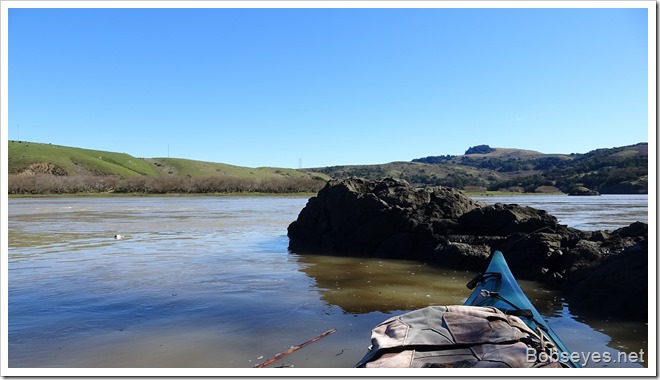 If it’s done right it’s no problem but if I was to get out in the current too far the current would take me down the river and that’s not where I wanted to go right now. Not a big deal though.

Staying along the river’s edge

I  made it around the rock and had clear sailing now so I paddled up along here taking it easy. As long as I stay on the edge their isn’t much current. 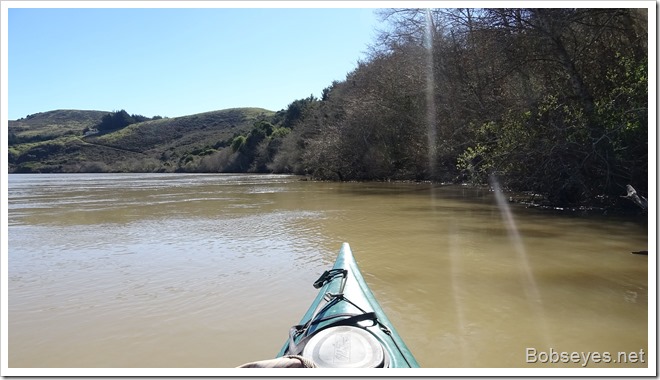 I made it up to here which I call Muskrat where I stopped for a break for a bit just looking around. 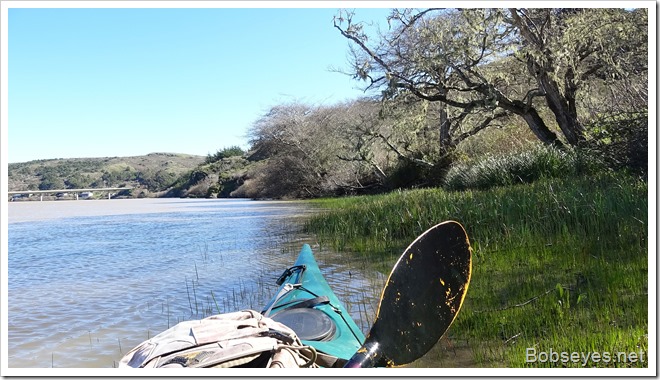 I could hear the cows mooing up on the hill top from that spot and knew it was the feed truck coming to feed from the type of moos but I couldn’t see the truck or the cows doing all the mooing.

Put the boat into a drift

I moved my boat into the current which had picked up some by now as it was almost low tide. So all I had to do was drift down the river now but I wanted to cross it some so I kept paddling a bit to make it near the other side. 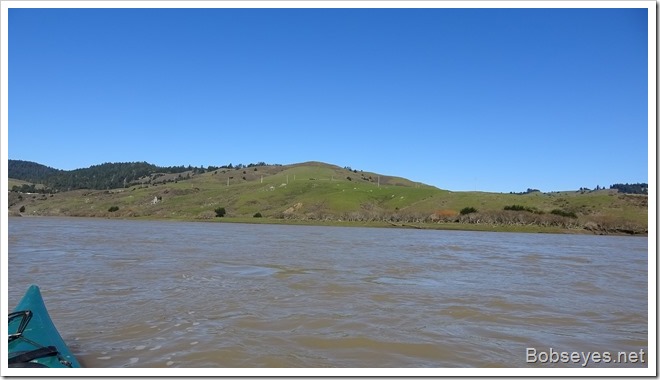 There were a few cormorants on the gravel below Paddy’s Rock. The water is fairly chocolate right now so I’m sure they aren’t doing well fishing in the river. If the river was clear there’d be about a thousand of them here right now eating the small fish coming down from the hatcheries but with the muddy water the fish are mostly safe. 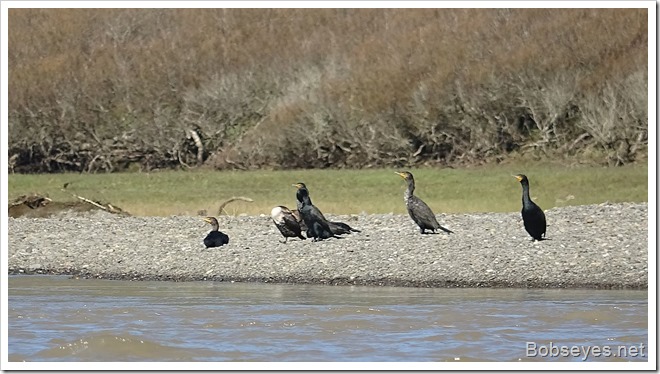 There’s the cows being fed

Now I was far enough down the river I could see the feed truck and the cows up on the ridge top. 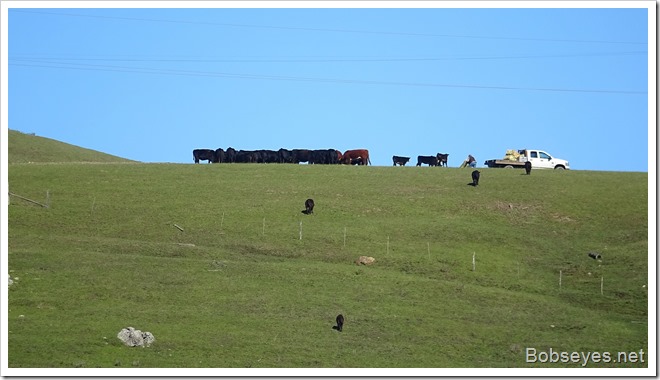 The wind was picking up to around 20 miles an hour now so the weather guys were wrong, again. But I can handle that.

I drifted by these mallard ducks which were mostly just resting along the river’s edge. 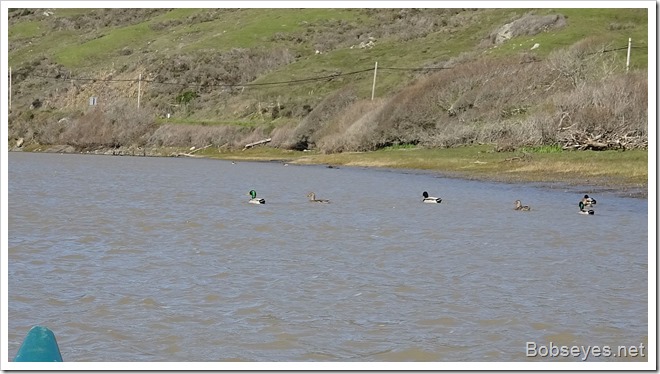 These geese honked at me as I passed on by. 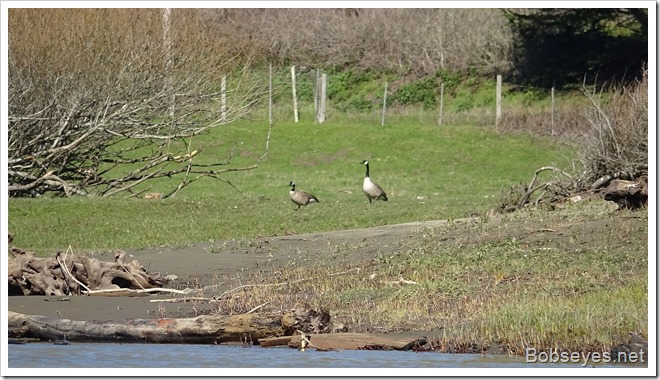 Wind and the current

Now I was out in the current drifting along fairly fast with a strong wind blowing  in my face. The current was stronger than the wind so I kept drifting on down the river.

Chocolate water but no matter what the color the yakking is the same. I’m headed back to the boat ramp at Jenner up ahead. 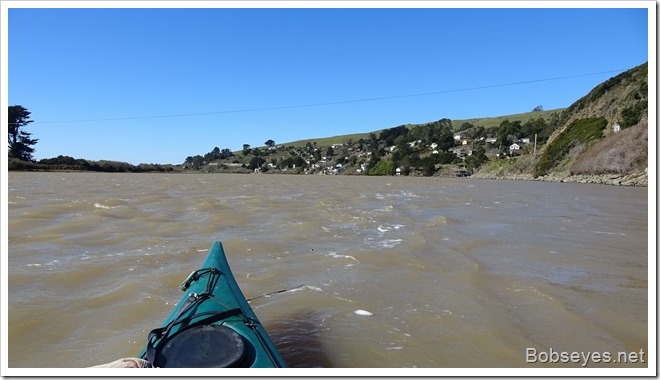 Just above the mud

I pulled into the boat ramp and was thankful the water wasn’t any lower than it was as there was about six inches of mud just under the water at the boat ramp bottom and I was just able to get over the top of it.

I loaded my boat and went on home for the day.

Too nippy so I started a fire

When I got home a nap was in order and then a cup of coffee. I went outside to get some stuff done but it was a bit nippy so I mostly just sat around until almost dark when I lite a fire and burned all the papers from my filing cabinet. As things were burning I was thinking good, that’s a load off my mind that I will no longer have to deal with. I mean all the papers I burned are now gone and out of mind. I likely burned something I may need some day but I don’t really give a hoot. :O)

That was my day for a nice one. Good to get out for a yak before taking off on my trip.