There’s some big nests in some trees down at Jenner I’ve seen up in the trees but I’ve never known what used them and if they are even still used as they look real old. They are six or more feet across and clustered up in some thick trees.

So I was thinking today would be a good day to go for a yak and a hike to see if I could learn some more stuff about those big nests.

I put in around 1 I think it was and headed up stream about a half mile as that’s where I had to go to see the big nests.

That big rock just above center on the top of the hill is where I need to hike to as the big nests are in the trees just below the big rock and to the left a bit. 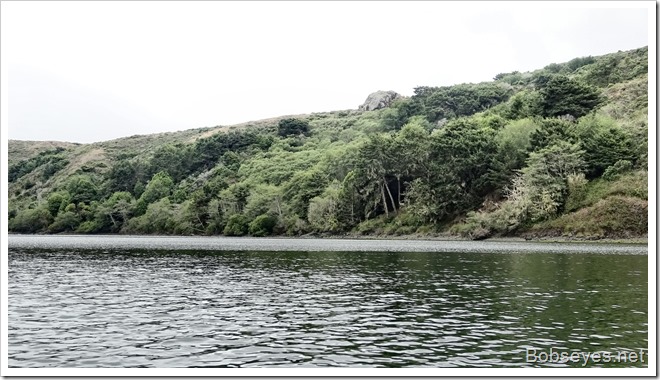 But first I saw some big birds just up ahead so I paddled over to check them out.

I paddled by these geese resting on the shore. 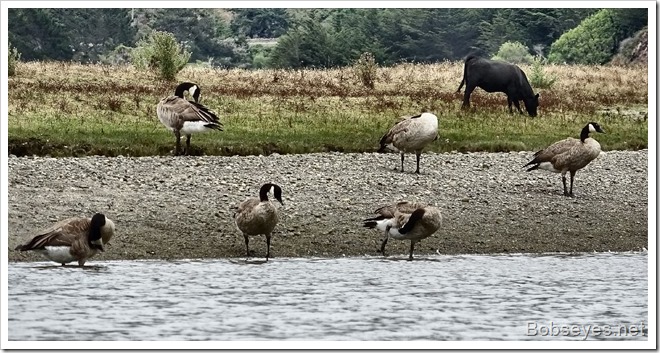 And I could see these white pelicans up ahead so I paddled over to them.

Pelicans are interesting birds. The white ones are in here eating Ditch weed as they seem to like it a lot, but right now they are resting and doing some preening. 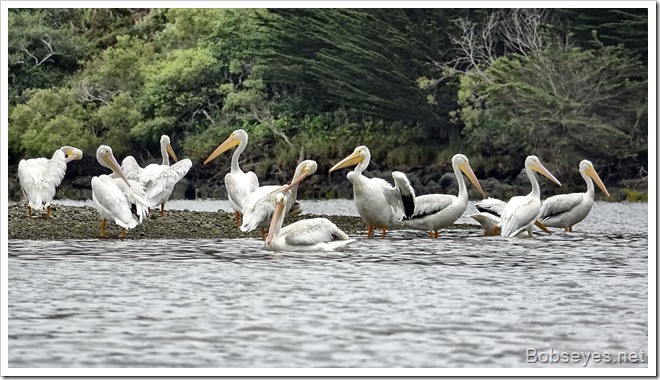 From there I crossed the river to this spot I call Muskrat for a sit. The big rock is up on the hill in front of me so I need to get over to the trail that goes up the hill to it. 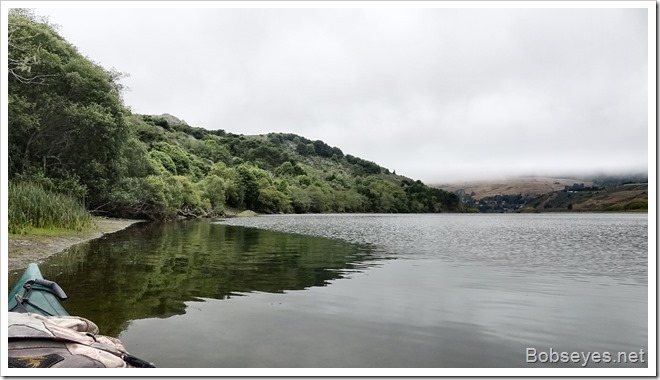 I moved down to this spot and sat for a bit with my eyes closed. I heard something splash behind me. 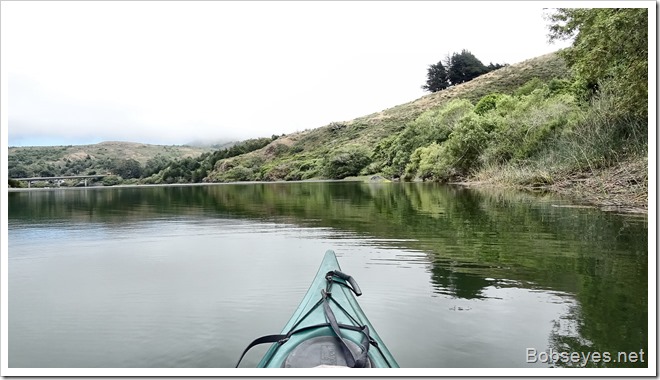 It turned out these four river otters were sneaking around me, or trying to anyway. 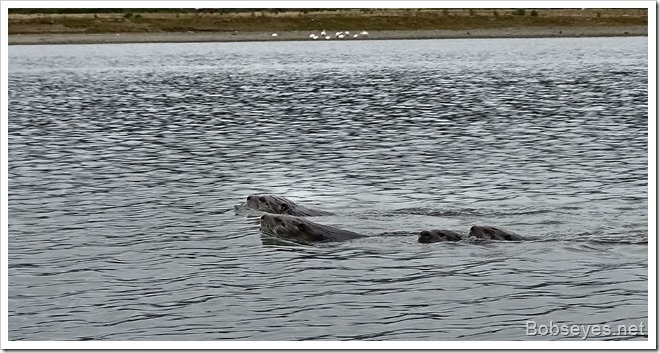 I followed them as they were going in the direction I wanted to go to the trailhead. 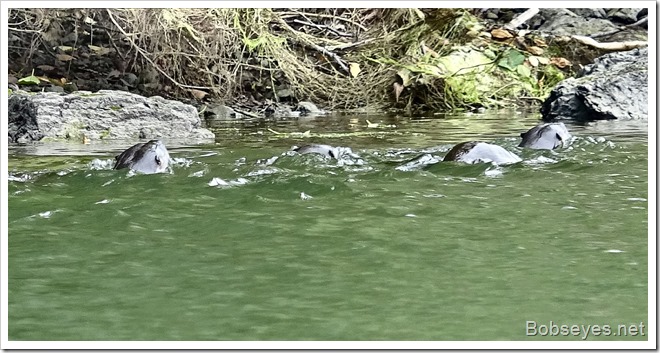 The otters continued on down the river feeding along the way. I let them go as I needed to pull in here to the trailhead to the big rock which goes pretty much straight up the hill from here through a lot of brush and poison oak which I don’t get. 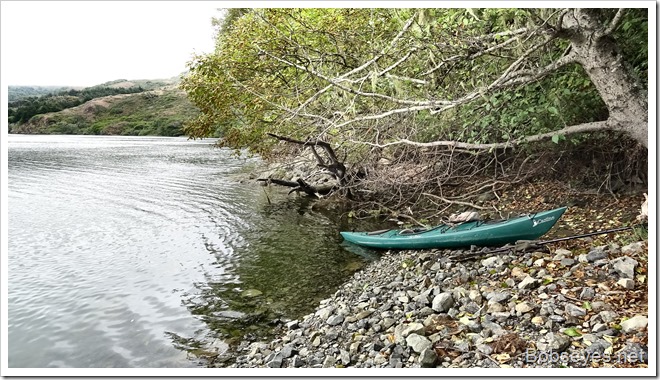 The trail goes through some nice lush areas and one has to know pretty  much where it is to use it as it’s mostly a deer trail. 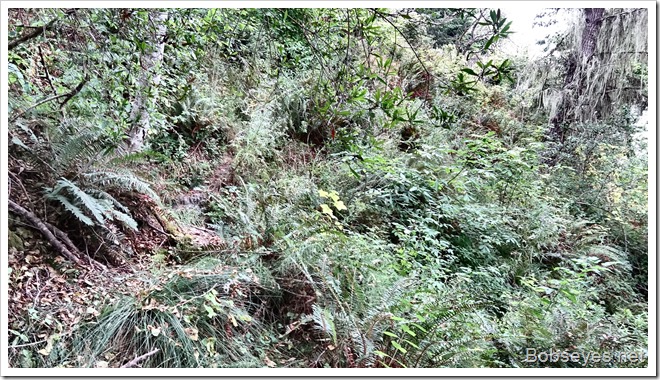 I made it up to the big rock and sat down to enjoy the view for a bit. 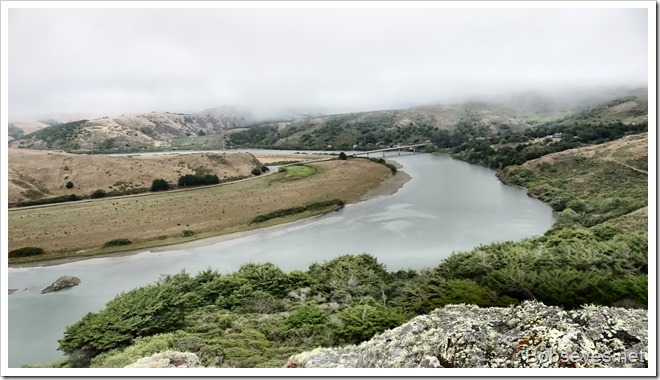 I could see down to where the pelicans were. Some brown pelicans have joined the white pelicans. 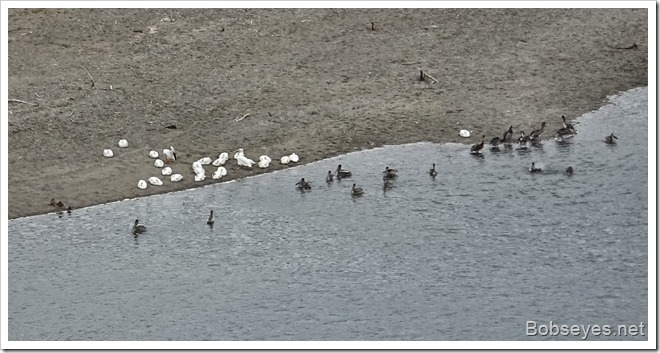 No vultures in the nest this year

There’s a turkey vulture nest on one side of the big rock that I know about so I went around the rock to see if the nest was used this year. They nest in the crack in the big rock in the ferns, but there was no sign that they used the nest this year. They just lay two eggs on the ground in the nest area and don’t really build anything and then the young birds hop around in the ferns until they are big enough to fly. 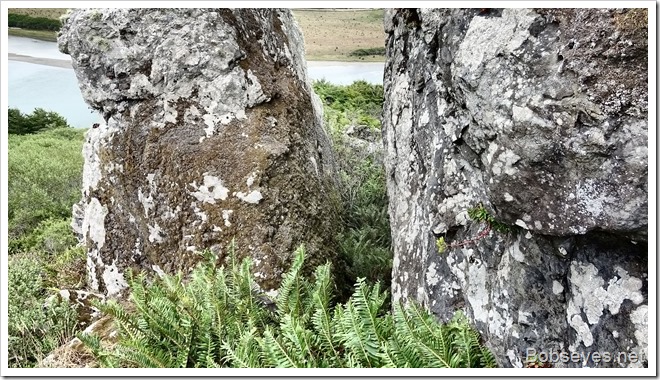 Headed for the unknown big nests

After resting up on the big rock and enjoying the day for a bit I started on down going a different way then the way I came up to go by the big nests up in the trees I wanted to check out.

The nests are down in these big tees where a trail goes. 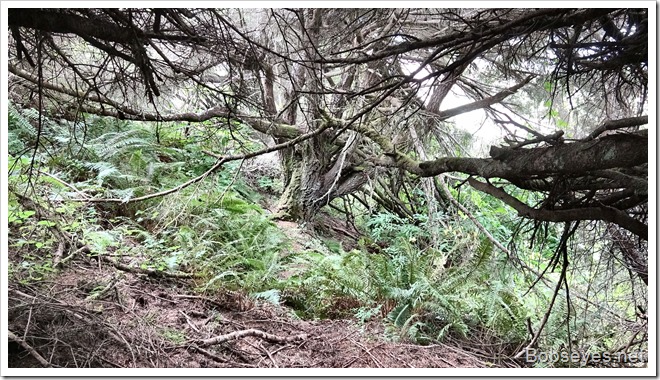 As I approached the first nest I was fortunate to see just what type of bird was using these nests as one flew out. It was a Barn owl.

I climbed the tree a bit to check out the nest. There was no nest on top of the nest. This nest is about 6 feet across and others are larger. 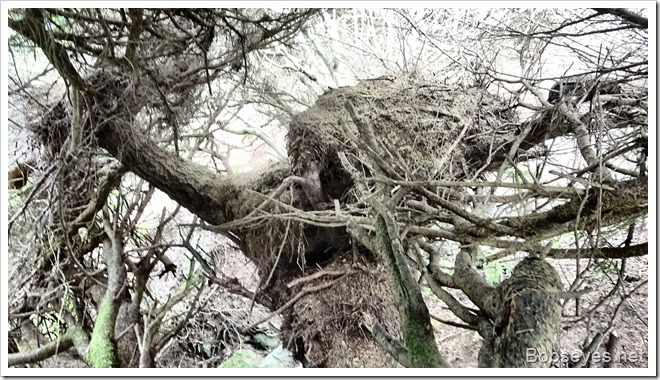 And it appears they go into this hole in the bottom . Barn owls are cavity nesters. They like holes in things but I didn’t know they made nests in trees like this. I’d always thought they use rocks and caves and barns to nest. 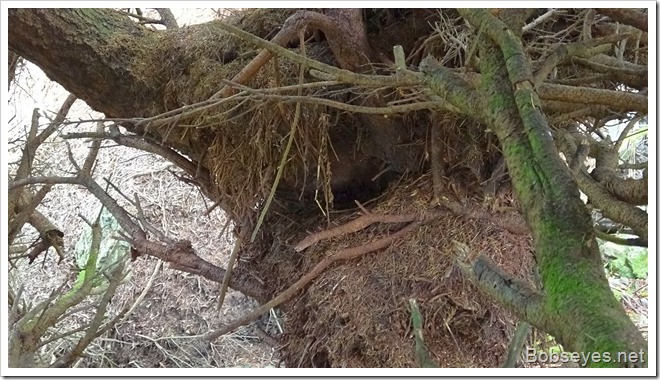 I tried to check out some of the other nests as there are 6 or 10 or so of them but all the other ones were too high for me to be climbing in those trees.

I headed on down the hill and rested by the river for a bit before getting back in my boat and heading back to the Jenner boat ramp. 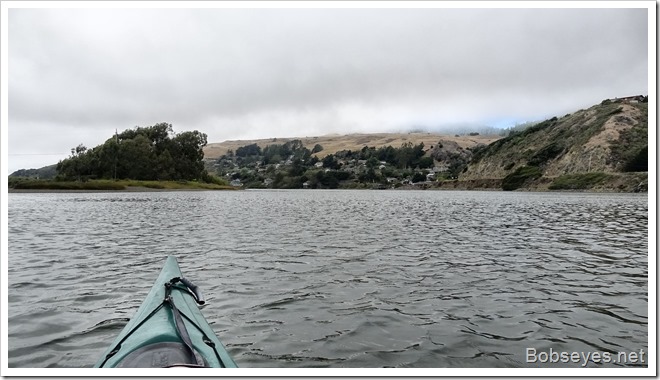 I put the boat on the car and drove on home worn out and ready for a nap.

That was my day for a real nice one yakking and hiking and discovering.