We had some thunder and lightning here last night with some light rain showers. I forgot and didn’t cover up the fruit I’m trying to dry and it got a little wet. I hope it’s ok and doesn’t spoil or the chickens will get it.

After getting it going I decided to ride up into Armstrong Redwood State Park which my land adjoins so it’s right next door. The purpose was to visit the old hermit that lives in back of the park behind a couple gates.

Here’s the first gate which I had to enter a combination to pass. 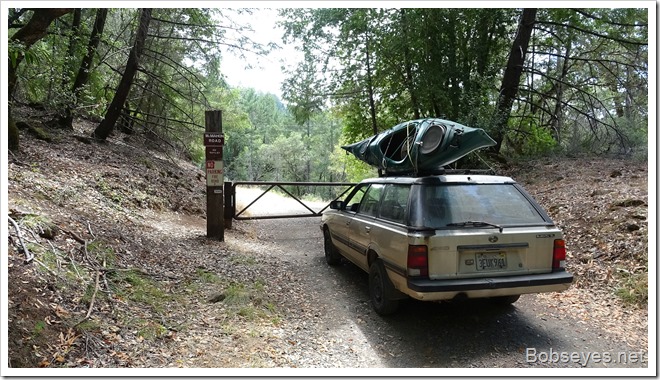 Just as I was going through that gate about 8 good looking young ladies came walking down the road and were real friendly. They were out for a walk in the park and were all very physically fit. I sorta got my ol batteries charged. :O)

I continued up the road through these redwood trees and across the bridge that has a nice creek under it. 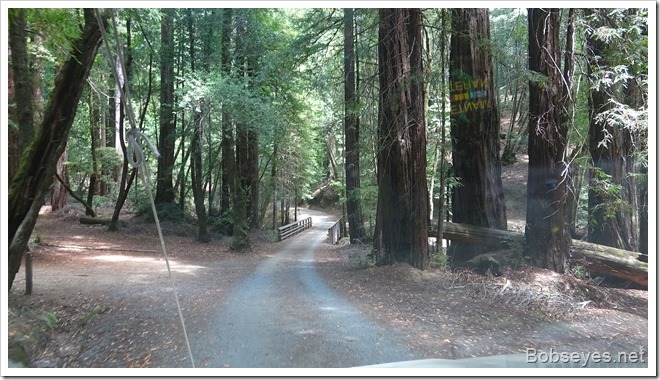 Shortly I came to another gate, the one  that lets you into his property. 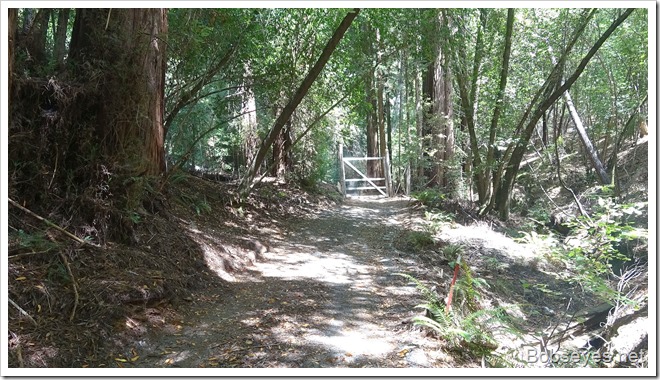 I parked the car and had to walk up to his house. 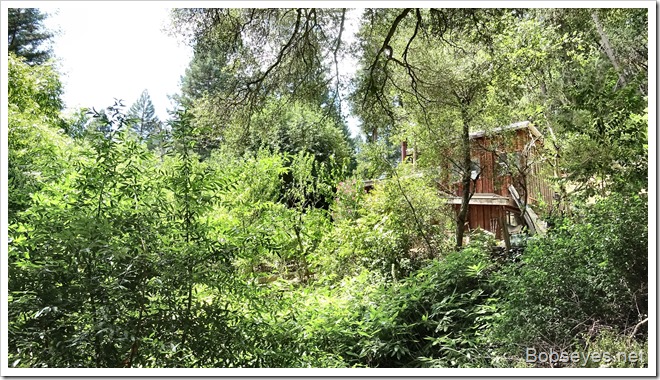 This is actually his front door but it’s not the one he uses. I think he’s about 90 so stuff is stacking up on him but when you get that old there’s a lot of stuff that just doesn’t matter anymore. 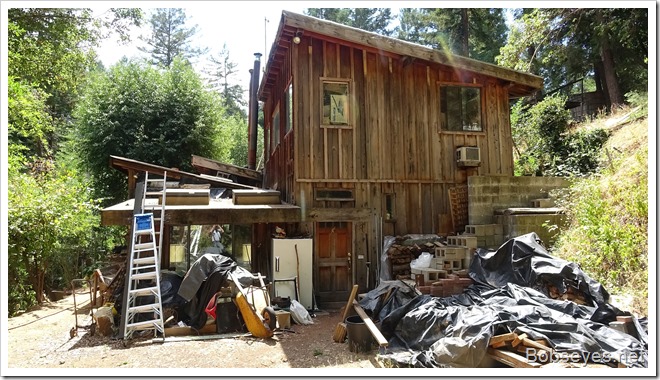 He uses these sliding doors to get in and out of his house. 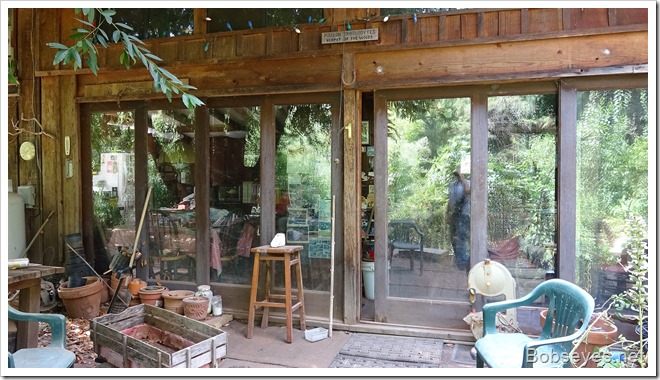 And you ring this bell to get his attention. He wasn’t home so I shouted for him and he answered down by the creek. 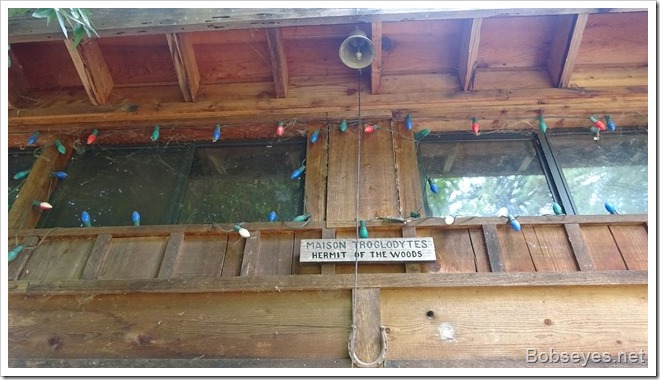 I found him doing his best to pack two buckets of water up to his house. Apparently his springs had just gone dry on him for the year.

I packed the buckets of water up to his house for him and he told me his story of no water. He wanted to go to town to get a couple cases of bottled water so I told him to get ready to go. Once he was ready I asked if he had his wallet and his mask. Mask? He went back in the house and got it.

I took him down the hill to the Guerneville Safeway. He’s pretty hunched over. I had him go in and get his water and waited in the car as the store was pretty busy. He also bought a big water melon. 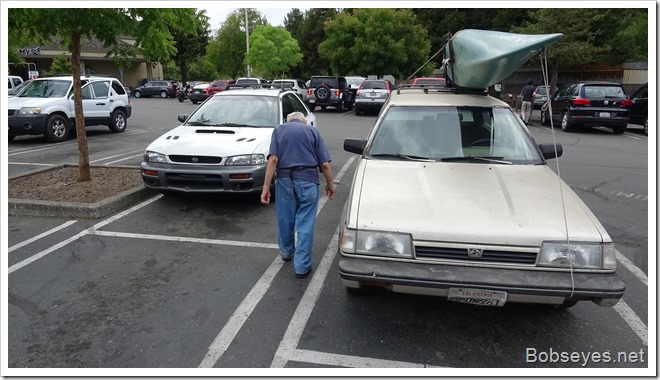 Once back at his house I said I was going to hike up the hill above his house and check out his springs to see what’s going on with the water.

He said ok and he’d have a nice slice of water melon for me when I got back down the hill.

There wasn’t much of a trail and it was steep as I started off here going up the hill. 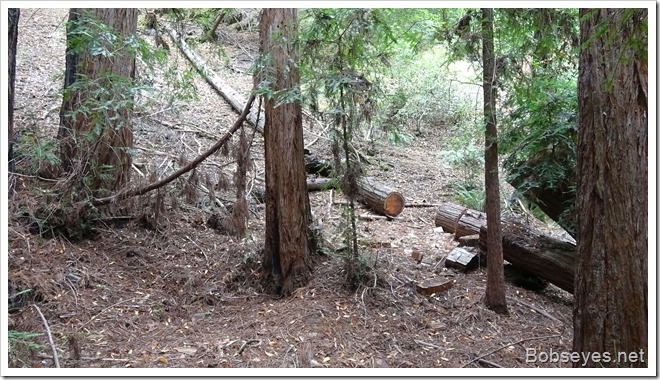 And that may not look like it but I went straight up the hill from here, very steep and I had to go slow as the dry dirt was very slippery. I really used some different muscles on this hike and I’ll feel them tonight for sure. 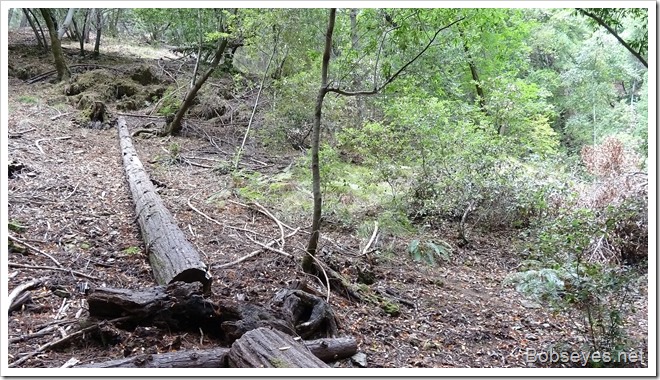 I got to his springs and found the water was low and the intake screens were partly plugged up so I worked on them a bit but without any tools I could only get a little water flowing. 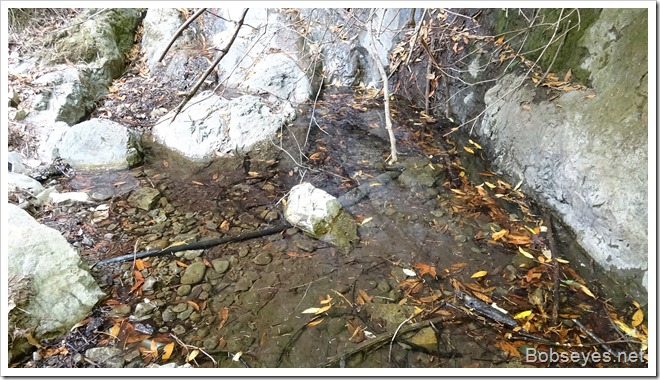 On another spring I was able to take the pipe apart here and get the water flowing. I then hooked the pipe back up. 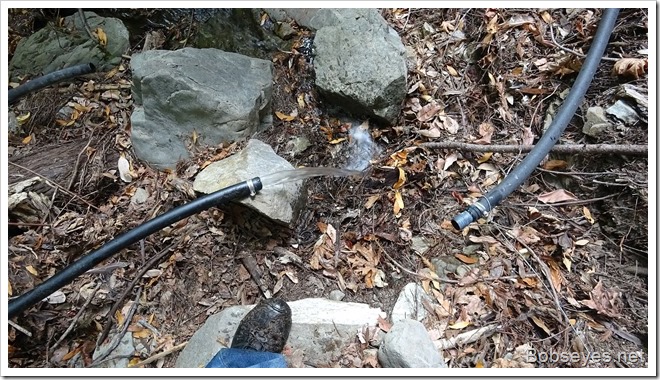 I followed the water pipe down the hill checking for problems.

At this spot just above his house I found this wet spot where the water pipe had pulled apart at a pipe connection. It was a very steep spot and I had to be very careful about sliding down the hill but I was able to get it connected back up so water would flow. 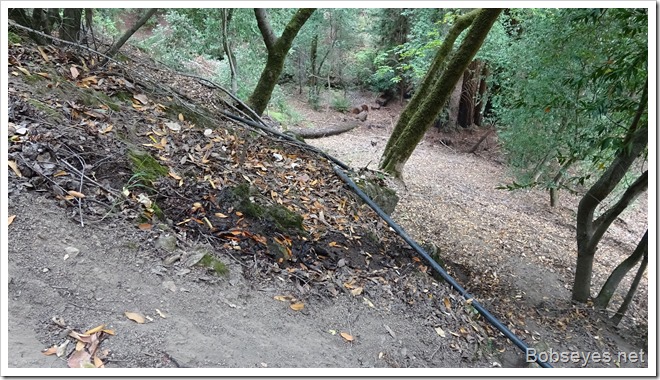 I made it down to  his garden and was walking through it when I ran into this two foot long snake. It was a rattle snake but didn’t rattle. I let it crawl back into the bushes and continued on to the house. They are good to have around as they eat mice and rats and such. 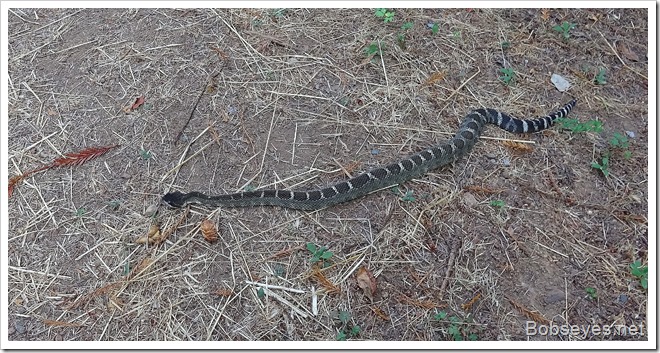 I gave Nathan my report and he cut me up a slice of melon which really hit the spot. 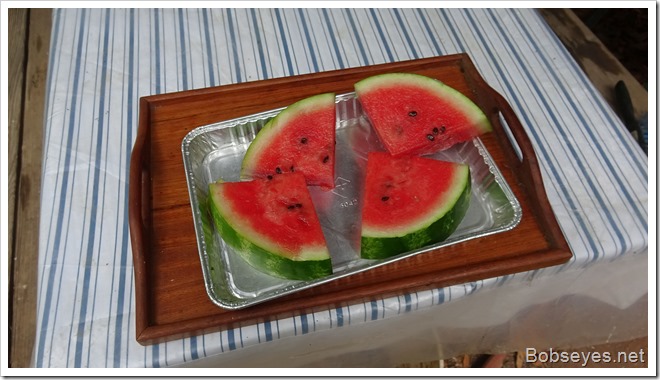 Went on home tired out

We chatted for a bit and my muscles where letting me know I’d over used them and then I went on home and checked on my chickens.

The chickens didn’t like the thunder and lightning last night as they only gave a couple eggs today. That’s ok as they’ll make up for it tomorrow with lots of eggs.

Needless to a say I was pretty beat with lots o sore muscles so I did some chair hopping and just took it easy for the rest of the day with a nap or two in there too.

Nice day. I had a nice visit and got more exercise than I needed.