A Very Rough Ocean While Paddling Around Jenner After the Storm

Last night around nine the power guy showed up to restore the power to our houses. One of those big tree limbs must of knocked a fuse loose so he proceeded to replace the fuse.

My brother Tom recognized the power company guy as a guy he had talked with before about fishing in the ocean so they had quite the bull session while he did the work. 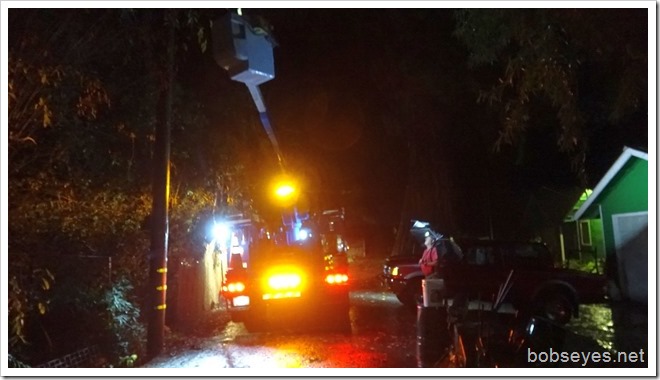 Now we had power but no phone or internet for me with the phone line down.  The phone line is still out at this time tonight for some reason.

Today I decided to go on down to Jenner for a paddle as with all the rain the river came up fast so lots of stuff got sucked down the river that people didn’t take care of like boats and boards and docks and such besides all natures stuff.

Not knowing the condition of the mouth I drove down to the ocean overlook just past the town of Jenner.

To my surprise the ocean was really ripping, rougher than I’ve ever seen it before. The waves were huge and breaking over the sandy beaches all the way across the beach. I’ll have to be careful about kayaking around that. 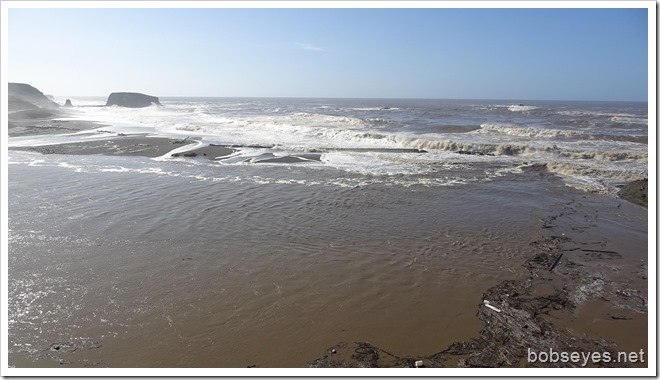 To rough for me

I could see a lot of debris at the end of the river floating in the water. It’s too rough down there for me to yak in that area today. 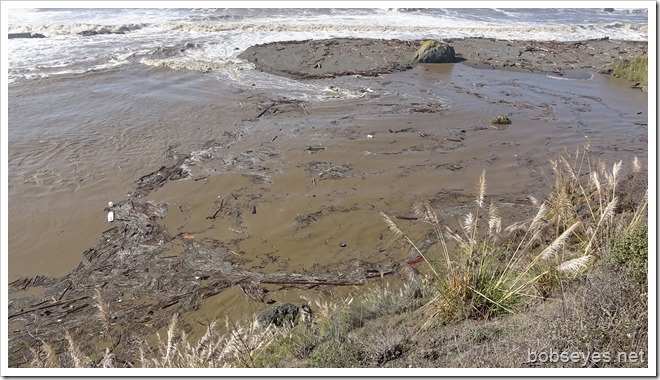 At the boat ramp

I drove on back to the boat launch where one could see the river  had flooded here yesterday a bit and put all this wood on the boat ramp. 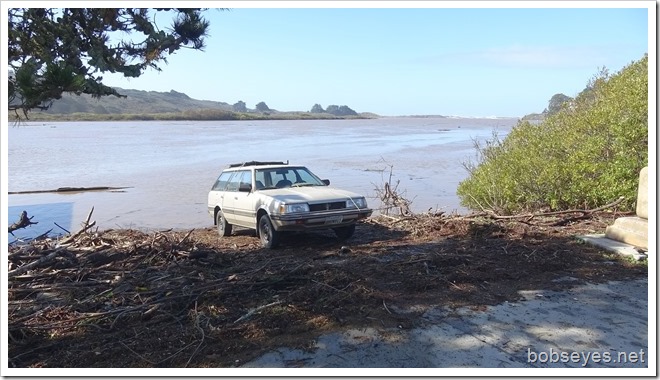 There was quite a bit of water coming down the river with the current being a bit faster than normal but do-able.

I put in and headed up the river and over to Penny Island so I could paddle up along it’s edge. 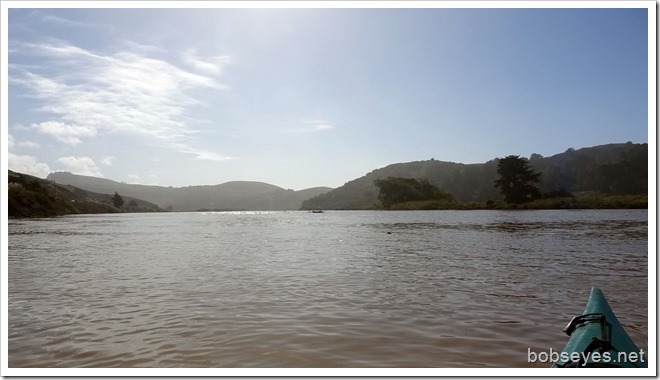 There’s a water channel on the upper end of the island I paddled into to stop and watch things for awhile at this point. 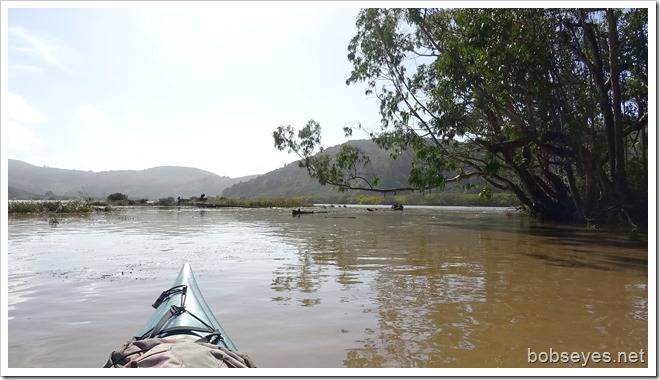 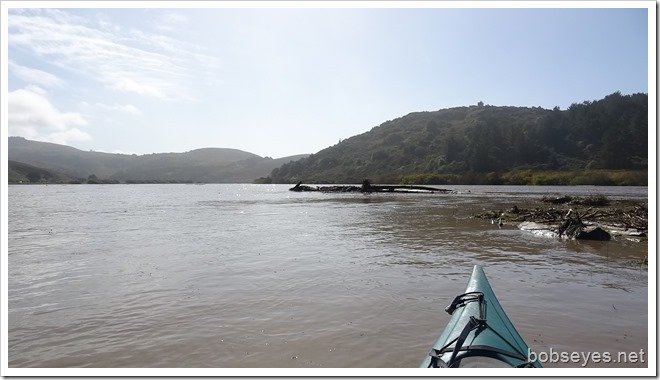 I made it as far as Eagle’s Landing as that was far enough to check stuff out. 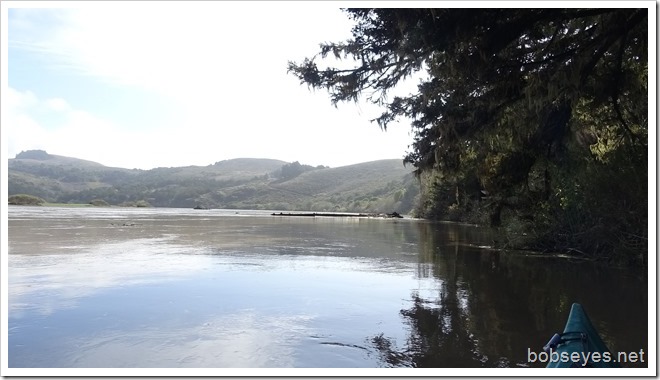 Things going down the river

There was lots of wood debris coming down the river and a good number of boat type stuff too and parts of docks. 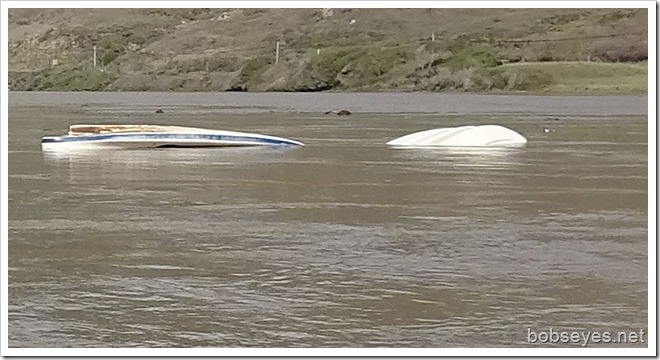 In the old days I would of salvaged some boats but I have all I need and no energy to do that anymore.

Looking up the river I could just barely see some guys dong something up above me. Seems they were trying to recover this dock which might have been theirs and they were trying to keep it from going down the river any further. I left and don’t’ know if they had any luck as when I saw them they were slowly loosing the battle. 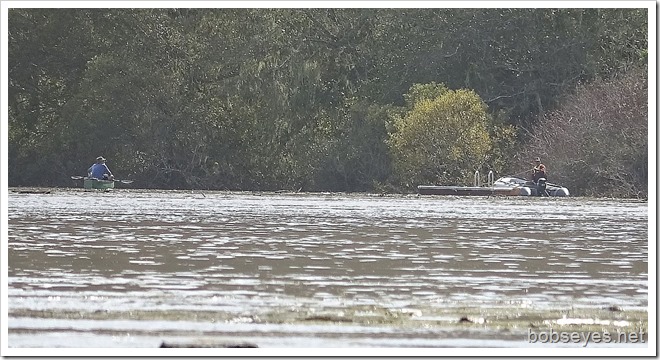 Down river to the mouth area

After a good sit there I turned my boat into the current and headed down river towards the mouth area to check things out carefully. 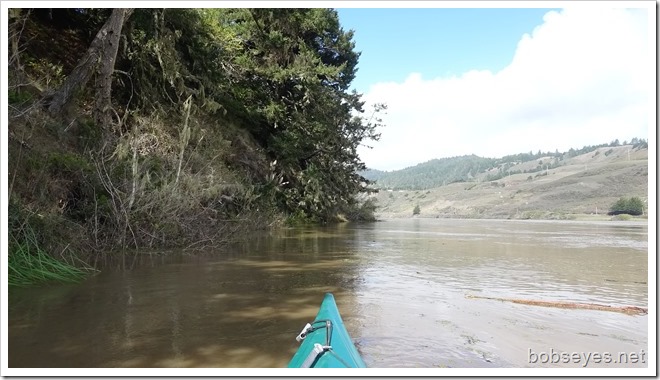 Wave surges, too dangerous for me

It didn’t take long for me to reach the mouth area where I could see the ocean was too rough for me to get too close to the sandy beaches so I stayed back here. I thought I could paddle around that point on the right and I did but I was quickly sorry when I ran into four foot wave surges from the ocean that the water quickly moved up and down four feet or so in and out which wasn’t  safe for me so I turned tail and got out of there quick. 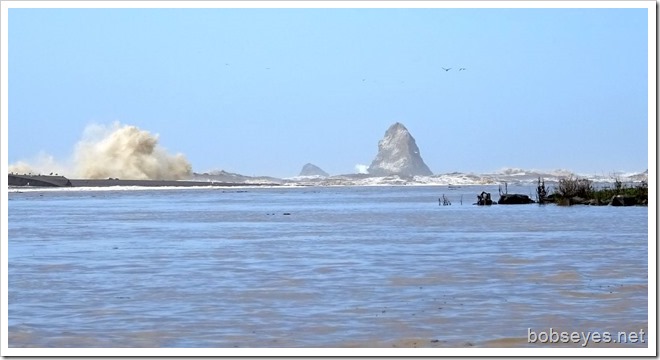 I paddled back out to the bottom end of Penny Island where the brown pelicans were hanging out as the sandy beaches were too rough for them too. 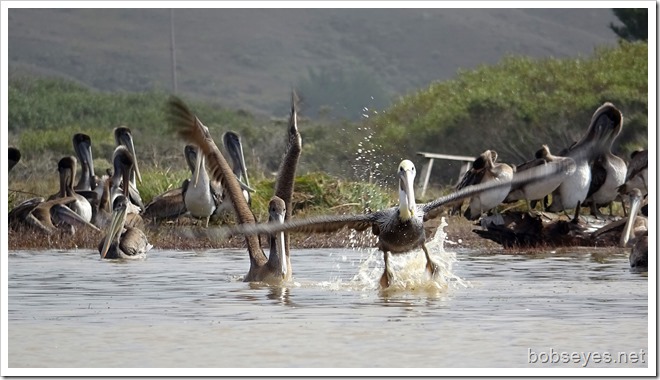 I paddled by this group of them resting on the end of the island. 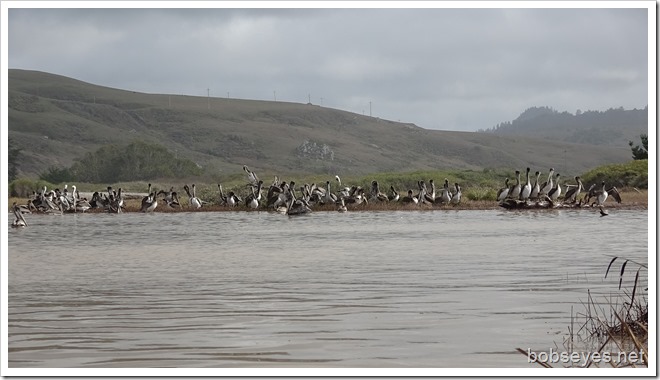 And by these ones too before heading to the boat ramp for the day. 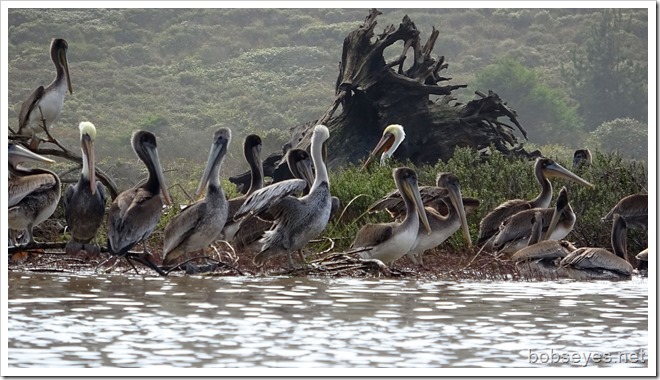 At the boat ramp I pulled my boat out of the water and got it loaded up and tied down.

There was a big plastic barrel at the boat ramp that someone had taken out of the water from a dock. They are used to flout docks and get loose. I had a use for one so I salvaged it and went on home for the day.

Nap time and some work

After a nap I went outside and moved some dirt and mulch to the avocado trees for a couple of ours until it started to get dark.

I was hoping the phone guy would come by to fix my phone line but he never showed up yet.

I spent the last part of the day chair hopping around the yard and enjoying the evening.