A Paddle, Steelhead Fishermen and Video Making From My Kayak

It seemed like a good day to go on down to Monte Rio and put my kayak in the water. The sun was out and the wind was down so it should be a nice winter day.

I put my boat in the water at the boat ramp below the bridge and headed  out. 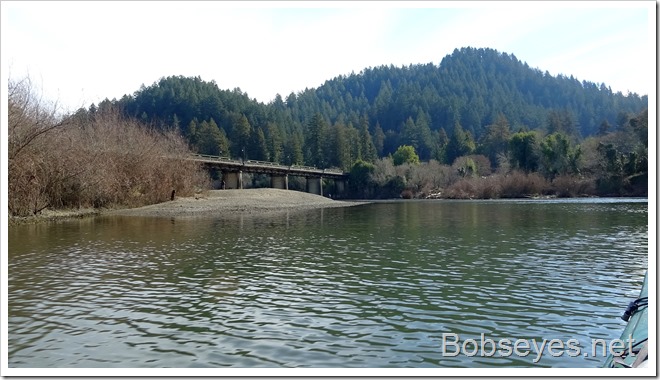 I turned to look down river and decided to head that way, so off I went mostly drifting in the current at a leisurely pace. 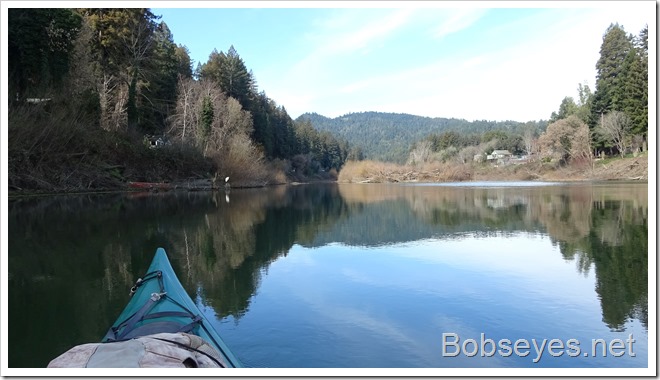 There was only one guy steelhead fishing in the shot so I stopped to chat for a bit. His name was Ben, I think, and we shot the bull for a bit. He wasn’t having much luck fishing but it was such a nice day to be on the river, that’s what counts. 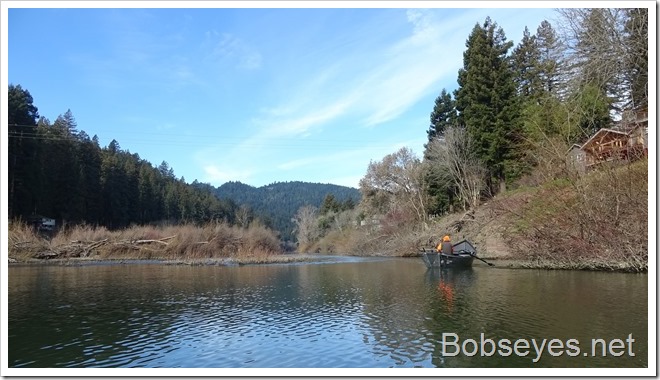 I left him fishing and continued my drift on down the river. 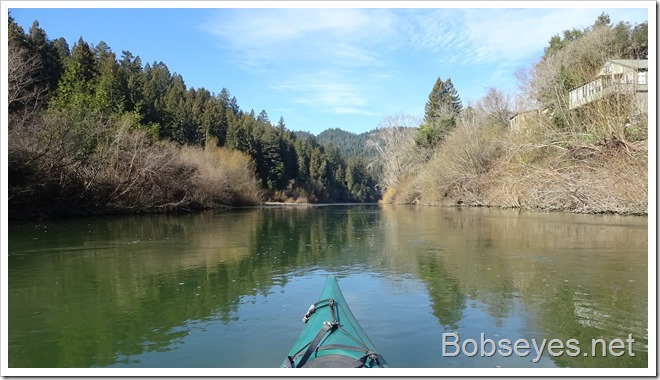 I’d been thinking about getting into videos for YouTube, so have been trying to set up for doing them from my kayak.

I needed a cam mount so had ordered one and it came in so I was trying it out a bit. It clamps on my yak and the camera screws onto it. I plan to give it a test out today to see how it performs. 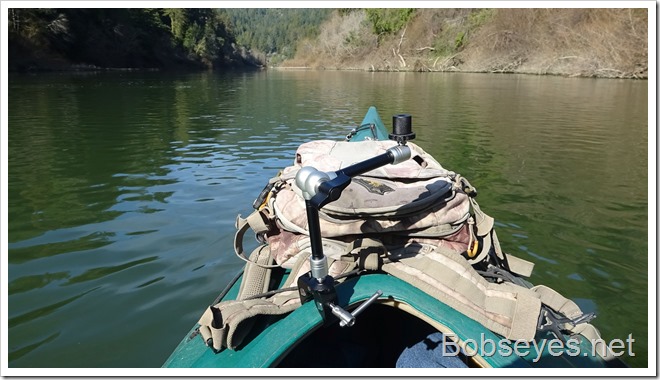 I’ll test the mount out later but now I continued down the river when this great blue heron took off with a squawk. 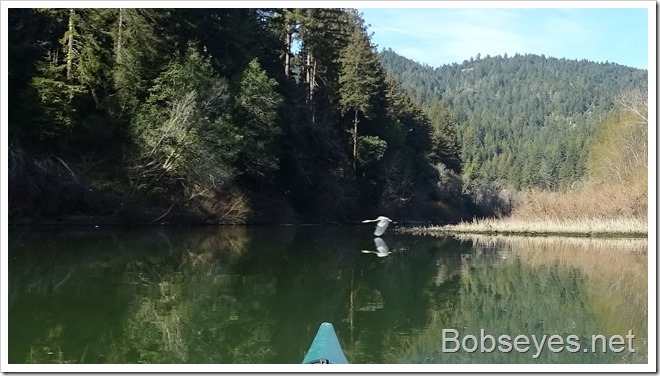 I pulled into the Villa Grande area, less then a mile below Monte Rio and sat for a good while taking it easy and playing with  my video camera mount. I also wanted to practice making videos for YouTube so I worked on making one about taking videos from a kayak.

I gave some thought on what I wanted to say on a video of the video camera mount and making my first video for YouTube. At first I was too concerned about what and how to say stuff and trying to make sure I covered what I wanted.

And I was concerned about all the noises on the river interfering with my video,…………….But.

I did Take one ok, but it didn’t just flow. It actually turned out pretty good for a first time.

After considering Take one, I realized I needed to lighten up a bit. Screw the sounds and everything else,  just relax and try it and it seemed to work a bit better.

I realized if I wanted to do this, I would  have to do it sorta like I do my blog. I take pictures and what you see is what you get.

You see what I see

So for the videos it’s going to be, what you see and hear is what you get, the same as what I see and hear as that’s the way it is. :O)

I worked on that from this sitting spot looking back up the river where I’ll head up in a few minutes. 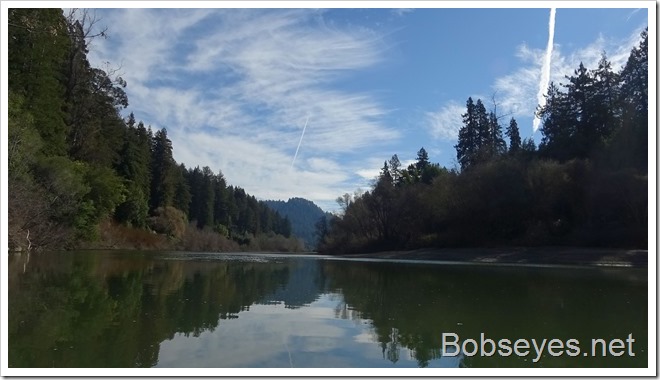 Testing the mount out

I wasn’t going to, but I needed to try out the new mount with the video camera while paddling up the river so I concentrated on that. I found the video cam to be a bit heavy for the mount and it leaned a bit but it did work, so good enough for now. I really need another microphone, so I  had ordered a lapel one that I’m waiting to come in, so I can give it a try to see if I can improve the sound.

As  I left the Villa Grande hole and started back up the river I saw a steelhead fisherman fishing on the right side. It turned out to be Andrew ,a guy I know that lives down there who I hadn’t seen for a good while.

As I was approaching he said there were some steelhead out in front of him but he couldn’t hook one.

He also said he hooked a large one last week that took off up stream then down stream then got caught in some brush so he cut his line. That’s a big rush for steelhead fishermen when they do that and it’s part of the steelhead fishing draw that keeps fishermen coming back to fish for them.

Eventually I took off up stream again practicing with my new video cam mount now and then.

Geno’s at the Slot

When I approached the Slot just below Monte Rio I could see another boat anchored there which turned out to be Geno F. Jr. and his friend Mike.

Geno is an old timer so we shot the bull for quite some time mostly about old times.

We were talking here when Geno says, darn one got by me as he saw a steelhead just up river of his boat. He’s looking up river in this picture, but his fishing line is down river were the steelhead are coming from as they come up the river from the ocean when they want to spawn. 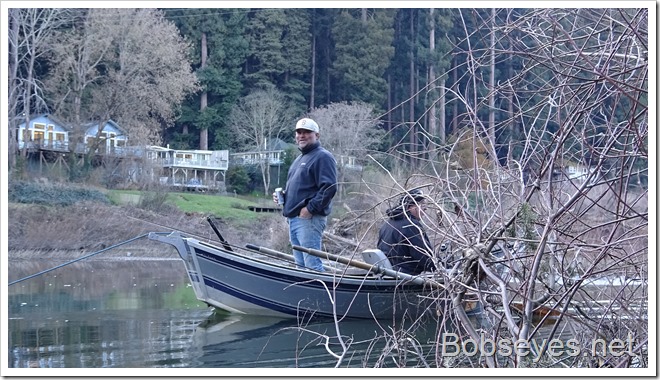 I continued on up the river the short distance to the Monte Rio boat ramp, just up ahead. 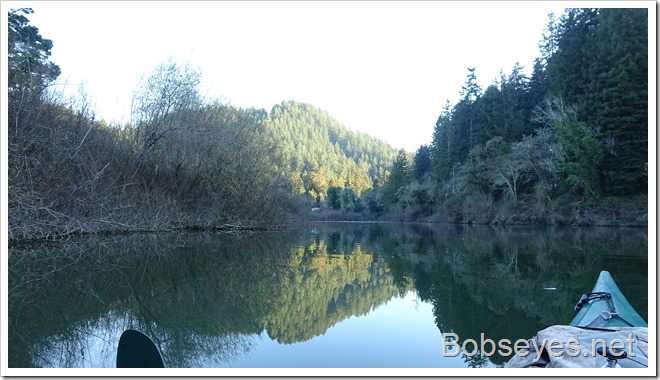 Here’s me pulling into the boat ramp at Monte Rio. 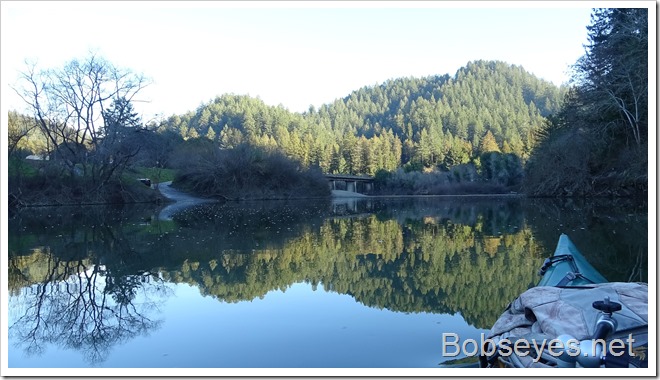 I landed at the ramp and went on home for the day.

There was only enough time left in the day to do some chair hopping with my chickens as they grazed around the yard. 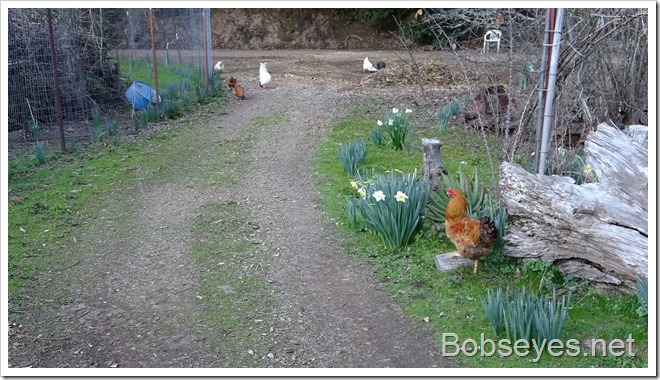 I let them into this pen where the grass was higher and they grazed away. 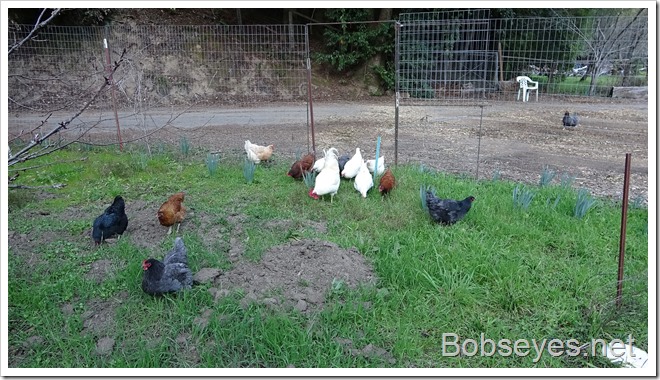