A Paddle At Jenner, and Catching Steelhead At Monte Rio

Starting out the year right

I thought I’d start off the new year right so I jumped in my car and headed for Jenner to do some kayaking as the wind was also down and the sun was out. Perfect way to start the new year.

I put the boat in the water and after some thought I headed down towards the mouth area to see what was going on, headed this way. That’s a seal out there but it didn’t have a fish. 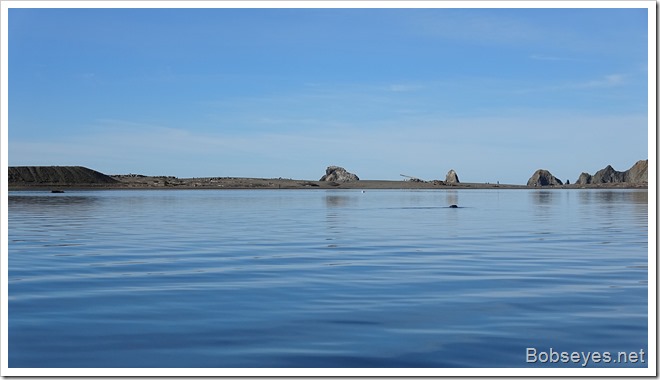 As I paddled along I could see some action over at John’s house so I paddled over to see what was going on and to talk with John a bit as he lives down here and sees what’s going on. 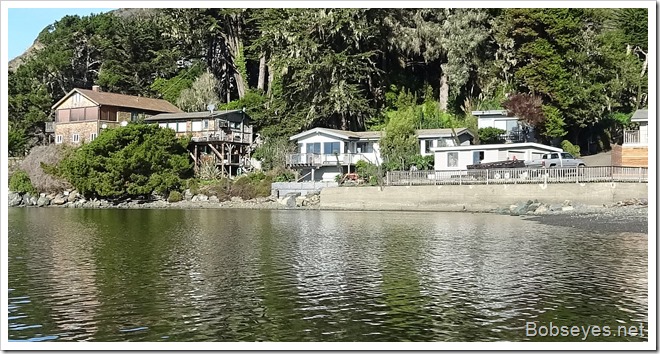 Big fish coming into the river to spawn

He was getting some help moving some rocks out of his yard so we shot the bull for a bit. John says there’s a big fish right by me in the shallows. Sure enough there was a big steelhead fish resting there in the water. They try to hide in the shallows from the seals and sea lions. 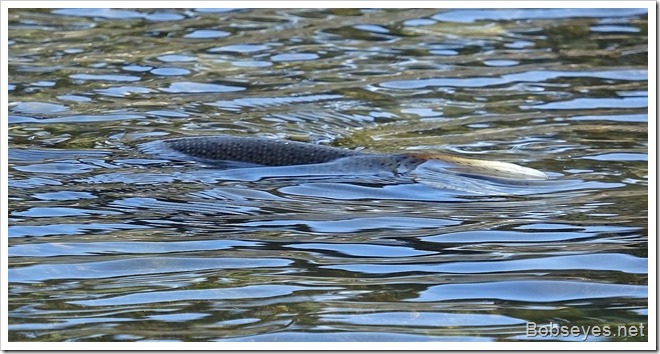 John said there were lots of steelhead coming into the river the last couple of days. He said lots of fish by the cement wall and the seals were attacking them when the tide was a bit higher than it was now. It was real shallow as it was going to low tide. John says the seals would chase the fish right up to the cement wall to catch them to eat. He said yesterday the seals just caught a big fish and then a big sea lion came in and took it away from them. If you watch the sea lions for a bit it’s easy to see why they got the name of sea lion. They are quite a bit larger than the harbor seals and move around in the water very aggressively.

Shortly the big steely took off to the right as we watched and it was gone. 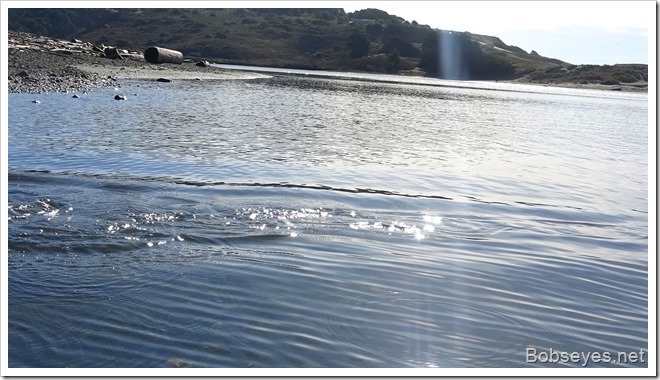 I met and talked with Loraine another local

John took off with this lady’s husband to delivery the rocks at his property up the coast. I chatted with Loraine for quite a while about things that go on down here as she lives up on the hill in Jenner. 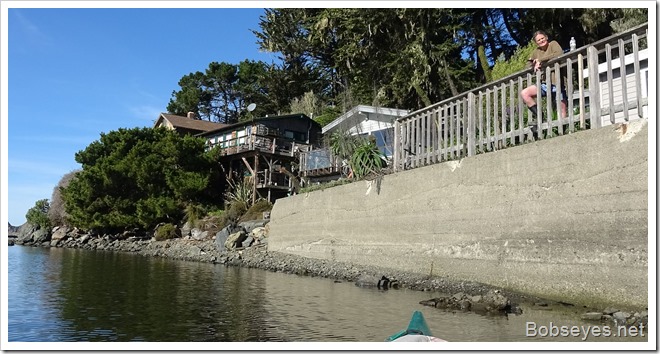 Another local guy David drove up in his car so we shot the bull with him a bit too.

With the tide going out I was starting to hit bottom with my boat so I had to get out of there while I could so I left and headed over here to the river’s open mouth. 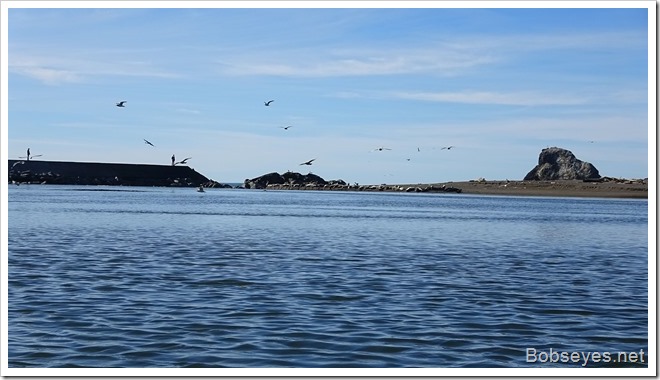 There’s lots of harbor seals resting on the shore line on the right side of the open mouth. Some think the harbor seals don’t eat much fish. Bull. 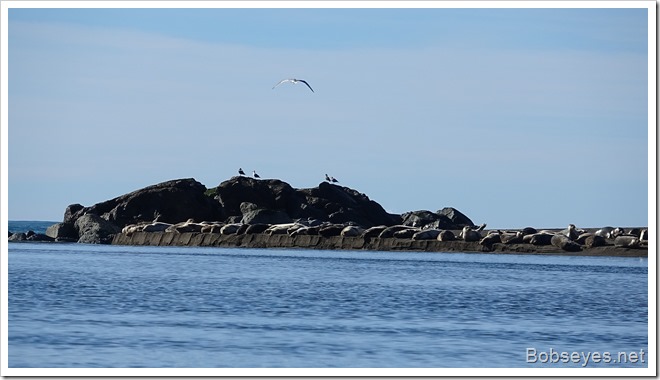 That’s what seals are born to do, eat fish and they do a lot.

I left the mouth area and headed on back up the river going by this sea lion fishing away. I saw a pack of about 6 of them in the estuary. They come into the estuary when big fish are running up the river to spawn. 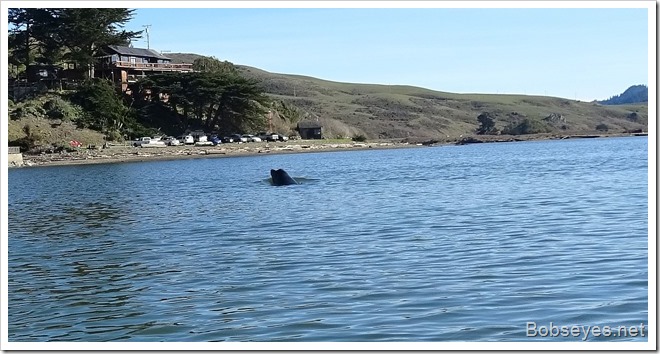 I wasn’t sure what I wanted to do so I paddled up along Penny Island to the upper end going by here where I could see a great blue heron up ahead fishing so I checked it out. 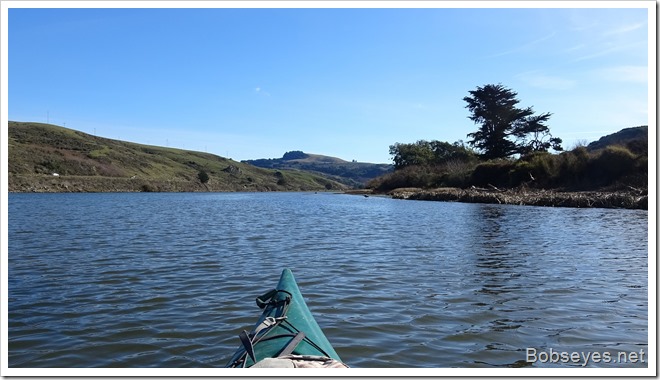 Here’s the heron. It seemed to be catching some kind of real small fish and was being successful but no pics of the catch. 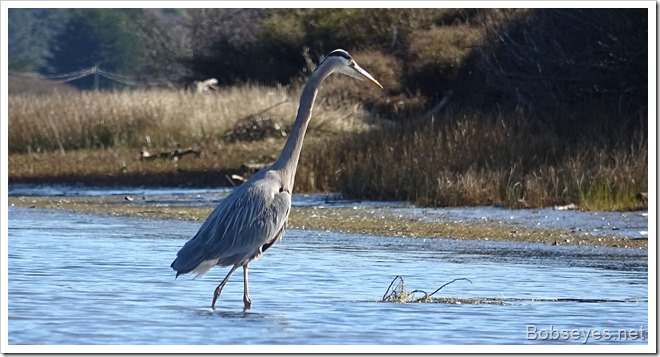 I sat in this spot near the upper end of the island for a bit then went on in for the day. 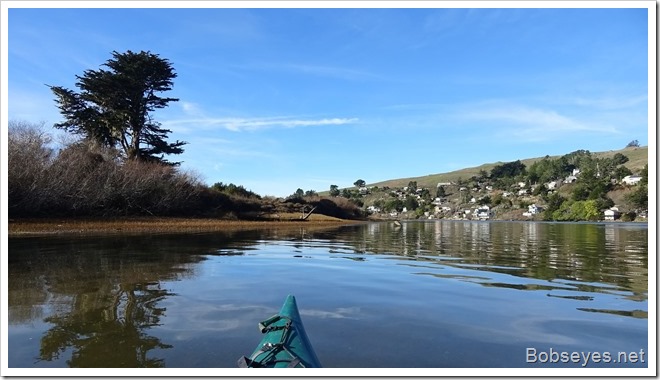 I put the boat on the car and headed on home. 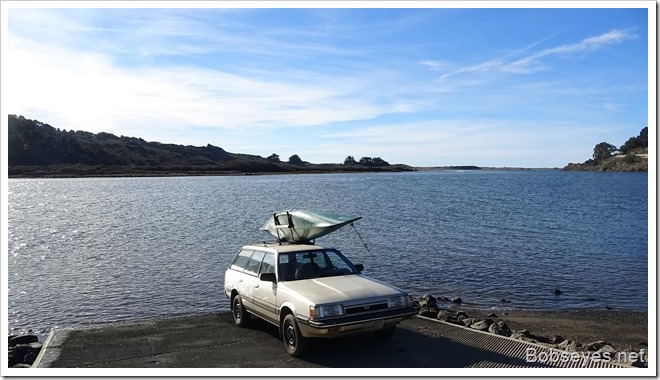 Checking out the fishing at Monte Rio

But I decided to stop at Monte Rio to see if the fishermen there were having any luck.

I was in luck as two of them were coming into the boat ramp after a hard days fishing. 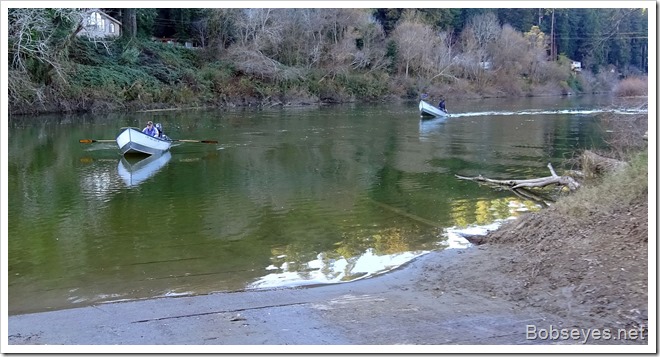 They turned out to be a couple local guys.

Here’s Tom with his catch a steelhead fish. 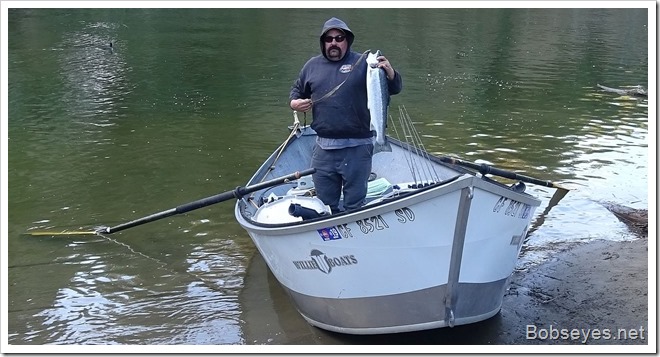 Mike got his fish out not to be outdone by Tom. He’s washing it off. 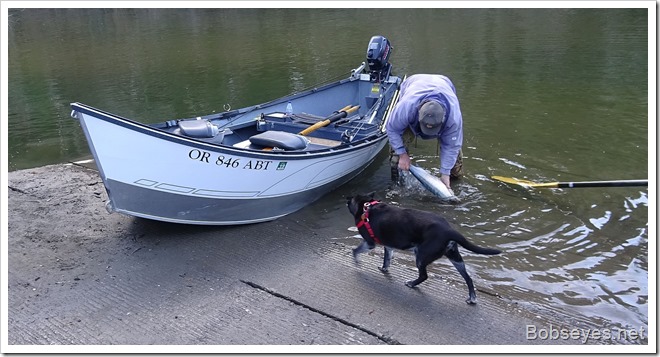 And now Mike is showing off his fish. 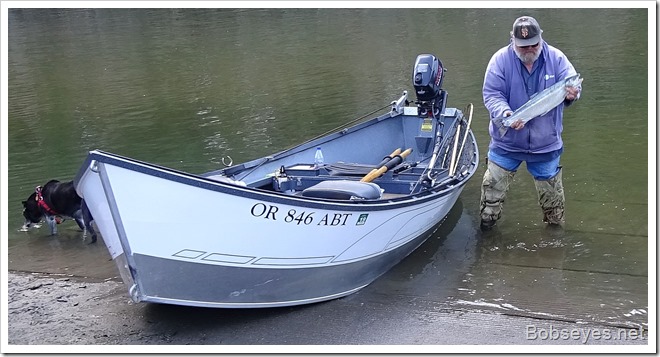 From there I continued on home and made a cup of coffee then went outside to see what I could accomplish as the sun was still out.

I needed to build another gate so I cut he rebar, welded it together, cut wire for it and put it all together.

I wasn’t expecting to get it done, but I did. 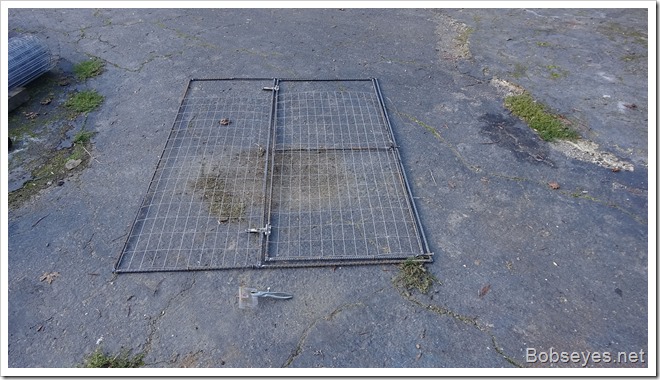 I also had a shovel sitting there with a broken handle that I thought I could fix.

I found a piece of inch and a quarter gray plastic pipe would almost fit over the broken shovel handle and I figured if I could heat the pipe up a bit I could force it on. So I heated the pipe up causing it to turn black and used a big hammer to pound it on and then I did the same and pounded the handle into the pipe. 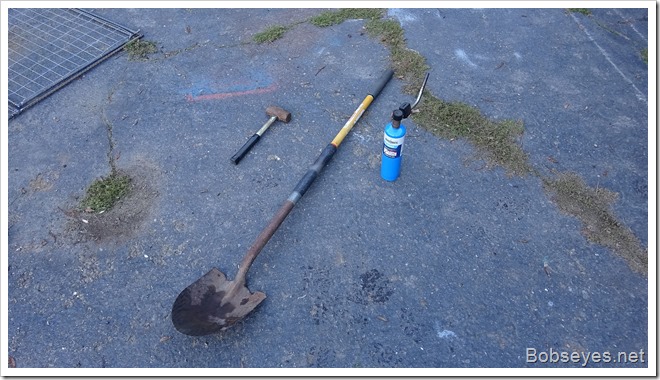 It’s pretty strong. I may not be able to use the shovel to dig out stumps but it’s good enough for lighter work.

By now it was starting to cool down so I went in the house and that was my day.

1 Response to A Paddle At Jenner, and Catching Steelhead At Monte Rio