I was off to Jenner around noon today. There was to be some wind but I didn’t care.

The wind wasn’t bad as I put my boat in the water. I had already decided to head down to the river’s mouth where the river dumps into the ocean as I hadn’t been down that way in awhile.

I was on my way down to the mouth area towards the right. But I spied some birds on the left that I needed to check out first.

Brown pelicans and some seagulls were resting there on the beach. 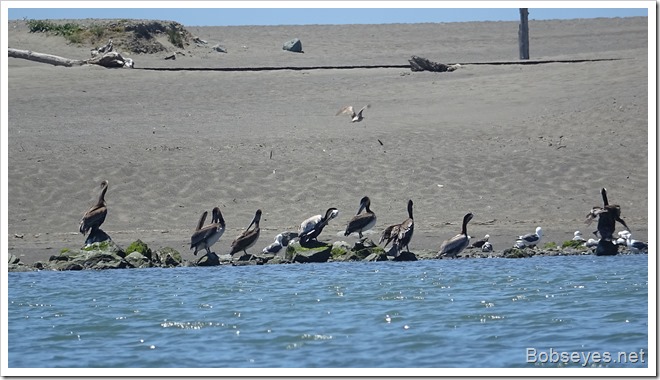 Paddled down to the mouth area

I continued on to the mouth area and paddled into the rocky area just ahead to have a look around. The mouth is going out straight back in the middle of the picture. 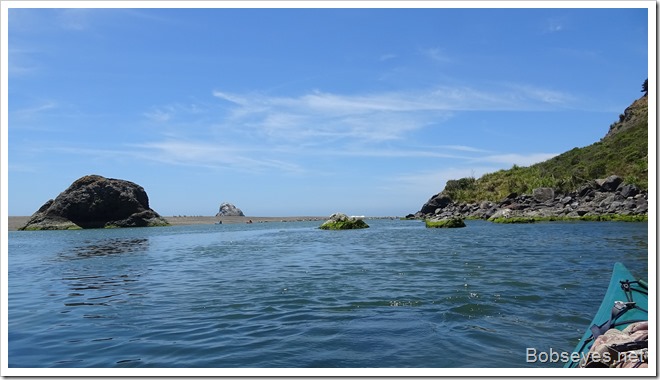 These two merganser ducks were thinking I was too close, but they were in the way of where I wanted to go, so they gave way and went for a swim and let me pass by as I wanted to go deeper into the mouth in back of the rock. 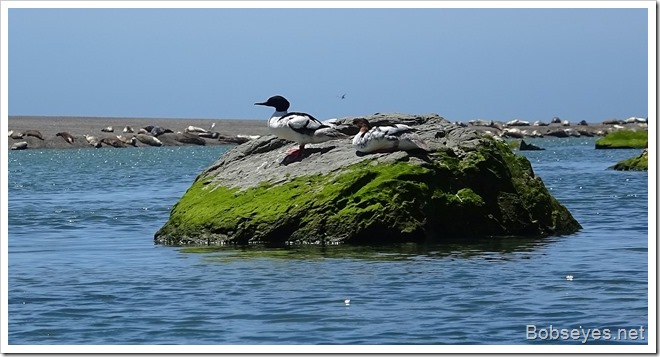 I paddled into this area looking out the mouth to the right where you can see some white, which is the Pacific ocean. 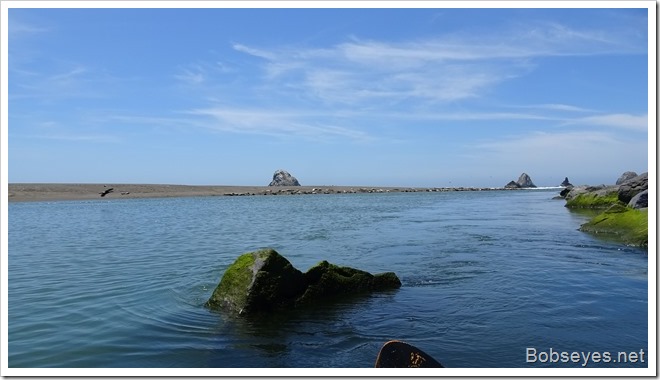 There were lots of harbor seals resting on the sand across from me as I looked out the open mouth into the ocean. 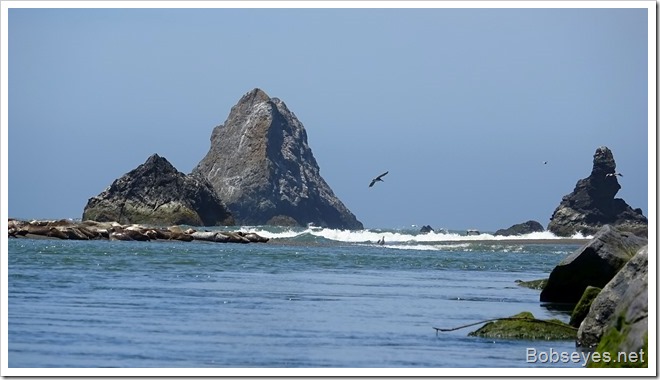 Here’s a closer look at some of the seals as ocean waves come in from the back. 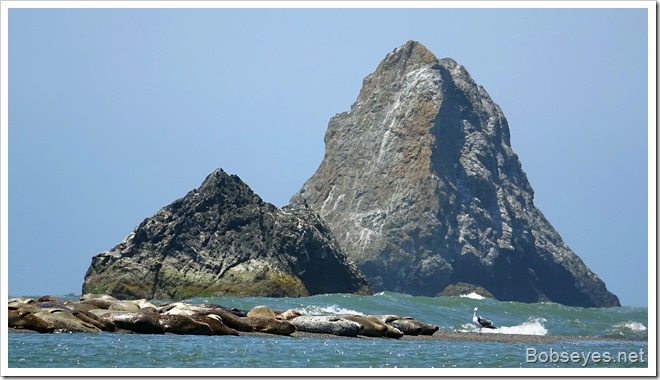 These harbor seals sure look nice and fat as they lay in the sun, keeping an eye on me. 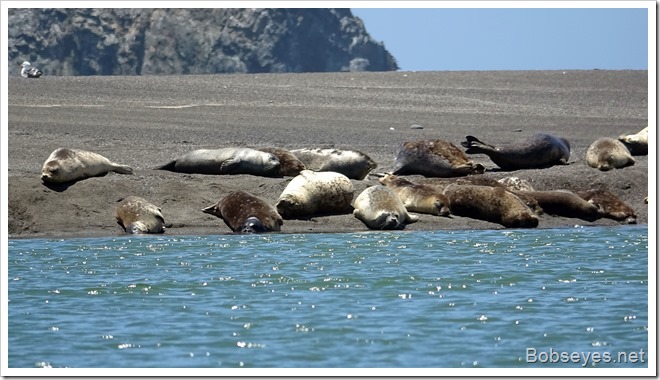 I paddle across the mouth and have another look down the mouth, before I turn and head back up the river. 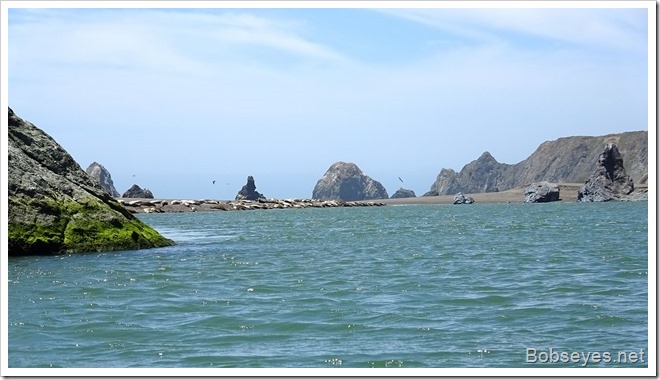 Heading back up the river

I’m paddling away from the mouth area and notice some geese on the sand on the right I checked out. 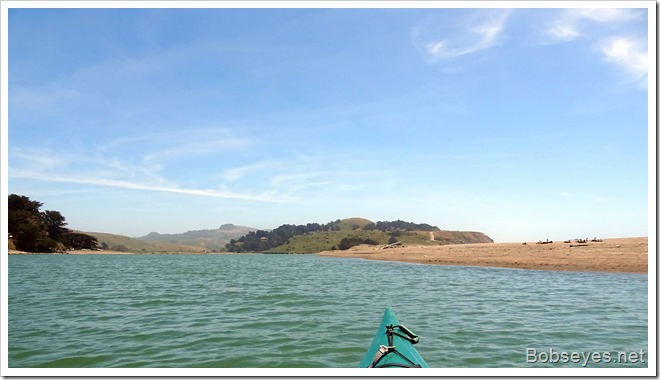 Here’s some of those geese taking it easy on the beach. 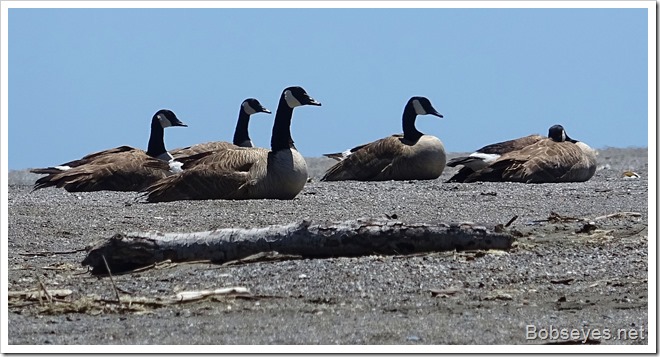 Working my way back to the boat ramp

I paddled on up around the back side of Penny Island taking it easy and stopping often and made my way back to the boat ramp and went on home for the day.

After a nap at home I went out in the yard and puttered. I clipped some wild blackberry vines which is a never ending task and with the heavy winter rains the vines are growing fast.

While I was sitting in one of my chairs I spotted a deer with her two little ones trotting into my yard like they owned the place. I’ve spent the last few days plugging holes in the fence trying to keep them out, so this shouldn’t be.

After spending some time chasing them out, I looked in the area I thought they came in and all I could see is maybe they squeezed through the spaces in the old gate at that location. So I got some boards and some screws and put small boards between all the spaces to make them smaller hoping this might help.

It was getting dark as I finished up on the gate. I sure hope that’s where they are getting in as I’m tired of chasing them out and also tired of all the stuff they’ve been eating in my yard. 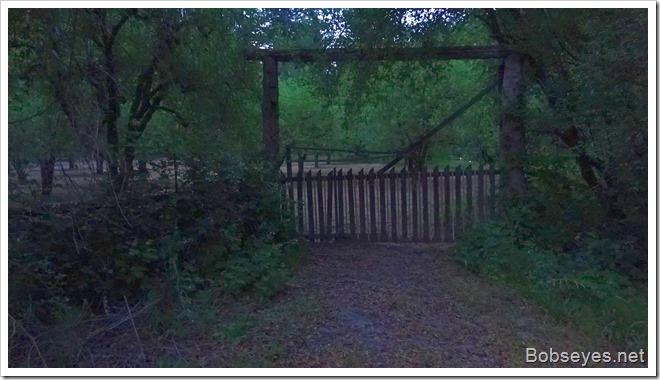 That was pretty much my day for mostly a good one, except maybe finding the deer in the yard.