Since Barry and I worked on clearing the roads up in the forest yesterday Barry said he was coming by for a dirt bike ride today. He arrived about 11 just as the day was warming up enough to make it real nice.

We took off for the hills. 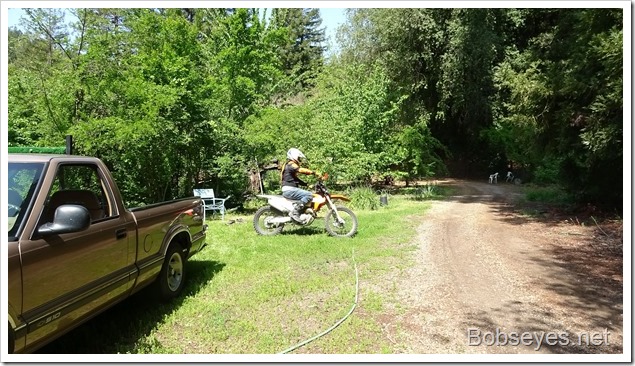 And had to cross the highway and go through this gate to get onto our property. 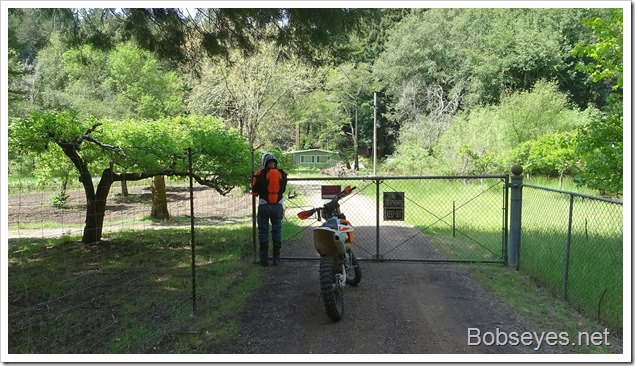 We rode up to  this spot first and stopped here to see if we could find any morel mushrooms in the grasses, but no luck. 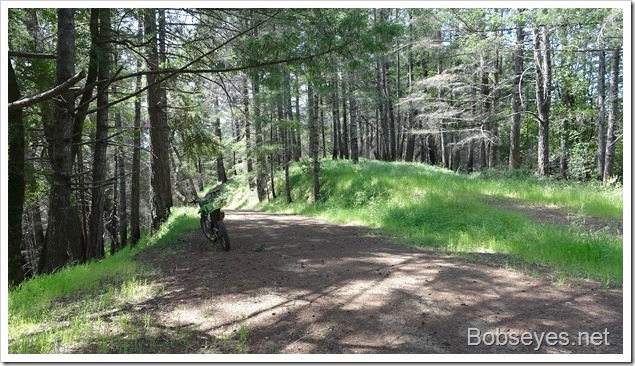 After riding around for about an hour we stopped here on this ridge top which is the highest one in this area, for a break. It has a nice view. 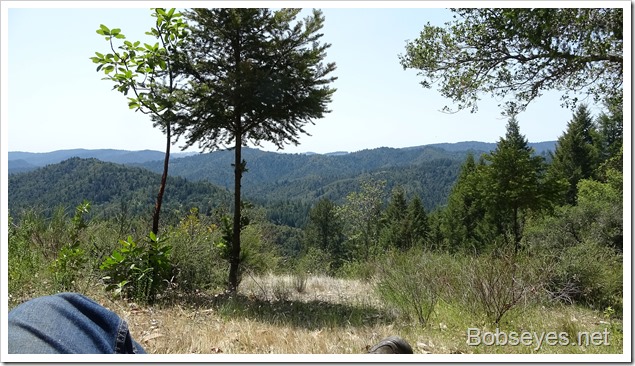 We rode around some more covering most of our property and  my cousin’s place too.

When we went by Indian spring we stopped for a drink of water and to check the spring’s water flow, which was good. 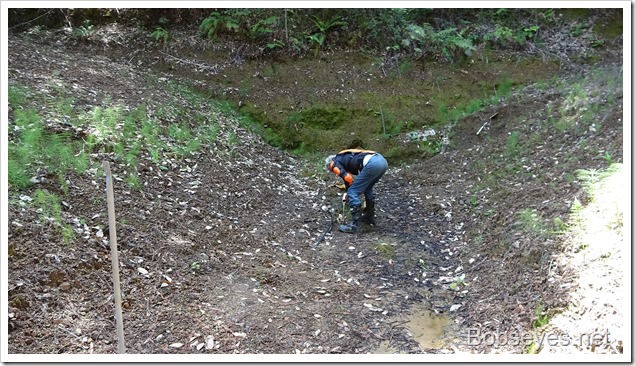 When Barry came back down to  my house we sat around and shot the bull for a bit and he left for home.

I needed a good nap which I did and eventually jumped back on the dirt bike and went back up into the forest to do a hike. I wanted to check out a ridge top for old trails.

Animal trails that is as they make pretty good ones in the steep hills that aren’t usually too steep. The animals I’m talking about would have made these trails a long time ago.

There aren’t as many animals around these days so the trails are there but one has to look hard to find them.

Anyway I rode on up to the ridge top and and parked the bike and started out on my hike going up along the ridge top looking for signs of the old trails.

I started off going up the hill as I couldn’t see any old trails yet, going through here. 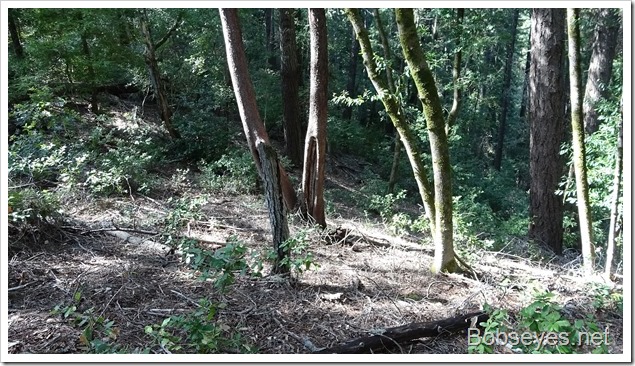 When I got to a steep part I started looking around the sides of the ridge for the animal trails as animals like to make the trails in the easiest places to walk and still travel the ridge tops.

I found one here although it’s hard to see as not much has used it in a long time. 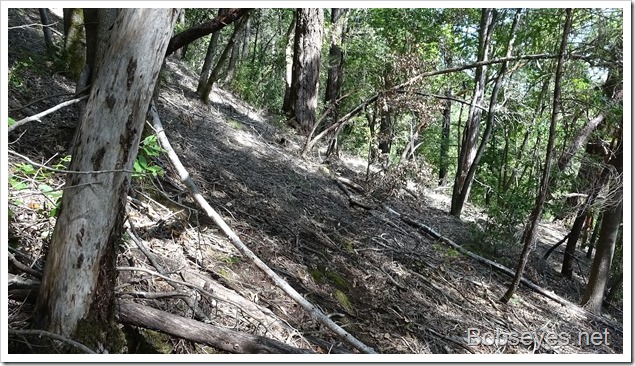 The trail went through here which I followed. 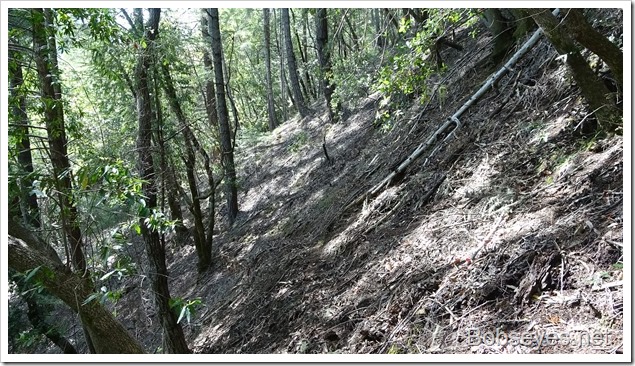 I was following the trail here when I noticed it went right through the big old log there that looked like the log was about ready to roll down the hill so I had to be careful, just in case 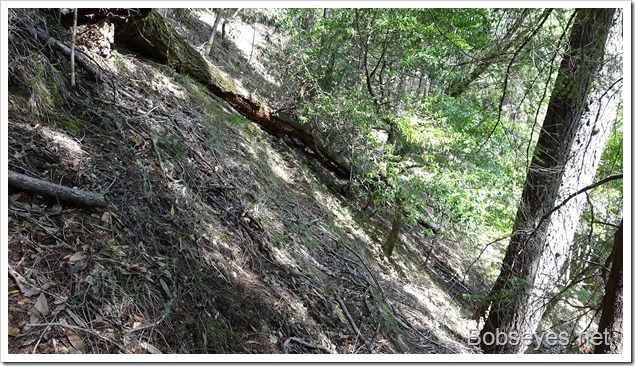 The log was more stable than I thought so I worked my way over it and continued on the old trail. 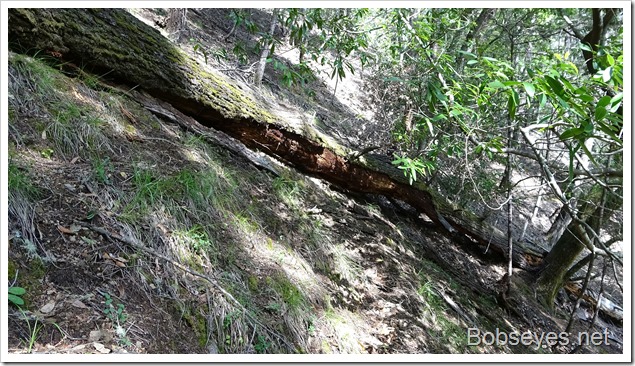 I continued on through this area and was losing the trail which was ok as it wasn’t a steep area. 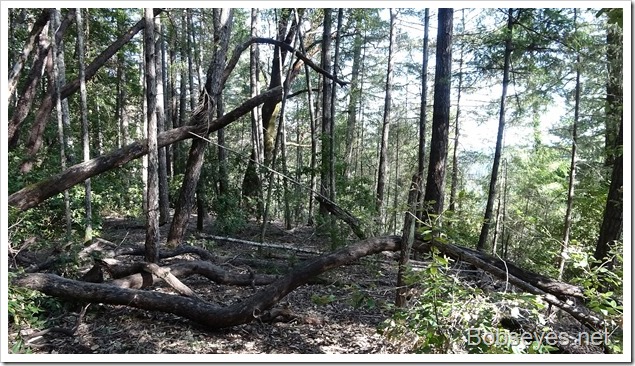 Eventually I lost the trail and had to hunt for it some more going through here where I think I picked it up again. That big old tree fell down not too long ago. 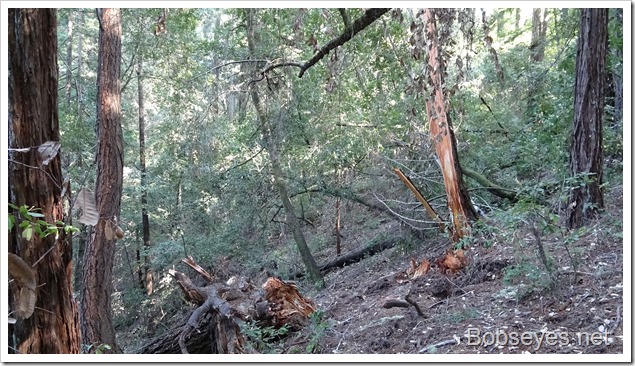 I lost the trail once or twice more and got to the end of the ridge top so started back picking up the trail through here. 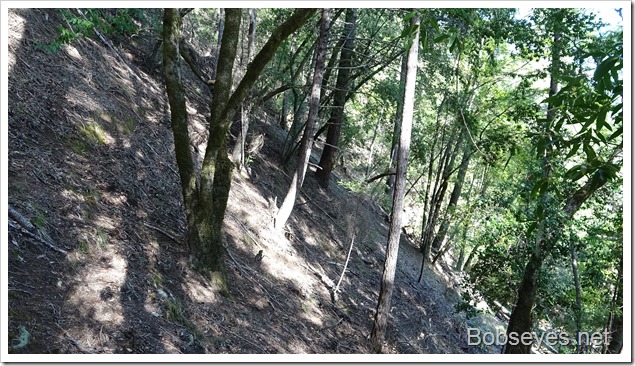 I was trying to follow the trail back to the dirt bike as this part I’d missed on the way out and had gone up the steep part. The trail goes to the right of that big tree and the dirt bike is getting closer. 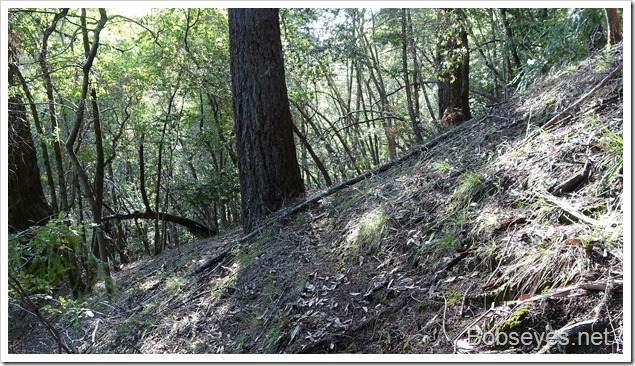 Following the last part of the old trail though here I came out right at the dirt bike which was good as the trail is much more level than where I started out from the dirt bike earlier. 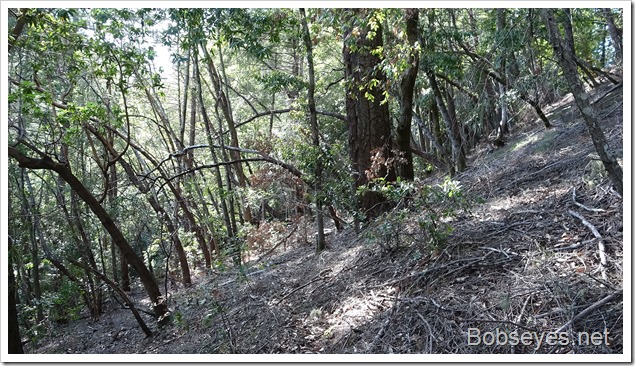 That old trail shows promise so I’ll have to hike it a couple more times to figure out exactly where it goes and then eventually I’ll likely start doing some work on it to improve it.

I headed on home and got there about 6:30 and was pretty beat so that was my day.

(Visited 107 times, 1 visits today)
This entry was posted in Uncategorized and tagged dirt bike ride in the forest, hike in the forest. Bookmark the permalink.