Cruising in the Jarbidge area

This morning as my eyes opened I could see I was parked behind the mountain and the sun wasn’t coming in here until a bit later. It did arrive around 9:30 which really helps get it going in the morning.

My plan for the day was to head pretty much west going by the Diamond A Ranch for a visit and on to a camp I thought at Bear Paw Mountain, but that’s not where I ended up.

Anyway, driving out the canyon that the Jarbidge river flows down looks like this at least in this place. Some one once told me there’s some Indian petro graphs on the other side of that little eye up on the left of center but I’ve never checked them out, maybe sometime. The roads a bit rocky but not bad it you keep the speed down. 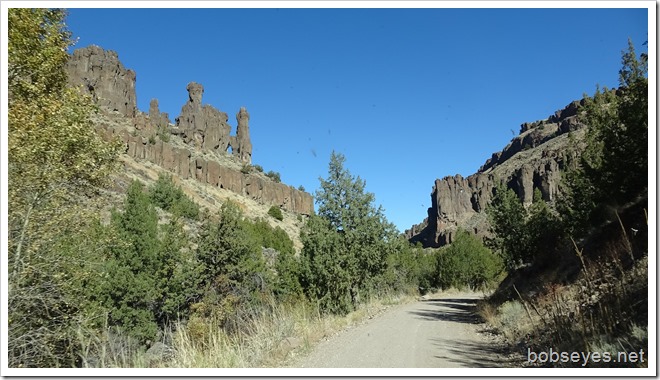 Another view looking up at the rocks from the road. Looks like some interesting hiking up there. 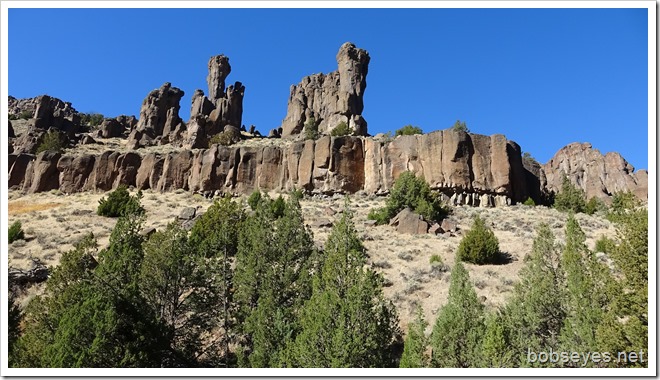 I turned off the Jarbidge road at Buckhorn Creek and turned into the Diamond A  Ranch for a visit. I’d been here last a couple years ago and some new people had  moved in and I met the wife Jackie and her daughter that had an Indian name I couldn’t remember that turned out to be Cheyenne.

I’m driving into the ranch area where they live. 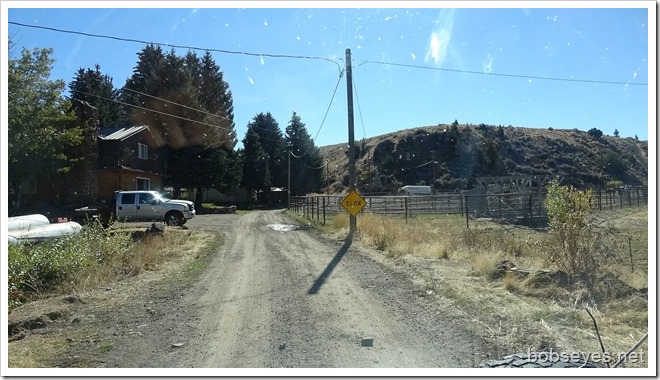 I see some dogs and the little girl whose name I can’t remember. Later I find out she’s playing on s new swing set her grandma got for her just recently. See her there just above the mirror checking me out. 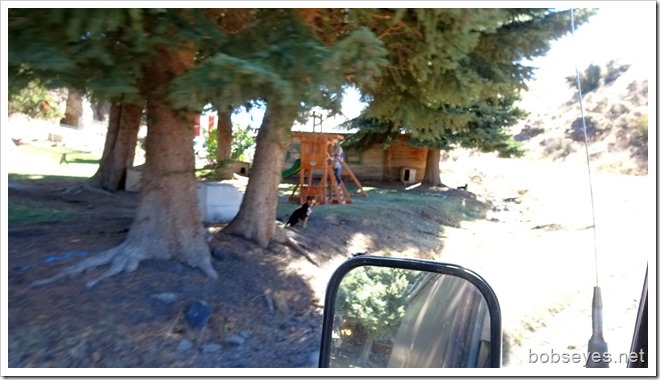 No one else appeared to be around so I asked her where her Mom was. She said over there  and pointed out past these corrals. I could see some cows coming in with three riders pushing them. 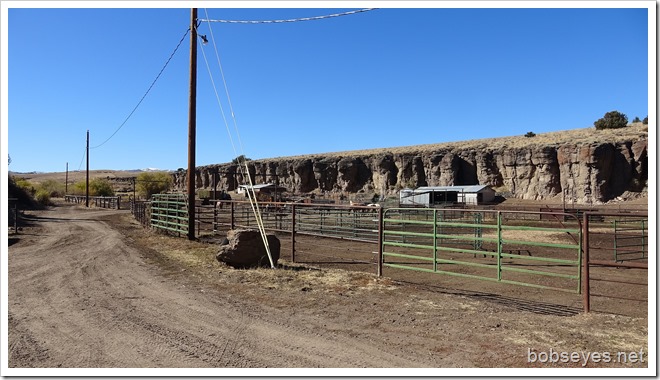 So I talked with the little girl for about ten minutes waiting for  her Mom to maybe come by. I found out about her new swing set and the two times she broke her arms since I last saw here. Once falling off a horse and the other time something about a table, maybe falling off one, but anyway she was doing well and a real sharp little girl of four that really impressed me. She carried a better conversation than many older people I know. :O)

Eventually her Mom spotted my van and rode on over swinging her lariat. I said whoa, I’m a good guy, you don’t need that. :O) She didn’t use it on me and smiled.

This was my chance to get all the local Jarbidge news so I asked her about the mining above the town and yes a big mining company from Australia is drilling holes looking for gold.

Eventually she had to go as she said she had a new baby in the truck back there so I said my goodbyes and see you next time and we parted company.

Jackie on the left and Cheyenne on the right. I didn’t get the horses name but when I referred to it as a she Cheyenne informed me that it was a he. Cheyenne is four and a pleasure to talk with. 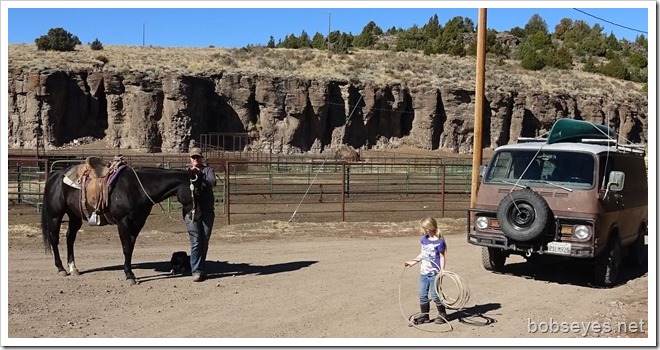 They live in this little valley which is the ranch houses and shops of the Diamond A Ranch which is a Simplot ranch. Simplot Corp. grows a lot of the fast food potatoes and beef for burgers. They own a lot of the big ranches in this area and in Bruneau where I was earlier. 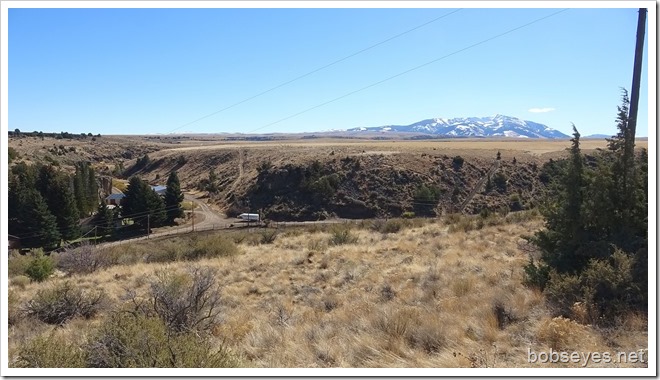 I continued heading west out this road headed for Bear Paw Mountain. 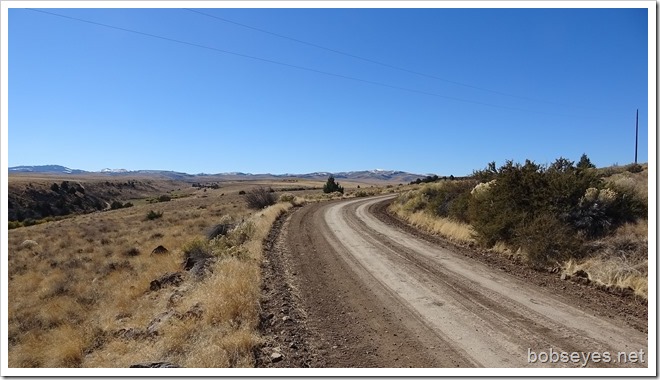 Along the way a truck pulled over coming at me so we shot the bull a bit. . He asked me where I was from and I said the Russian River and he said where. I said you mean on the river, yes.  I said Guerneville and he said he grow up in Monte Rio. His son’s name was Ben but I forgot his first name but his last name was Hutchinson. His son had gotten his buck and they were looking for one for him.

Road up to Bear Paw Mountain

I turned off the main road onto the road that goes to Bear Paw here. Snow in the mountains I have to watch out for it blocking roads or making them too muddy to pass. 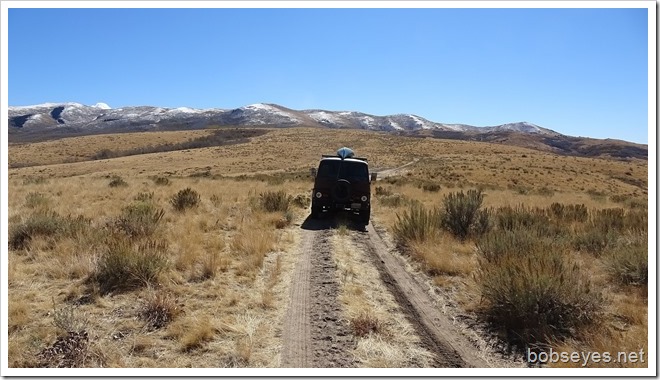 I was thinking of camping on the back of Bear Paw Mountain by a spring but the road going down looked like it might have some muddy spots in it so I decided to spend the night on the hill top here. 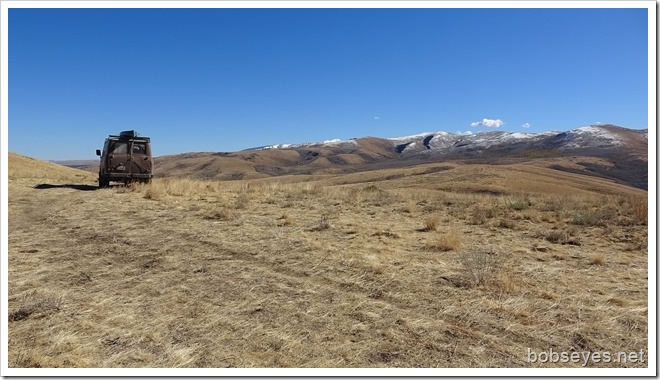 I sat around for a bit . It was still early in the day so I changed my mind and decided to go over to the Rowland area about another hour or so up the road.

Headed to the Rowland area on this road which goes along the Bruneau River to the left. 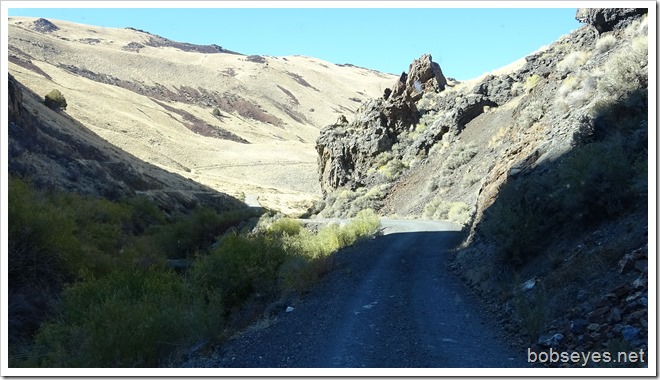 I drove past Rowland and turned into what I call Scott’s ranch and found out a bit later from a guy it was called the Stoat Ranch earlier.

I  had to go through these trees on the road into the ranch. 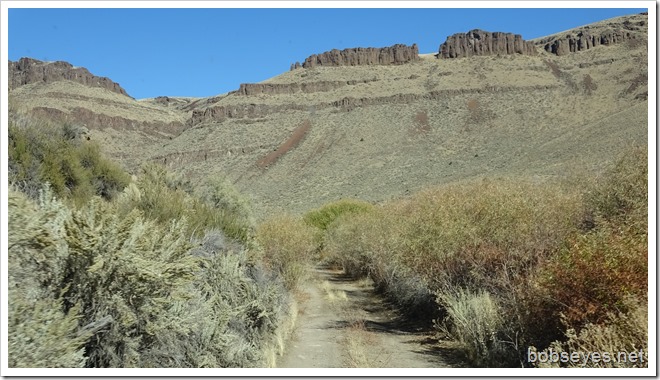 I was going to camp down past the grassy area past the main ranch but it was just too much high grass so I drove back to the ranch area to camp. No one is there and it’s owned by a sportsman’s club in Boise I believe and it’s ok to camp there. 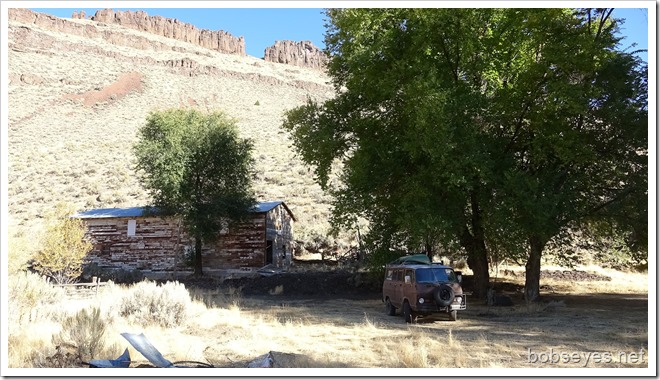 This is a picture of the Bruneau river at the ranch. 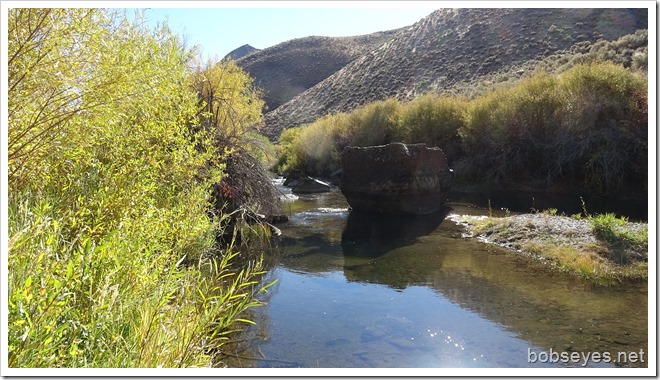 Sitting there in my van at the ranch house I was thinking an evening ride might be nice to see if there’s any wild animals out just before dark so I decided to drive the short distance out the ranch road to this place. I thought this was Rowland but a bit later I ran into some guys that said it was a ranch I forgot the name of and Rowland was back up the main road just a bit where the old mines where. OK, good with me. 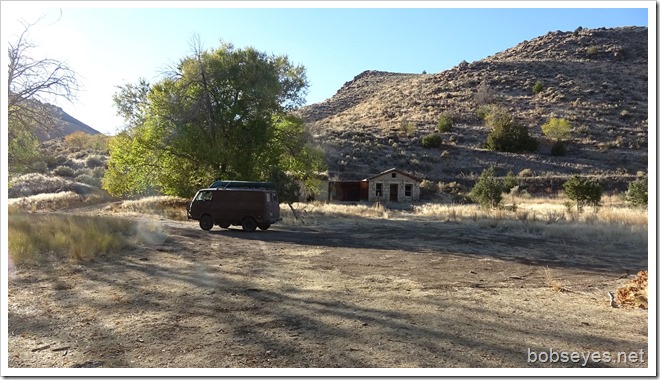 Anyway, I looked around a bit and had something to eat and as the sun started down I started up the road that takes me out of the canyon and up on the grassy area on top.

Once out of the canyon and up on top it looked like this. Eventually the right side was all black where they’d stopped a big fire this summer. 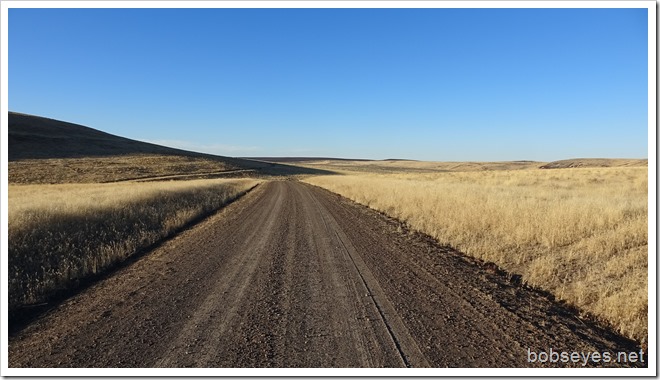 As I was traveling along and not seeing any wild animals except for some cows it started to get dark so I decided to pull over on the next dirt road I ran into. After a couple miles I spotted this dirt road and pulled over and am camped. 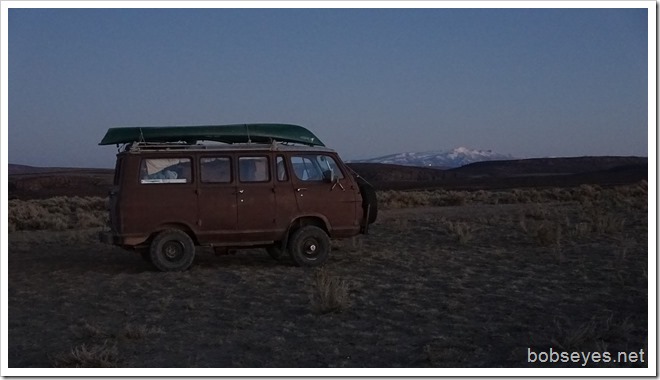 A brooder view of my night’s camp spot. 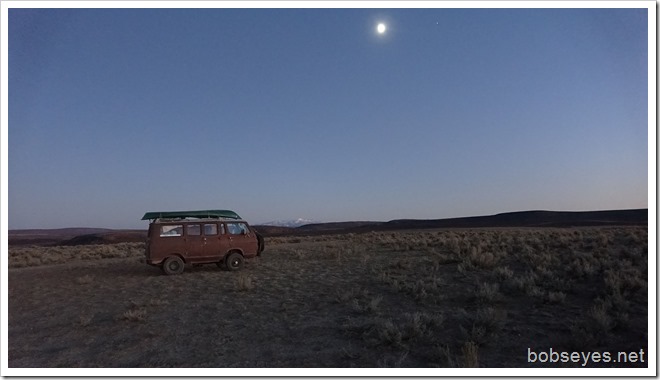 I will need to get some gas so have to figure out which way to go for that. Going back to the Indian Reservation I can get gas and use the internet too so I’m thinking of going that way, as the other way I can get gas maybe and not sure about when I’ll get internet again which might be a week so I think the Reservation is the way I’m going and then I’ll be heading west again headed for northern California to go see about visiting with the hunters from Guerneville that are up there. One of them is Mr. Guerne a descendent of the original Guerne of Guerneville.

Or Maybe spend another day

I could spend another day in here but the Reservation computer lab is only open on week days so if I want to use it I have to get there tomorrow. I might come back out to Mary’s creek after that before heading west as it’s up ahead a bit and not that out of the way if I decided to do that. I’ve been also thinking I can get some chocolate ice cream at the Reservation store where I get gas without corn. :O)

Next day at the Duck Valley Indian Reservation IT Lab

Since I had to come so far south to get gas and post I decided to head back to the Willow Creek Reservoir and to Winnemucca and on to northern California.

Next post will likely be from Winnemucca in a couple days.