A Jenner Paddle and Will the Bobcat Get the Ducky’s

Too much work burning me out

I decided I needed to do something different for a change as all this work is starting to burn me out.

I checked the wind report and it said it was going to be a bit windy at Jenner, but I can handle that.

When I arrived at Jenner the sun was out and the wind was up a bit.

I put the boat in the water and paddled across the river and decided up river would be the way to go as there is less wind that way than down towards the ocean.

I was paddling along here. 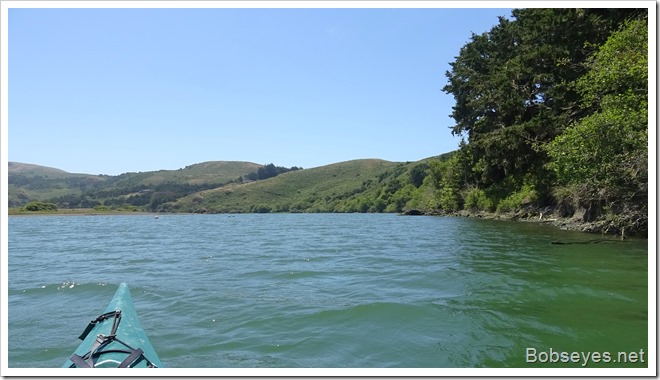 I could see these birds across the river from me resting on the gravel. 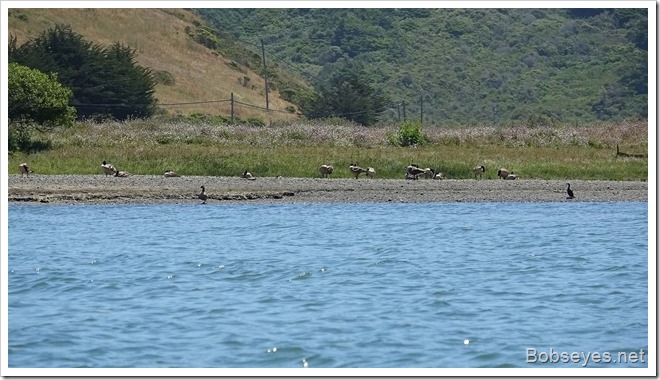 Something caught my eye on the shore next to me which turned out to be a bobcat hunting along the shoreline. From experience I immediately turned my boat away from it and headed out from the shore about a hundred feet.

I’ve found that works to keep them from just hopping into the brush and disappearing.

And it worked, the cat laid down and started grooming and watching me. 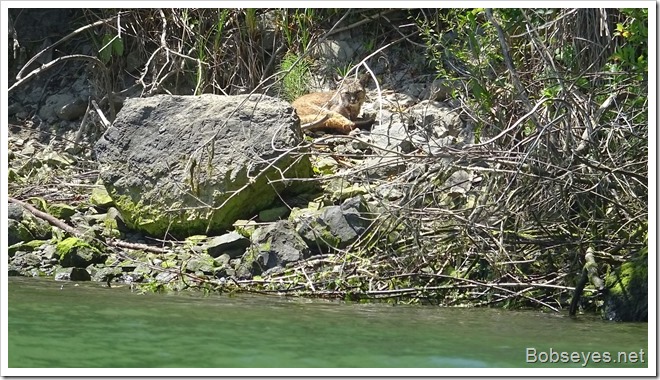 I moved a bit closer and eventually the cat started to move up along the shoreline hunting. I followed along and took pictures. 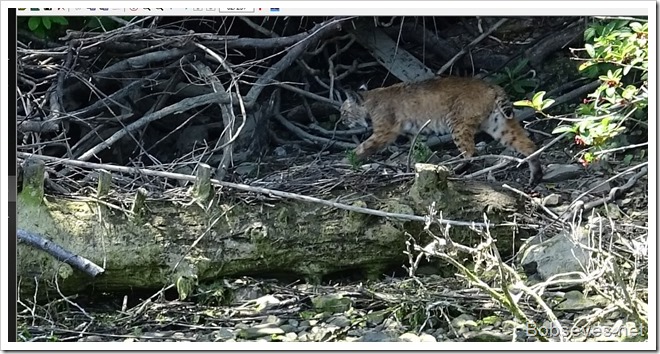 Sometimes the boat would drift fairly close to the cat. 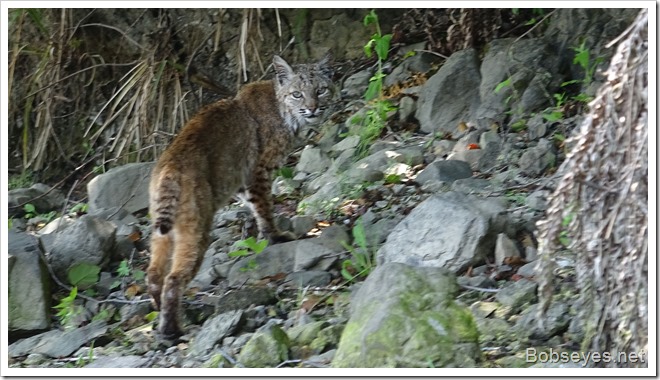 The cat laid down here so I left it and continued up the river after following it about a half mile or so. 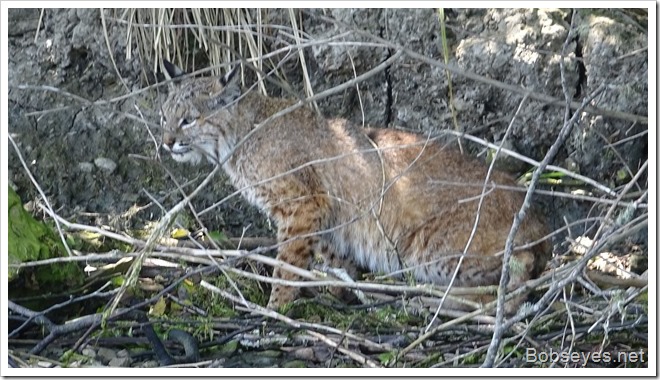 Will the bobcat find the ducks

Not far ahead of the cat I ran into these mallard ducks and was wondering how they’d fair if the cat found them as it was headed this way. 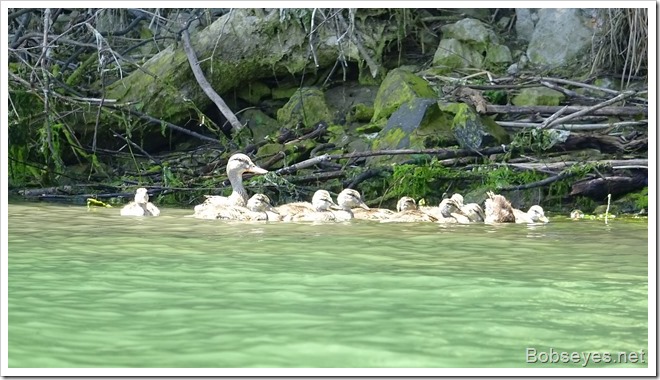 So I went back about a hundred feet and found the bobcat again. I was drifting right for the cat and couldn’t move without spooking it that’s why it’s looking at me like that. 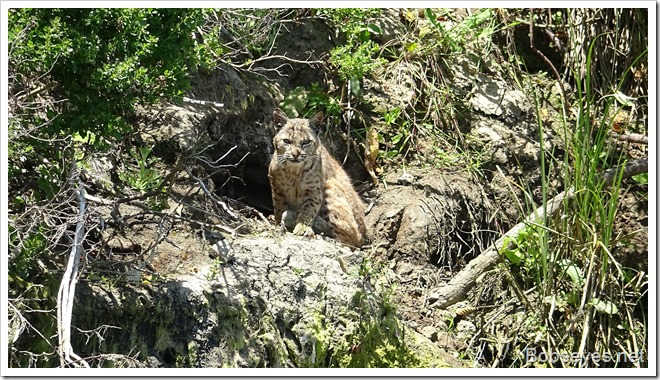 Bobcats headed for the ducks

It went back in the brush and was headed in the direction of the ducks so I went back to the ducks to see what would happen. 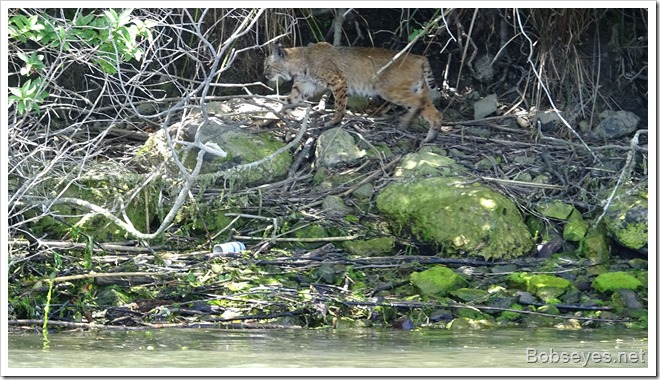 The ducks were right by the shoreline as I watched. I couldn’t see the cat, but knew it was getting close.

The momma duck must of gotten the cat’s smell as it finally moved out from the shoreline and right towards me so they all were safe. 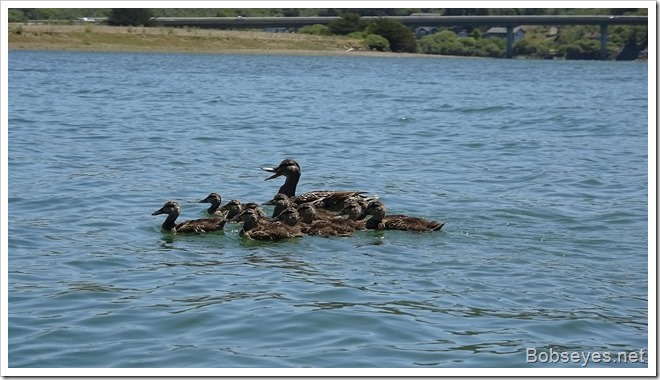 I looked for the bobcat for a bit but didn’t see it again.

So I continued my paddle up to the grassy spot I call Muskrat where I sat for a bit. But the wind was picking up so I didn’t stay long as it was blowing me around some. 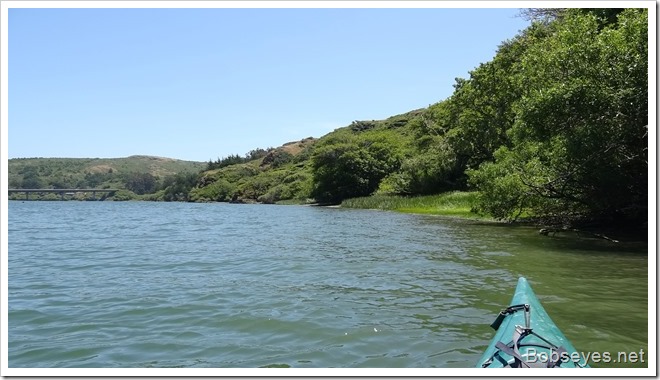 Blackberries on the mind

I was thinking some blackberries would be nice if they were ripe yet so I headed down the river to this spot I call this Swamp Rock Trailhead and beached my boat to have a look for berries. 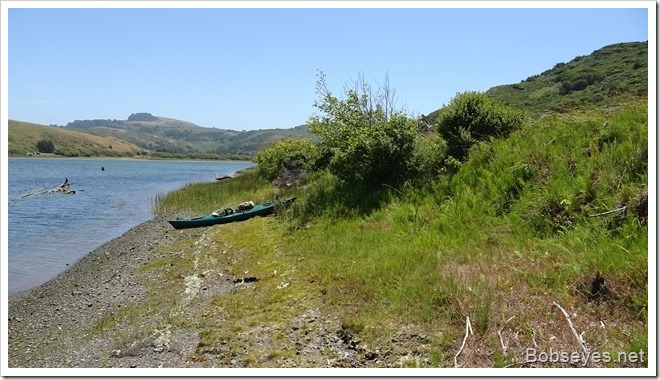 I walked through the swamp area looking for berries. No water is in the swamp right now or the going would be rough. I did jump a small deer out of here as I entered. 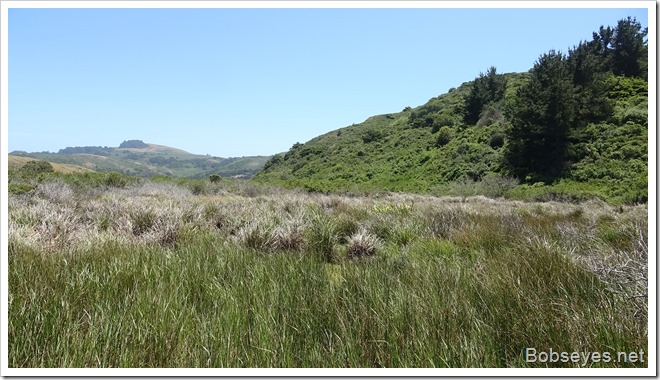 Here’s what I was looking for, the prize. Wild Blackberries. I eat the riper red ones too. 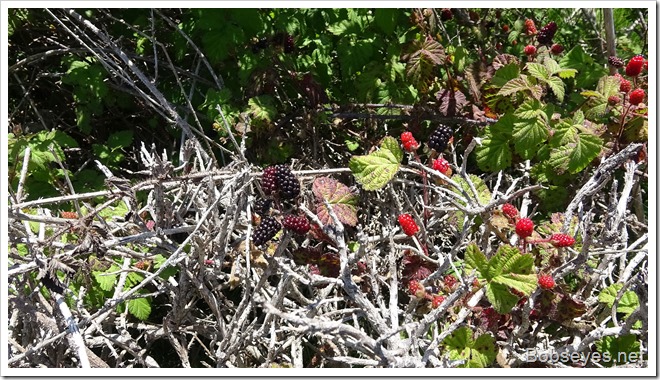 I find it hard to get pictures of these berries as they disappear rather fast, as least until I get my fill of them which I finally did.

Paddling in the wind

The wind was up now pushing about twenty miles an hour. The trick is to sit low in the boat to make a smaller sail so the wind doesn’t bother the boat much and I can still go along in the wind.

Here I’m headed in to the boat ramp. 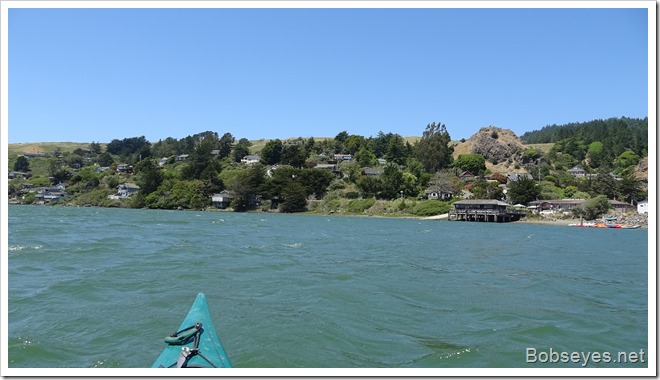 Food for me and food for the chicks

That was a nice paddle. I put the boat on my car and returned to Guerneville to do some shopping for stuff to eat and then drove to Barker Pet Supply to see how my chicken feed order was progressing.

I talked with Karen about the seed I’d need later, but for now I just need some corn less chick feed which she got on the phone and ordered for me which will be in tomorrow so the chicks are taken care of. She will continued to find out about getting some whole type seeds so I can mix my own feed with no corn as the birds get bigger.

I drove on home from there and found my self all tired out and not wanting to do much except nap so I did. I got up from my nap and still didn’t have any energy. I wanted to get my supply order together so I can go get the stuff I need tomorrow, but I just couldn’t get it going.

I’ll just have to figure the stuff out tomorrow before I can leave to get the stuff.

Back in the house for another nap and that was it for me today.