A Hole In the Jetty, Some Chainsaw Pruning and Captchas

Since it was a king tide, meaning a high, high tide, the current wasn’t much, so I decided to go down to the mouth area and have a look, so I headed on down along the river’s north shoreline which looked like this. 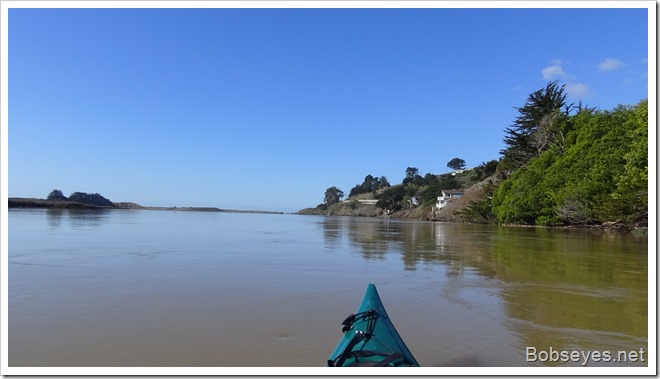 I paddled through these ducks that seemed to be mostly taking it easy. 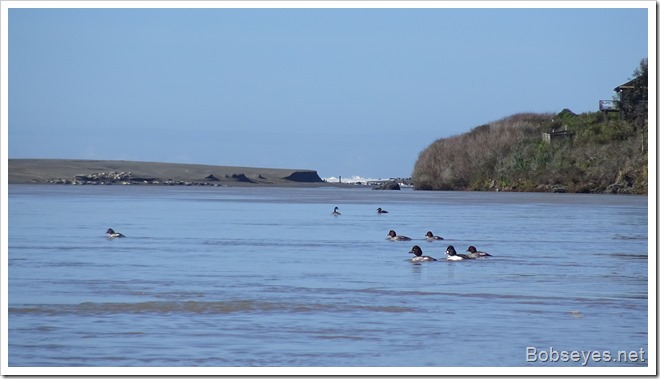 I could see the ocean was a bit on the rough side and the waves were making a lot of noise pounding the beaches. 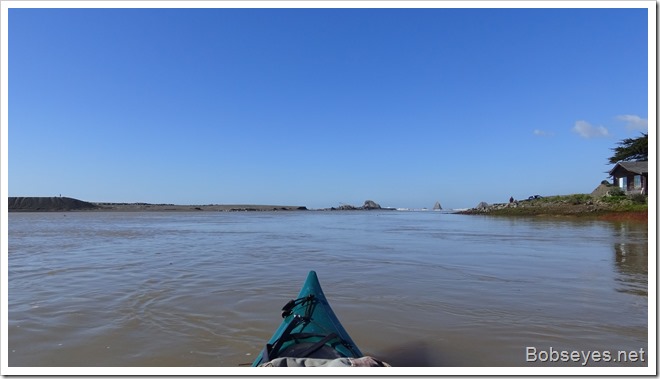 A hole in the jetty

From this point I could see the ocean had removed the sand from a spot just to the left of that big log down there near the middle. Appears the ocean has already taken out a big section of the jetty there in years past. This is the first time I’ve seen it exposed this much. 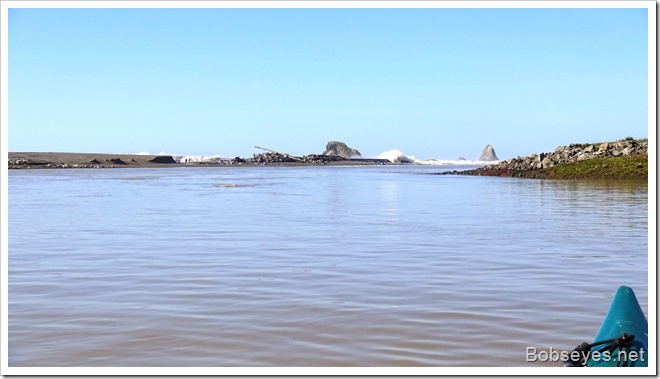 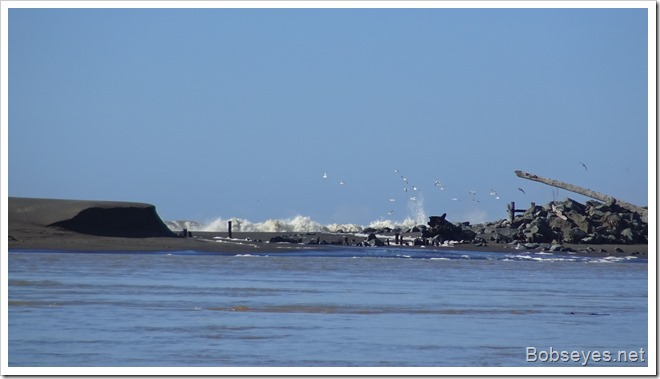 Headed on up the river

I hung around the area for awhile checking things out, then paddled back up the river and crossed over to Penny island and paddled up it’s side. 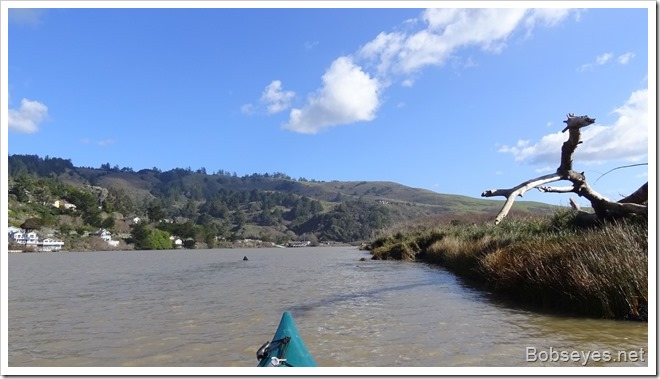 I continued on up going by this area headed for Eagle’s Landing. Nice day. 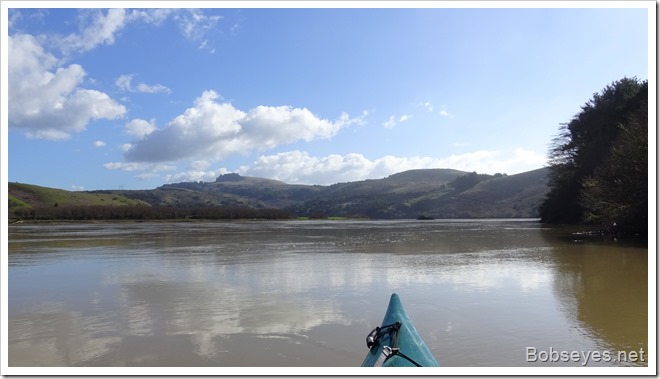 While I was sitting in my boat at Eagle’s Landing ,one of my seal buddies came by to say hi which it does almost every time I stop at this spot. 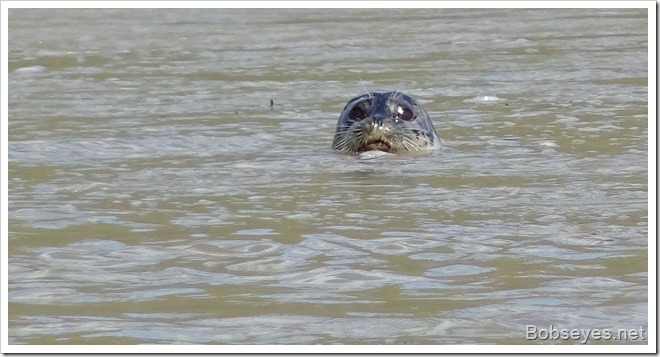 I thought about going up river further, but I didn’t feel like going against the current anymore today, so after a good rest, I turned the boat into the current and started a drift on down the river towards the boat ramp.

Is that a deer over there

I thought I saw a deer across the river on Penny Island, but I wasn’t sure. I was watching that area as I drew a bit closer and sure enough it was a deer grazing grass on the island. 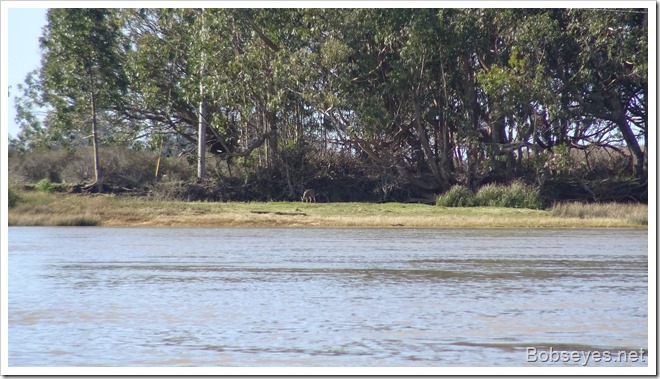 That certainly is a river otter

As I was watching the deer, I drifted past this rock and out of the corner of my eye I thought I saw something on the rock, but wasn’t sure what it was and thought maybe a bird so took a picture real fast and caught this otter, just before it spooked and dove under the water not to be seen again. 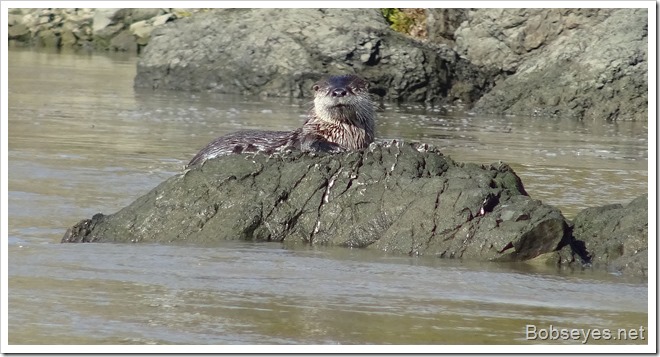 Drove on down the the overlook

This was my view of the open river’s mouth. It’s open from the north side clear to the jetty and if the jetty wasn’t there if might open even further, but with all the cement and rocks, this is as far as it can go south. 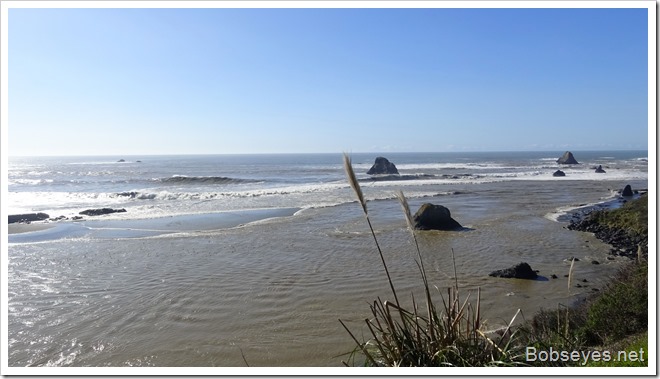 Nice view of the ocean

This was the view looking south towards Goat Rock and you can see the spot the ocean has just opened up. 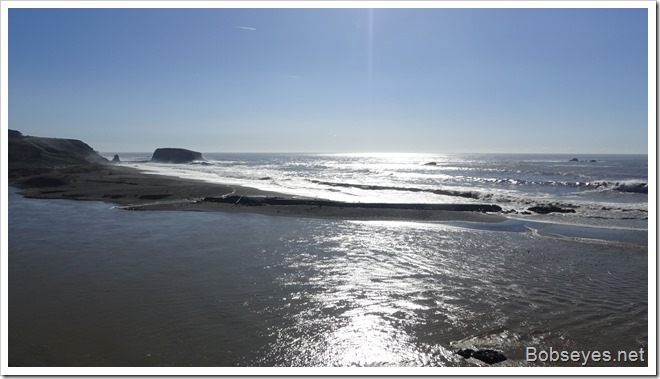 The washed out area in the jetty

The ocean has just recently washed the sand out of the spot where the waves are washing over, showing it has already in times past washed out the jetty in that spot. One of the reasons I think the jetty should be removed is so the ocean can do what it wants and not be restricted by the jetty. The jetty stops the mouth from opening any further south. 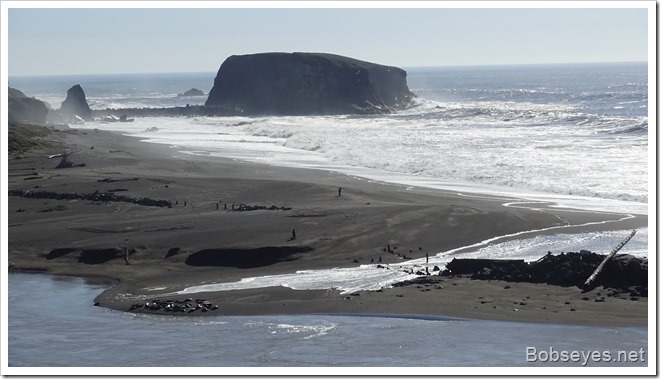 After awhile I headed towards home, but stopped in Monte Rio to check out the boat ramp there which was still under water with lots of mud.

Just as I was leaving Ray pulled in, in his truck so I pulled back in and we shot the bull for a half hour or so.

I went on home and had a nap, then went over to my brothers to get the mail and I looked for his small chain saw so I could do some rough pruning on some of my apple trees. I found the saw, but couldn’t find the gas for it. I was about to put the saw back when I looked at the gas in the saw and it was full, so I was in luck and went back home and did some radical pruning on a couple of my old apple trees which I had neglected for several years. I pooped out before the saw ran out of gas and the day was cooling down fast, so I called it a day and went in the house. As I opened the door, the cat shot in just before me. I fed her and then took it easy.

I’ve been doing a lot of work to keep the bad guys out of my blog site and had installed what they call captchas which are fuzzy and one has to type in the fuzzy letters to get access to login or comment. These things can be hard to read so I changed to a, do the math type which seemed a lot easier to use.

But as I was doing more research I discovered Google had a better captcha which they call reCAPTCHA  noCaptchA that is much simpler to use so I researched that and decided to install them instead of what I had. It’s a free program as I like it. :O)

All a person has to do is put a check in the box, but if the box detects you are not human and a robot, it makes it much more complicated. And this one added much more protection than the one I had.