Tried to visit my hermit friend

I had some plans today, but once I got it going they changed as I decided to go for a hike up through Armstrong State Park to visit a friend of mine. He’s sorta a hermit that lives up behind the park and has been there for years. He’s getting up there in years and I hadn’t paid him a visit in quite some time. I tried to visit about a month ago, but he wasn’t home.

Only a five mile hike

Anyway I headed out my front gate and up the road to the park. It’s about two and a half miles up to his place so this would be about a five mile hike from my  house.

I walked up the road in the park taking the right fork here. 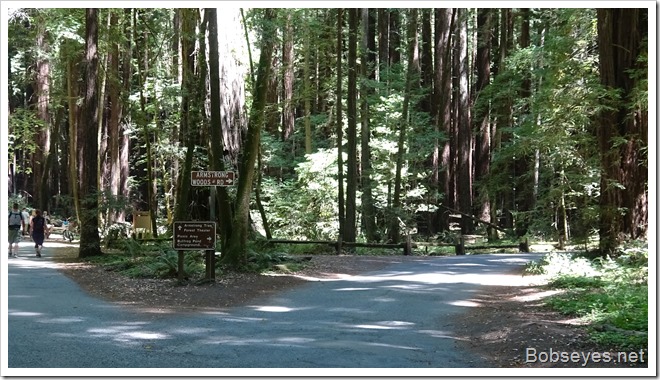 There are a lot of big redwoods in this park. I went by these as I walked up the road. 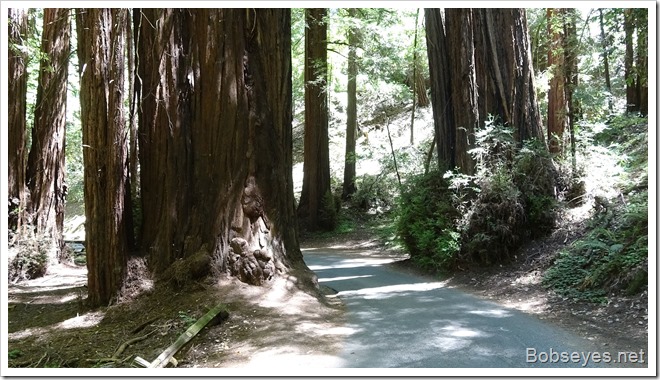 This is an example of an old redwood cut in half to show the insides. Most people look at the rings as they tell how old one of these things is. But this one also tells something that most other people don’t know. The existence of this park is really only here because most of the big trees in this spot are full of rot which isn’t really too bad for the trees as they can live with a lot of it. But why the park is here is when this area was logged before 1900 things were mostly done by hand as there wasn’t much in the machinery stuff especially the cutting down of trees. Cutting one of these down by hand took some time. And to top that all off, they only took the primo part  of the tree, so this tree would have been not worth the trouble to get it down, so they removed very few redwoods from this spot and it was eventually made into a park because they were the only trees left. Sometimes it pays not to be perfect. 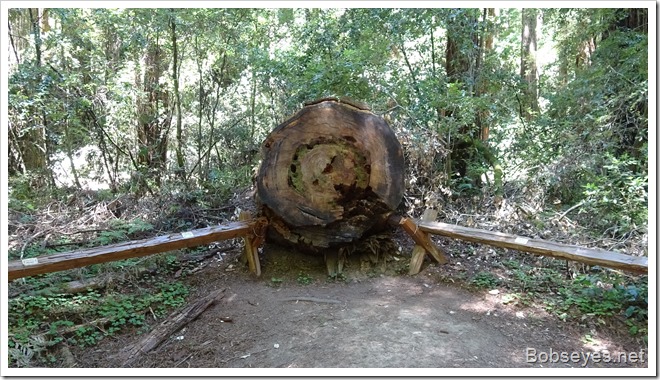 The road is named after my hermit friend

I continued on up past the redwoods and on up the road that goes up the hill to this gate where I noticed this new to me sign. They have named the road after my hermit friend. It didn’t used to be. 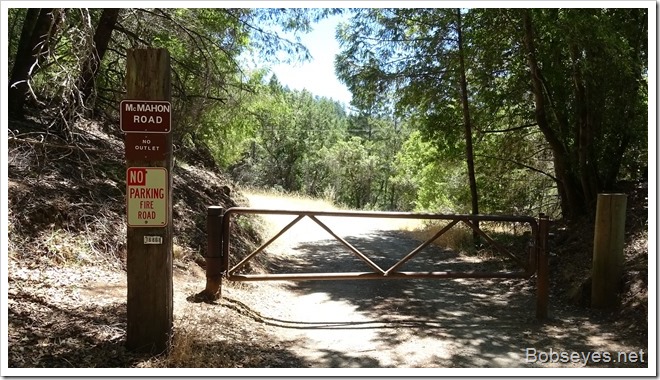 Shortcuts when I can

My trail goes through this hardwood part of the forest taking shortcuts I know from living here most of my life. I used to hike around the park a lot cutting cross country when ever I could. 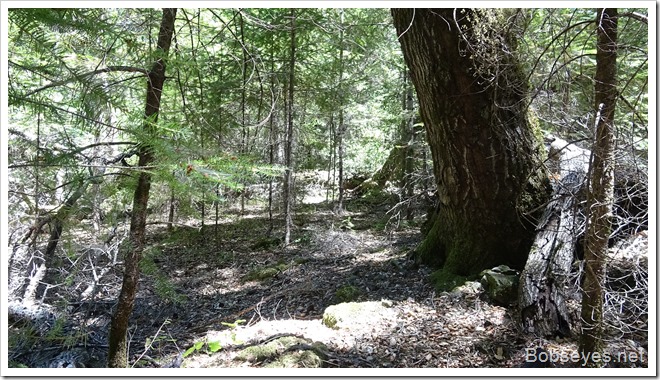 I arrived at his house and rung the roped bell he has by the front door, but it seems he wasn’t home again. I looked around his place a bit to make sure he was still alive and it looked like someone still lived here.

Things change  as one ages

He used to have over five hundred rose bushes, but now this appears to be the only part of his garden he is still able to take care of. 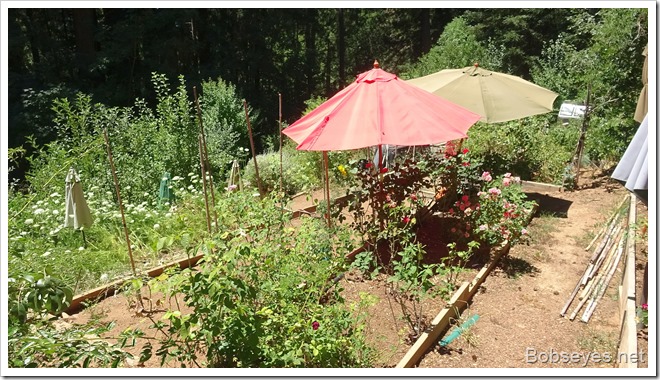 Here’s his redwood hot tub that has dried out and fallen apart just to give an example of what I mean about things falling apart. 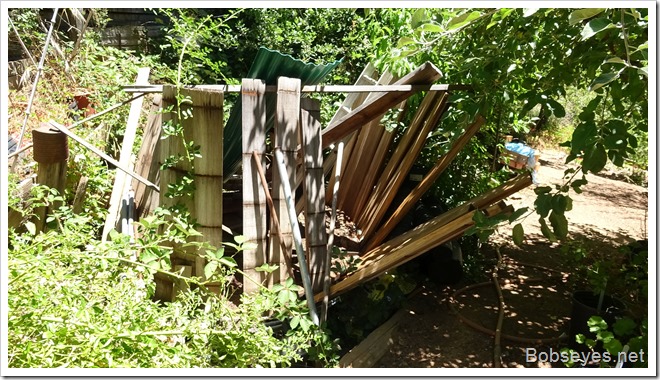 Where ever I looked it was the same, what he had built in his younger years was mostly falling apart now that he was too old to take care of things anymore, so it makes me wonder about how important people think what ever they are doing is really important, or not.

Things that are important to people eventually have to be let go, no matter what.

When one is younger and can still do stuff, lots of things seem real important to do, but as one ages and can’t do much anymore, just how important was the thing in the first place?

Just  my reflections as I know how important all those things are to people, but should they be and that’s the question. I know what most people’s answer to that would be, but should it be. :O)

Anyway even though he wasn’t home the reflections were good and I was on my way to Pond Farm about a half mile from his house. 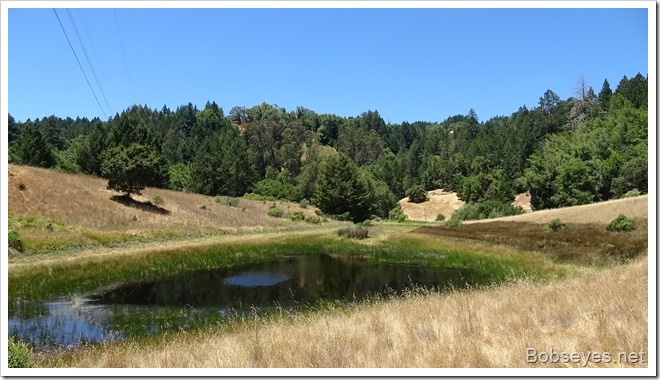 There were a couple mallard ducks resting on the shore there that kept and eye on me but didn’t fly off. 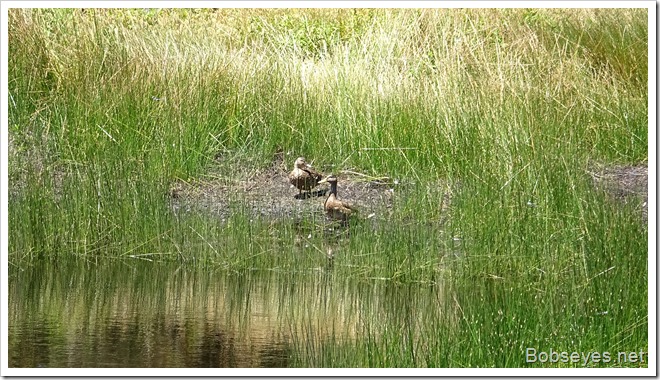 I headed up to were the pottery school used to be you can see the house there barely. 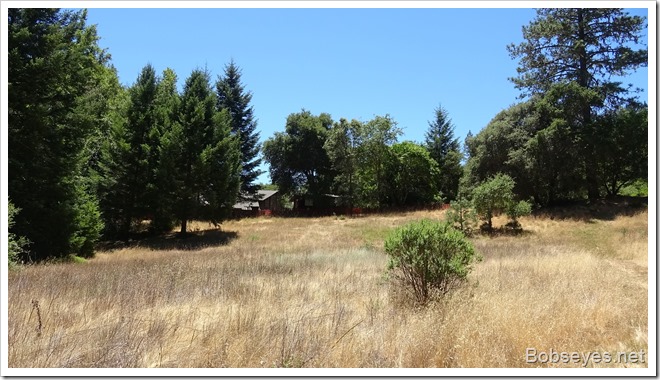 This is the lady that made the farm famous.  I used to know her as a kid and the hermit was one of her students. 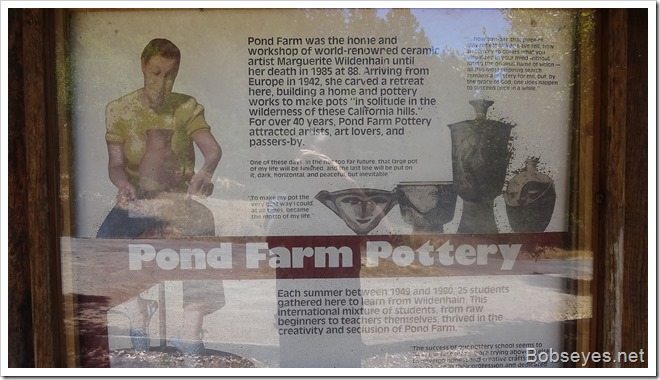 Headed back down the hill

This is where I went through as I headed down the hill. 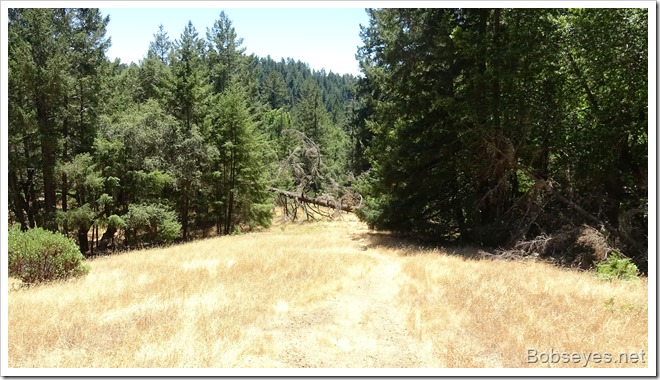 And through this area which leads back into the redwood part of the park. 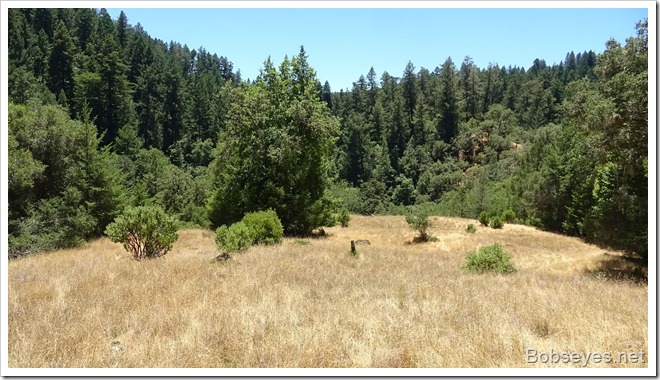 Almost home as I go through the redwoods and down the road. 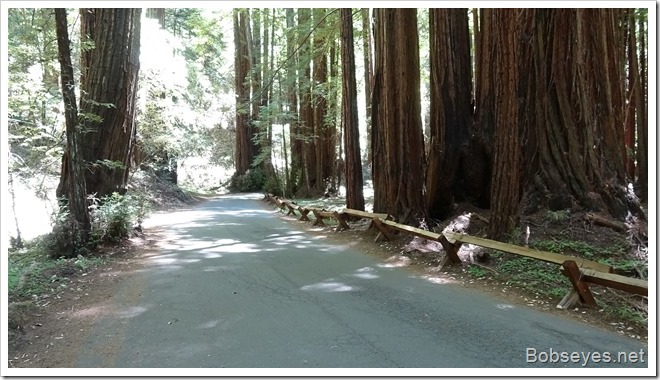 Once I was back at the house I was beat so a good nap was in order.

Getting my smoker going

After the nap, I puttered around the yard mostly. I did look at my BBQ smoker I made to see about moving it out front so I can use it again. I found I’ll have to do some work on it before I can move it and use it again.

Late in the day I received an email from Marty. He informed me that there was a huge fire in Nevada near where we are planning to go next week and was wondering if it would be in our way. It’s called the Martin Fire and has burned almost a half million acres so far which is a lot.

So it depends on what it does. Right now it looks like it will be north of us, but that could change so we’ll keep an eye on it. It might be a smoky trip.