A Hike In the Forest, a Sore Leg, and Rat Control, Does It Work

My brother Tom told me this morning that my main gate was hitting hard and seemed to be out of adjustment. I got the manual out and looked up how to set it up properly. 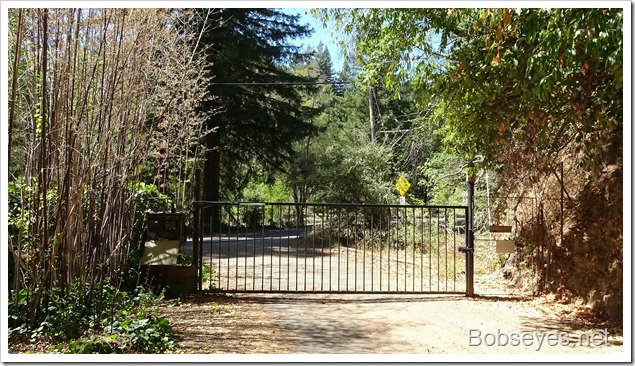 It was fairly simple once I read the directions. Just pushed a couple of buttons and that should do it. I’ll test it out in the next few days to see if it’s just right or not. 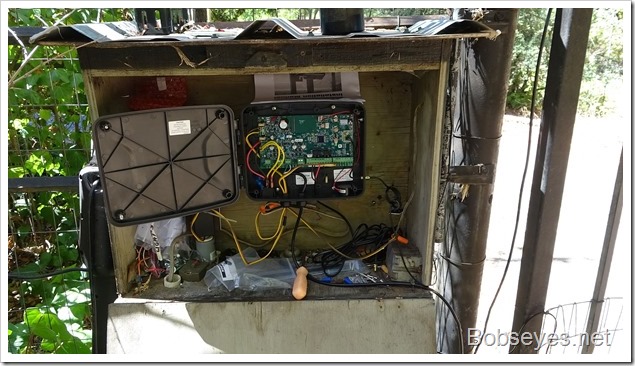 Going for a ride and a hike in the forest

A bit later in the day I rode the bike up into the hills for a ride around the place.

I cut this big tree out of the road yesterday but during the night it rolled down the hill and back on the road knocking down that little tree so I couldn’t get by so I turned around and went another way. I suspected it might do that. At least it waited until I got out of the area. 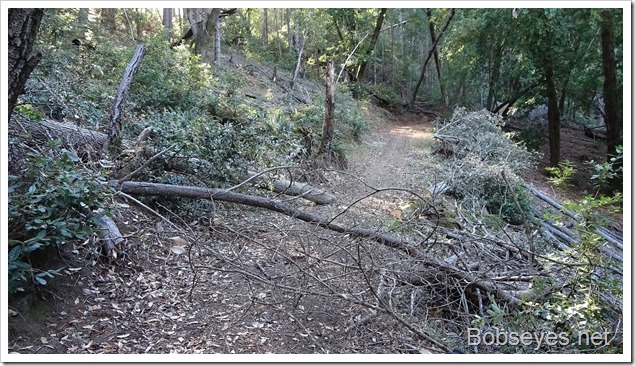 Hiking and fell down here

I wanted to do some hiking around the forest to do some exploring so I parked the bike and took off on foot to his area. I was doing ok but then my foot slipped on some loose leaves and I started to fall backwards. I tried to stop that action but in the process I felt my left leg big muscle getting ready to tear or something so I did the back fall which was ok, except during the process I sure felt something rip in my leg. Ouch. 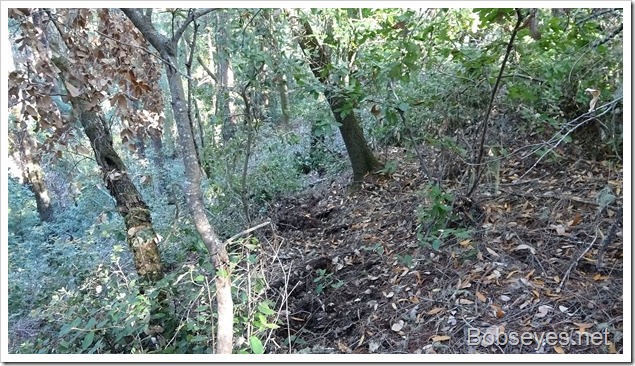 I wasn’t sure  how bad my leg was going to be, but I did know it hurt a bit as I got up. Nothing to do except start the trek back out about a half mile through this kind of stuff. 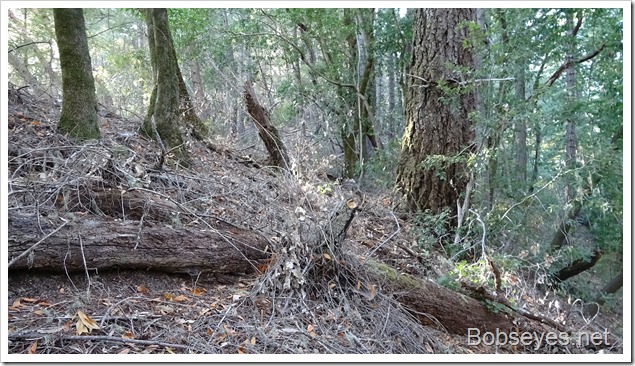 I made it back to the bike and rested up there for awhile finding a nice spot to sit on the ground.

Eventually I had to get up and I wasn’t sure how that was going to be. I had to be careful and it hurt pretty good, especially getting my leg over the bike seat.

I made it home and sat down and Kitty Kat came by to say hi. 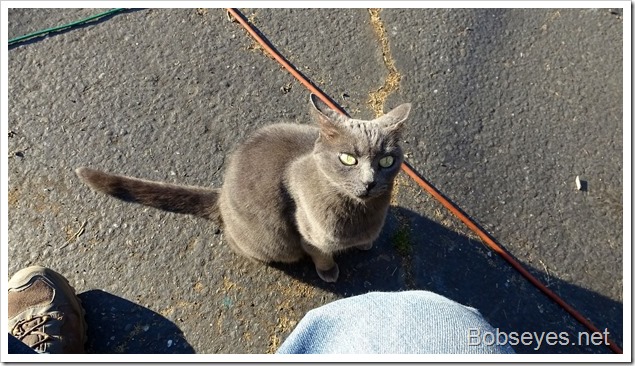 It feels like I’ll be nursing that muscle for some time. I’ll just add it to all the other things that hurt. Older age is just great, with lots of aches and pains.

Last night I mixed some baking soda up with ground oats and barley and it wasn’t long before the rats were in it. I’m not sure just how many rats came to eat last night but they worked on it all night. I think more new rats came as the night progressed. Rats have picking orders so when one group came the other group  might leave, depending on the picking order. I could tell when new rats showed up as they were real couscous compared to the rats that where there before them. 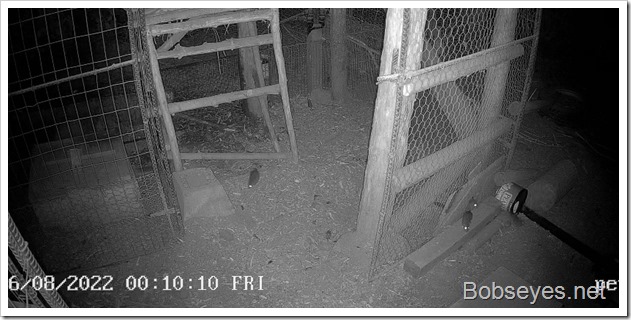 They came and went all night until about five in the morning. 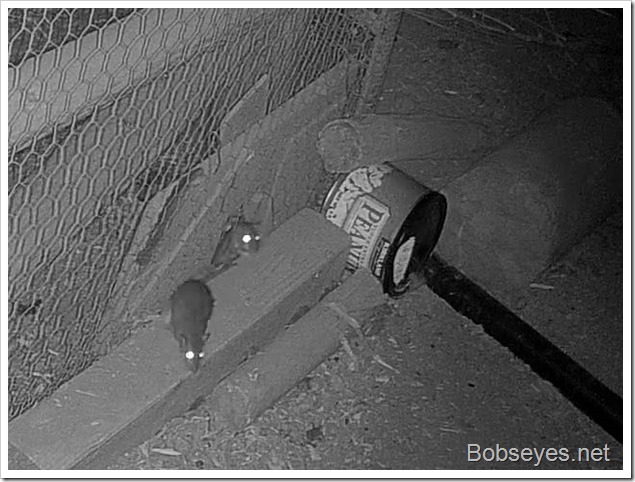 Most of them weren’t afraid to dive right into the bait can. 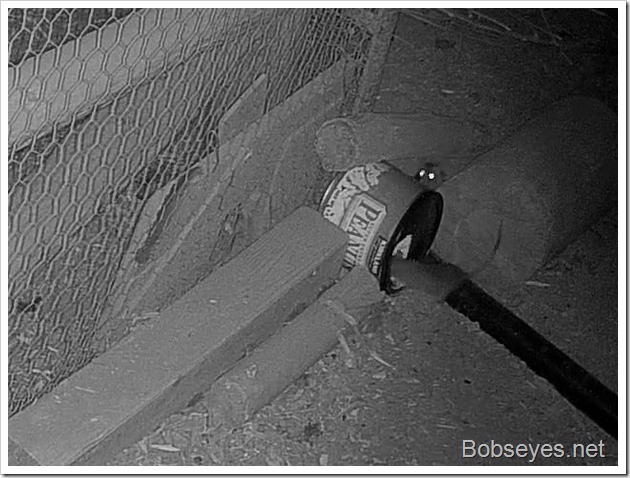 So, tonight I mixed up some more bait and put it out to see what would happen. 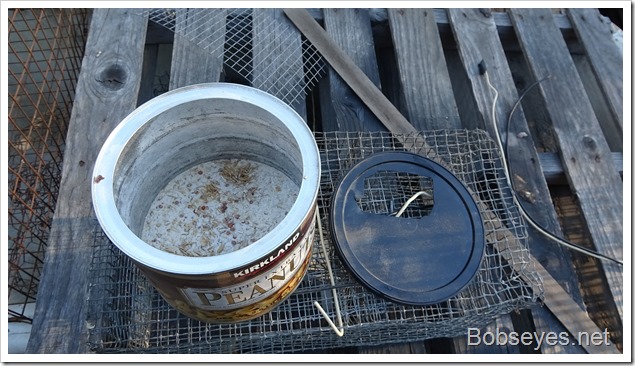 There were rats that came fairly early and are still working on the bait.

Now, what I’m wondering is did any rats die last night? That’s the big question and the YouTube guy or anyone else on YouTube haven’t proved this stuff works, so far. And the guy that said it does work still has lots of rats so I’m skeptical.

All I can do is put out more bait and watch to see if I can figure out what might be happening.

I know the plaster of Paris works

If this doesn’t look like it’s doing the job, I’ll go back to using the plaster of Paris as I know that will work as soon as they digest it. And if the baking soda works and blows them up it should do that on the first night too. So are these just new rats showing up or maybe rats that only ate a little last night.

I can’t tell for sure but it seems like there may be fewer of them tonight, maybe. :O)

4 Responses to A Hike In the Forest, a Sore Leg, and Rat Control, Does It Work