A Fun and Good for Me Dirt Bike Ride With Barry

Once I got it going today I noticed there were no showers for now. I went out and did the chicken stuff and came back in the house and had my big meal of the day. I eat most of my stuff early in the day so when the corned stuff gets me it’s more in the day and I have a better chance of getting some sleep at night.

Just as I was finishing up I noticed my brother Barry’s truck parked out front so I went out to see what he was up to. He had his dirt bike unloaded and I was thinking of going for a ride today so I joined him with my brother Mike’s bike that could use a good battery change which means a good ride.

Up into the hills we ride

We took off across the road and up into the hills and stopped here at the Guerneville view point for a bit. That’s water haze you see out there from the recent rains. 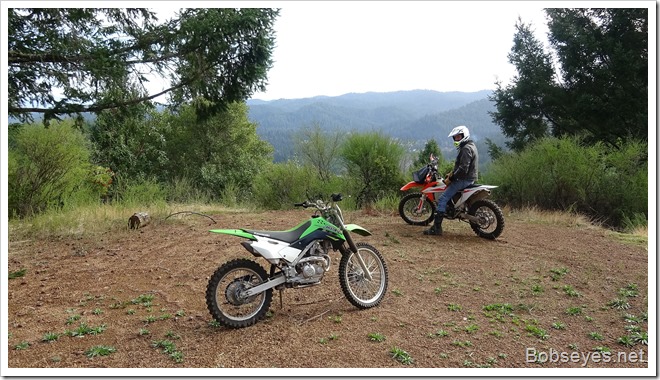 And that’s the little town of Guerneville which is by the Russian River. 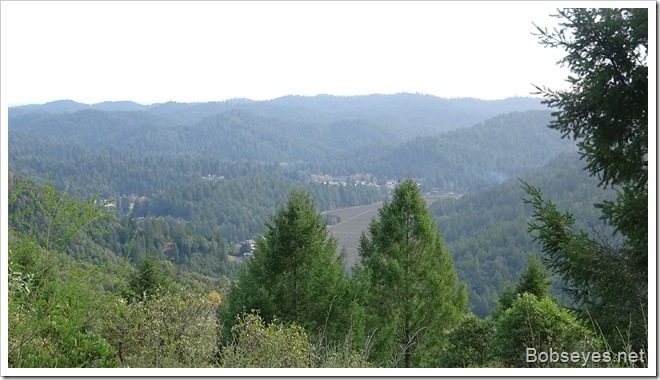 From there we rode here and there around in some circles and we stopped at this spot which is called the Top of the World. 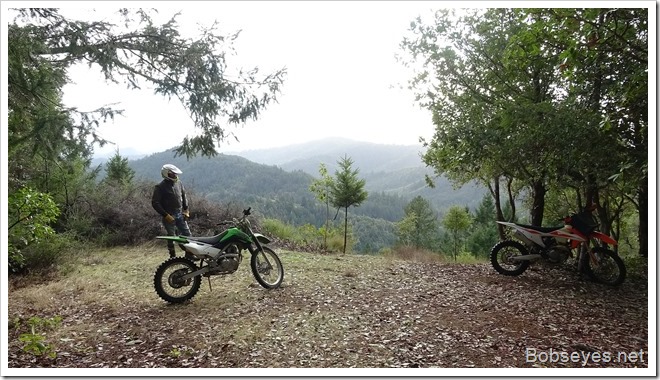 Here’s the view of the world from there looking southwest I’d say. The ocean would be over to the right  just over these hills. 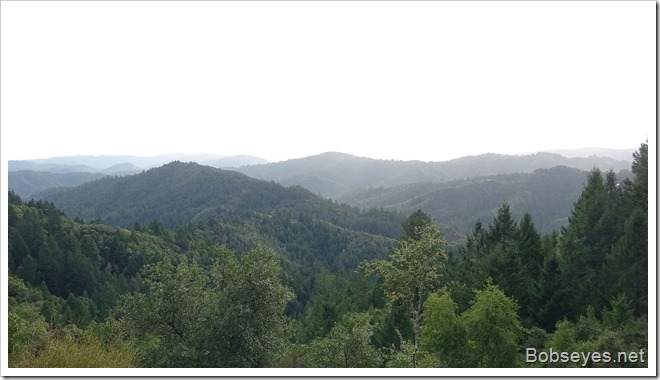 Back to the top

We rode around some more, the bikes cover a lot of road fairly fast with lots of ups and downs which really gives one a good ride. We rode for a bit over an hour which seemed like all day and ended back here at the top of the world. Barry’s getting his gloves on and we are about to depart back to my house after one more short ride. 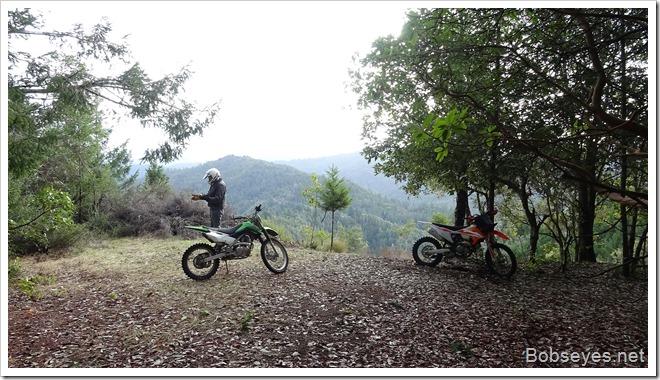 We went up this road so Barry could check for wild mushrooms as this is a good spot, but he didn’t find any, too early yet I think. Mounting up and taking off. 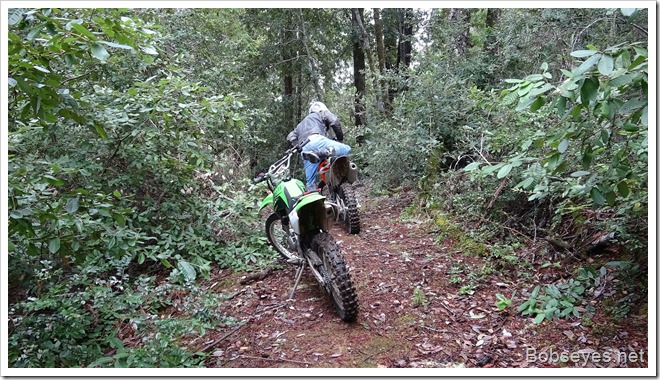 On the way back Barry wanted to go on some even steeper stuff so he left to do it and I stopped at my other brother Tom’s garden to see what there  might be to eat. 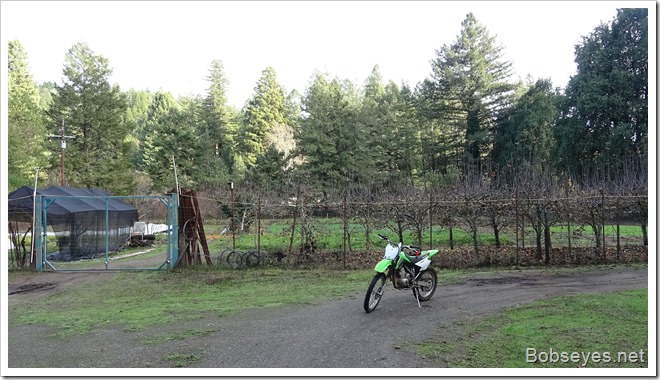 This is mostly garlic and maybe some onions too. 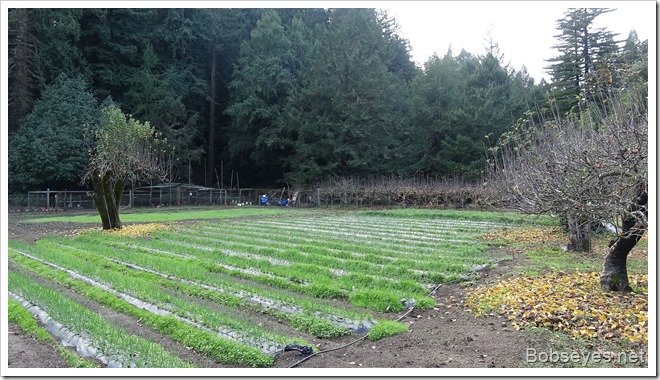 The carrot patch looked like he’d been harvesting in it so I dug one up, this one.  I found a faucet and washed it off. Sweet and crunchy, just right. 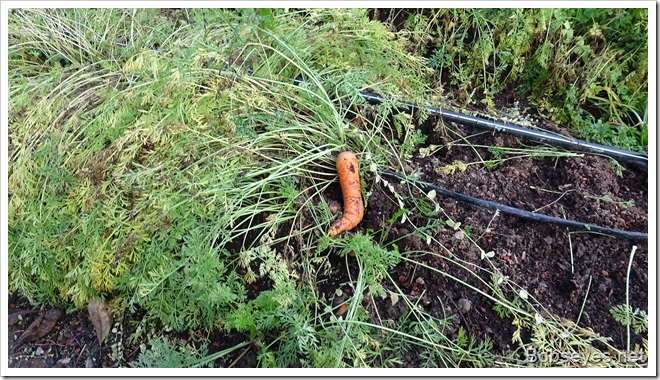 From there I headed for home across the road and put the bike away.

That was a good way to spend most of the day. Riding a dirt bike in the hills really limbers up an old body which must be good for me, eh.

Later in the day I was walking through the dormant raspberry patch where I let the chickens graze and they all came up to me thinking I might have something for them which I didn’t. 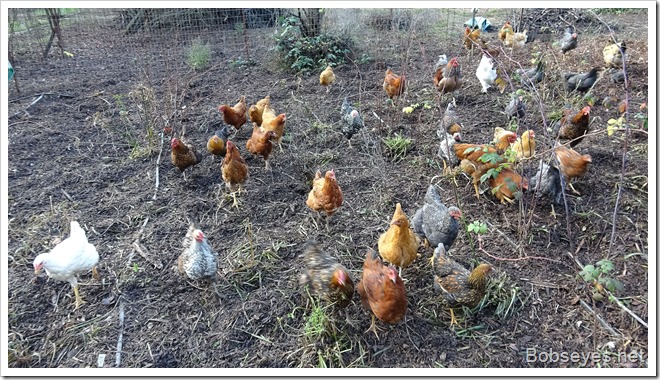 Just before dark we got a couple of light rain showers and then the day was over.

Nice day getting some exercise and having some fun too.