A Dewy Day Slows Down My Repair Projects

Too damp and wet to get started

My plan today was to do some work on the Toyota’s new gas tank mount and get the van’s belly pan bolted back on the van.

I went outside about 11:30 thinking the sun would be up and things would be warmed up a bit, but I was wrong. The sun was behind some big redwood trees and where I wanted to work was all dewy, meaning things were all wet and would stay that way until the sun came out from behind the big trees, not for awhile yet.

Waiting on the sun

I was cold so I went back in the house to wait for the sun to shine on things.

Prepping the car for a trip to SF

I also had to get my car ready for a trip down to San Francisco VA later tonight so I checked the fluids and removed my kayak from the car and put some sleeping stuff in the back of the car.

By this time the sun was starting to come into my work area so I took a break then went out to see if I could accomplish anything.

When I got my camera out the lens fogged up right away so I couldn’t take any pictures for a bit. I put the camera in the sun and eventually took this one of the new hose on the gas tank. 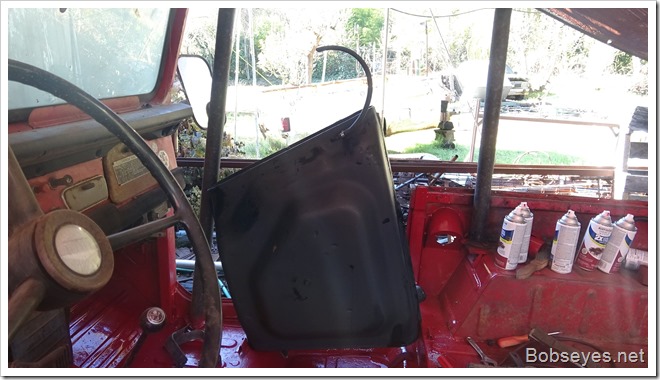 I was then able to attach the mounting straps. 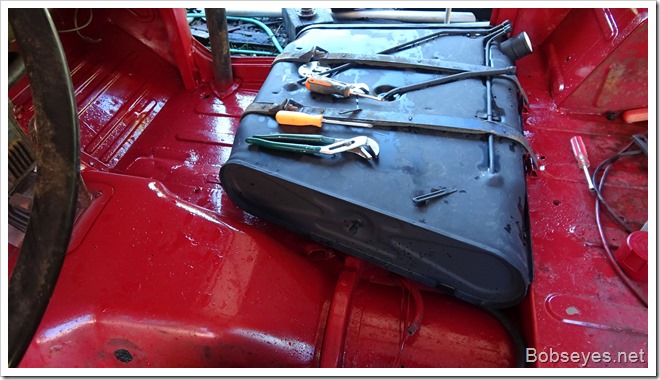 Bolting the belly pan back on the van

Once the straps where tightened up I could see the sun wasn’t going to last much more than an hour, so I put that job aside as I wanted to get the van’s belly pan bolted back on the fan. It’s a fairly easy job, but one I don’t really like to do.

Here’s the pan that bolts under the van in front of the radiator. 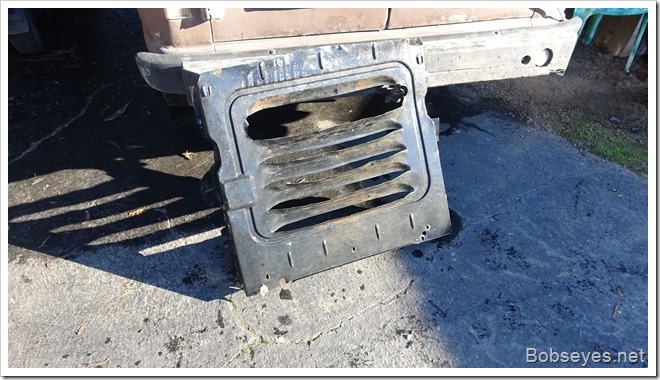 Rework slowed me down

I had about half the bolts in when I realized I had a flange stuck on the wrong side of the pan, so had to unbolt things and start over paying closer attention to things this time. My fifteen minute job turned into an hour job and the sun went down too as I was finishing up, but I got  er done.

Clean sweep of the fridge stuff

I’d been looking at all the jars in my fridge of stuff that was old and I  can’t eat anyway because of corned stuff, like the vinegar in pickles mostly come from corn.

So I needed to get rid of all those things. I decided to take them all out to my enclosed garden and use it all for fertilizer, so I gathered them all up and hauled them out to the garden.  I’d say about fifteen jars. I unscrewed the caps and dumped the stuff in the garden around my plants and covered things up with some redwood mulch.

I decided to just leave the jars in the garden for now to let nature clean them up a bit. I thought that might be easier than dealing with them as dirty as they are now.

By now I was cold so went back in the house for the rest of the day.

That was my day for a cool one.  Cool around here is about 5o degrees F. today, not really that bad but with the dew it was penetrating.