A dental appointment, but first some boating

I heard the county guys were going to open the river’s mouth on Monday, today. I had a dental appointment at two so I thought I’d just go down to the Jenner overlook and watch them do it. When they take out the mouth, there’s a lot of agencies present, biologists, fish and game and others, so it’s a good time to shoot the bull with some of them that I don’t see very often.

But as I was driving though Monte Rio, I saw Darwin’s truck and boat trailer in the parking lot at Monte Rio. That wouldn’t be unless the mouth of the river was open at Jenner so I detoured and pulled into the Monte Rio boat ramp to have a look at the river to see if the river’s mouth was open or closed.

Appears the river’s mouth is open

Here’s the boat ramp and the river level shows the mouth is open, so maybe it opened by itself, as the county guys that open it don’t usually work on weekends. The sun was just starting to come in here so it was still a bit cold. 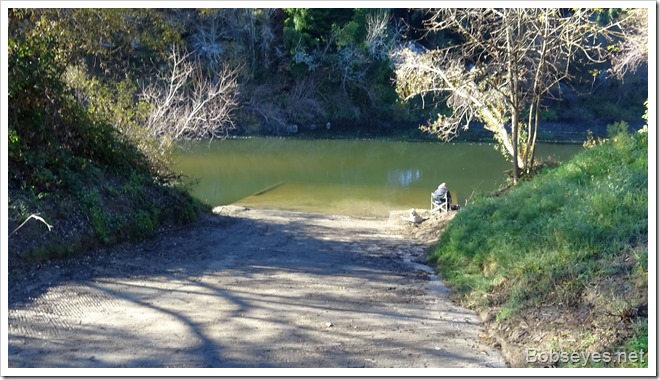 So I parked and went down to chat with Bill fishing on the chair. Turns out the county guys did work on weekends for the first time and opened it on Saturday and it washed out on Sunday. They have to open the river’s mouth as it can flood highway 1 at Jenner and it was just about to do that.

Ok so plans changed. I had a couple hours to kill before I needed to be in Forestville for my dental appointment, so I backed my car down the ramp and put the boat in the water.

As I was leaving the ramp a fishing boat pulled in so I shot the bull with them for a bit before heading down river. 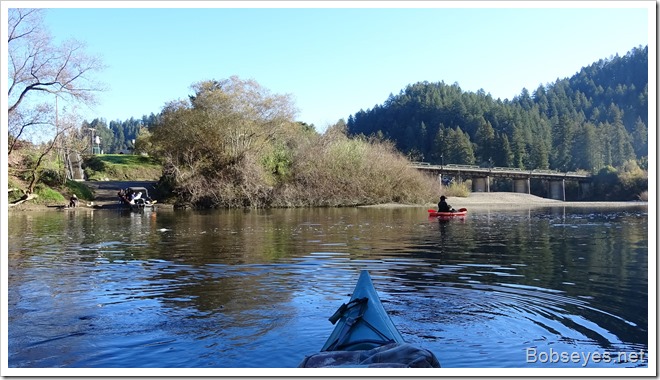 Two boats in the slot

As I headed down the river I could see two boats in the slot a favorite fishing spot for some of the fishermen. 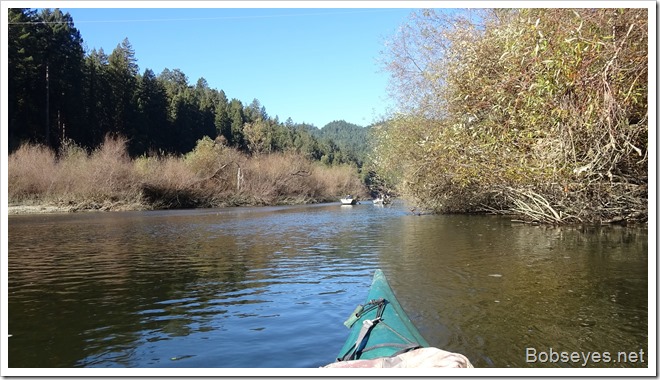 I pulled in beside the boats and stopped in some weeds to keep my boat from drifting down river in the current. 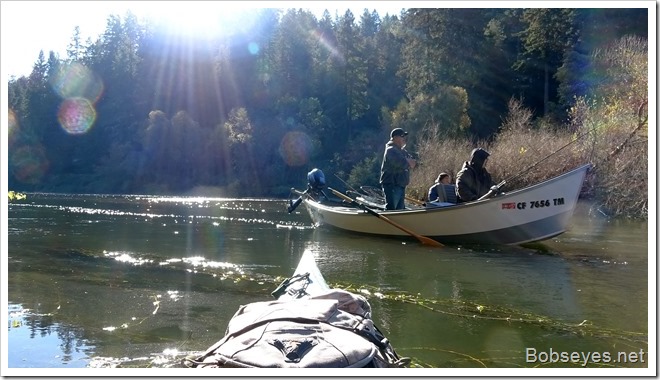 Shooting the bull with the steelhead fishermen

I didn’t have much time today so I wasn’t planning on going down the river very far so I shot the bull with them for a good while. The fishing was slow as it’s still early for steelhead and fishermen always like to shoot the bull. :O) 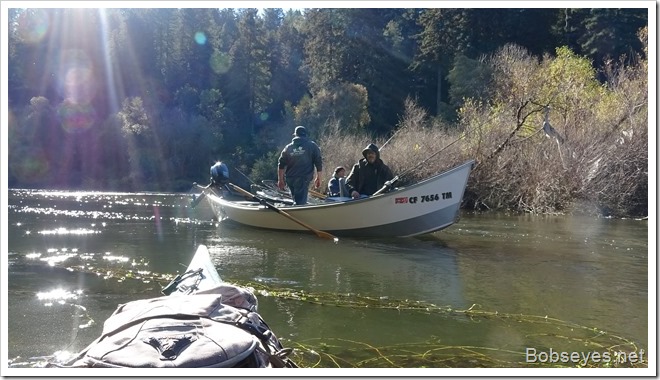 Eventually one of the boats decided to drift down the river a bit so I was thinking of following just down to there. 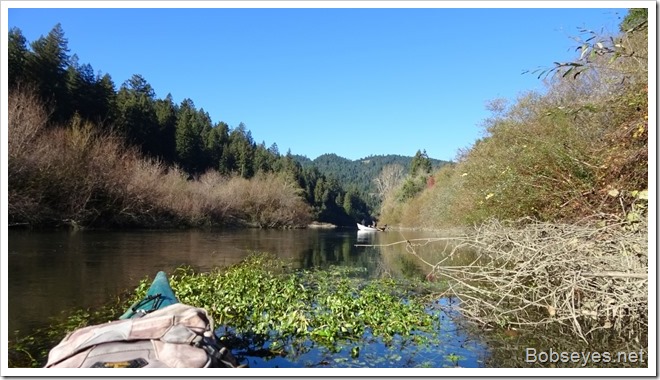 I followed them down there and watched for a bit. The sun was out nice now so it warmed up a bit. 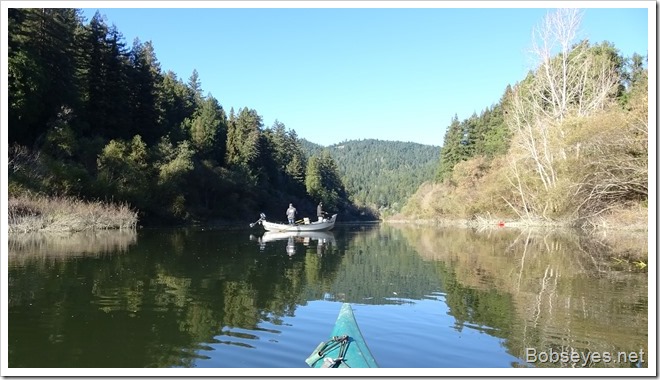 I only stayed a short time then headed back up the river going by this grebe. This is the first time I’ve seen this type of grebe in the Monte Rio area. There are a number of these grebe that winter over in the Jenner area. 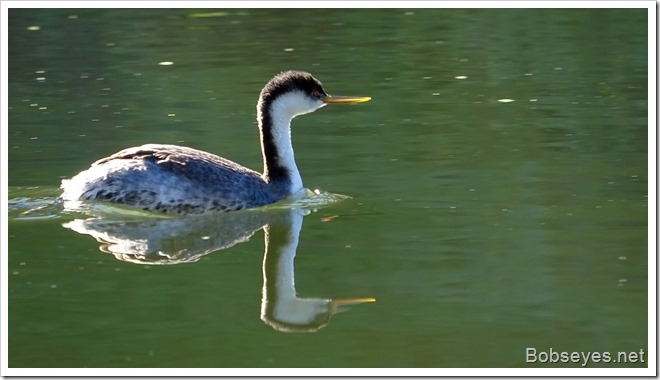 This was my view as I headed back up the river towards Monte Rio. 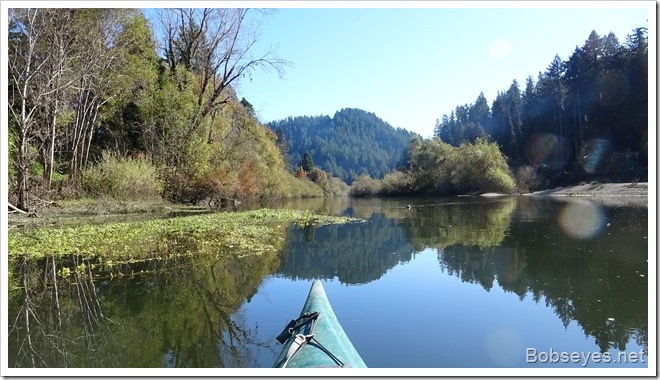 I made it back to the ramp, pulled my boat out and went to the store in Guerneville to do a bit of shopping as I still had a short time before my appointment. 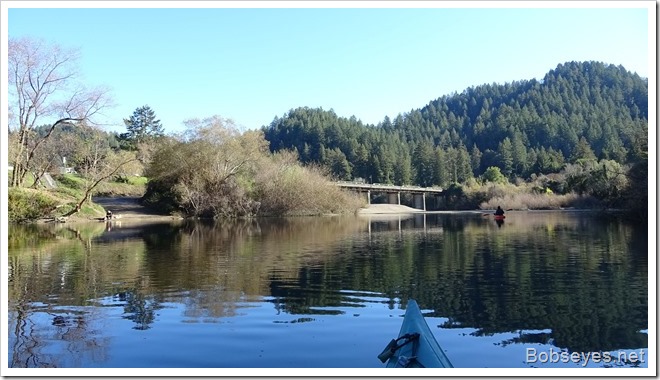 I went on home to put the groceries away and then headed on over to Forestville about a half hour drive.

Shooting the bull with the dental people

My hygienist is from the Casini Ranch which is down the river from Monte Rio. I’ve made it a practice to make sure my doctor types know who I am, so I always make it a point to shoot the bull with them as I want to make sure they know who they are working on and I’m not just another patient.

The dental assistant once told me, wow, you are more fun than most patients as most seem scared to death of them and don’t say a word.

More fun for the both of us

Needless to say, I always get special treatment. It’s more fun for me and for them too.

When I was paying my bill the receptionist mentioned she was interested in the lumens at Jenner of which I seem to be an expert on, so I gave her my blog address and told her how to search for those posts on my blog. I started to leave and remembered we hadn’t made a new appointment for the next time cause we were shooting the bull.

That done I went on home for the day. The sun was already behind the mountains to my west and it was cool out so I went in the house for a nap and that was my day.