Headed to the river

The plan for the day was to go down to Jenner to kayak for the day. The river’s mouth was closed up from the high waves blowing sand into it so the estuary water level would be high. High enough that I figured they might be taking the dam plug out with an excavator today.

As I approached Jenner I could see the mouth was open and it was real windy out so I drove on through Jenner to the overlook at the mouth overlooking the ocean.

Here’s what the view looked like from the overlook. You can see the river is flowing into the ocean because the county guys had been there earlier and dug a channel for the water to open up the mouth. 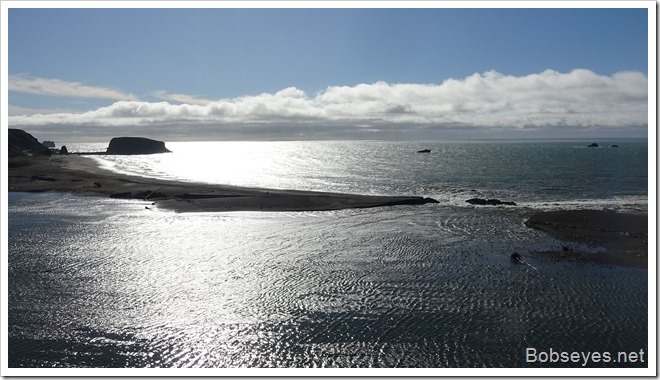 It will continue to widen and open up further as the high water flows through it. An open mouth means the spawning steelhead can get into the river now.

There’s some harbor seals and some birds resting on the beach on the right side of the open mouth. 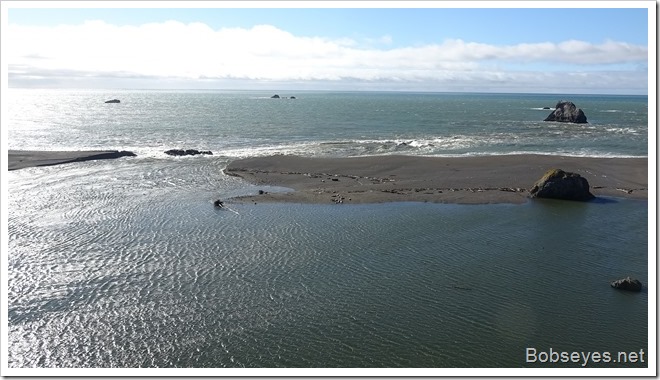 The county guys scare most of the seals away with their equipment for a short time otherwise there’d be a couple hundred of them here which there will be in a short time. 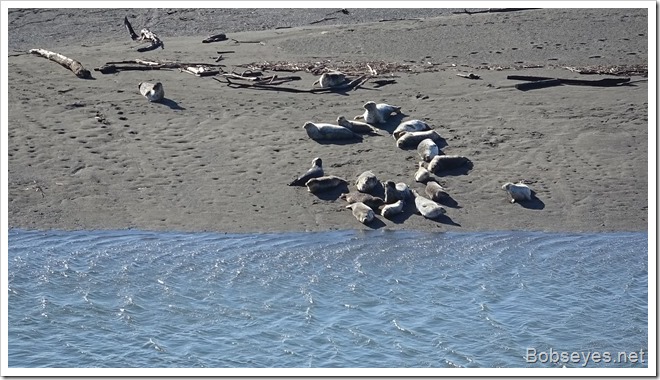 And some seagulls taking it easy. 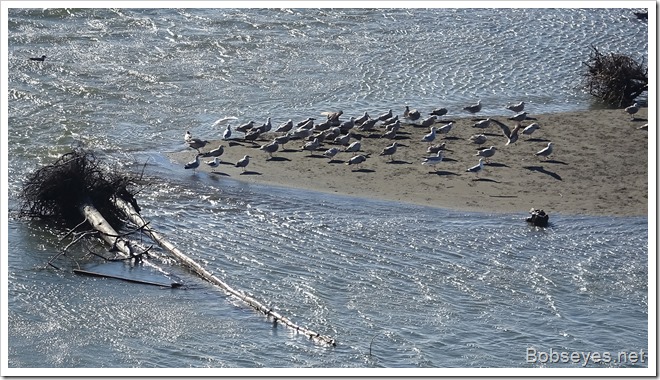 Looking up the river from the overlook. It looked a bit windy and it was cold coming off the ocean. 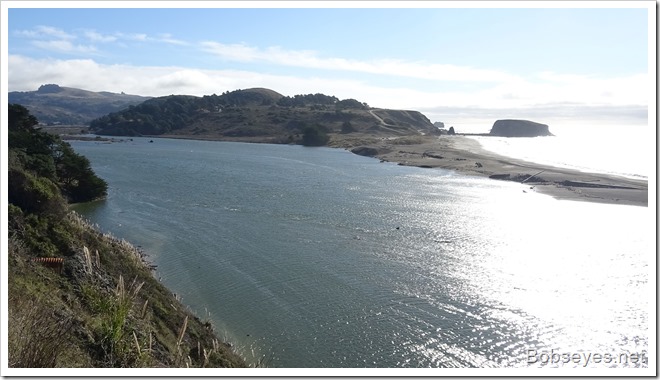 That didn’t seem like good conditions for a nice yak. I drove back to the visitor’s center where the boat ramp was.

The wood on the ramp shows how high the water was before the mouth got opened a couple hours ago. 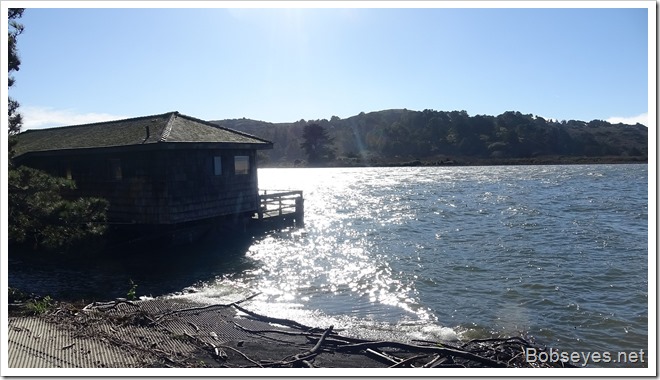 I looked off the deck of the visitors center where it was cold and windy so back in the car for me. 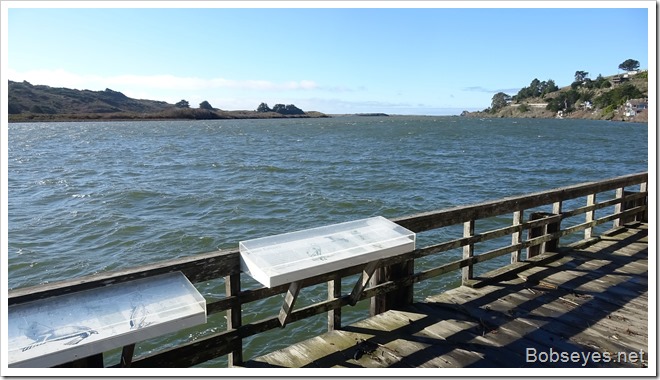 I drove back to Monte Rio to see if there was any fishing going on. There were some guys fishing from shore but no one in boats. 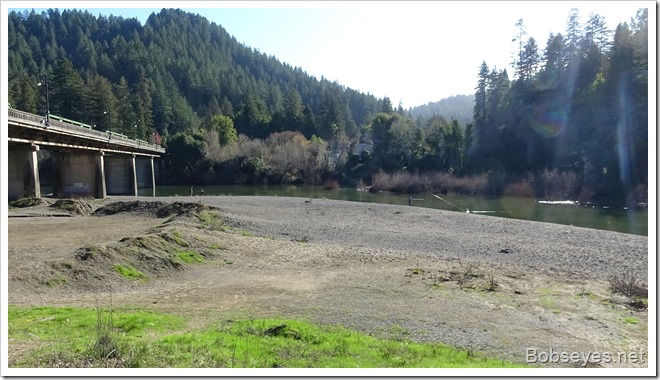 I chatted with these two guys for a spell at the boat ramp. No one had caught anything. 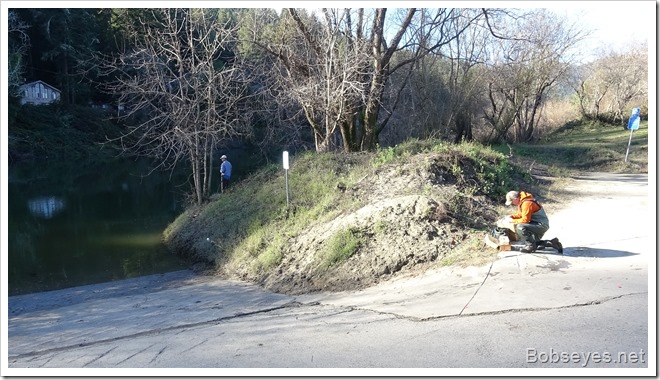 When I was walking by this truck I said hi and started shooting the bull with  Tom for quite some time. He’s the guy sitting on the back tailgate. 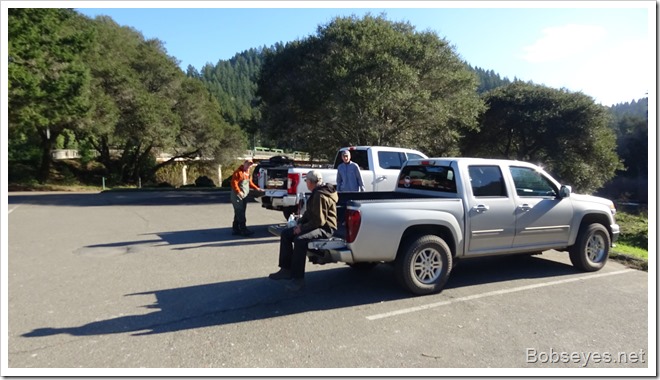 After that I drove back to Guerneville and drove up to John and Cheryl’s place to shoot the bull some more. John wasn’t home so I talked with his wife until he showed up from a walk downtown.

He’s a fisherman so we shot the bull for quite some time, about fish and rats and stuff. Seems the rats are taking over just about everywhere around here. I think it has a lot to do with all the people putting up bird feeders. The birds knock feed on the ground and during the night the rodents have their way with the feed.

But we need lots of beaver

Of course I gave all the fishermen my Get the Beaver Back spiel. I wonder if I shoot the bull with enough fishermen about no beaver I can get the fire lit to start the process of getting this very important resource back into our water systems. Nothing the biologists can do would come even close to what the beaver can do for fish recovery. Beaver can go anywhere and make dams without permits on anyone’s property. They also cost very little and work 24/7. It’s a no brainer for anyone that thinks about it. :O) It’s also the key to the whole process to make it work. No key, no process.

It was getting late when I left John’s place and went on home for the day.

It was chilly when I got home so it was in the house and kick the stove up a notch or two and mostly stayed in the house for the rest of the day.

Nice day just going around and shooting the bull with fishermen.