A Bucket of Clay to the Spring at the Boonville Cabin

Headed out to the Booneville Cabin

The van was prepped and ready to go to Boonville when I got it going on Thursday.

All I  had to do was jump in and drive the just over two hours to Boonville. I arrived at Marty’s cabin but couldn’t find anyone around. His jeep was there so I knew he was around someplace not too far away as he’s too old to go very far these days. :O) 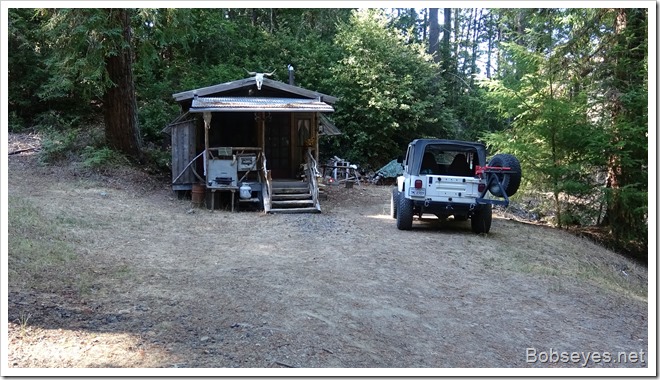 His generator was running so he likely walked someplace close by so as not to have to listen to the generator all day.

Here’s a view looking back at his camp area, but no Marty around. He almost has to be up on the trail just up from here. 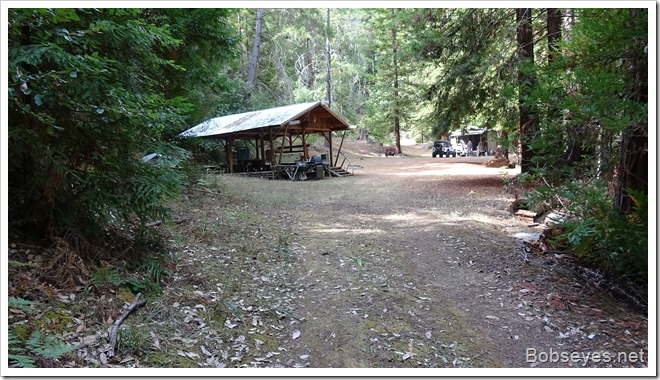 So I make my self at home and Marty came back to camp some time after 4PM and we shot the bull the rest of the day and made plans to get the bucket of clay up to where we need it as the spring  is up the hill.

So the next day after a slow start we first get the generator going again so it will continue charging  his battery while we are gone. 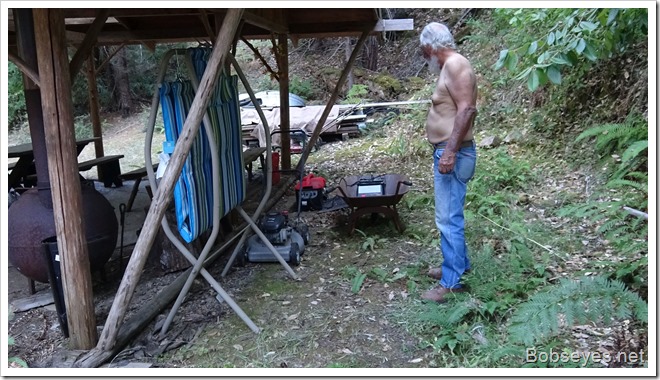 A bucket full of wet clay is real heavy. We can just barely move the bucket and we need to pack it up a trail to the spring, so we figure using this stick so we can both move it up the hill. 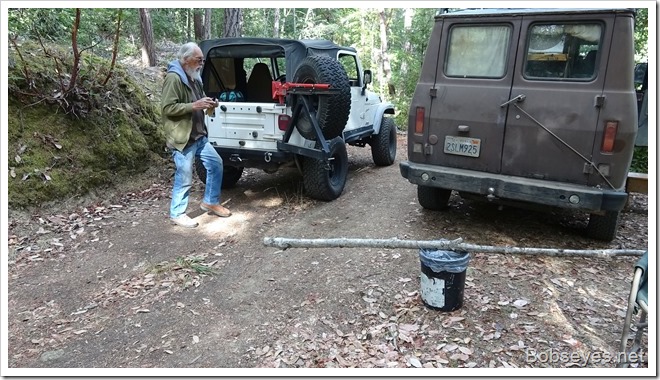 We load the bucket full of clay and some other materials we’ll need and drive up this road to the spring trail. 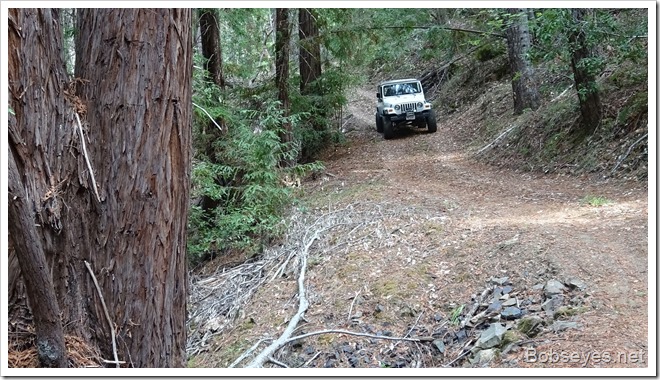 We hauled the heavy bucket a short distance up the trail to the first bench here where we had to rest and think about what we were trying to do. 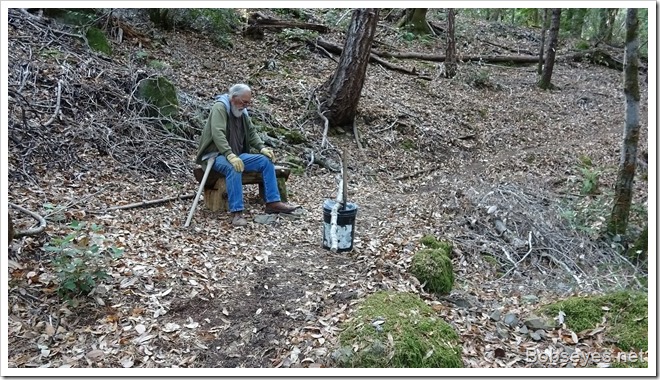 We decided a half bucket of clay would be a lot easier to haul up the hill so we dumped about half the clay out of the bucket. 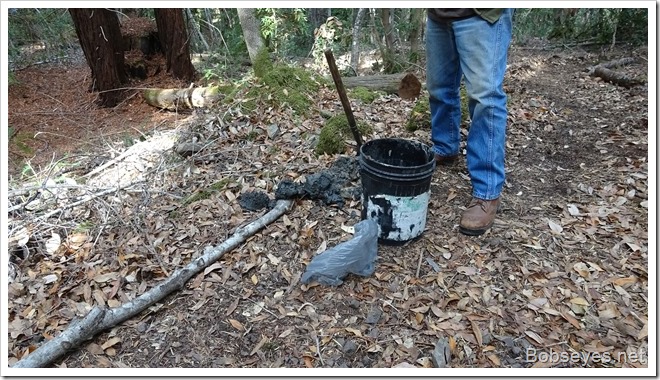 That made the clay hauling a lot easier. We’d haul the bucket up the hill a short distance and stop and take a break and we eventually got the bucket up to the spring.

Marty had told me he saw a bee nest on the ground the other day which we passed by. Apparently this hornet nest just fell out of the tree it was in and landed here. There were some black and white hornets coming and going so we didn’t mess with it. It’s about eighteen inches long. 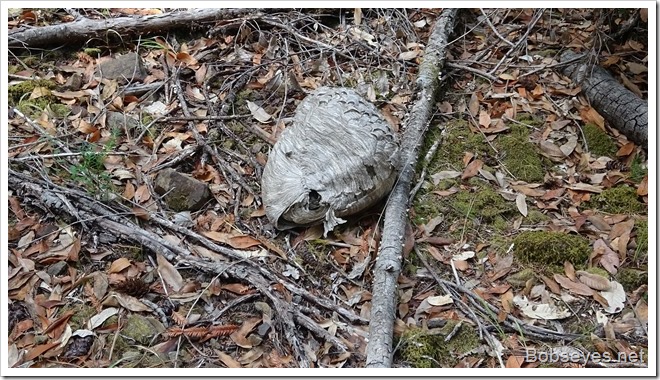 The trail was a little rough as it approached the spring where we had to work so Marty did some work on the trail so we could get by easier. 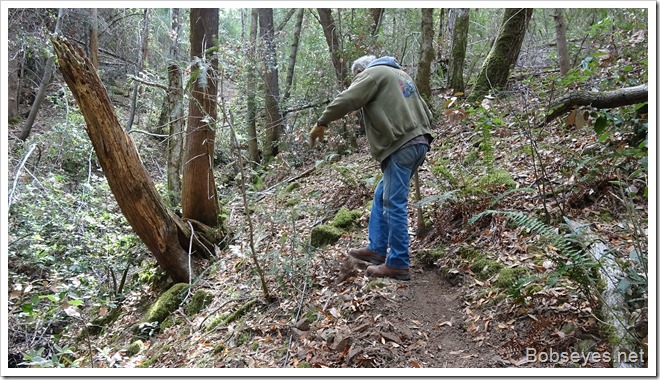 The spring is under the plastic in the rocks which I uncovered and applied the clay to make a better dam to collect the water. As it tuned out the  half bucket of clay was enough to do the job so we left the dumped out clay there on the trail. 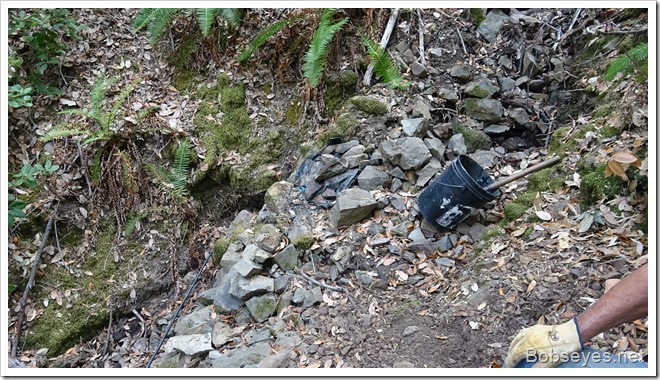 I buttoned up the spring and we sat down for a much needed break before heading back down the trail to the jeep.

I told Marty I’d walk down the road and took off before he got the jeep going headed down this road to the cabin. 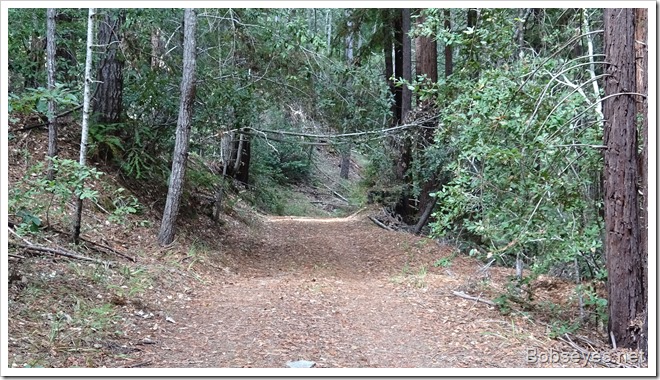 Shortly after we got back to the cabin Patti, Marty’s wife drove up. We visited for awhile.

I decided to cut this trip short as my body has been itching so much the last couple days, so I headed on home in the afternoon having accomplished my goal of getting the clay in the spring.

I was pretty tired out from not getting a good sleep because itching takes a lot of time and tends to keep you in the wake up state. I had to pull over several times on the way to let my eyes close so I could make it home. I did make it safely home.