Trail work in the KOFA

My plan was to spend Tuesday working on the Signal Peak trail in Queen’s Canyon in the Kofa.

So a couple hours before sunset I headed south on 95 to the Palm Canyon road and turned onto the Queen’s Canyon road.

I’m headed out the Queen’s Canyon road here and stopped for a little break. 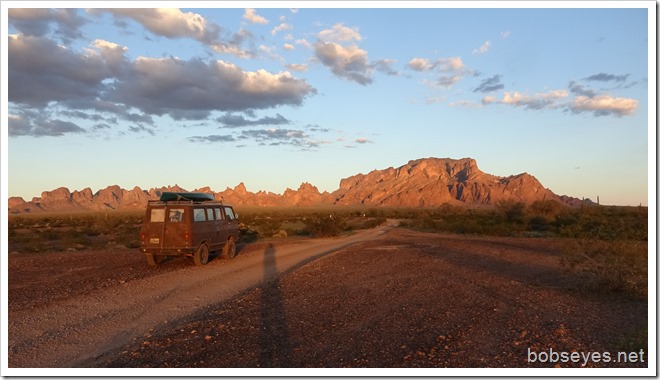 The road in is a slow four wheel drive road so I didn’t get too far before it started to get dark.

Wrong car for the road

Just past the camp spot Dan and I used a few weeks ago a two wheel drive car was in the road stuck at a bad wash out crossing. It wasn’t really stuck but they had to get it turned around. I was able to get around them and continue my trip.

I turned on my lights and continued on in past the Skull rock area about a mile and made camp at the head of Indian Canyon where the Signal Peak trail starts.

Here’s my camp spot and I plan to hike up the trail that goes up that canyon which is Indian Canyon. 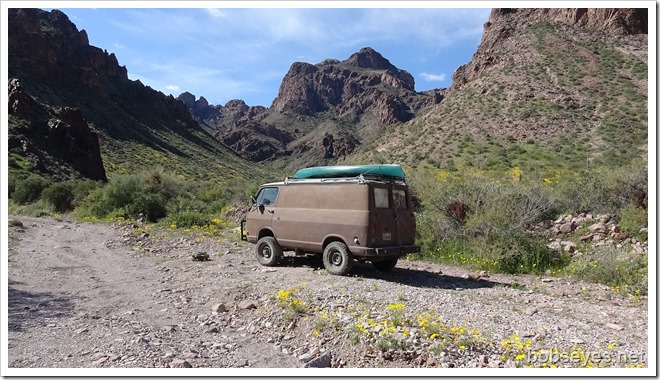 I took my time getting it going and was on the trail around 11 going through here headed up. 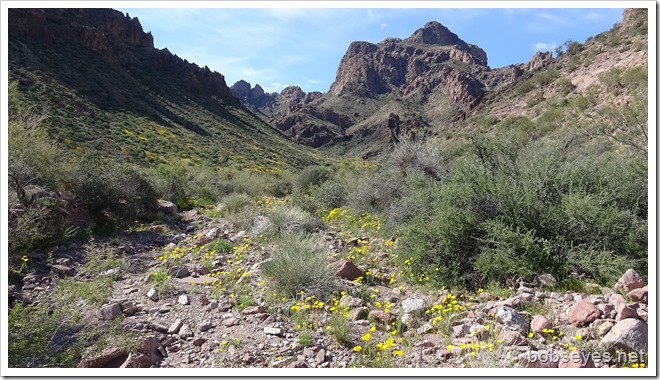 Wrong about the poppies

I thought the poppies would be on their last leg but I was wrong. With the recent rains last week more of them were in bloom and the orange colors were much darker. 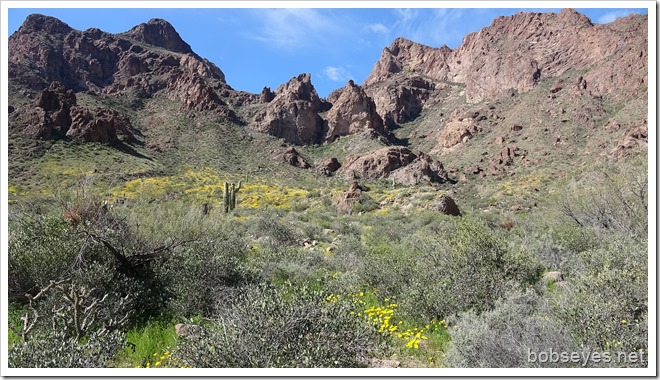 The trail goes right through here working it’s way up the hill. 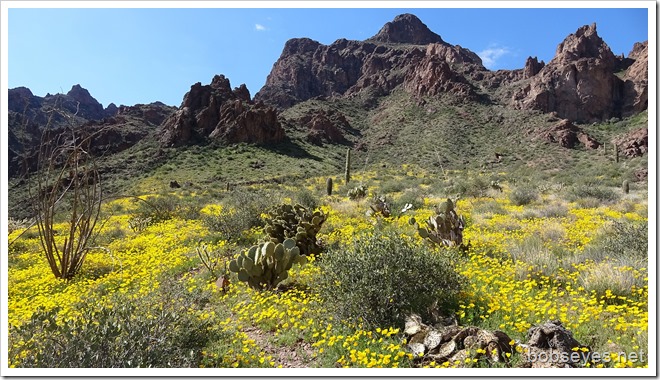 Eventually the trail got higher than the poppies and looked like this not really too steep. 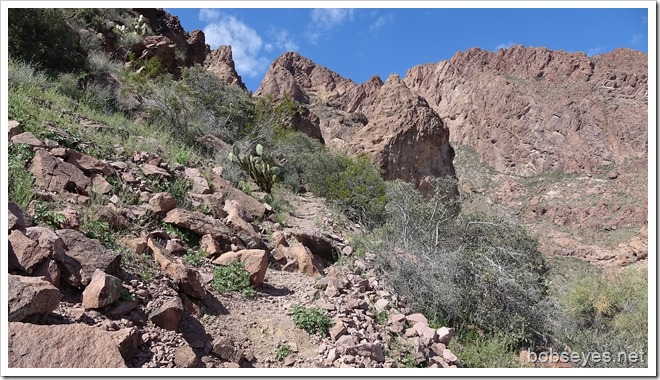 It was a bit hot in the sun for the first hour but then I moved in closer to the rock ridge on the left and was in the shade for the rest o f the way up to  where I wanted to do some trail work. 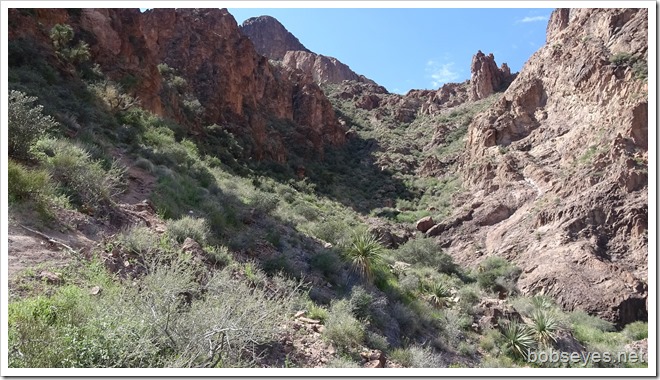 The trail comes up the right side here through the brush and that’s where I wanted to work removing some brush as it was over growing the trail making the trail impassible in this spot unless one does a bit of rock scrambling. 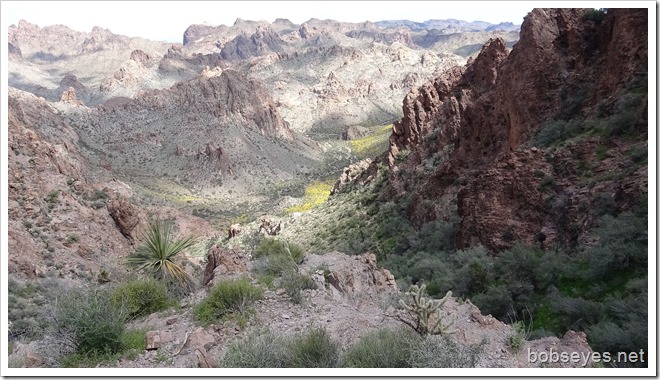 A bit of trail work

I brushed out the trail path going through here so now it’s easy to get through the brush without getting any thorns stuck in you. 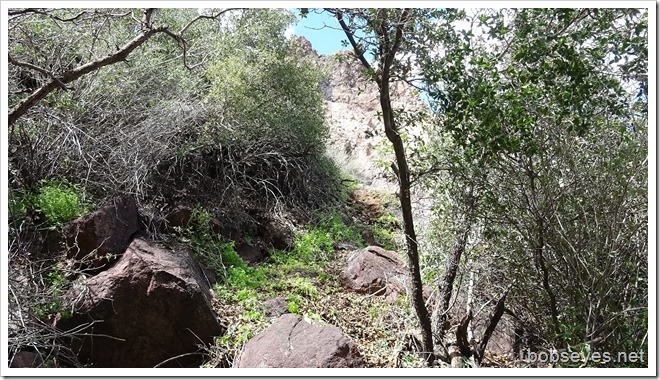 Because the brush had blocked the trail in this spot the trail goes all over the place as people found a way around the blocked trail so I needed to mark the newly brushed area so people would find it so I put up about six piles of rocks to mark the brushed trail. 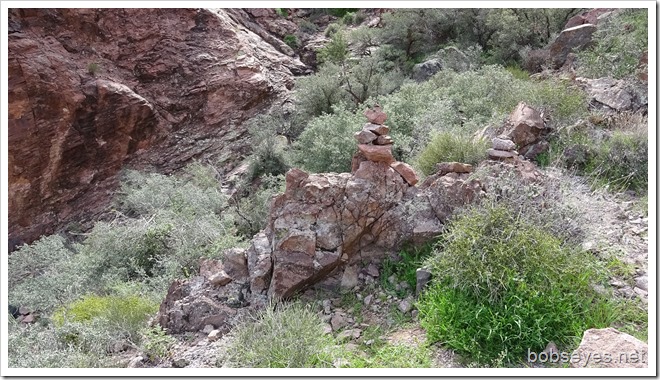 Heading back down the trail

I worked on the trail in this spot for about 2 and a half hours then took a break for a bit before starting back down the trail.

Can you see the trail as it winds through the poppies below? 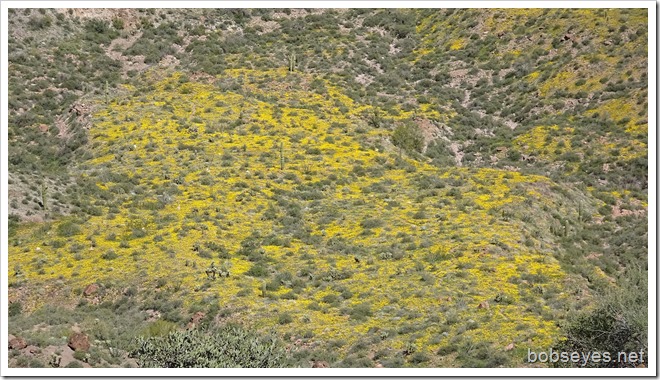 I took my time walking back on the trail as it was so lush. 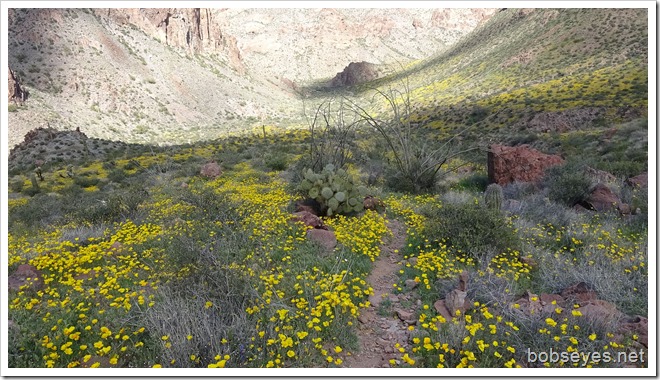 Spring is still early here and with as much water as this area has had things are just getting started so there will be much more to come as far as all the flowers. 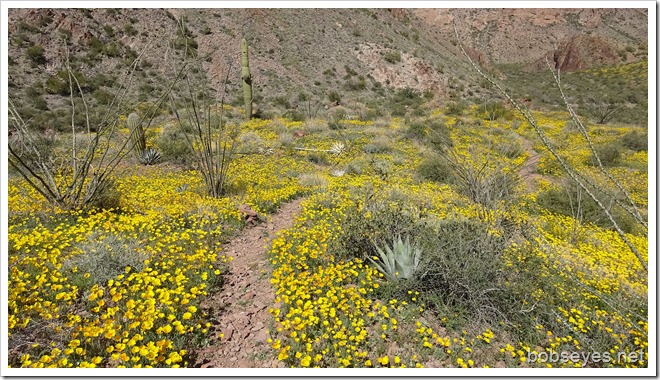 I stopped here to look back up the trail where I’d just been before returning to the van. 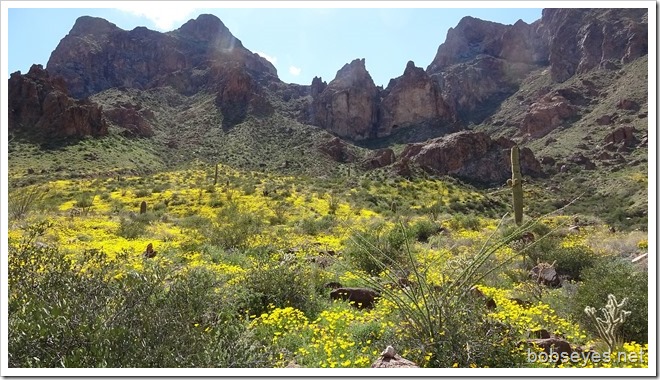 I made it back to the van where I took a long break and a good nap.

Drove out to camp

After that I started the slow drive out to the big parking lot at the road’s entrance where I had planned to camp.

But when I drove into the parking lot there was already a man and his wife there from the state of Washington. I shot the bull with them for a good while then drove down the road out a  little further and camped in the same spot Dan and I camped at a few weeks ago.

Wednesday Back to Quartzsite

I had a pleasant night there and took it easy until about noon the next morning when I continued on down the road out headed back to Quartzsite. I did some shopping and then went over to the library for some internet action. I was going to write this blog but felt more like a nap so that’s what happened.

Checking in with Marty

From there I drove on over to see how Marty was coming along with his bad back. His back isn’t so good and he’s arranging a way to get back home to his own doctors this weekend.

After a visit I drove over to my Sun Kiss road camp spot and had another nap and some dinner and that was my day for another nice one.