A Big Flare Up During the Night So Not Much Sleep

About midnight last night they issued another fire evacuation order but it was only a warning. Apparently a fire flared up during the night because the winds had picked up and it was out of control. It was to the north east of here so I thought it was fairly safe.

But with all the excitement figuring out what was going on I didn’t get much sleep last night so I was a bit slow getting it going today but that’s ok as I didn’t have much planned for the day.

I checked the gas in the dirt bike and headed up into the hills to see what the fire guys were doing today. It seems they replaced most of the big fire trucks with these pickups likely as they can get around better than the big trucks to put out spot fires from the recent burn. I stopped and chatted with the guys for  a bit. They were waiting for some tree fallers to arrive so they could get a big tree cut down to put out the fires that were burning inside the tree. 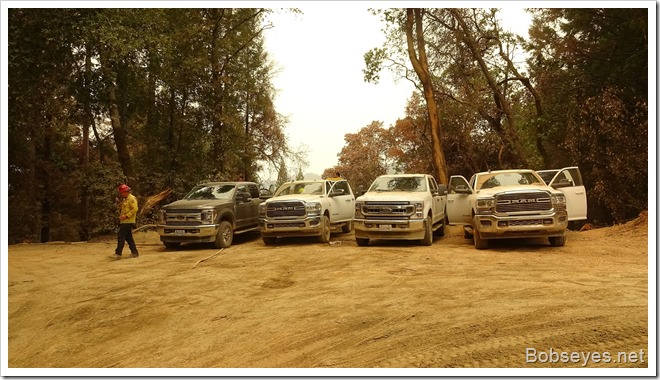 It wasn’t long before the tree fallers arrived so I took off to go see if Robert was home. 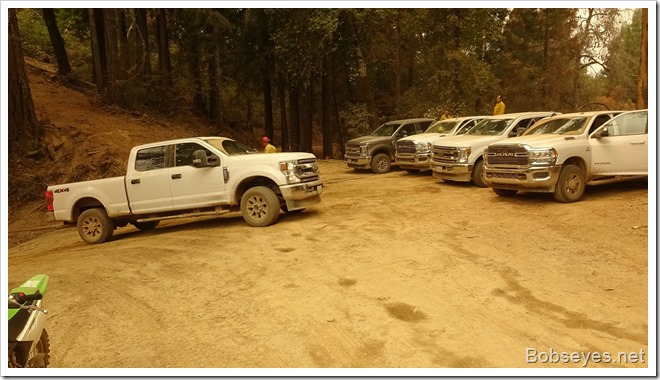 On the way to Robert’s place I rode by this nice overlook where you can see one of the places the fire burned though. Some of those browned out trees may come back with green leaves soon and some won’t. This part of the fire was slow burning so didn’t burn every thing in the forest up so should come back fairly well with lots of wild flowers in the spring. 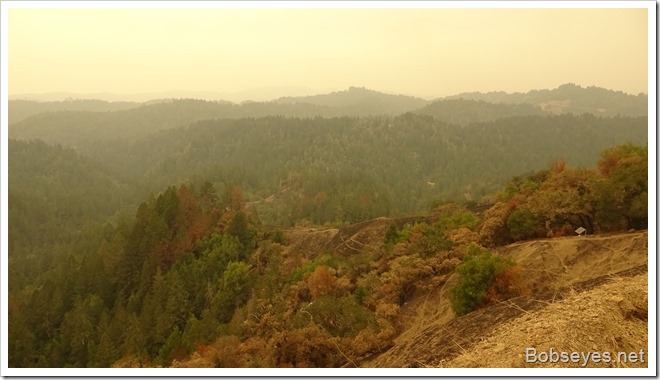 Robert wasn’t home but his wife and three dogs were so I stopped and chatted for quite some time with his wife. She said Robert had gone back to work so I missed him.

Headed to the Hermit’s

I wanted to go over to the Hermit’s place where I was yesterday and work on digging out his spring.

I headed down this road to get there. The fire burned fairly hot in this area and killed some trees. 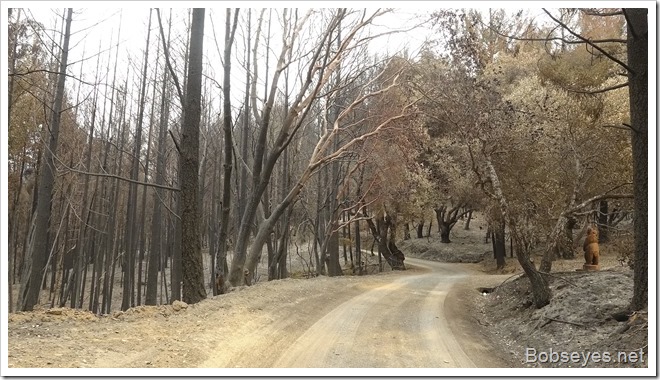 Just past there I ran into this guy in a park truck sharpening his chainsaw. We had a nice chat and I continued on down the road. 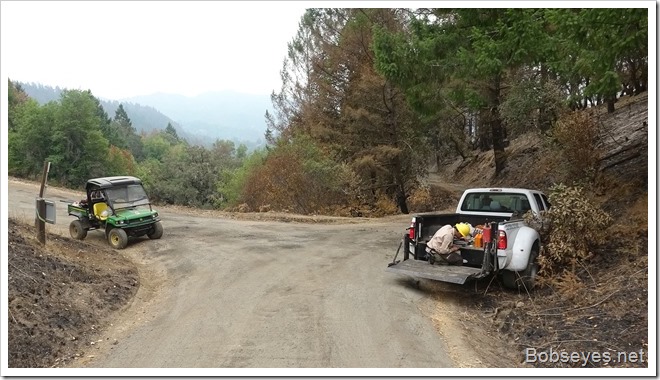 All the big trucks and bull dozers drove up an down this old paved road and pretty much chewed up the old pavement that was mostly shot before the fire. I think maybe they’ll get some new much needed pavement out of this fire. I could see more state park workers up ahead. 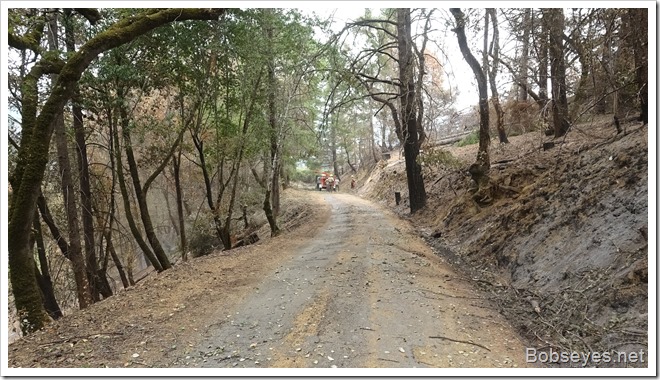 I rode up and stopped to wait for them to see me and stop chipping for a moment to let me by which they did.
The lady on the right was running a tree pole chainsaw and doing most of the work. Well she cut and the guys picked stuff up and put it through the chipper. They were working on cleaning up the debrie and the road and trimming tree limbs back. 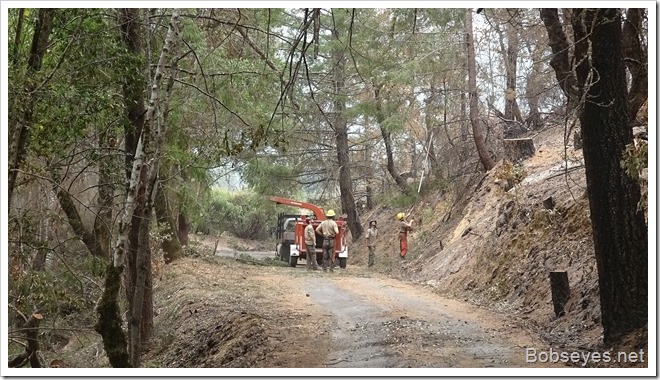 They put yesterdays spot fire out

I turned onto the Hermit’s road where I saw the spot fire flaring up and had the trouble with the state park jerk yesterday.

The spot fire seemed to be out with no smoke as I rode on by and up to the Hermit’s place.

When I got to the Hermit’s place I sat down for a break as the  smoke in the sky was making everything look yellow and I wasn’t really in the mode to shovel dirt and get all dirty so I sat and just had a nice break in his yard. He’s still not home.

So after a good sit I headed down the hill towards my  house riding through the park as it was the shortest way home.

Catching up on sleep

Since I didn’t sleep well last night I got horizontal for an hour or so.

There wasn’t much daylight left as I got a late start. I let he chickens out into the yard to graze. When I went back to check on them these wild quail where feeding with the chickens. 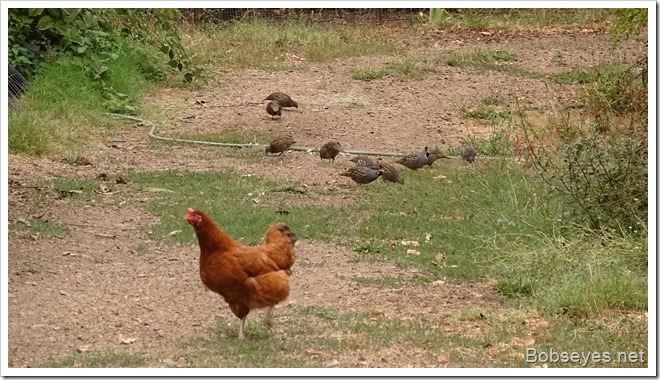 Just before dark I checked on the plums and prunes I had been drying and some were ready to pick up and bag. 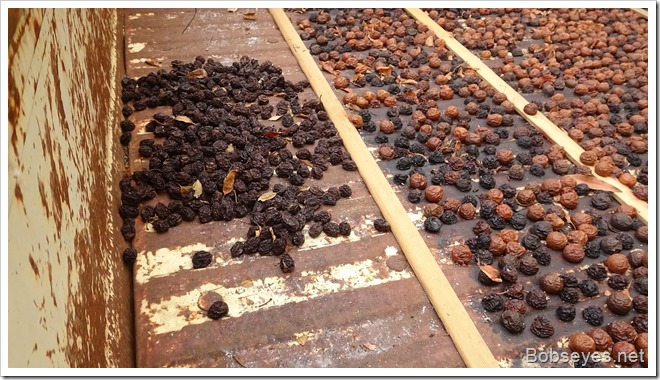 I bagged all these prunes and plums which are good to have around during the winter months when there’s not much fresh fruit around. 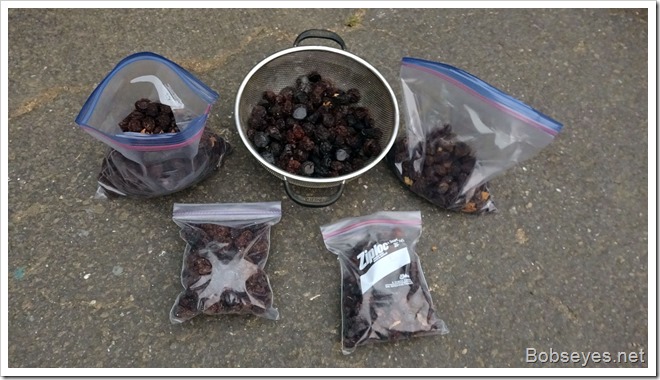 I’d been looking through some old photos I collected from the internet the other day and I thought these two were of interest.

They are both of the same area looking up river at Monte Rio in the old days before the big bridge was installed. Now a days the beach is on the other side. Note the fact that all the forests in this area have been clear cut. 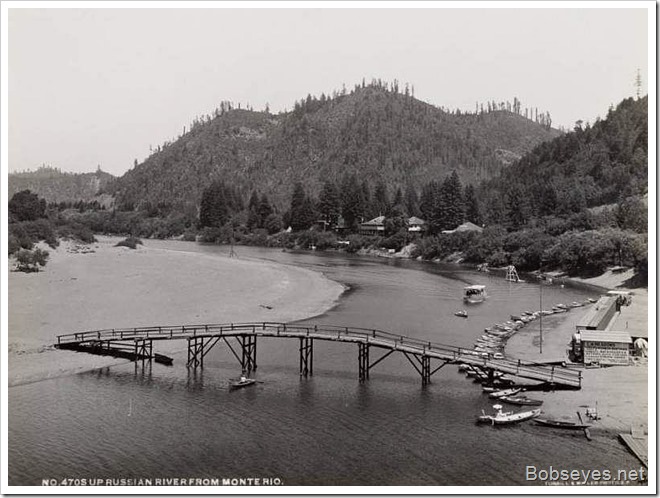 This is likely an earlier picture of the same area when they were using this ferry to cross the river. Most of the hills have been clear cut as was Guerneville and Occidental and most of this are. It’s grown back nicely and  most people wouldn’t know this forest was once clear cut. 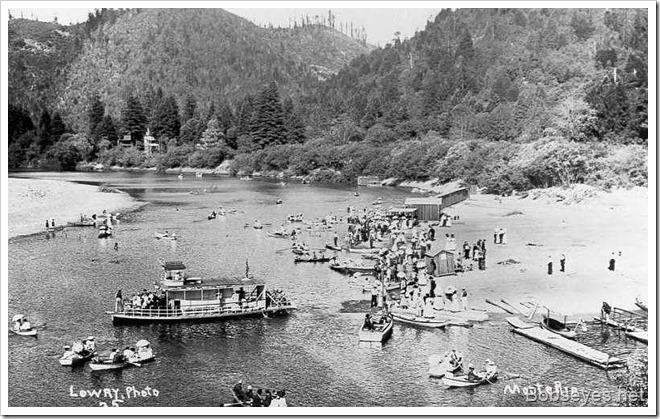