I heard a knock at my door this morning, almost noon. Dominique said I should get up and get some pictures of the big redwood tree limbs that fell on my brother Tom’s gate. It was pouring cats and dogs out there but it was time to get it going anyway. No power of course.

So I got it going and went out and looked in the bucket which is my rain gauge as those little things you get at the store are worthless around here.

This bucket is 15 and a half inches tall. There was one inch of water in it from the storm start yesterday about dark. Now it has only three inches to go to the top. That means this storm has dropped 13 and a half inches on us so far. Great. :O) 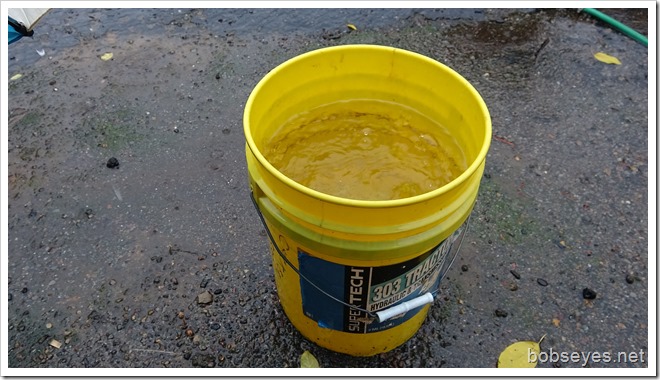 I went over to my brother’s to see what was going on. Dominique was pointing out some of the big redwood limbs that fell. 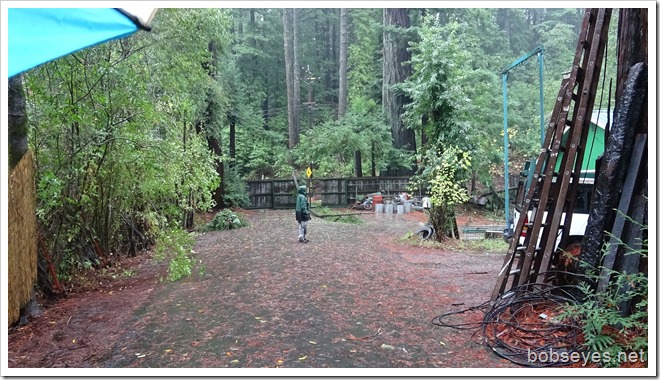 Big redwood tree limbs are pretty big and can do a lot of damage when they fall off the big tree way up there as they are pretty tall too.

A direct hit on Tom’s gate. 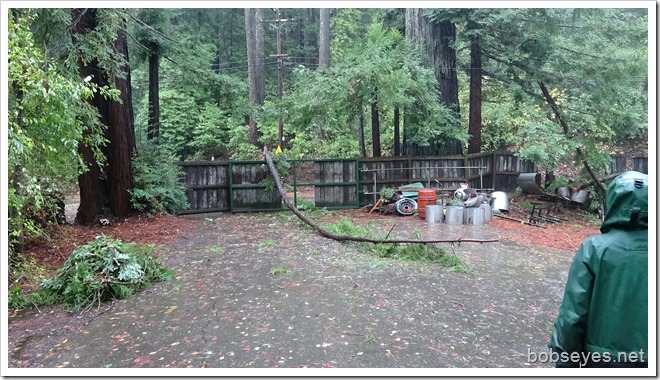 I walked out on the county road to see what Tom was up too. That’s a big tree alright, one of the originals that didn’t get cut down in the early days. 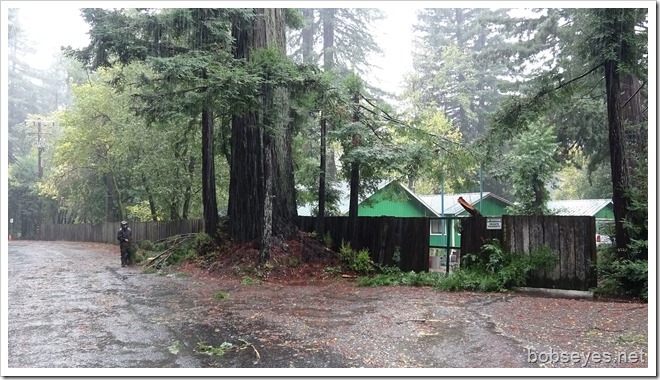 Tom was working on getting some more limbs out of the way. He’s already moved branches off the road so cars could get by. 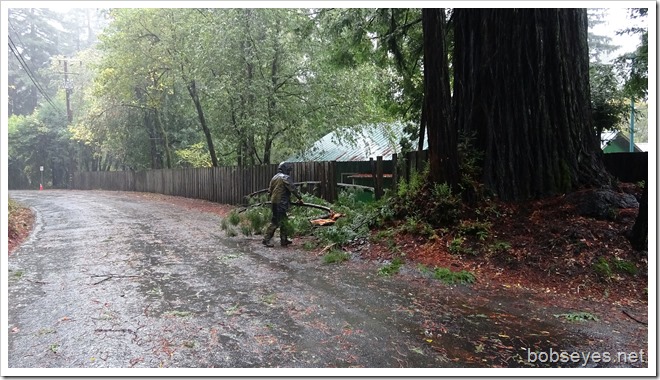 He had his chainsaw and was cutting up and removing the big limbs. 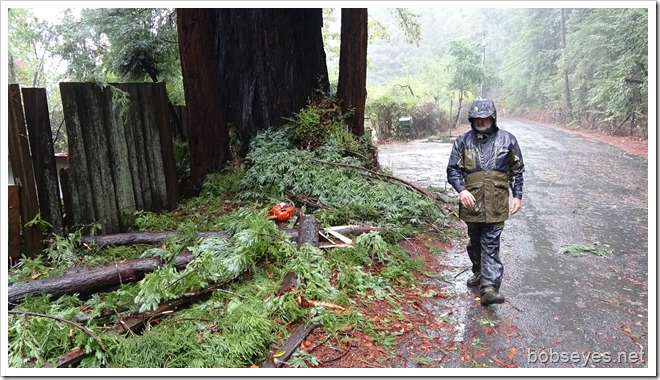 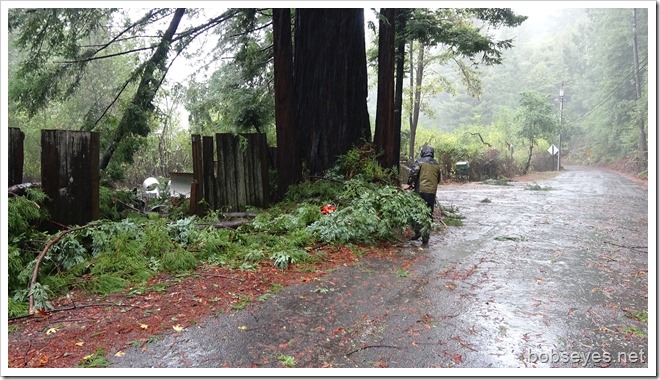 The tree did a job on his wooden fence. 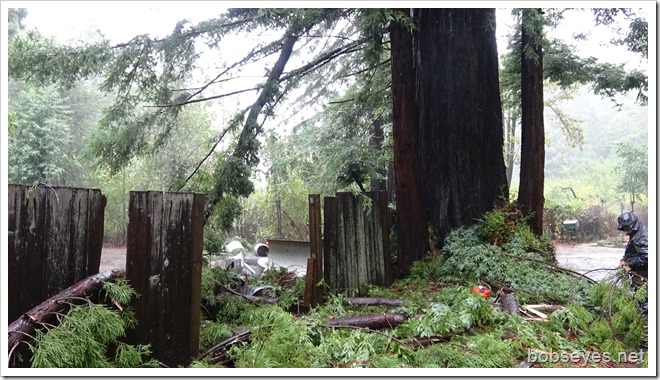 And his gate has a steel frame but it knocked his boards off and broke them up. 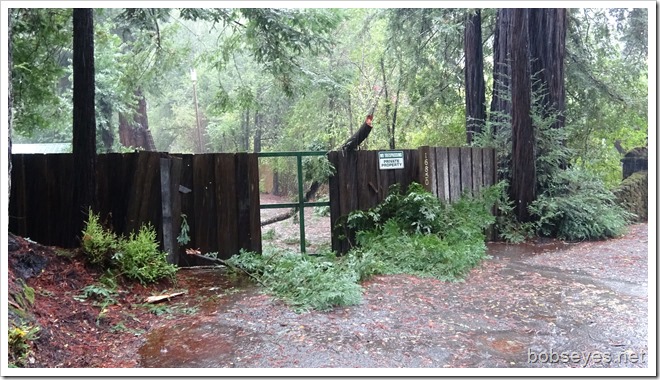 I walked over to the creek that flows down between our two houses to see if there was any water in it yet as yesterday it was dry.

There’s lots of muddy water in there now and it’s flowing good looking up the creek from the old bridge. 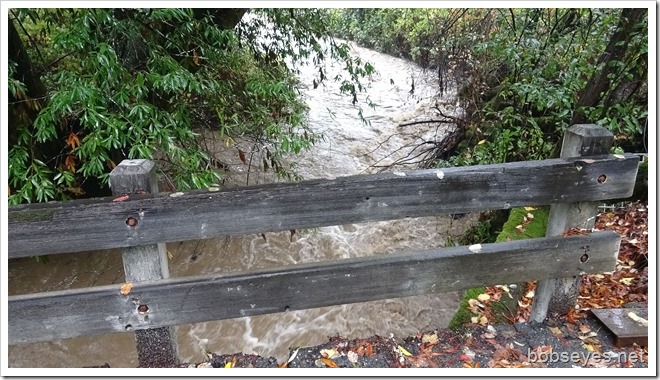 And this is looking down the creek,  my house is on the right. No problem with flooding here, as the water goes down the creek fast. Those guys down stream better watch out.

When I checked back to see how Tom was doing he was moving big branches to get them off his fence.

I went back to my house and cooked up something to eat and had a nap.

Another inch of rain

When I looked out in the bucket about 3, it had gained another inch for a total of 14 and a half inches and it’s still raining but slowed down some. 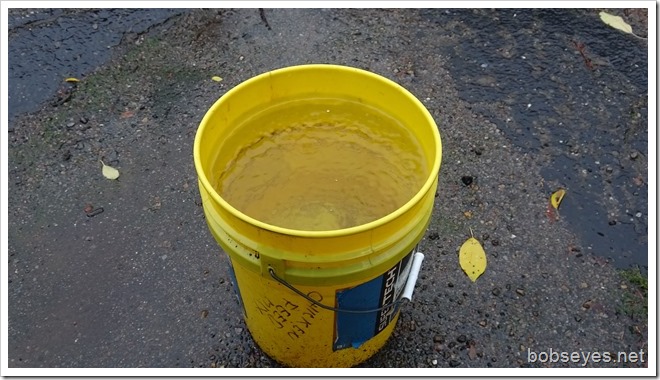 A bit later Tom came by and wanted to prep the generator we share to get it ready to go as we didn’t have any power nor did I have a phone and no internet either.

We gassed it up and put some oil in it. He came back in about an hour and we tried to get it started. He pulled a few times and gave up, bad back, and then I took  my coat off and gave it  my all and after a few pulls it started up. This generator is hard to pull. One can just barely pull the rope to start it. We are going to have to get an electric start one pretty soon. 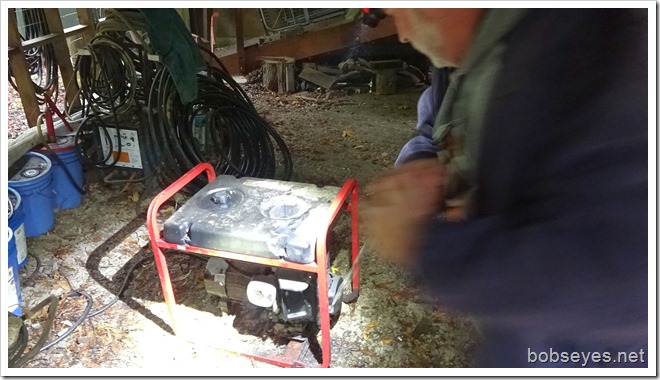 I’d not let the chickens out today as it was just raining too  hard. So I let them out when the rain slowed up a bit. They took off for the yard seeming to love the rain. 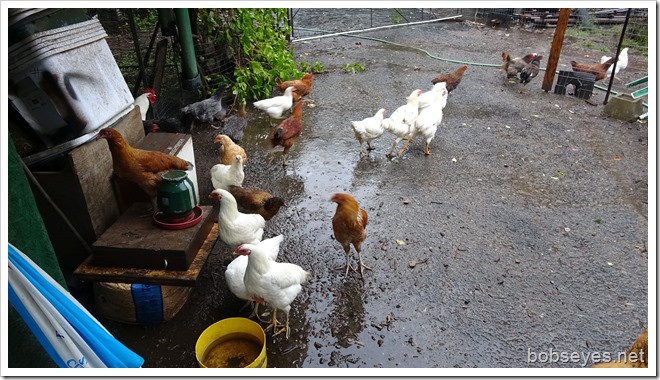 It will likely be a couple days before they get my internet fixed up as the wire is down. I should  be able to post at my neighbors who still has some internet.

I think we are expecting more rain, such a nice way to end a drought.

I hear the state park is going to open up this next Friday. It’s been closed for rehab work since the forest fire about a year ago. Lots of people should be happy about that..